The Evangelion Rebuild saga ends with a grand bow. 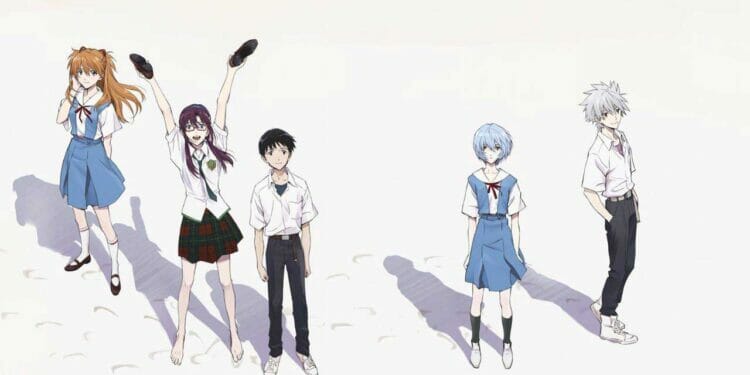 After 12 years as a film saga and roughly nine years since the previous entry, the Evangelion Rebuild series comes to a close. It’s been quite the journey for this reboot of the iconic mecha series. What started as a mere retread turned into something altogether surreal and sublime.

The fourth entry, confusingly titled Evangelion 3.0+1.0, is a fitting finale. It expands on much of the grander ideas of the films while also becoming so much more. Unlike the first Evangelion Rebuild movie, this isn’t just an End of Evangelion redux.

The Dark Days of Another Apocalypse

When we last left the conflicted hero Shinji Ikari, he was a mess. Just when it seemed he was forming a real bond with Kaworu Nagisa, Shinji had to watch his friend die before his eyes. Even though Shinji ultimately succeeded in his mission of preventing the end of the world, he still slips into a bitter depression.

He is joined by his fellow co-pilots of Asuka and Rei. Their Evangelions downed and the Wille busy, the three of them seek refuge in a village near Tokyo-3. It is there where they meet up with friends from their past that changed greatly with different priorities of survival.

Meanwhile, Wille is busying themselves with holding back Gendo’s plans to cleanse humanity. Sakura Suzuhara aids in holding off the forces of NERV. Ritsuko and her scientist cohorts hold back the supernatural corruption of the Earth. But how long can it last?

The film will hold obvious comparisons to The End of Evangelion. Thankfully, this picture succeeds at adding more than just replicating similar imagery and sentiments. In particular, it’s the smaller moments that make this picture whole.

I really dug the entire first act which slows down enough to focus on the trio of Shinji, Asuka, and Rei. Shinji wallows in his sadness and grief while Rei tries to find her individuality. While Asuka bitterly sulks and longs for combat, Shinji and Rei attempt to connect in the village before tragedy strikes once more.

By the fourth act, the film becomes almost entirely abstract but also more introspective. Shinji actually has more meaningful exchange with his father than in every movie and series combined. The reveal of Gendo’s grief and honesty in his brashness makes for great drama amid giant robot battles.

Speaking of robot battles, the Evangelion skirmishes are all over the place. In terms of both animation and staging, the one word that comes to mind is chaos. There’s just so much going on and it is often hard to tell just what is going on in certain scenes.

Take, for example, the scene of Sakura trying to defend the Eiffel Tower from NERV’s forces. She manages to push back an entire army by using unorthodox robot appendages and various battleships as shields. It’s a clever scene but so fast-paced and shaky with the camera that it’s downright incoherent.

The same goes for just about every mecha battle. There’s so much metal and flesh clashing in surreal landscapes that it can be hard to associate just what’s going on, let alone who is winning. It is almost by mercy that the fourth act goes for an almost dreamlike environment that is more pleasing to the eyes.

Whereas The End of Evangelion was built more for shock and a depressive bad end, Thrice Upon a Time seems to evoke nearly the opposite. It’s not just that the film ends on a more hopeful note with Shinji becoming more confident. There’s more content closure at play.

Gendo’s bigger plan is to elevate humanity to a state of godhood. Even though this can be viewed as immoral since it means robbing humanity, Gendo is doing so out of personal grief. Every character has a motivation for what they’re fighting for, making the war one more of ideology than good versus evil.

Throughout the film, various characters will act out of emotional actions. Side characters will try to assassinate Shinji for failing to prevent Third Impact. Others will confess more of what they have at stake, as with Misato struggling with how she pushed away her son.

Between Animation and Reality

One aspect that has carried over into this entry from the previous finale has been the blending of mediums. In this case, however, there’s a more subtle meta nature. There’s nothing as overt as showcasing a live-action empty theater to reflect how empty our world feels without us.

There’s a great sense of pulling back the curtain when Shinji seeks closure amid a movie set. The facade is dropped to let us in on how clear it is Shinji is trying to wrap up his own mental blockage. All that being said, we get that jarring moment in the end when animation bleeds into reality, almost as if to turn to the audience and ask what we will do next.

Conclusion: Evangelion 3.0+1.0 Thrice Upon a Time

With its ups and downs, I must admit that the Evangelion Rebuild saga ends on a pleasing note. It manages to be just as intense as the previous entries while touching on something more. It’s surreal yet thematically focused and action-packed yet quietly meaningful.

Writer/director Hideaki Anno has been developing Evangelion for such a long time. His series has been done and redone multiple times as he just couldn’t leave it alone. But Evangelion is to end here, it’s perhaps the best note for denouement in an overall rousing mecha sonata.

What did you think of Evangelion 3.0+1.0? Did you watch it on Amazon Prime? Is it the best Evangelion movie? How does it compare to something like Mobile Suit Gundam: Hathaway? Let us know in the comments below.

A fitting conclusion for Evangelion in a manner most surreal, thrilling, and contemplative.