Gundam heads back to its roots with conflicted characters and politics. 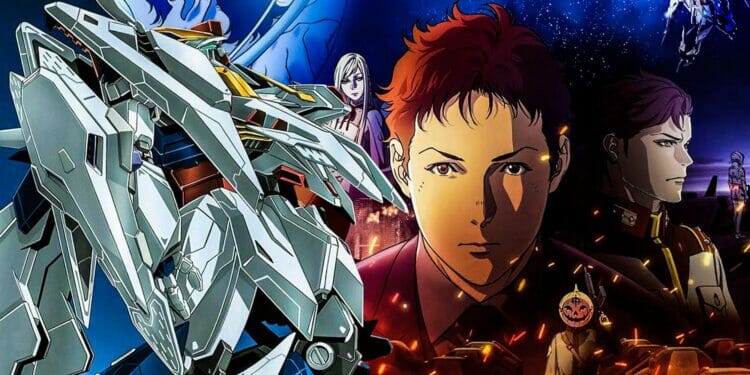 The Gundam franchise, created by Yoshiyuki Tomino, had been feeling like it lost its way for the longest time. The days of a space opera mixed with gritty war didn’t seem to be in the cards. In place of Gundam’s continuing story, we received pale spin-offs and commercial-based branding.

Hathaway, however, is a fantastic return to form. This film not only goes back to the Universal Century timeline but finds unique aspects of war and accountability. The final result is possibly the best Gundam movie ever made.

The good news is that the film doesn’t require a hefty dose of Gundam lore. The film acts as more of a direct sequel to Char’s Counterattack. This is mostly because the film follows the conflicted character of Hathaway Noa, son of White Base Captain Bright Noa.

Noa finds himself during a difficult political time. The Earth Federation is starting to become far too authoritarian after they had defeated Zeon and Char’s rebellion. Pushing back against the Federation is an insurgency group known as Mafty.

What the Federation doesn’t realize is that Hathaway is the leader of Mafty. He does his best to conceal this info but it becomes harder among the people he meets. His acquaintances on his trip to Earth include the mysterious Gigi Andalusia and the cunning military strategist Kenneth Sleg.

Hathaway spends most of the film trying to conceal his identity amid terrorist attacks on the Federation. Some of them are orchestrated by his group and others by outsiders posing as the group. The film opens with one such poser cell on a flight from space to Earth.

Hathaway is aboard this flight and it’s a great way to showcase of just how conflicted he is in his mission. He not only makes the tough call of foiling the Mafty posers but risks being outed by the presence of Gigi and Federation Officer Sleg. Sleg believes Noa is still loyal to the Federation while Gigi isn’t sure of him.

As Hathaway tries to maintain cover, he finds himself questioning his every move. While still being haunted by the past, he’s posed with tough speculation of the future. There’s a brilliant bit where he has a mild debate with a taxi driver about the fate of the planet and the grand plans of Mafty.

Subtle Use of Mecha

There’s a rather sparing use of the iconic giant robots in this Gundam entry. This aspect is a great way to treat the robots more as weapons in a politically motivated war than being some grand depiction of heroes defeating villains. There’s a classic Gundam feel to this presentation.

When the mecha finally do come out to play, after nearly half an hour of them being missing, they have a real presence. The robots feel massive and destructive with the real clunky and powerful nature. The perspective of mostly witnessing them from the ground really sells that terrorizing power.

We also get to see mecha in scenes of intimidation, where giant robots are used to hassle refugees. Scenes like this are a great depiction of Hathaway’s struggle in a dangerous world. He’s not just fighting thoughts of terrorism versus environmental assurance but a monolith of a military power structure.

The most refreshing aspect about this film is that it requires little if any Gundam lore knowledge. The film takes place after the events of Char’s Counterattack and even highlights a few scenes. Most of this information, however, is not essential.

Hathaway is a film that lays out most of the crucial aspects without much explaining. Passing mention is made of the Jedi-like Newtypes and the failure of Char’s insurrection. None of this info is needed to appreciate Hathaway’s grander tale of fighting for against authoritarianism and environmental degradation. It’s just more of a bonus.

The central concern of Hathaway being a grey-area terrorist and the overarching reign of the Federation keep’s the film focussed. The stirring nature has more time to brew with the thriller’s philosophical insight rather than getting lost in adhering to the Gundam legacy.

The animation is some of the best ever for a Gundam film. The little details are what sell this sci-fi thriller so well. Everything from a decadent hotel to a space shuttle flight is presented with extraordinary detail.

The character designs are also quite stunning, as with Gigi having that perfect mixture of beauty and aloofness. As for the mecha designs, they’re about par for the course but the strong use of lighting makes them more imposing.

Hathaway has everything that makes Gundam so great. It features some stunning sequences of giant robot battles while also posing a conflicting war with no clear moral high ground. The conflicted characters make for great drama and more than just a tale of who will beat who in a war of robots.

As far as Gundam entries go, I’m willing to go so far as to declare this one of the best Gundam films ever made since the original trilogy. And since this film seems to be the first of a trilogy, it’s likely to become the superior trio of Gundam movies as well.

A beautiful and poignant Gundam thriller that is easily one of the best Gundam movies ever made.