A video game film with more smarts than references. 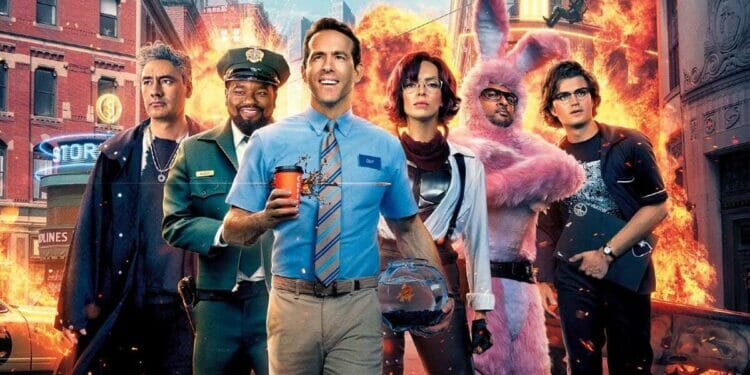 A concept such as Free Guy doesn’t seem all that new. The notion of conceiving that our world may be a simulation goes as far back as the sci-fi speculations of Phillip K Dick. It could have easily been a mindless romp while aping off the lucrative gaming crowd.

Thankfully, this is not the case. Free Guy is less of a parody than it is a satire of video games. It not only has the guts to question the industry but try to find something more. There’s a lot to consider in this film of big action and laughs, though it has plenty of all that.

Guy (Ryan Reynolds) is little more than a bank teller but lives a happy life. He wakes up every morning in his mundane apartment with excitement. The coffee tastes as great as the weather looks. His urban life is a paradise.

The only issue is that his life is in that of a video game resembling Grand Theft Auto. Car chases and muggings are common in the streets. That’s little concern for someone like Guy, having become accustomed to this daily chaos.

Guy, being an NPC, believes he’s not destined to be like the sunglasses-wearing players. The populace recognizes their visitors as being higher powers. But when he becomes smitten with the avatar Molotov Girl (Jodie Comer), he becomes inspired to take a shot at…well, shooting others.

Guy has yet to realize that he is merely a pawn in far more than an open-world simulation. Molotov Girl is in reality Millie Rusk (also Comer), a developer seeking something valuable in the game. Her goal is not some hidden item but a hidden level that can prove her code was swiped by a massive gaming corporation.

The game’s studio of Soonami Games is run by the egocentric Antwan (Taika Waititi). His company is not seen as misreading Guy’s potential but exploiting his appeal. Guy’s life and the world rest entirely on how much Antwan feels he can reap from his product.

Working with Millie is her partner Keys (Joe Keery). He sold off his experimental game of Life Itself to Antwan and now feeds the beast that killed his dream. He may have a shot at getting it back if he can secretly work alongside Millie while keeping his head low in the office.

A One Guy Army

Guy’s discovery of his world being a video game manages to be surprisingly profound. At first, he’s amused at being able to take control and shoot other players. At the same time, he realizes that this is a power he can use to reshape his entire world.

The fact that Guy doesn’t realize he’s inside a video game makes him a uniquely naive and sympathetic character. When understanding he can be more of a vigilante than a victim, he makes a valiant effort to clean up the streets. When comprehending his placement in a video game, he’s crushed with existential dread.

More Than a Game

It should be noted that the script, co-written by Zak Penn (X-Men), is quite believable in its portrayal of the gaming world. Guy’s game is populated with familiar mechanics and believable mechanics when seen through a screen. It’s not just a wild smattering of references, favoring a more relatable world.

This adherence to gaming conventions allows the film to soar past mere referencing. The story actually manages to portray a rather compelling satire of the absurdity in gaming culture. Everything from questionable business practices to the politically incorrect nature of inhibition-free gamers is given the scathing it deserves.

It was refreshing for a film such as this to stress how technology can be more than just a distraction. A lesser film would have condemned online environments altogether. Thankfully, the film becomes a better highlight for the benefits of such tech.

Guy is later discovered to not only be more than just an NPC but also a vessel for expressing love. His presence in the game allows a romance to blossom between Millie and Keys. It’s refreshing to see a film actually use technology as more of a tool for expression and less the Pandora’s Box we keep trying to shut.

It should come as no surprise from director Shawn Levy (Night at the Museum) but the film is remarkably beautiful. The abundance of special effects for fight scenes and gaming mechanics is clever and varied. Certain scenes feel absurdly overblown while others feel like GTA-style screens.

The unique usage of spawn points, arsenals, and monetary management are minor yet crucial details. The gaming world feels whole and not just the product of some executive struggling to string together terms and references. It’s far from the more fantastical techno-thrillers of yesteryear.

The outside world is also given a fair bit of relatability. This is mostly seen in how Soonami Games is run with a toxic and clashing work environment. The timing couldn’t be more perfect with the recent allegations against Blizzard Entertainment.

In what is sure to be the most cringe-scenes of the films, various real-life streamers make cameos as news cycle talking heads. This aspect honestly didn’t bother me. Honestly, who is more likely to talk about gaming news such as a rogue NPC? CNN and Bloomberg or the likes Pokemane and Ninja?

Free Guy finds more to explore in its concept than just its fun video game parody. Satire was not something I expected to find in such a film. And, wow, is it a refreshing change of pace from the usual cynicism of taking aim at gaming and technology.

There’s far more for the brain to munch on with such a concept. While still being very geek-friendly with its pop-culture Easter eggs and such, the grander theme is more compelling than the cameo of a certain MCU actor. It’s the intriguing gaming critique that manages to have its geeky cake and eat it too.

Did you see Free Guy in the theater? Was it funny or not? How does it stack up to The Suicide Squad? Let us know in the comments below.

A rather surprising video game satire with just as many brains as it has geeky brawn.

How slots have remained popular throughout the years