by Endyo
in Game Reviews, PC Reviews, Xbox One Reviews
1

I’ve never previously played a Gears of War game. At least not the campaign for one. Fourteen years ago, I did play some local multiplayer with friends, but I think it’s safe to minimize the relevance of that. Now that I’ve been given the opportunity to dive into the latest entry in the series, I thought it would be interesting to give a perspective for how well the game stands on its own. 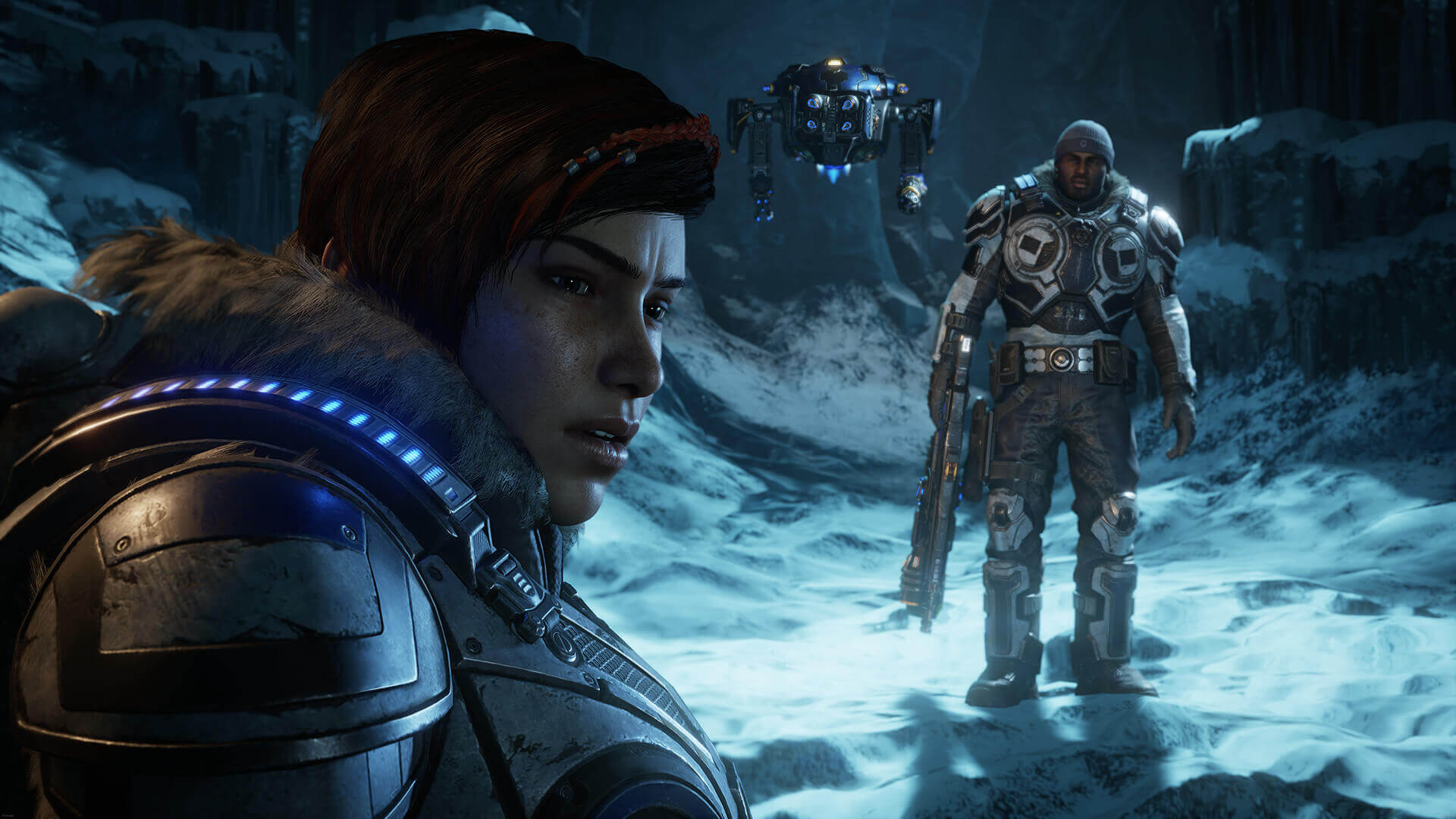 The first thing I encountered launching the campaign was a recap of the events that happened in Gears of War 4. Little of this connected with me until Marcus Fenix appeared on screen and the now-iconic thick-limbed character’s gravelly voice spoke up. It made it seem like the story had just begun from the fourth iteration of the game. However, after checking a more extensive recap video somewhat buried in the menu, I realized that a great deal had gone on before that.

It seems like the developers of this franchise made some very conclusive story elements in previous games. At this point, you are facing off against what is apparently the third group of humanoid monster-creatures to climb up out of the ground. From my perspective, it seemed a little silly and a bit funny to have this taking place across one planet, but it wouldn’t be the first video game to do it. Besides, outside of the numerous character callbacks and references that I didn’t get, little of the previous story was referenced.

The story that does occur across the breadth of Gears 5 feels sparse. The first part of the game has you trying to launch Hammer of Dawn satellites to help defeat this new threat. Then you spend a good chunk of time trying to figure out what’s going on with the main protagonist, Kait, and how it all connects. By the time you get back to the main task of satellites, the game is starting to wrap up. Taken as a whole, not a lot happens within the story, and it still manages to end with a big plot point hanging. 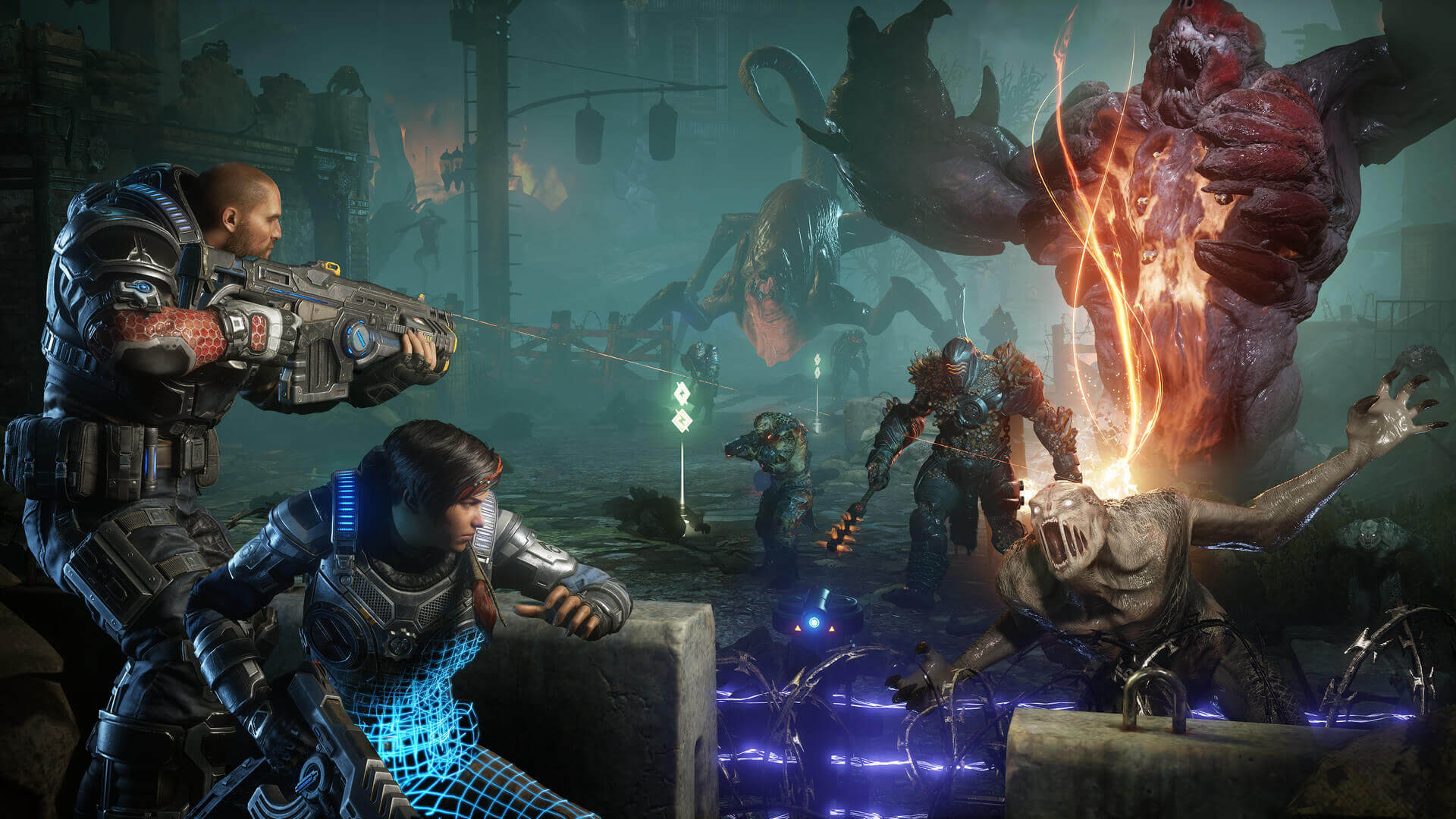 Cover shooting mechanics existed before Gears of War, but saying they “made them popular” is a massive understatement. It’s the core of the gameplay from top to bottom. You exist in a world covered with waist-high barricades and you’ll be diving between them throughout Gears 5. If it wasn’t for the explosive action, this fun of this probably wouldn’t last the duration.

Luckily, unleashing a torrent of gunfire on these various enemies is pretty fulfilling and just challenging enough to keep you on your toes. Even at the more moderate difficulty levels. The variety of weapons and enemies keeps things dynamic from start to finish. There aren’t even that many different types of either in reality, but the distribution is well balanced. You may encounter a lot of aggressive melee enemies where a shotgun is best but down the line face snipers requiring long-ranged weapons. The design choices always seem to work well.

There’s also a wide spectrum of tactics employed by these enemies. The bulk will use the same assault rifles and machine guns you do, but some will close quickly to melee or leap on top of you. You can’t just park behind a barricade and take advantageous shots the whole time, or at least not for long. In most cases, someone or something will motivate you to move or change tactics to take them out. The boss fights take this design even further – making them a little tougher at times. 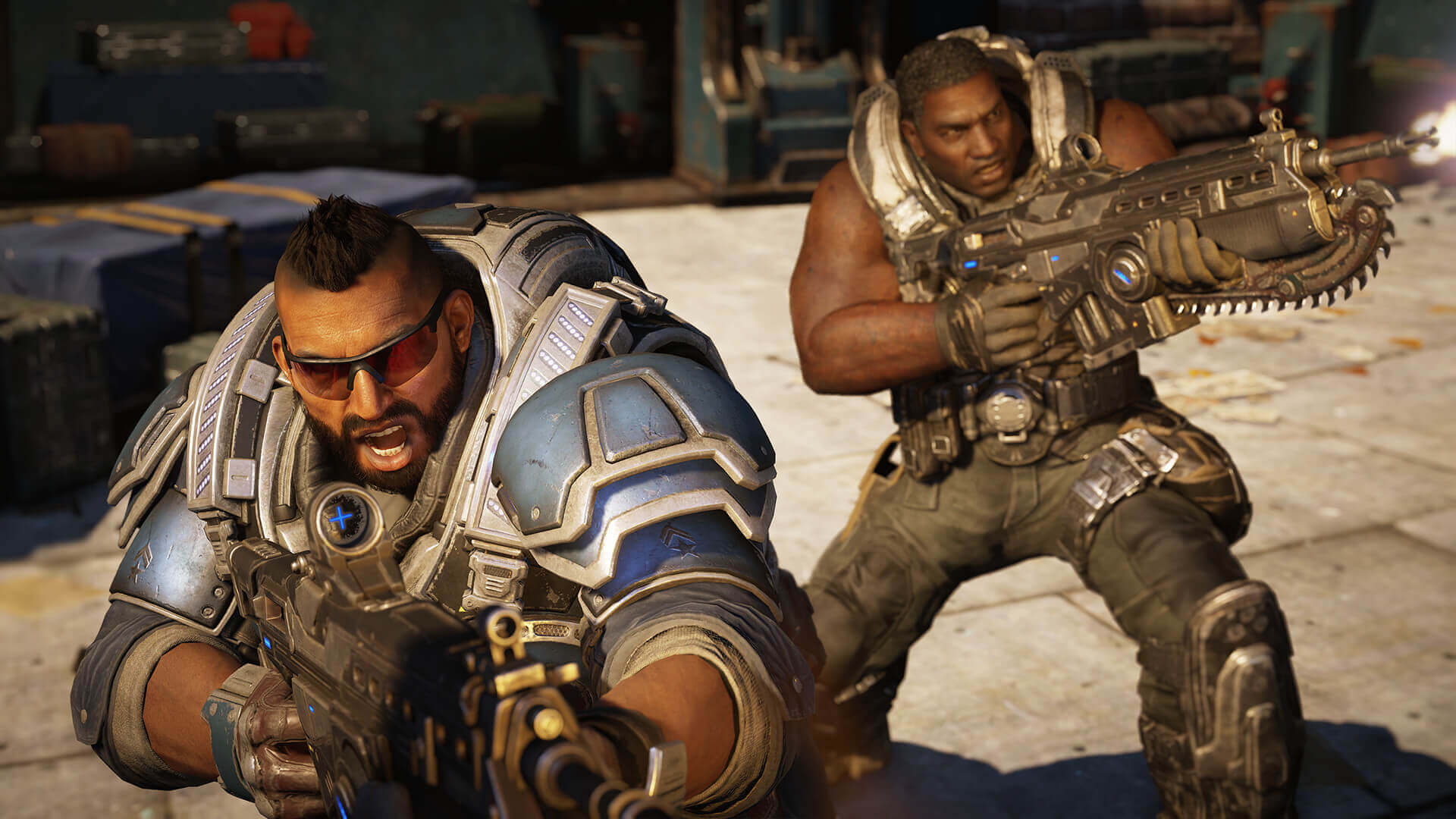 I’ve noticed some games seem to be adopting sections with partially open worlds. Gears 5 does this with two separate areas, both making use of a special sled vehicle. The fact that this sled is wind-powered and the wind is perpetually at your back never stopped bothering me, but it does create a visually appealing method for getting around the terrain. The problem is though, that this doesn’t add much to the game.

If you ignore the side quest portions, the only thing you do in these open-world areas is travel from A to B without little to no interruption whatsoever. While it can be entertaining and somewhat rewarding to venture off to the tertiary markers, I don’t know if it was worth padding out the game in retrospect. All you gain are some more skills and skill points to distribute for Jack, your floating robot companion. He’s useful in combat, and a great way to get a third player in your co-op game, but I often found myself forgetting he existed while playing. Though I admit, he may be more useful in harder difficulties.

If it wasn’t for perhaps one or two moments in the second “open world” area, I could easily see the entire portion cut out and replaced with a couple of the ‘squeeze-through-the-gap’ transition sections used elsewhere. The open-world seemed like a fun addition early on, but it didn’t take long to see how it was just a facade for disguising optional content. 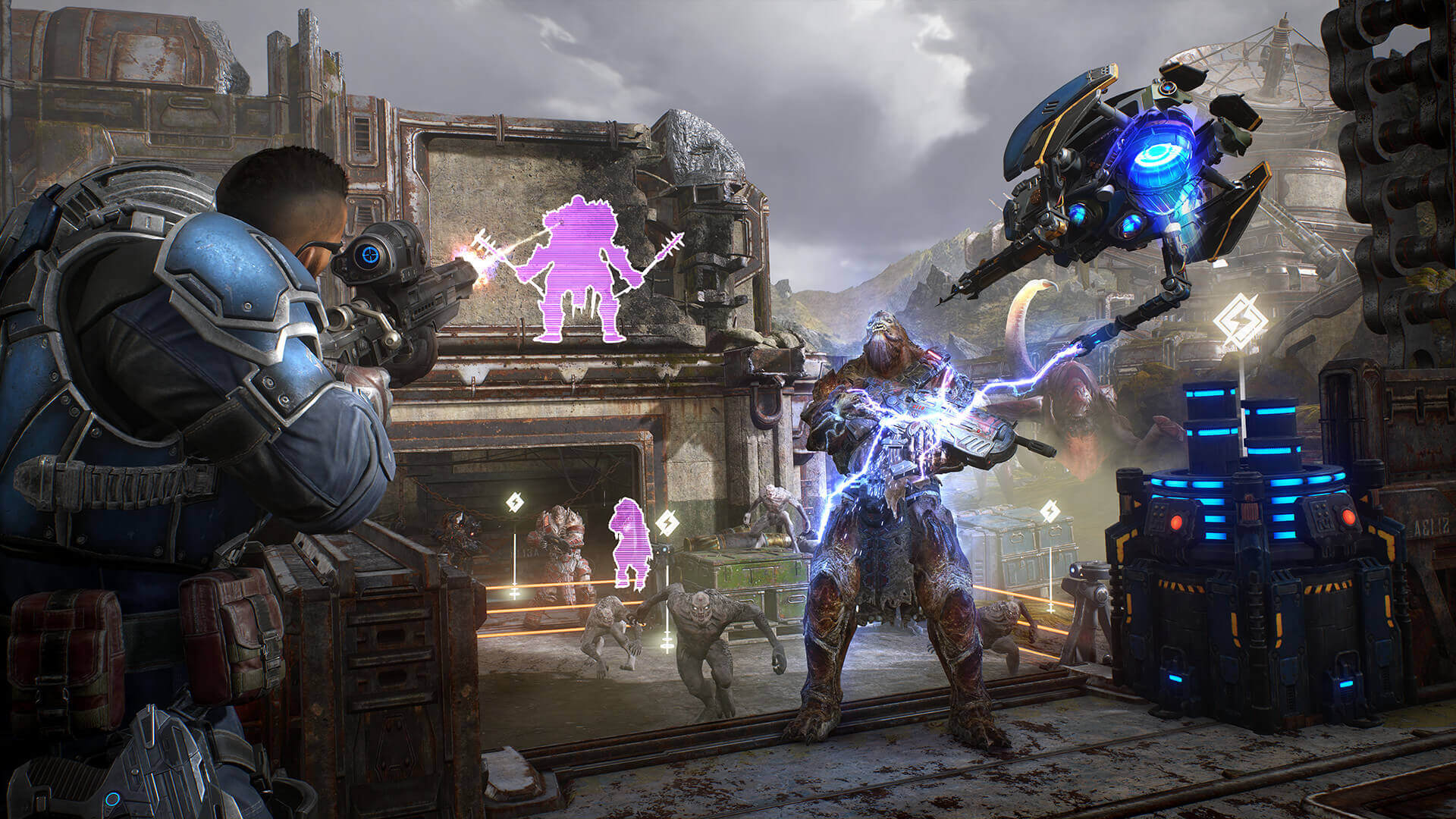 Familiarity with the Unfamiliar

It was fascinating that I could jump into the fifth iteration of a series and so immediately become familiar with the pacing and the gameplay. In the 14 years since I blasted some of my friends in split-screen on an Xbox 360, the Gears franchise has changed very little. I assumed by now they’d be taking additional experimental steps rather than just adding an inconsequential open world section.

Maybe that’s the point though. The appeal of Gears games like so many others seems to be having familiar gameplay while expanding the story. It wouldn’t be the first franchise to do this. Assassin’s Creed did it for numerous games and Call of Duty is still doing it to this day. What draws people back every time is a chance to see the next big spectacle. The next giant monster on which you have to shoot weak points or the next explosive gibbing of some gooey enemy. If your fans are still buying and enjoying the games, why change it?

It does make it a bit lackluster for me, though, since I’m only just trying it out. I did find that the multiplayer was appealing and challenging distinctly from the campaign. It’s not enough to keep me coming back daily, but enough to try it again. However, despite being decently entertaining throughout, Gears 5 ends up feeling like more of the same. If I’m saying that without playing the other four campaigns, there must be some underlying issue with the design. Then again, the sales don’t lie. People love this franchise and I guess we’ll check back in for Gears 6.

If you’d like to see more reviews check out our latest with Monster Energy Supercross 3 and Journey to the Savage Planet.

Gears 5 revisits the time-tested cover shooting mechanics that define the series with the addition of open-world sections and a player-controllable robot as a third character. Even with these new additions, the game feels as familiar as ever, even for someone who hasn't played previous titles in the franchise.

such a great game