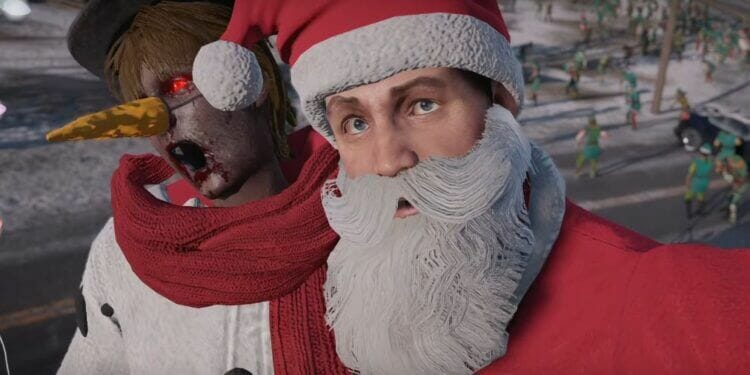 I love the Holidays, I love the lights, the food, the decorating, the ugly sweaters and the parties. Sadly this is a unique year to say the least and a lot of my Holiday enjoyment has been ripped from me so that I can make sure my Mom is safe. We’ll have minor decorations this year, no parties, lots of food and sadly no mall visits. I would love to go to the mall and just look at the decorations and the people milling about, can’t do that now. So I had to fill a Holiday void for myself, and I found a few games that actually take place during the Holidays, much to my surprise.

I was flipping through my Xbox One games and saw Christmas lights on the cover of Dead Rising 4, one game I’d not even cracked open yet. So I popped it into the system, waited the appropriate day for everything to install and download and hand my hands back on Frank West. I have pretty much all iterations of the original games, even the Dead Rising: Chop Till You Drop on the Wii. So, oddly enough I’m a huge fan, that’s never actually seen one of these games to completion. It looked like Dead Rising 4 will be my first victory.

The game starts innocently enough as Frank West and his protégé Vicky Chu investigate a military compound near the locale of the first game, Willamette, CO. Things go south, Vicky ditches Frank after they get split up and soon Frank is hiding from everyone, but not well enough. Brad Park, a member of ZDC, convinces Frank to help investigate the second major outbreak at Willamette. This outbreak happened on Black Friday, so I get to see my decorated mall, virtually and filled with the undead.

What surprised me the most about this game what that you leave the mall in this one. I dabbled in Dead Rising 3 and didn’t really enjoy being outside of the mall. I’m sure that when I go back to the prior game I’ll enjoy it a bit more. I enjoyed being trapped in a mall because there we’re hundreds of zombies waiting to bite you. Dead Rising 4 made me use that to that mechanic which is a good thing. Now I can beat number 3 soon.

To me, making this game so open world or massive makes it more difficult to get everything done. I didn’t save nearly as many survivors as I did in prior games. As I was driving through the huge hoards of zombies an “event” would pop up and I would see the copious amounts of zombies and my tiny weapons stash, so I did drive by a lot of them sadly. I’ll go back now that I’ve completed the game, but I’m nervous because I didn’t see a NG+ option, so I’ll have to hunt for that.

Capcom Vancouver did add some neat mechanics that I enjoyed, actually it was one BIG mechanic. They gave Frank West an Exo-Suit. This Exo-Suit help immensely when you get one, you can slap the shit out of the hoards in this giant suit. Plus you can make add-ons to it from the environment or actually find weapons that can only be used with the suit. This really made some of the missions in the game insanely fun and OP, I loved it.

Since this game has been out for several years Capcom has given us an IMMENSE DLC pack for it, you can play Frank Rising, which is where I sunk most of my time. It’s always fun to play as the zombie from time to time, check out my Stubbs the Zombie retro review for more zombie goodness. This DLC isn’t small, Frank Rising plays almost like a good chunk of the game and I’m enjoying sinking my teeth into it, see what I did there.

Super Ultra Dead Rising Mini Golf is fun, hopefully you have some friends to join you because you can play local co-op and online co-op. I’ve never been huge into golf so this didn’t interest me, maybe when it’s more spring time I’ll get interested in this, but I doubt I’ll play it too much longer.

I know that times are hard and money is tight for a lot of people, thankfully this game can be found on the cheap pretty easily. There is A LOT of content, replayabilty and fun with friends to be had should you grab it. If you’re looking for a game to enjoy the rest of this December you should grab Dead Rising 4. You’ll get to kill some zombies, while humming your favorite Christmas tunes and I can’t think of anything better than that on a cold night.