Spatial audio is something gamers have been utilizing for a while now. It essentially simulates surround sound with regular stereo headphones, with the goal being to aid in games by allowing you to hear better where opponents are.

For a while now Microsoft Windows 10 has supplied this for free, and several gaming headsets have been shipped with built-in virtual surround. However, there’s a new software solution available now from Embody called Immerse Gaming. Immerse Gaming supposedly uses AI as its approach and relies on personalizing the experience to your ear.

We’ve been testing Immerse Gaming for a couple of weeks now and we want to give you our thoughts on this software. We used a Cooler Master MH752 PC USB headset and the HyperX CloudX Stinger Core (PS4 Version).

We’ve thoroughly tested it with the following games:

Setting up the app is actually a bit of a hassle in itself. You first need to create an account and then take a photo of your right ear to link to it. This was anything but easy and we had to take numerous photos to get a good one. Even then, we had to later resubmit new ear photos, though we didn’t really notice any improvement from this so it was even more hassle for little result.

The incredibly difficult setup for this app is definitely something we can see turning away potential customers. There might simply be no way around it though given the app actually relies on your photo to personalize the spatial audio to your ear profile.

This also wouldn’t be a huge issue if the number of photos you can submit weren’t limited. You can only submit up to 5 images per user account. After that, you can no longer submit more images, so you better make sure your first couple of submissions are good ones.

Despite its numerous bugs and jank, Cyberpunk 2077 ended up being one of the highlights during our tests. The game’s immersive audio is already quite stellar and the added spatial audio from Immerse, while not doing anything amazing, helped making us feel like we were right there in Night City.

That being said, it didn’t exactly blow us away. It probably speaks more about Cyberpunk’s great audio mixing than Immerse Gaming. But if anything, Immerse certainly helped enhance what was there, so it seems it was happier when it had a lot of stuff to work with.

We tried Immerse Gaming with both Mass Effect 1 and 2 Legendary Editions and the results weren’t exactly stellar. This might be due to the fact these games are a bit older, but we noticed no discernable difference in spatial awareness. The audio tended to pop a bit too, so it definitely didn’t feel like Immerse did anything for Shepard’s adventures.

Fresh off our Quantum League review, it was one of the first games we tested with Immerse. Again, we didn’t really have the greatest results here. It might have helped a little bit, but whether it made any noticeable difference during gameplay is hard to say.

One thing we did notice however was that the weapons sounded quite a bit louder than normal, almost to the point they drowned out all the other sounds in the game.

DOOM Eternal was also another disappointment. While this may be due to the game’s loud and chaotic gameplay, we didn’t really feel any noticeable benefit from using Immerse Gaming with id Software’s latest demon-killing simulator.

As awesome as it might have been to hear demons behind you and hitting them with pinpoint accuracy, we stilled died quite a lot. So I don’t think Immerse Gaming will help with any Ultra-Violence Ancient Gods speedruns.

Surprisingly, Dead By Daylight actually suffered a bit from Immerse Gaming as it made the audio quality worse. Some sounds were louder than others as well, similar to our experience with Quantum League. It seems Immerse is really keen on just boosting certain sounds that are closer to you in an attempt to create a spatial effect.

In this case, Immerse actually had a very negative effect on our actual gear. In Monster Hunter World, the sound ended up being so loud it would kill our headset temporarily! Definitely not recommended!

It’s definitely sad as a game like Monster Hunter World would benefit greatly from spatial audio. You might be better off using a different solution here.

This was another game where Immerse made no difference, aside from a few key moments. It seems to be a common thing where Immerse either has too much of an impact on the game or none at all. It’s a shame as Overwatch would be perfect for spatial audio.

This was actually one of the more interesting results we got. Not in a good way mind you. When we tested this, it seemed the audio went monaural. It doesn’t seem Immerse is well suited for fighting games.

It makes sense given Immerse was made with 3D gaming in mind and most fighting games have two opponents on either side of the screen, so it limits the spatial audio a bit. But even so, we didn’t expect the audio to sound THIS flat.

We got pretty much the exact same results as Overwatch with TF2. There was no discernable change other than the odd key moment here and there. Given Immerse was pretty much tailor-made for these competitive shooters, it’s a bit disappointing that we didn’t really feel any noticeable difference. 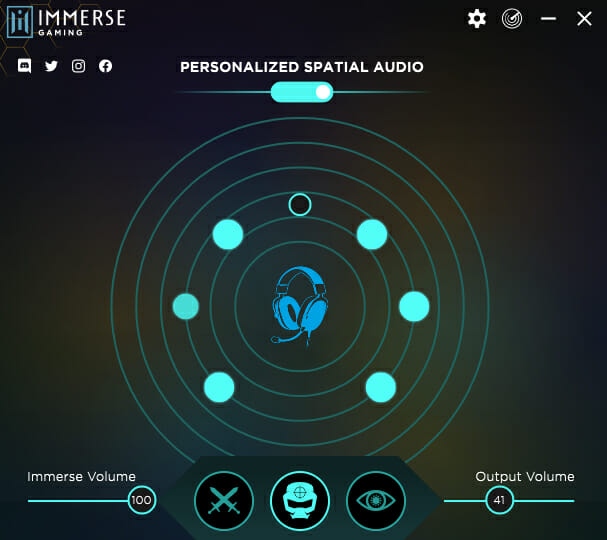 The Immerse Gaming GUI is at least pretty easy to use. When enabled, you have Immerse Volume which I think is how much of an effect you want. The Output Volume slider is how loud the volume in general is.

In the middle of the screen, you can choose between 3 profiles. The first profile is more suited for melee games as it puts audio closer to you. The middle one is the one we ended up using the most for these games as it is heavily optimized for shooters that put the audio at a medium distance from you. The third option puts audio much further away and is better if you play MOBA or MMORPG games.

These settings didn’t really have any impact on the games we played other than changing how loud certain sounds were. In theory, these settings should optimize the experience for different types of games but we didn’t notice any huge difference.

Unfortunately, we had a pretty disappointing experience with Immerse Gaming. It didn’t really add anything to the experience in even the best of scenarios, sometimes sounding like it just phased the audio slightly. If you want true spatial audio with your games, it’s probably better to just buy a proper surround headset.

That being said, the software is still in its early days and may improve over time. With more testing and better compatibility with headsets that aren’t outright supported, it might have more of a promise. But the fact this software requires a subscription and the difficult setup makes it a hard sell indeed.

Immerse Gaming promises personalized spatial audio but even in the best circumstances does little to enhance the games, at least with the headsets and games we tested. Your results might vary.

Retrovibe To Publish Many Titles In 2021

Retrovibe To Publish Many Titles In 2021