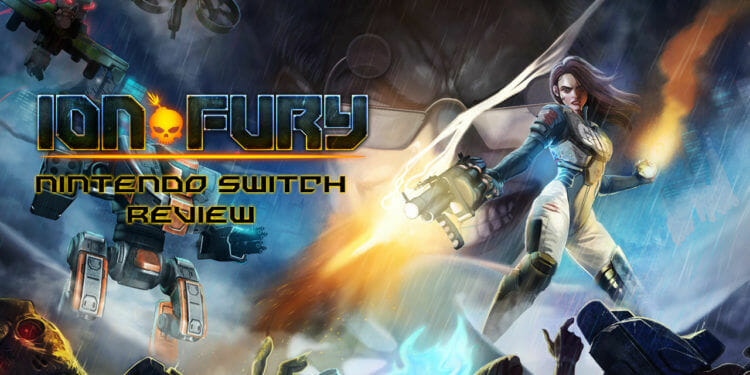 Ion Fury by Voidpoint is the first game a long time to use the Build engine. The Build engine has been used by a lot of iconic 90’s FPS’s such as Duke Nukem 3D, Blood and Shadow Warrior to name a few. Ion Fury carries the DNA of these shooters in its code, and wears its influences with pride.

The game was intended as a prequel to 3D Realms’ earlier game Bombshell which sadly wasn’t that good. And interestingly both games involved lawsuits. Though both for entirely different reasons.

If you want an in-depth review of the Ion Fury original PC release, I suggest checking out my earlier review of it. I will lightly summarize some gameplay mechanics and story elements but overall, this review will be focusing more on the Switch version itself. 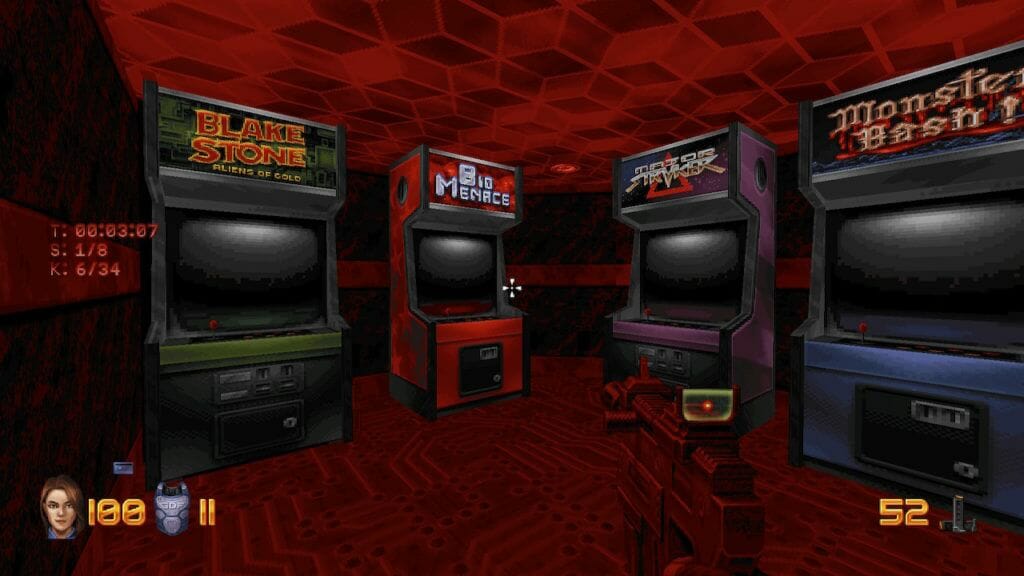 A Story About Revenge

The story in Ion Fury is dead simple. You’re police officer Shelly “Bombshell” Harrison in the near future. At least a future as we thought it would be in the 90’s. You’re out having a drink when the insane doctor Heskel and his army of augmented cyberpunks attack the club you’re in. Time to get revenge for your spilled drink.

That’s really all there is to it. The game follows Shelly’s rampage through the city as she tracks down Heskel for some payback. Will she finally have her drink in the end? Welp, you better play the game and find out for yourself. 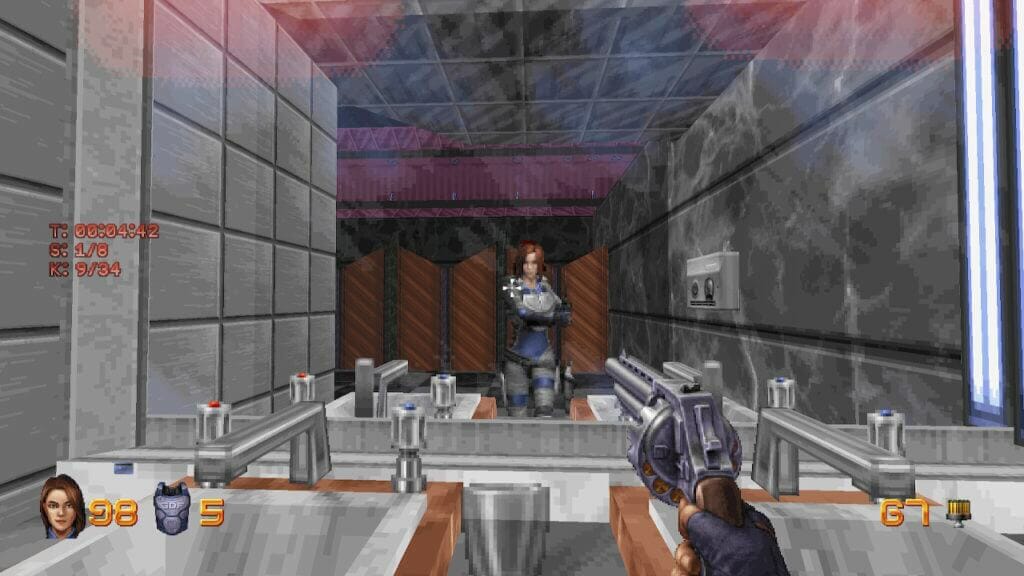 The game falls into the same category as most 90’s shooters. Most of your time is spent tracking down keycards to progress, while managing your health and armor levels. As well as killing a lot of enemies, all with different tactics and weapons required to deal with them.

The arsenal is similar to oldschool FPS’s. You have a pistol (a revolver in this case), a shotgun, SMG (which can be dual-wielded), bowling bombs that home in on enemies, a grenade launcher, the Ion Bow and the clusterpuck.

All the weapons feature alternate firing modes. The pistol can auto-aim at enemies, the shotgun can be changed into the grenade launcher, the bowling bomb can be lit and thrown as a simple timed grenade, the Ion Bow can launch a volley of bolts and the clusterpuck can be placed on walls.

The arsenal kind of lacks a big gun. Pretty much all classic shooters had a BFG of some sort. That being said, all the weapons feel satisfying and have some sort of use in the game. So it’s not like any of them become useless.

You also have a melee weapon in form of an electric stick. This can not only be used to electrify enemies, but also turn on generators. I noticed it was particularly effective against the spider enemies, as a single hit against them causes them to explode. 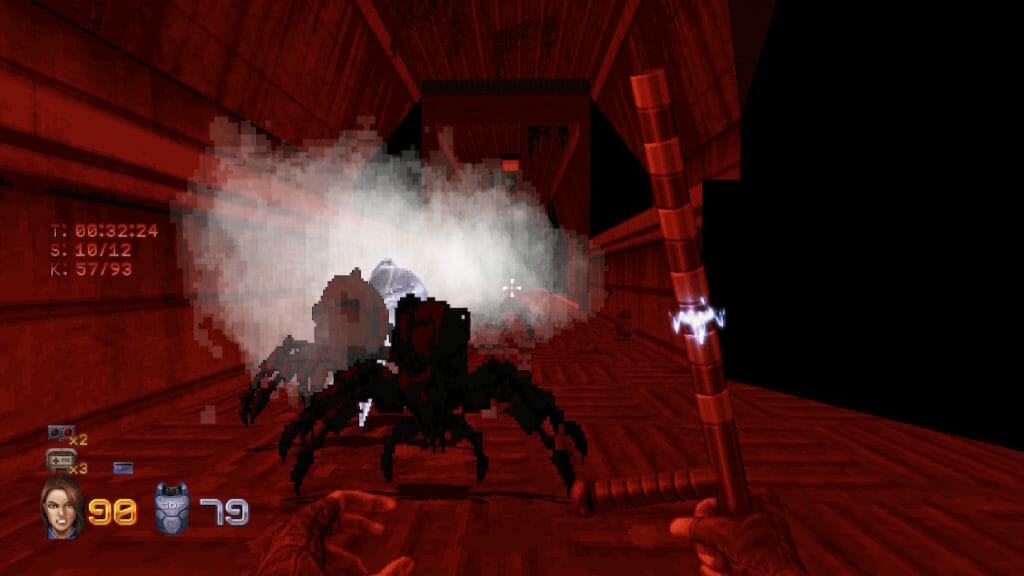 Most of the enemies consist of punks that have been cybered up and carry shotguns, grenade launchers and bows. You also have some more experimental enemies such as flying drones and enemies that can move really fast.

The enemies are introduced at a fairly decent pace, keeping the game from becoming boring. The game is also loaded with secret areas, which can grant you some of the more powerful weapons early on. Some of these can be trickier to find than others.

Ion Fury is divided into zones. Each zone is comprised of several levels that are interconnected. The game will usually warn you when you pass a point of no return however. 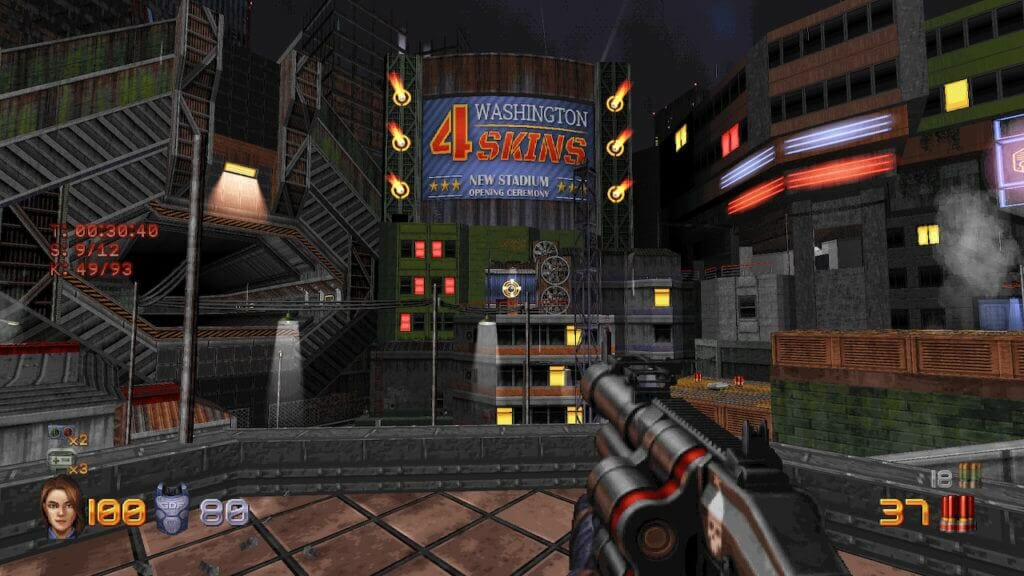 While the PC version was best played with a mouse and keyboard, you are more limited on the Switch. And I did encounter some issues with the controls. Specifically with the aiming.

It seems the aiming isn’t analogue, but rather digital in 3 steps. And sometimes when pushing the stick all the way to one direction, it still moved at a slow pace as if the stick hadn’t been pushed all the way. It feels a bit finicky and kinda messes with me when having to turn quickly.

While Ion Fury maintains a steady framerate on the Switch, it is locked at 30 fps. So don’t expect a full 60 fps experience on the console. That being said I hardly noticed this as I was playing the game. So at least there weren’t any dips that I could see.

Overall playing Ion Fury in both handheld and docked mode gives a very crisp and clear picture. I didn’t really encounter any resolution issues. So if the game does have dynamic resolution, I couldn’t tell. So aside from the control issues, I had a fairly good time with Ion Fury on Switch. Audio And Other Issues

I did encounter some issues on the audio side of things. It seems the tracker tunes didn’t make it into the port without suffering a bit. As I noticed some sounds were missing entirely from the compositions and made them sound entirely wrong. It was particularly noticeable on the first level’s music.

I also noticed the game takes a very long time to load the first time you run it and even getting to the control screen takes way longer than I expected it to. You kinda get used to it but be prepared to have some time before the game actually gets to the main menu.

Another thing I noticed is that if I leave the game running, and leave the console in sleep mode for a while, the game will be frozen when I open it again. Which is a bit of an issue if I haven’t saved it. So just make sure to save often. 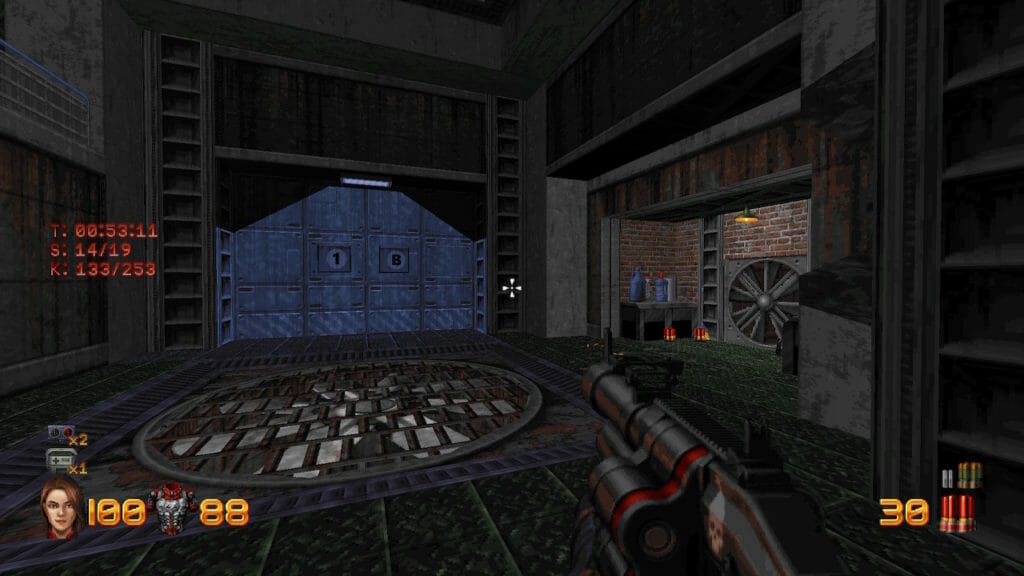 Despite some shortcomings on the more limited hardware, Ion Fury on Switch is still a great shooter. All of the game is intact here and running smoothly, which is kind of impressive given that the game is quite the CPU hog. For being on such a limited system, I think the port holds up well.

With some patches addressing these issues, this is definitely a game worth adding to your Switch library. Especially if you’re longing for the days when FPS games didn’t have microtransactions or high budget cutscenes.

The game is available on Switch right now, so check it out!

A flawed port that still retains the fun and intense Build engine action of the original PC game.