Space Spiders in the Dark

by Endyo
in Game Reviews, PC Reviews, Xbox One Reviews
0

Co-op first-person shooters haven’t had a big impact these days. Left 4 Dead and Left 4 Dead 2 put this style of game on the map by creating exceptional gameplay. Vermintide and Vermintide 2 took it in a somewhat different direction adding character persistence and a little more variety to the combat. Deep Rock Galactic builds on this further by giving you more objectives than simply going from A to B, and the additional mechanics add great depth to this subterranean adventure. The premise of how exactly these Space Dwarves came to be on an orbiting station around a planet full of underground resources to mine isn’t explored in the introduction to Deep Rock Galactic. I suppose it’s not particularly important since it’s easy to surmise that it’s just what they do. What’s left is a scenario where your first task is picking one of the Dwarves and getting acquainted with their loadout.

The choice of the Driller, Engineer, Gunner, or Scout is usually a pretty easy one to make once you’re familiarized with them. They have very clearly defined roles. While in every role you’ll be mining resources and collecting items, they each come together to contribute. It’s possible to have duplicate Dwarves in a team (if the host allows it), and you can be successful, but the missing skill set will be noticeable.

The Driller can use his hand drills to quickly create a path between caves and tunnels. The Gunner can shoot zip lines everyone can use to cross gaps and go up and down sheer rock faces easily. Engineers have a platform gun that places mountable platforms on any surface that can be incredibly useful. Then the Scout, while not the most effective class, has the powerful flare gun to create a long-lasting light in the darkness of the depths.

Resources you collect can be used for upgrading their weapons and gadgets independently as well as accessing the massive collection of cosmetics. These unlock with levels gained by the player as well as each Dwarf as you play them. Special minerals mined and cash collected for completing missions are required for all of these purchases. 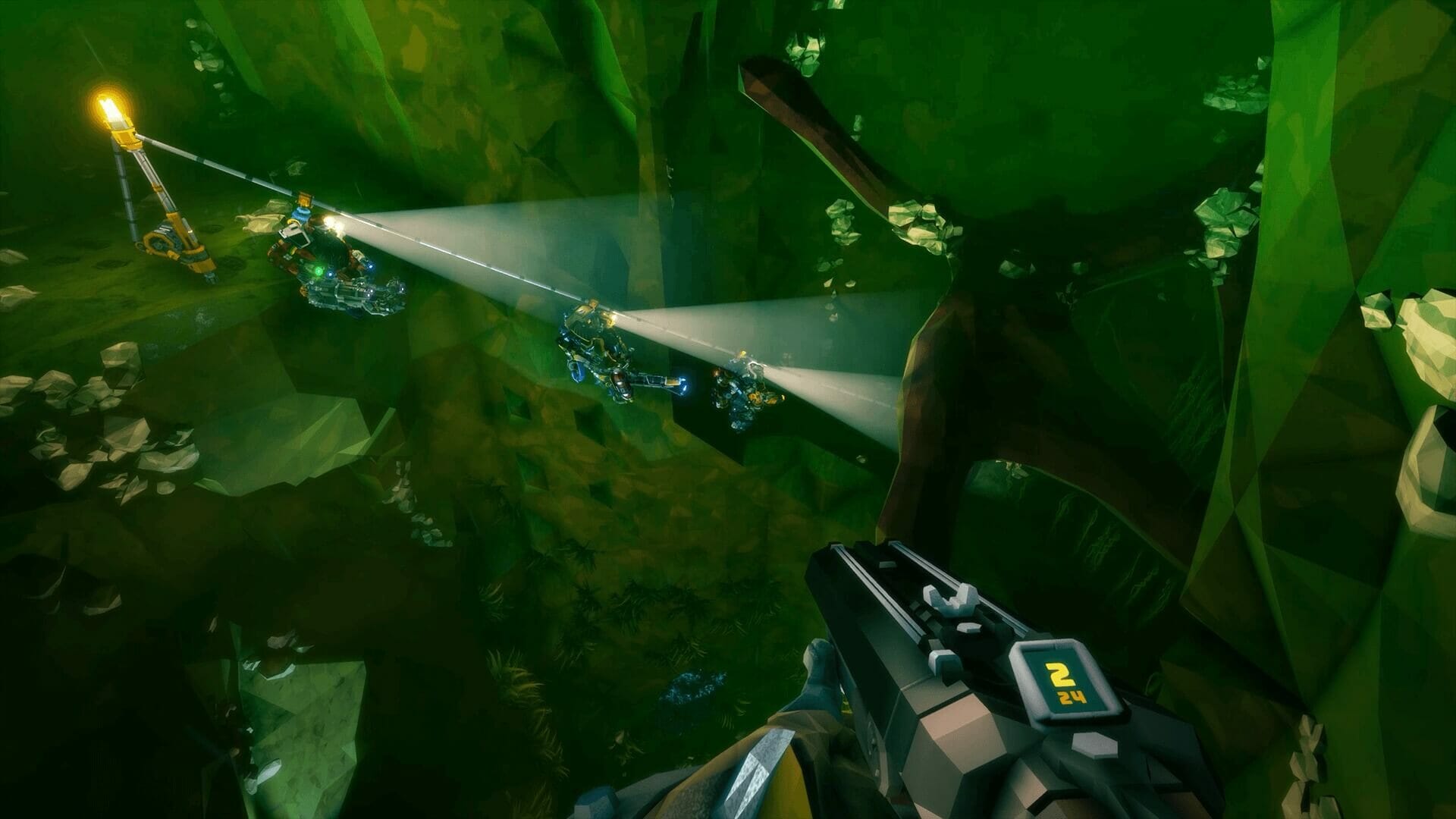 The Darkness of the Depths

One thing that makes Deep Rock Galactic unique is that the vast majority of the light in the game is generated by the players. There are some bioluminescent flora and fauna as well as some glowing crystals and heated rocks, but never enough to navigate. Each character has a headlamp that provides the bare minimum of a spotlight, but the flares are a requirement in being able to see.

The recharging stockpile of four flares lets you bring light to a small bubble of your surrounding area with what is a fantastic lighting system. The Unreal engine, of course, can take partial responsibility for this, but they’ve done great things with it. The flares recharge slowly enough that, if moving quickly or alone, you will soon be in darkness. This happens quite a bit in the chaos of each mission if you’re not careful, and it’s a great addition.

Being lost in the dark with minimal light knowing that you could easily plunge over a hidden cliff face or wander into a bunch of angry alien bugs is a thrilling, yet terrifying, experience. Making use of the Scout’s flares in wide-open caverns where your light may not reach far becomes very important. Extended battle sections such as boss fights often have your flares burning out mid-fight leaving you clamoring to get them in places to help you see. It adds substance to an otherwise relatively simple combat system. 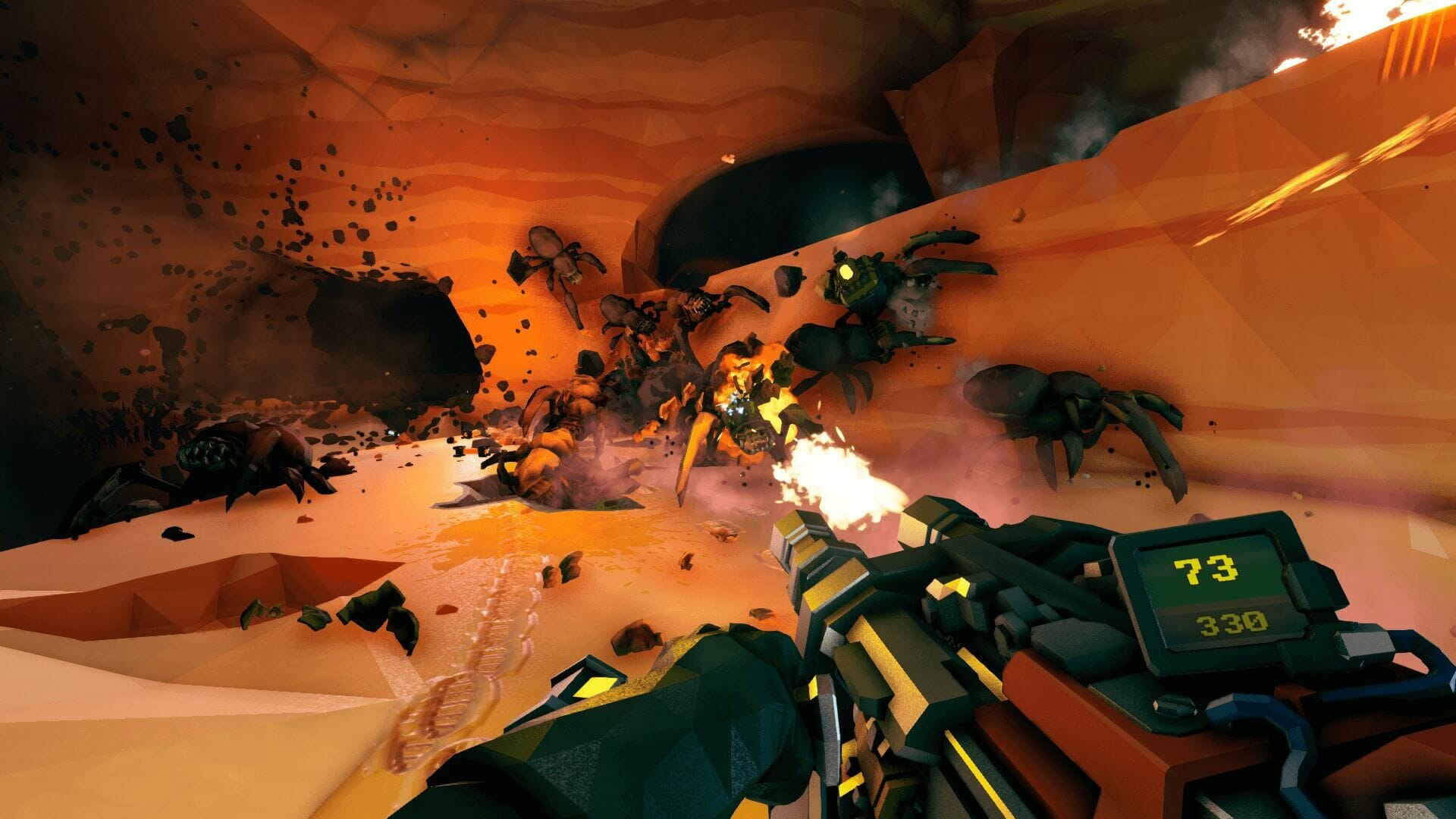 The procedural caves of Deep Rock Galactic are filled with minerals and materials to unearth. They’re also home to plenty of hostile plants and creatures. The spider-like monsters are the most common and the majority of them can be killed with the variety of weapons the Dwarves use. Some, however, require a little more finesse to dispatch.

The tougher aliens usually have glowing weak points on which you can focus your fire. You’d think this would make them easy, but they’re often on their back – which is facing away if they’re charging at you. This means team play is even important for fighting. It also makes fighting in the dark more dangerous as some enemies are invisible while others are only partially glowing. Sometimes shooting everything you’ve got in the general direction is the best choice.

Boss fights and especially large aliens can make for really challenging encounters. If you split off to mine some resources by yourself, these guys can ruin your day. Even smaller weaker enemies can swarm the unprepared, but an armored monstrosity cornering you will leave you incapacitated and hoping your team can get to you. This situation can happen even while playing as a team though, as some enemies can grab you can drag you off to far reaches of the map. 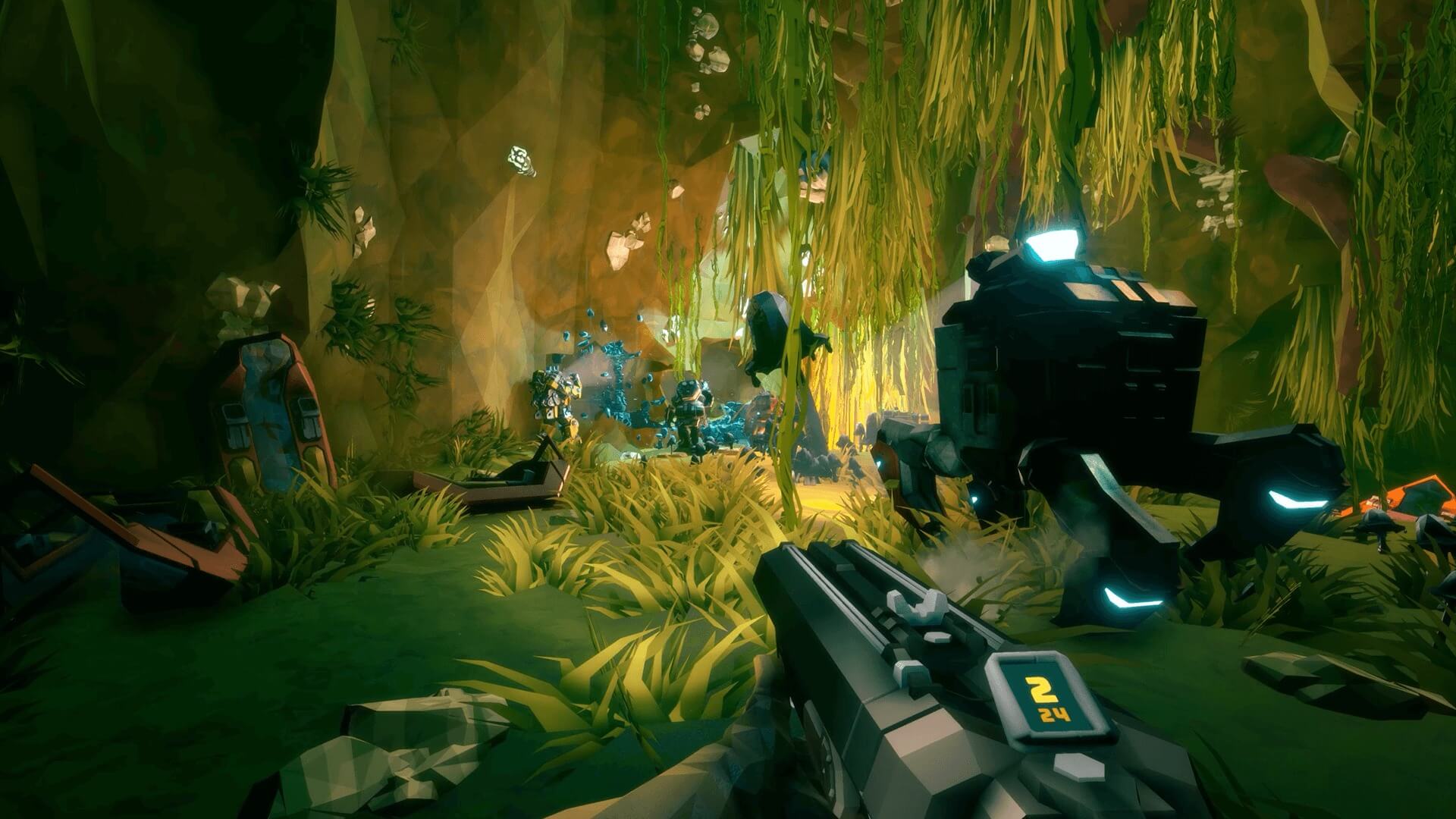 No Dwarf Left Behind

Deep Rock Galactic can be played solo, but it’s certainly not the intended experience. Since you can be so easily overwhelmed, you’re given a flying robotic companion with the ability to blast enemies with machine guns and rockets, revive you, and mine minerals high on cave walls for you. It seems useful, but the AI is mediocre at best and the experience is slow and painful by comparison. The game is meant for co-op play and is best experienced that way.

There’s something magical about the combination of combat, resource objectives, and navigating/manipulating the dark tunnels. The procedural construction makes some very natural looking cave designs and the way you can carve through them makes them wonderful to explore. Even with how somewhat repetitious the objectives can be, the diversity in the map design and enemy encounters makes every mission feel unique.

I do hope that the future brings more of everything to the table. More enemies, more mission types, more biomes, maybe even more Dwarf classes. I also wouldn’t mind seeing the Scout get an additional tool to make him more useful. Given that the only thing critical I can think of for this game is that I want more of what is there, I hope I am conveying how much I enjoy it. With the 26 hours I’ve put in it so far, I feel like I’ve only just gotten started. I look forward to diving in more in the future and seeing how high some peoples’ levels are in the game, I’m not the only one with that sentiment.

If you’d like to see more reviews, check out the underground adventure of Metro Redux or Gears Tactics!

Deep Rock Galactic is an exciting multiplayer co-op FPS about mining minerals, blasting hostile aliens, and making it back home alive. It does everything you'd want in a game of this style and left me only wanting more.