Dogfights That Could Be Cleaner

Jet Lancer is a brand-new title that’s due out May 12th for Nintendo Switch and Steam. Fans of 2D side scrollers and air combat games may find this game to be to their liking. Previously, we’ve covered the game’s reveal trailer here at BagoGames. And now, developers Vladimir Fedyushkin and Nicolai Danielsen at Armor Games Studios sent BagoGames a review code.

Does the game hold up to the standards of classic aerial flight games? Is it worth purchasing on its release date? Is the Switch version a perfectly fine version on its own? Hopefully, those questions in of itself will be answered today. Immediately upon loading into the game, the player is greeted by a rather simple title screen with few choices. The player can start Story Mode, go into the Options, or view the project’s credits. Not much to leave to the imagination in terms of outer features, though.

Story Mode is exactly what it is; playing missions to upgrade your ship and score higher-profit jobs. You take control of the Lance, an experimental jet that supposedly never saw the light of day. The pilot is named Ash, and you and your crew work to save the world and clear your names after a previous mission went awry.

The game, in of itself, looks quite simple, but it’s part of the charm. Vibrant colors fill the game, and it has enough color variety that you won’t lose your ship in most of the chaos that ensues. The music even sounds almost timeless at the same time, allowing players to just have fun with it.

How the Game Controls

The game has simple-to-use controls that almost anyone can just pick up and play. ZR controls the plane’s acceleration and forward momentum. Combining this with the left stick allows for free directional flying completely influenced by the player. Letting go of ZR causes the ship to slowly lose speed, allowing for a quick turnaround and quick acceleration.

The A button fires the Lance’s primary weapon, and it aims in whatever direction the ship is traveling. Pressing ZL will use the afterburner, giving a limited-time burst of additional speed before cooling down. 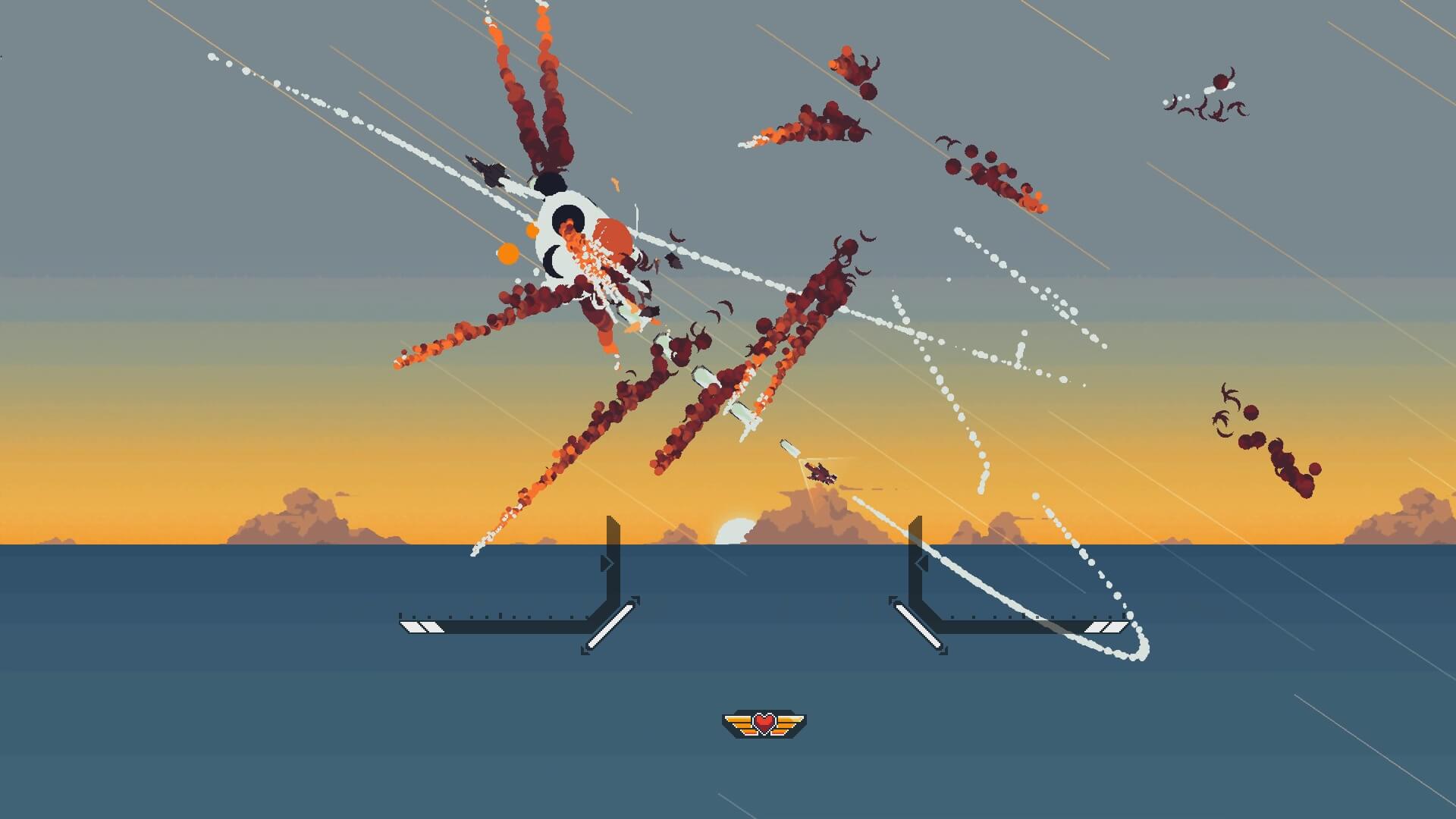 The L button functions as your Special Weapon. At the start, you have only guided missiles. Progressing through Story Mode allows the player to gain more items, expanding their weapons catalog. Holding L, however, starts powering up a Charge Weapon that acts as a super move.

Each of these Charge Weapons have their own cooldowns, so the player doesn’t get away with spamming them at all times. Starting out, you only have a missile swarm. As mentioned above, you unlock additional Charge Weapons over game progression. More info on unlocks later.

Pressing B allows the player to roll, giving them a way to avoid damage. Timing it accurately will allow the player to get a short burst of increased fire rate, rewarding the player with bonus damage output. Rolls also prevent the player from taking excessive damage when the screen starts to get too busy.

Jet Lancer takes the liberty of cutting right to the point when you select missions. It gives you a brief description of the objective, and drops you straight into the game. Mission objectives, from what can be seen, are one of the following:

Missions are quick, and easy to grasp the concept of. Most of the time, you’ll be dodging fire from various other ships aiming at you from five or more different directions. This is where another factor comes in; health. The player can only take three hits before the Lance crashes, and they have to restart the mission. Checkpoints are absent from missions, too, but most levels are short enough that it isn’t needed. 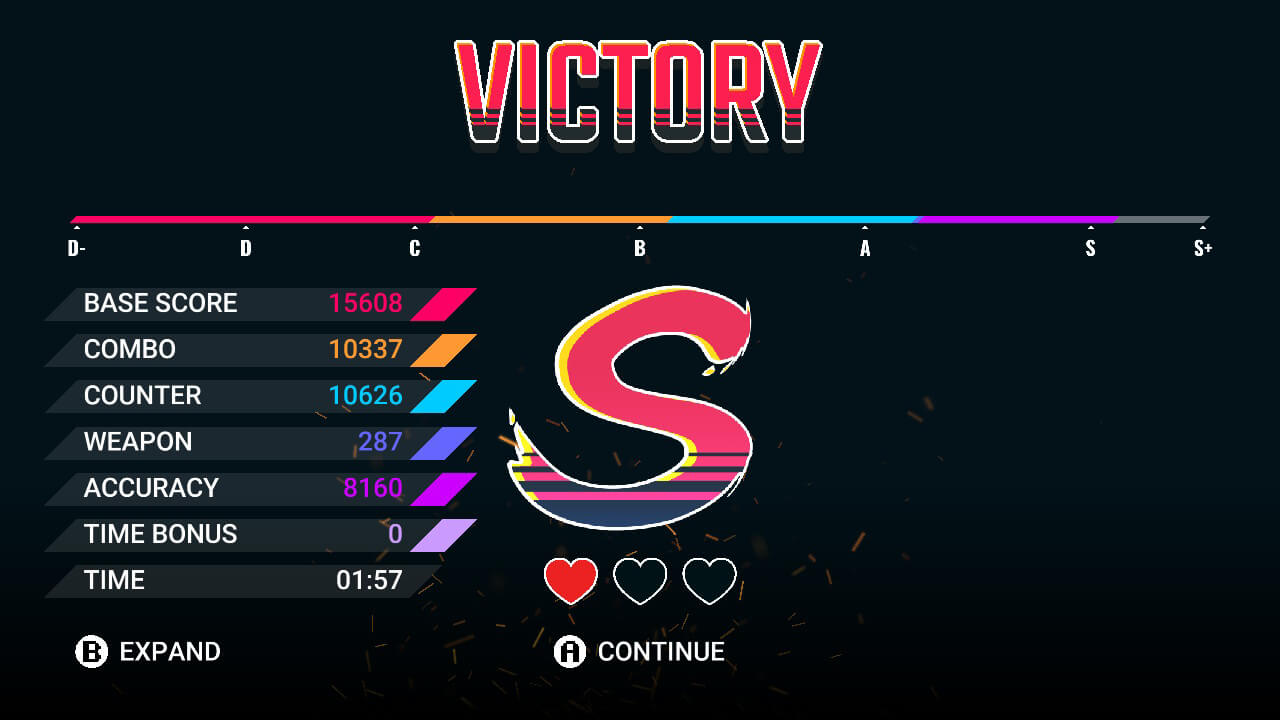 At the end of every mission, your score is rated between levels of D- to ACE. Your remaining health is also shown, and not getting hit shows a CLEAN mark over your three hearts.

Getting an ACE rating requires not getting hit throughout the entire mission and getting an S+ rating (the ranking right below ACE). Score tallying is made up of multiple categories, including

Getting an ACE rating may seem daunting at first, but it’s most certainly doable, just with practice. 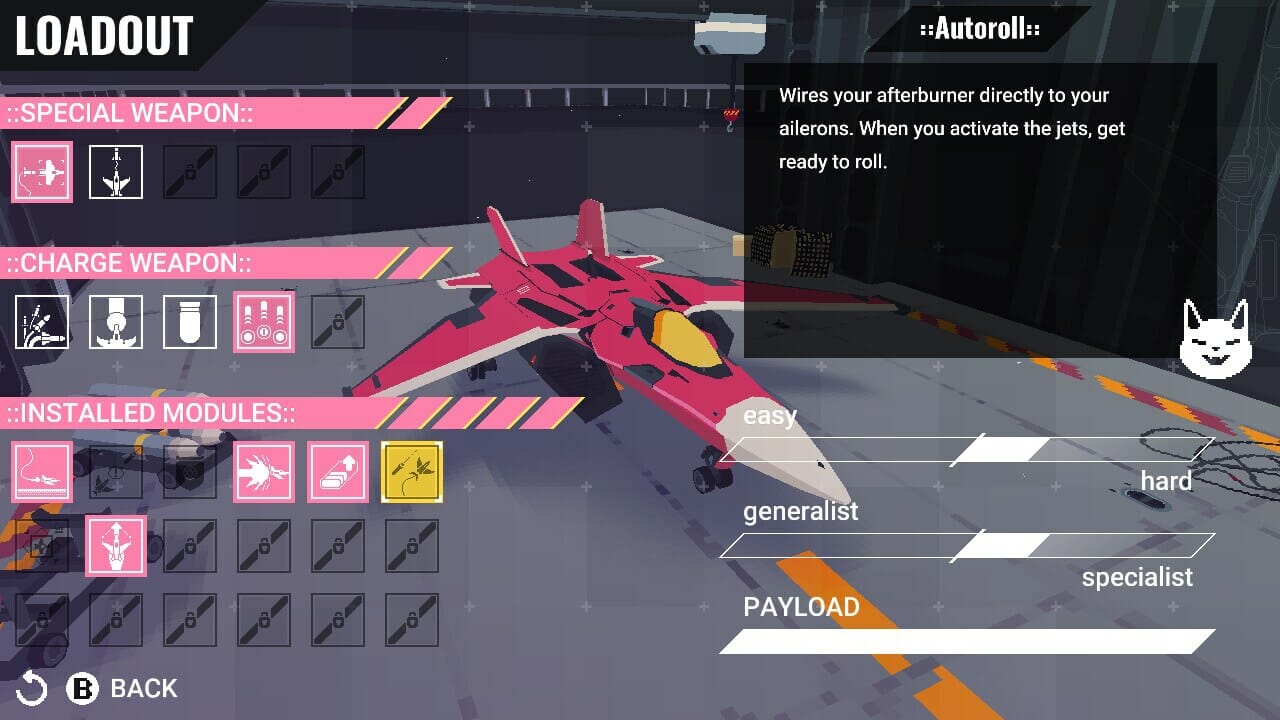 As you progress through the Story Mode of Jet Lancer, you unlock various new weapons and gadgets to customize the Lance. On the world map, accessing this menu is as simple as pressing X. In this menu, the player has access to three different customizable categories.

The third and final category to discuss is the Installed Modules. The player can select four modules to assist their gameplay, or play with none of them installed at all. The three selectable modules at the start are available as follows:

Game progression (clearing missions and defeating bosses) unlocks more mods for the Lance, allowing the player to mix and match to their preference.

The Options and Accessibility Menus Are Great

Something of note is that the Options give you a lot to work with. There, you can change audio, gameplay settings, controls, and Accessibility settings (more on that in a second). Audio is self-explanatory; you can change the sound effects and music volumes here.

The gameplay is another section in of itself. The menu gives you the ability to change language settings, text speed, rank display on replayed missions, and camera shake. The camera shake is nice because someone could be having a hard time seeing their ship if the screen’s shaking all the time. That meter can solve the issue.

Rounding out the options are Controller settings and Accessibility. Controller Settings allows you to change button inputs, vibration, the bank type (As of writing, it’s unclear what this does), and analog dead zone.

The real meat of the Options is the Accessibility. For instance, the expansive category allows you to adjust various categories such as

These additional features allow the game to be tailored to the way almost anyone wants to play Jet Lancer. 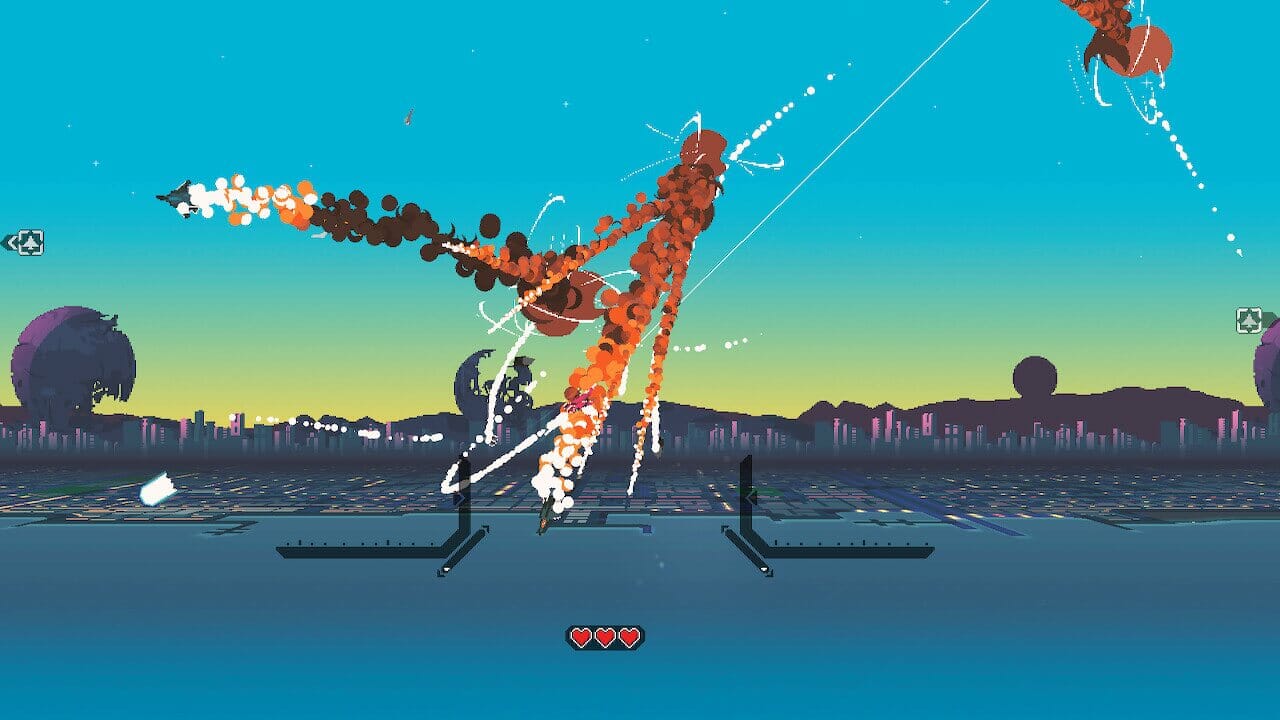 Oddities With the Game, and Suggestions

Not everything is roses with the way Jet Lancer is played. This section focuses on the Switch version primarily, as it was the platform that we received a review copy for. That said, let’s talk about the version’s ups and downs.

For starters, even on Nintendo Switch, load times are non-existent, save for obviously booting the game. That’s very good because it means players won’t have to be waiting a while for their game to load. However, a few oddities are present in the Switch version, and it’s unclear if these oddities will be in the PC version for the May release. For instance, some dialogue is either missing or unfinished.

I am aware that we’re reviewing a pre-release build of Jet Lancer and it could be that this will be fixed in the full game release. But some conversations in cutscenes will have a 0 value, and you have to skip the rest of it, not knowing whether you missed something or not. What a glitched cutscene looks like is shown below: 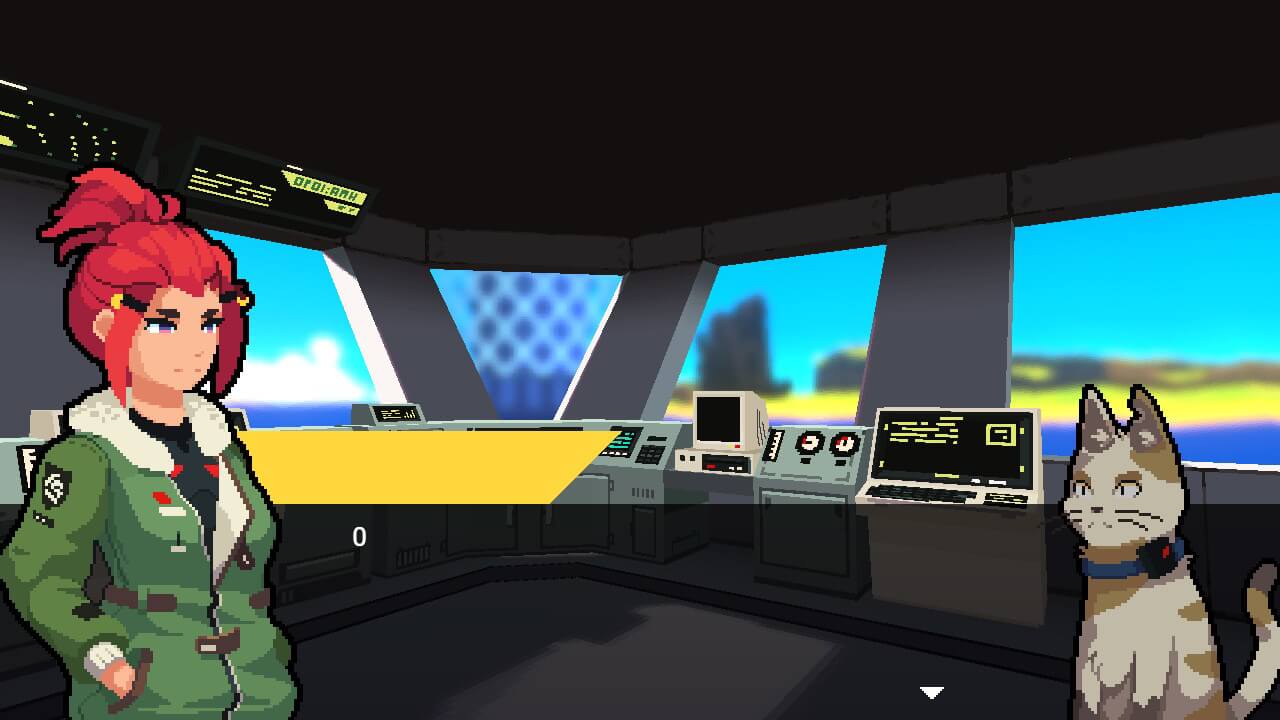 In comparison to a regular cutscene still: 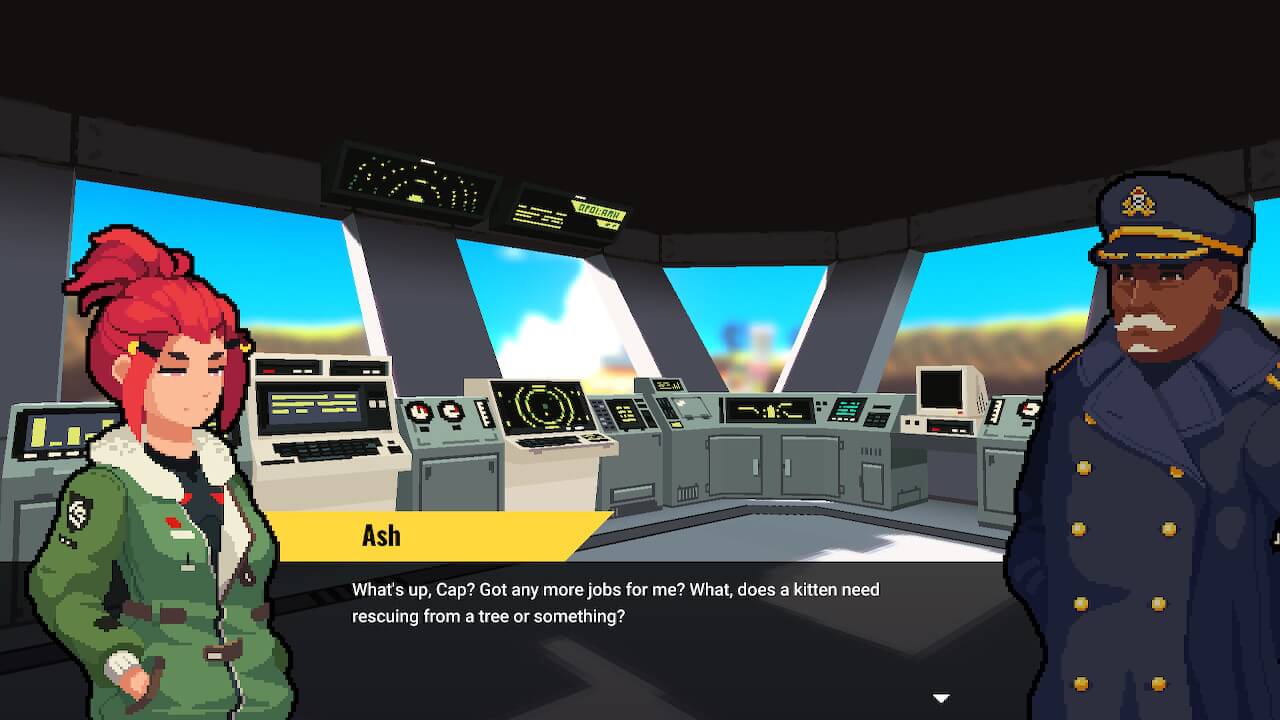 (Update: The 1.0.10 patch of Jet Lancer has since addressed the glitched cutscenes. The version reviewed is the 1.0.0 version of the game.)

Another concern of the game is that there’s a strange, almost frame-skipping stutter when the screen gets particularly busy in handheld mode. It’s kind of hard to initially catch, but when you see it, you’ll definitely see the frame-skips.

A third cause for concern is the game crashing. Again harking to the point of Jet Lancer currently in a pre-release state, there is room or time to fix it. However, if you lock your Switch for any reason and come back to the game later, there’s a chance the game can crash and kick you back to the HOME Menu. Problematic, but fixable.

Possible Additions In The Future

Jet Lancer could very much use additional modes aside from Story Mode. A very convenient addition could be an Arcade Mode, or maybe a Boss Rush mode. An Arcade Mode could take Ash and the Lance through a series of levels culminating in a big boss fight. Boss Rush could allow you to try to beat all of the bosses as fast as possible, obviously unlocking after clearing Story Mode.

Another potential option could be adding a Hard or Very Hard difficulty, to give players who have beaten the game and New Game+ a reason to continuously play Jet Lancer. 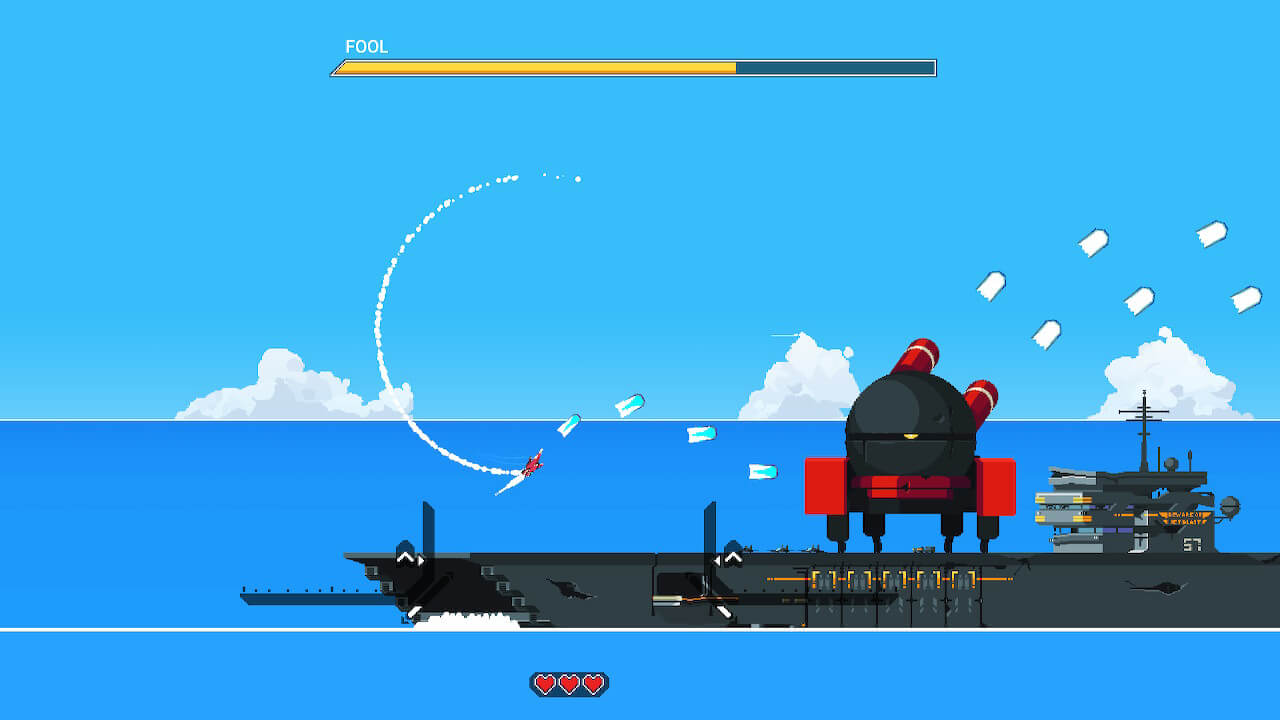 Jet Lancer is a very solid game. It’s easy to pick up, fun, and frantic to dodge enemy ships, and missions aren’t long to the point of monotony. Its vibrant colors and classical visuals are pleasing to the eye, too. The accessibility features are also a great consumer addition, and opens the game to a wider audience.

However, pre-release glitches are kind of noticeable. A lack of gameplay modes also shallows the experience somewhat. Overall, with some fixes, the game could be pretty close to perfection, but without them, the game’s still good. Just, it hasn’t reached its full potential yet.

What do you think about our Jet Lancer review? Do you want to buy the game? Is there anything that you think we missed? Let us know your thoughts in the comment section below.

If you like indie game reviews, be sure to read our review of Iji here.

Jet Lancer is a game that holds a lot of promise, and it's fun to spend time gunning down enemy ships. However, sparse content and glitches can muddy the experience for some.

PlayStation Studios Announced, Will Launch Alongside PS5 in Holiday 2020