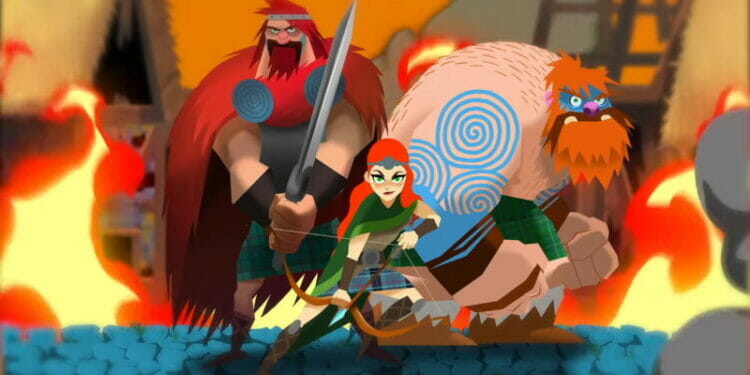 Yes, you read correctly, the Irish are finally getting a video game based on their Celtic-lore! Clan O’Conall and the Crown of the Stag is coming to the Steam Autumn Games Festival and Kickstarter in October! In this 2D puzzle platformer you can play and swap out one of three playable characters. Set in Hibernia the three heirs to the throne attempt to stop their father from being killed by Caoránach, the Mother of Demons. His death and the theft of the power of the crown would begin a new war between the mortals and Aos Sí.

Clan O’Conall and the Crown of the Stag has some amazing features,

Switch between three heroes and wield their unique abilities to dominate enemies.
■ Conquer challenging and dynamic puzzles.
■ A stunning art style: meticulously animated characters in a verdant world.
■ Quest across epic levels and complicated platforming!
■ Celtic, Scottish, and Welsh folklore and storytelling, with themes of family, honor, and
compassion.
■ Enemies and creatures are drawn whole-cloth from Celtic mythology.
■ A dynamic original Celtic soundtrack by Adam Gubman of Moonwalk Audio.

The development of Clan O’Conall and the Crown of the Stag has lasted for two years, with an expected Q1 2021 release date. The Kickstarter, which can be found here, runs until October 31st. So you have all of October to back the game and receive the rewards.

Tags: Clan O’Conall and the Crown of the StagKickstarter
ShareTweetShare
Previous Post