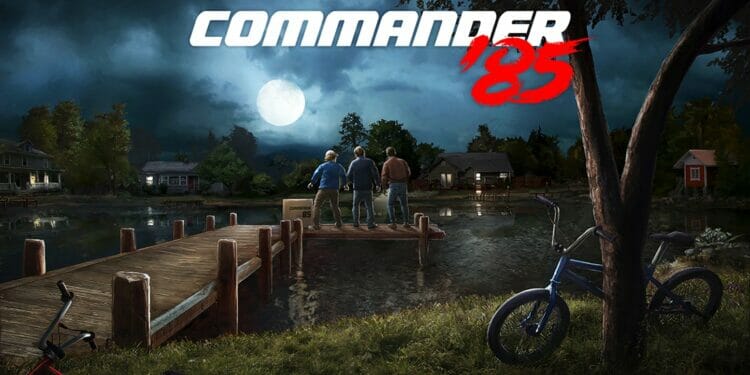 I still believe that I was lucky enough to have grown up during the best time for Saturday morning cartoon, movies, comic books and video games. I am a child of the 80‘s, in fact when Commander 85 takes place, I would have been 4 years old and enjoying my Transformers and G.I. Joe! So when I boot up my download of the game I am hit with huge wafts of nostalgia!

The year is 1984, you play as a young high schooler with a nice state of the art computer named, Commander 85; which was given to you for your birthday. We first see you getting scolded by your mother for truancy at school. Your computer offers to help you by hacking into the school’s database and fixing your attendance records.

What you don’t know is that this computer is part of a government study, kind of like the video game urban legend Polybius. A van that leaves a suicide crime scene with the Commander 85 in tow suddenly appears in front of your house. Unfortunately you are not aware of the situation, but the gamer is. All seems to be going well until your computer gets hacked and is overtaken by a malevolent virus. This virus begins to slowly lock down the current operating system in your Commander 85 and it really isn’t up to any good. Your computer implores you to stop this virus before it completely overruns it.

When you leave the computer you have to appease your pregnant mother who obviously doesn’t understand that if you don’t stop the hack into the computer there will be thermonuclear war, but she’d rather bother you every ten seconds so you can read a book or walk the dog. This gets so aggravating because she will talk to you, then a tenth of a second later she spouts out, “Look at me when I’m talking to you.” And you’ve not even been given a second to fucking turn around.

This plays very much like an early point and click adventure from the 90’s. They could have really gone all 80’s and done a text adventure instead, like Zork. You highlight things around you and Right Click to interact. You spend a good chunk of time on the Commander 85 and you’re basically using antiquated computer speak. I was getting stuck because I forgot how my old Apple IIe use to work. Once i remembered how to computer 1980’s style I was more successful as a hacker.

Most of the controls happen while on the computer or in the computer. When your mother is bothering you to pedantic things the game takes control of where you must go. However, there was one point in my room where I needed to pick up a walkie talkie, yet I couldn’t see the damn thing in the room much less find it because there is no option to wander around your room and search. My friend, must think I’m dead because I just shut off the game at that point.

When you’re unsuccessfully attempting to stop the hacking of your computer, there will be times when you are sucked into the computer to play a game. This is a huge homage to Tron and our old 80’s games. You use the arrows the move and Space Bar to jump. The first game I encountered was basically Donkey Kong versus the final Tron boss. So while the awesome pop culture nods were there, the gameplay to get to them and enjoy them were not.

I enjoyed the barebones look of this game. The brief cut scenes looked nice and the bedroom you spend most of the time in reminds me of mine from the 80’s. At least seventy percent of your time will be on the computer, so you’ll see the computer screen with a reflection of you, who NEVER blinks! The screen has the greenish tint that I grew up with, but when you’re hacking or playing a game you’re given some nice color games.

The retro games that you play on the PC once you are sucked into the computer are pretty fun to see. These are the game I grew up on and played in the actual arcade. The nostalgia is strong with the game, I just wish I could have enjoyed it more. Being interrupted constantly really took me out of the experience. My parents watched over me, but by Gods, they left me alone from time to time.

I always hate to give a less than positive review, but Commander 85 was just not my cup of tea. The game looked good, played reasonably well while in Retro Game mode, and had a great soundtrack. This game bleeds of my childhood and I give it mad props for that, however it also played like a game from my childhood, poorly. Had they made the interface with the computer simpler, even with the “hint” pamphlet, it was still difficult.

The constant bothers from your mother made the game almost infuriating. That would just make me stop playing the game, once in a while was fine, but she kept bugging you constantly. If you’re a fan of retro games, pop culture and poor mechanics in parts of the game, then download Commander 85. You’ll enjoy it.

A retro game with some great pop culture references and nods just doesn't hit the mark with me gameplay wise.