Summertime Rendering provides quite a unique reading experience. The manga succeeds at engaging the reader with every passing page through a slew of breathtaking twists, turns, and intriguing mysteries, and despite some of its character flaws (so far), the manga gave me several reasons to keep reading with every page turn. 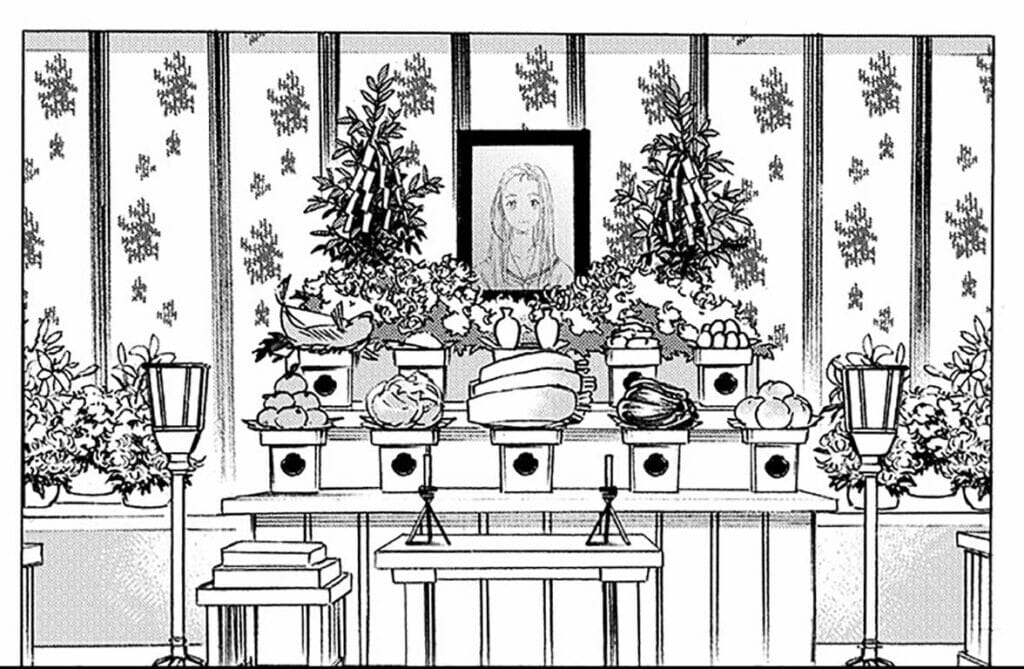 Summertime Rendering introduces readers to our protagonist Shinpei Ajiro, a boy who’s almost as mysterious as the world he’s placed in. The little we know about Shinpei is that he was taken in by the Kofune sisters, Mio and Ushio after his parents died. However, after a certain period, he moves out of the island he was raised on to live on his own in Tokyo. Shinpei returns to the island years later after learning Ushio, one of the sisters he grew up with, died while trying to save a girl drowning in the ocean. Upon arriving, strange things quickly begin to happen to Shinpei and the island as rumors circulate about the nature of Ushio’s death being not so accidental. But before we can process this, we’re hit with the surface of alien-like doppelgangers known as Shadows and Shinpei’s time-traveling abilities.

The manga hits the ground running right from the first page. So many events unfold so frantically and simultaneously it’s enough to give the reader narrative whiplash. For example, after learning about the circumstances behind Ushio’s mysterious death, we then find out about the alien doppelgangers. We are then shown Shinpei’s mysterious time-traveling abilities before it is then revealed that the dead Ushio is somehow able to communicate with him shortly afterward. 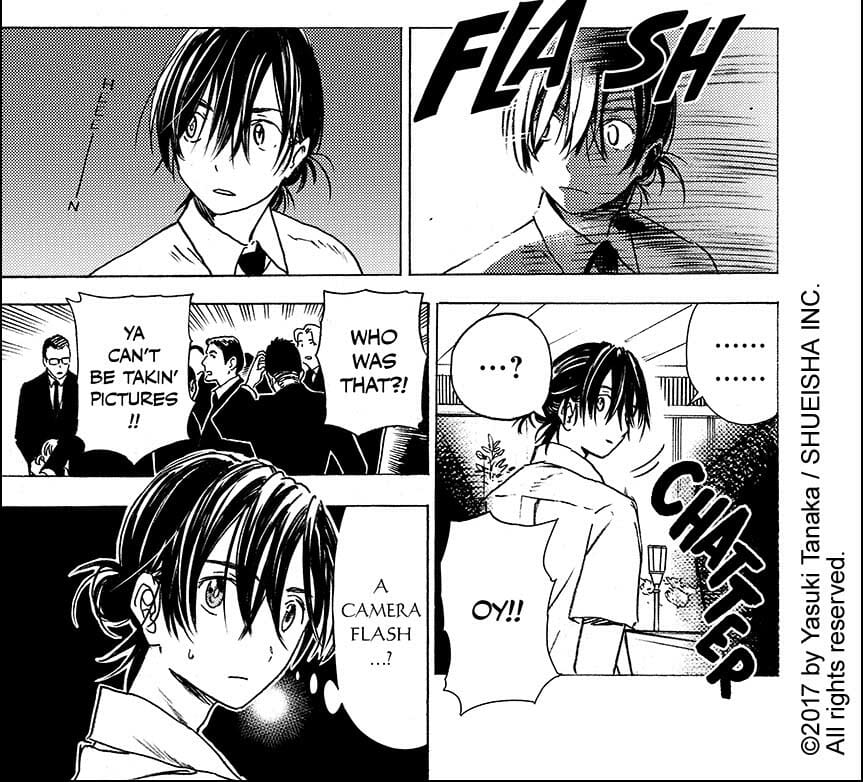 The Beauty of Strangeness

However, the manga lays out the events in a way that makes them incredibly entertaining and engaging. Each mystery or new plot point brought up always pays off later in the manga, if not almost immediately. We also quickly learn that it isn’t afraid to go to dark places with how fast it jumps to display how easily the main characters can have gruesome deaths. While each and every reveal was able to get a reaction out of me, what shocked me the most was how much thought was put into these twists and the mysteries they originate from, as they’re all supported by distinct little clues seen earlier in the first volume.

The manga’s most interesting aspect thus far has to be its time-traveling element. While it hasn’t been explained as much as I would’ve liked, it’s an aspect that undoubtedly makes it much more interesting and engaging, especially in the mists of all the chaos stemming from the activities of the aforementioned doppelganger aliens that only progressively gets more chaotic. 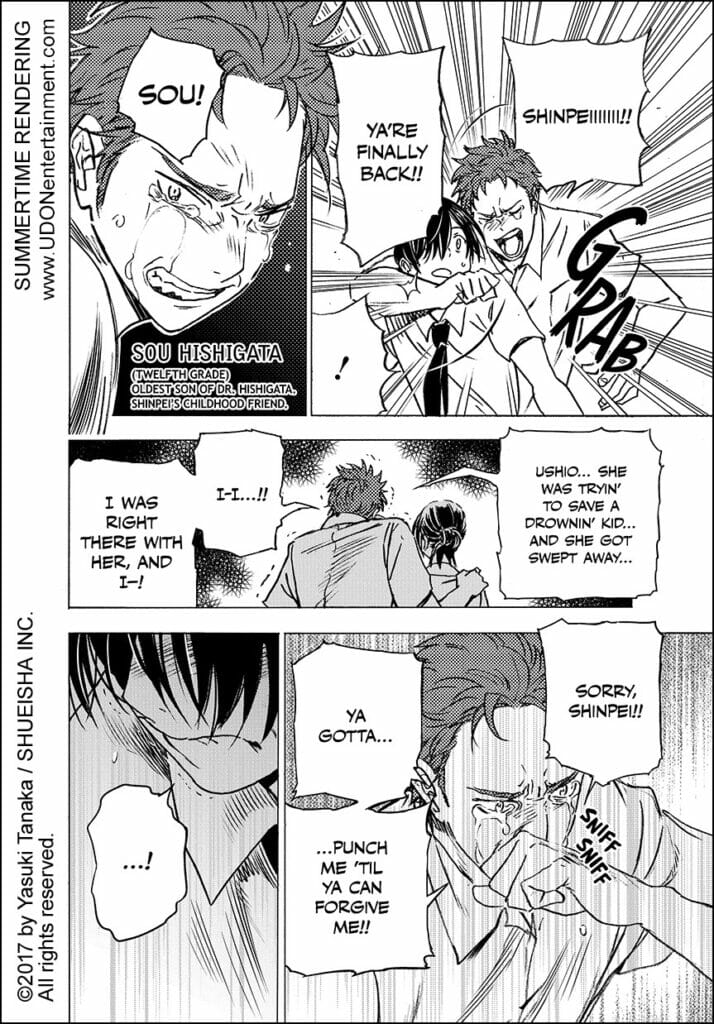 Cracks in the Hull

The only aspect of the manga that I feel is lacking so far is its characters which I found incredibly dull and too typical, as they exhibit the same default tropes you’ll see in most anime and manga characters these days. For example, Mio, who despite more or less being Shinpei’s adoptive sister, is in love with him, and Sou, another one of Shinpei’s childhood friends, is in love with Mio, resulting in this strange love triangle that seems unnecessarily introduced in the last leg of the volume. Even Shinpei, the protagonist, is guilty of this as he so far barely has any character trait worth mentioning aside from “Protagonist.”  The only character that I’d say is remotely interesting is Ushio (who we see a lot of in the volume) due to her boisterous nature that at least proves she has a personality.

Visually, Summertime Rendering’s art is one of its most impressive elements. The manga’s backgrounds are incredibly detailed, and the linework is impeccable. While the character designs are plain, said characters are drawn with distinct, easily distinguishable, and superbly detailed expressive motions and facial gestures in every panel. Additionally, I’ve never seen a mangaka utilize the dark tones of black ink, as well as Yasuki Tanaka. This is most noticeable whenever one of the aliens pops up in a panel, as the use of the color on these creatures does an excellent job of instilling a sense of unease in the reader. 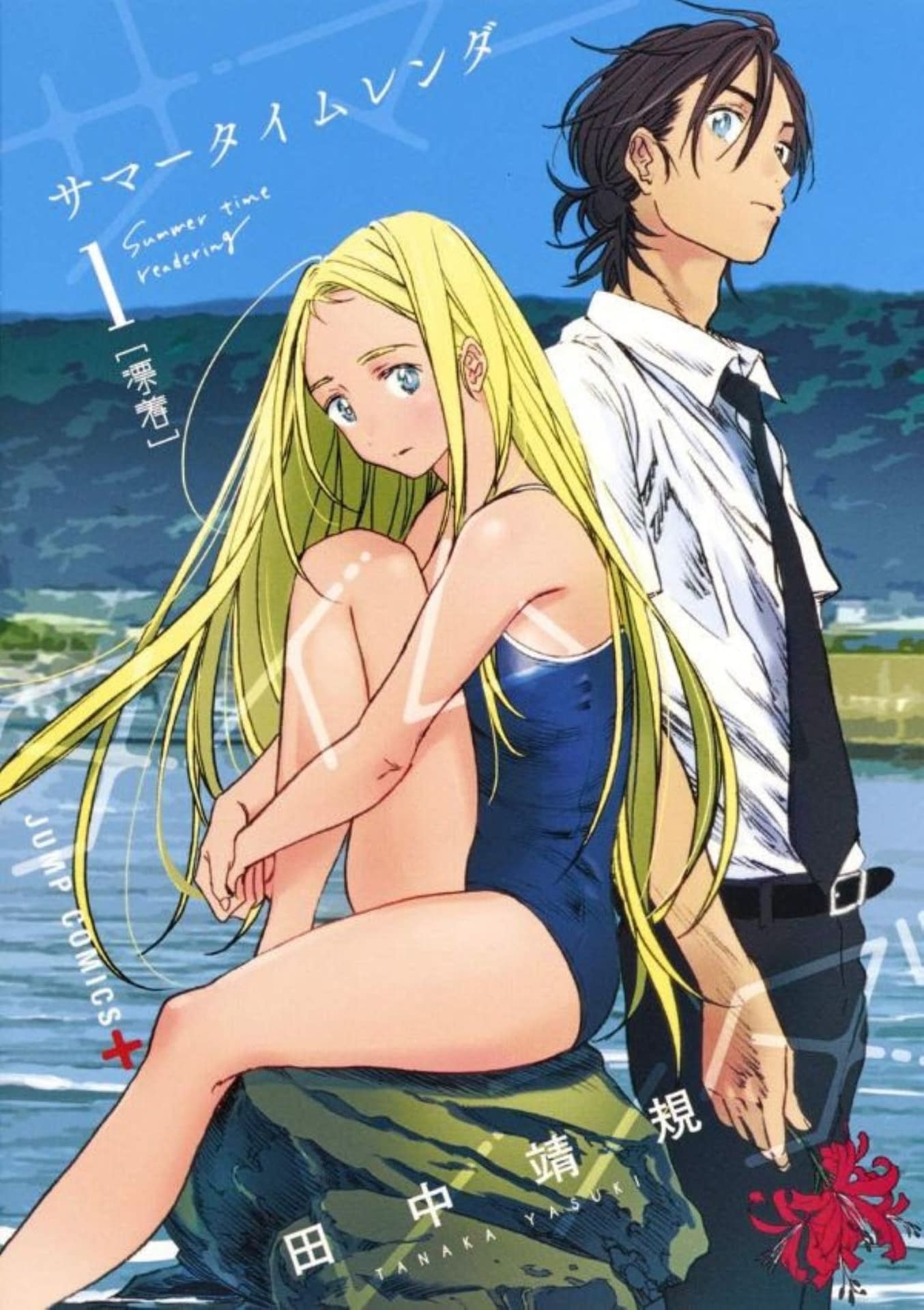 Overall, Summertime Rendering has been an excellent reading experience so far. While the characters could use a bit of fleshing out, and many mysteries have still yet to be explained, I have no doubt that the second volume will not disappoint in being as interesting as if not more than the first highly engaging volume.

Summertime Rendering Volume 1 will release on May 31, 2022. Volumes 1, 2, AND 3 of the manga will release in omnibus this June in both hardcover and softcover. Udon will release the manga’s translation and localization with bonus features, including all of the original color pages.

Are you interested in Sci-fi anime? What do you think of our review? Let Bago Games know your thoughts in the comments section below,

Summertime Rendering has been an excellent reading experience so far. While the characters could use a bit of fleshing out, and many mysteries have still yet to be explained, I have no doubt that the second volume will not disappoint in being as interesting as if not more than the first highly engaging volume.