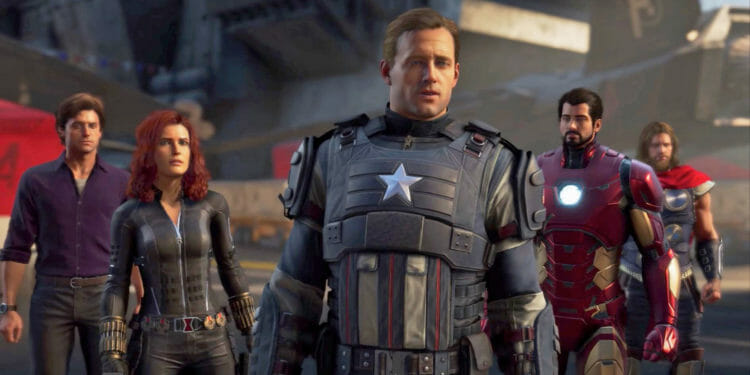 Marvel’s Avengers have come and gone, starting as a dis-jointed gathering of heroes to being a legendary collective of might and mind. Over 4 films have the Avengers built strength and unity to defeat several ultimate opposing forces.

But now, they have accomplished the job at hand (not a pun for Thanos’ gauntlet) and parted ways. Yet a video game adaption has been in the works for a lifetime, since the first movie’s release in 2012. It never came to be at the peak of The Avengers hype but now it’s finally coming out this year and this has a lot of fans excited.

But will it be worth the wait? Will fans still be interested in the original Avengers after Endgame and will Nolan North pull it off being Iron Man? Let’s see if the comics, translated into movies translate just as well into Video Games.

Getting the band back together

So this is an entirely new story, inspired and crafted from both the comics and films, we see The Avengers gathering in celebration of a recent victory. They’re altogether in San Francisco where out of nowhere, an attack occurs. Heavily armed individuals crash the celebration and take out the Golden Gate Bridge, devastating the city. Our heroes take action and with their best efforts, stop the attackers. However, one fatal blow is dealt and the Avengers are left disheartened and disbanded.

Suddenly, out of nowhere a new organization appears to take over things and everyone is cool with it. This shadowy organization enforces marshal law, roaming death squads and an iron rule that disposes of anyone that dares stand in their way. And yet the blame fell on the Avengers with most people chilling at the obvious bad guys.

While this is a preview and the main story points were spoon-fed to us, it seems as though the plot will be very weak. I mean, it’s filled with tedious and tired tropes and plot points which are laughable. It’s heavily implied that The Avengers are blamed for the attack, directly and indirectly.

Then a mysterious organization appears out of nowhere and calls the shots, blaming the Avengers and being so very obvious the bad guys here! Yet everyone is just like “Yep, we hate the Avengers” aside from Ms. Marvel who does step in to help out.

I just hate this tied and troublesome type of plot. Lending to the stupidity of the masses without any real substance behind why. The story doesn’t appear to be that compelling and comes off as rather generic, for comics, games and just in general. But there seems to be plenty of fan service (not the anime kind) and fans can see all their favorite heroes (and hopefully villains) in action.

That is my other concern that there won’t be a compelling villain. Usually, Marvel games like this don’t have great villains, unless it’s Spiderman and the first villain we see is …. Well I actually can’t remember who it is. I’ve never heard of him and he seemed extremely bland.

Cosplaying but much, much cooler (and less dangerous)

Thankfully gameplay appeared to be much stronger, with a great sense of pacing, structure, and flow of action. The opening allows you to play as all the main Avengers, starting with Thor, then Ironman, Hulk, Captain America and to finish things off with Black Widow. Each of our heroes has their own time to shine, with several fights and set pieces, each feeling quite fitting for the hero you’re controlling.

Thor is surrounded by a group of thugs and engages in close quarters combat. However, he manages to throw this bunch of pitiful humans around into cars and other objects like they were ragdolls.

Seeing him throw his hammer as lightning strikes with every blow was a great spectacle and you can throw his hammer in the same fashion of Kratos in God of War (2018). Thor’s section was good but his flow of combat was a little clunky and basic. It never came across as being as smooth as something like the Batman Arkham series or even God of War.

I am Nolan North!

Next up, Ironman who we see blasting his way through a collapsing section of the bridge (much like the epic set piece of Dead Space 2) to end things with a fight. Being confined in another arena, he has to fight off a group of armored thugs, tougher and more dangerous than the last bunch. However, with some neat tricks, including an almost atomic laser from his chest, Ironman manages to take care of the thugs.

Another good section as Ironman’s ability to fly made this more entertaining and added an element of transversality to combat. Shooting enemies was a little flat but using the special abilities was much more epic. I think Ironman’s sections could be a little more structured around fighting much tougher enemies such as giant robots and flying through dangerous situations. This will play to the strength of this character extremely well, rather than fighting grants.

We have a Hulk …. And excellent gameplay!

Next up was Hulk and what Hulk does is smash, charge and smash some more. Hulk was, in my opinion, the most fun even if it was simple, it was an absolute blast. Just simple, pure and amazingly fun! Smashing, grabbing, throwing enemies and jumping to epic heights in the air was eye-melting!

I can imagine if the developers create enough interesting set pieces and some great boss battles, Hulk could be the unsung hero of this game. It was the most balls to the wall video game section ever and it was the most fun.

Next up the Cap! Captain America had by far the most fluent combat and while the arena and enemy selection was a little uninspiring, he certainly had the moves. The flow of combat, pulling off counters, his attacks and throwing the shield made the Captain’s section more interesting and enjoyable than it should’ve been.

While nothing special, this felt like Captain America had the same style to Batman in the Arkham series. It felt like that one scene where he fights all those bad guys in the elevator.

The un-coolest Avenger sadly is…

Now to the last Avenger which is sadly the weakest. Black Widow’s section was by far the worse as she offered very little in terms of interesting combat or gameplay mechanics. It also finished on a boss battle that went on way too long. It ended up being a tedious and dull confrontation.

This boss boiled down to fisty-cuffs, figuring out his many attack patterns and openings, deciding on what to do at that right moment to deal some damage. It was a little long as it was never clear on what you had to do. Ended up being three different things you had to do to defeat this crazed villain. This boss battle was just lame and I’m hoping none of the other bosses are like this.

So The Avengers has been a long time coming and from what I’ve seen, it’s very promising. The classic line up is more than enough for fans and each of the iconic heroes has enough time to shine. I hope that certain characters get the right set up for encounters, playing to their strengths and making the most out of them.

Thor needs to fight an army of enemies to match his power. Ironman needs to fight more advanced and robotic foes that are complex in design. Hulk just needs to smash everything and platforming sections will serve his style well. Cap, we Cap needs intense and brutal melee combat sections to build on his strengths.

Then we have Black Widow who again can do well with intense encounters that focus on melee. Or stealth sections would be great too. Just not bosses.

Now I played this preview back late last year and as you may be aware, Marvel’s Avengers is delayed till September. My time with this preview was a lot of fun, but I can see if certain problems kept popping up, then the overall experience would be like a 7/10.

Maybe this is why it’s been delayed for several months? To hopefully fix some of the issues I saw on my original playthrough? These include potentially bland boss fights, underwhelming combat sections where the hero feels out of place and should pretty much wipe the floor with the bad guys and hopefully, more Hulk sections. I would be stoked at an extra mode where you play as just Hulk.