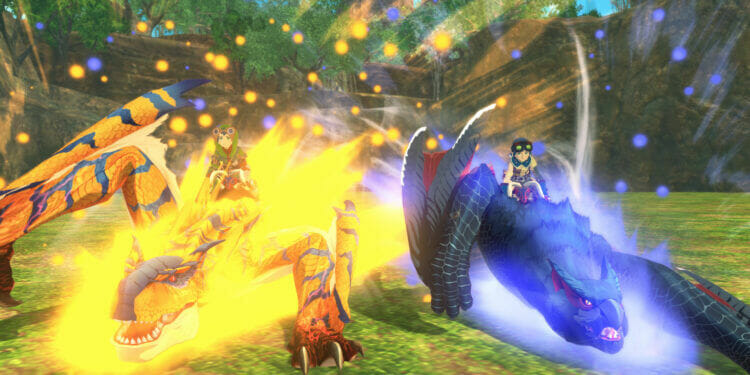 Monster Hunter; one of Capcom’s highest-selling series. Originally starting on the PlayStation 2 back in September 2004, the series has evolved, including new mechanics, new weapons, new monsters, and more ways to play the game. Eventually, the series came to rival consoles, such as the Wii U and Xbox One. 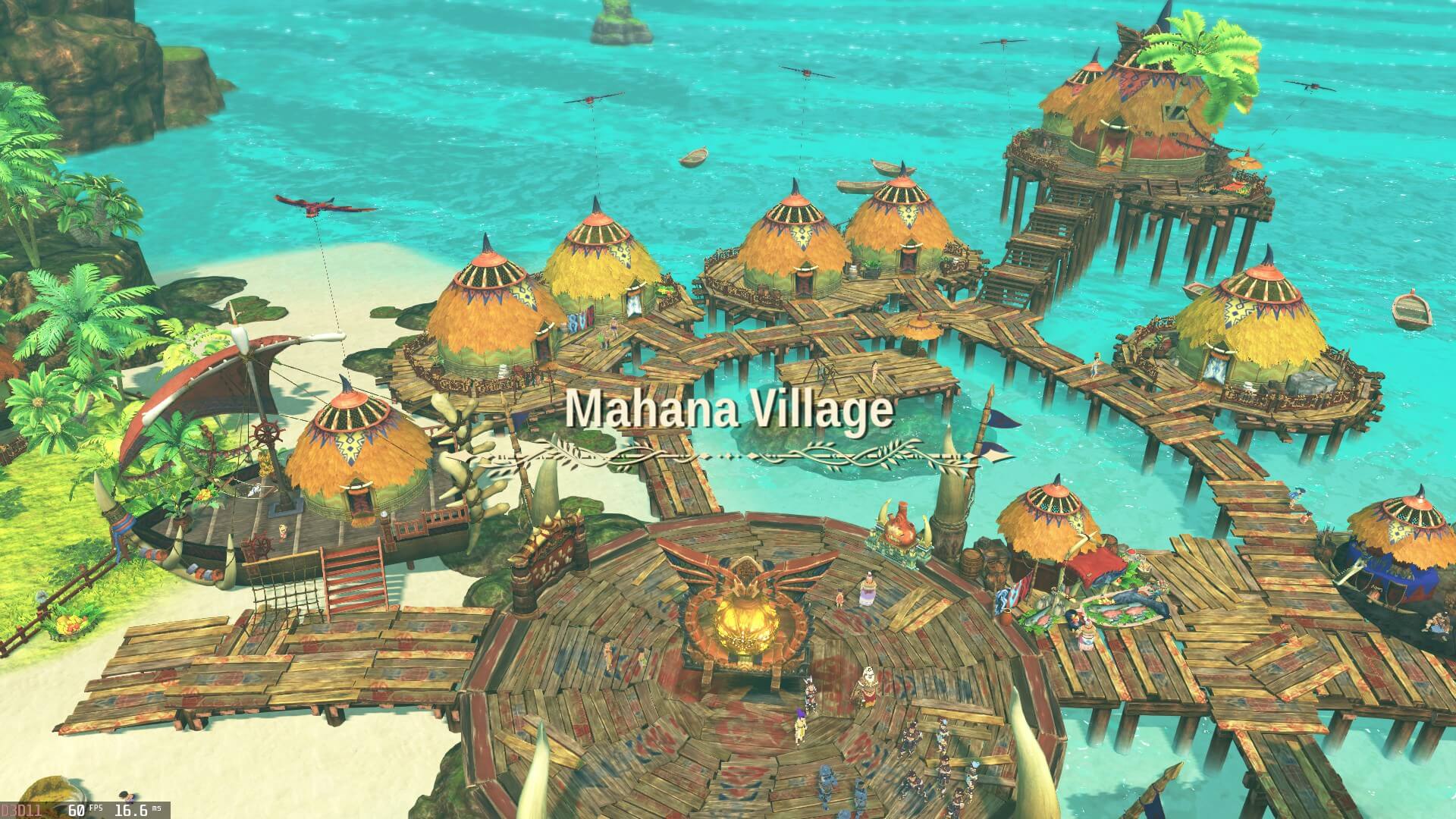 The game starts in Mahana Village (shown above) and serves as the player’s hometown, similar to other games. Rathalos have been disappearing from the island throughout the game, and it’s up to you and your Monster companions, known as Monsties, to find out why.

Gameplay follows a similar beat throughout the adventure. Main Quests have to do with the story mode and involve you taking your Monsties as you explore various regions of the island. Some quests may involve you hunting specific monsters for materials to upgrade your armor and weapons, You also go around retrieving items that NPCs want. Sidequests are permeated with tasks like these, in traditional RPG fashion.

Exploring dungeons is also another key part of the game’s exploration and your primary source for unlocking new Monsties to use. At certain areas of a dungeon, you’ll find Monster Dens, which house a pile of eggs. You can pick any one egg and when you leave the area, the egg is sent back home, and then you can return to the dungeon you were in.

Otherwise, dungeons behave largely like they do in any other RPG; you enter, fight any roaming enemies, get EXP and level up, the usual paces. That said, let’s talk about the combat some more. 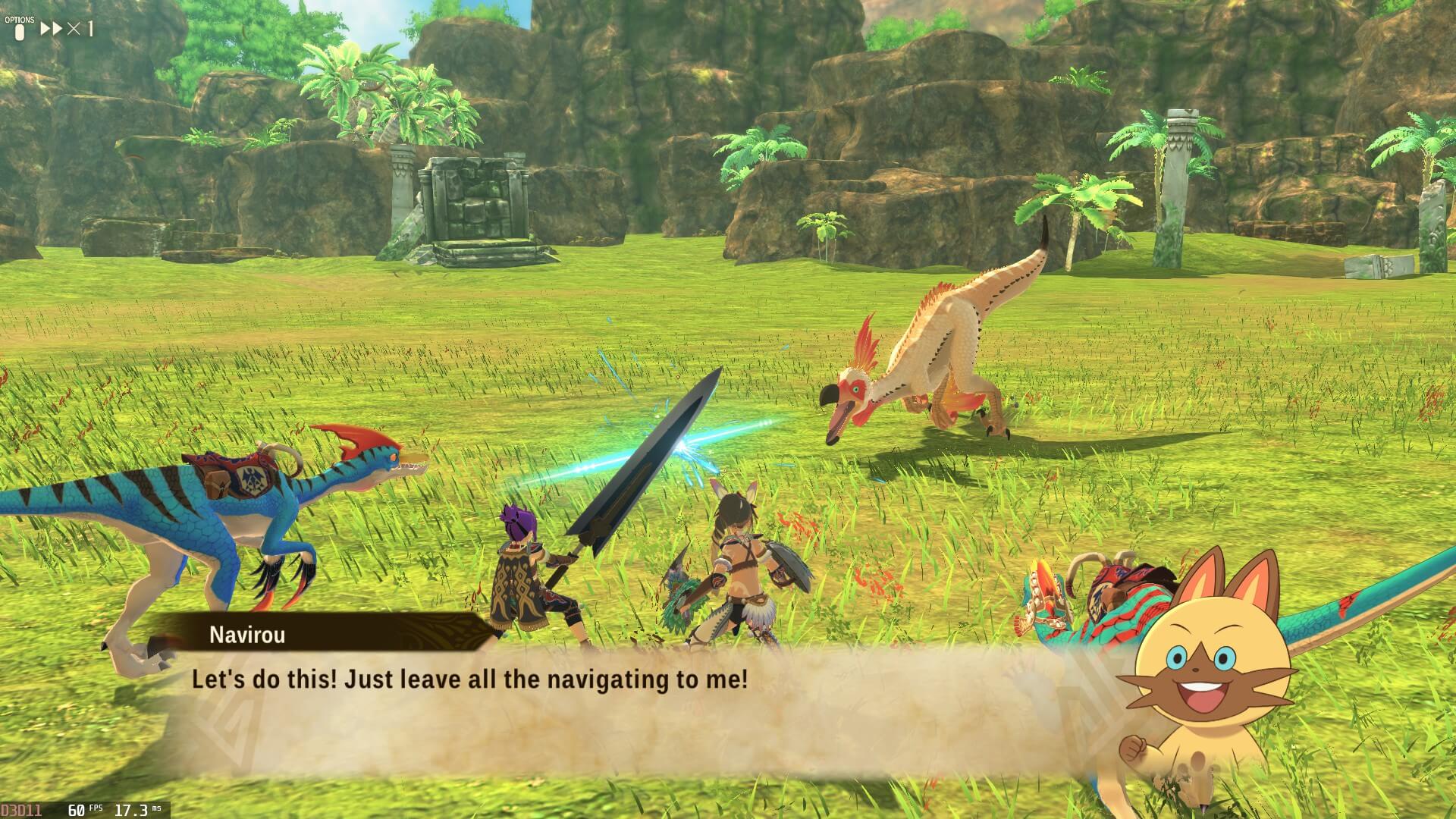 Stories 2’s combat hinges on being a turn-based interactive experience, akin to classic games like Final Fantasy I or II. The game’s unique mechanic in battle is the Kinship system. Kinship works similarly to the Personas of, well, Persona. Each Monstie has its own skills, elements, resistances, stats, etc., and you can swap them out freely in battle or back at home.

Every single attack in Monster Hunter Stories 2 has an attribute and it behaves like a weapon “triangle”. Power, Speed, and Technical. Power beats Technical, Technical beats Speed, and Speed beats Power, and when you connect with an attack that beats the defender’s type, you deal bonus damage. 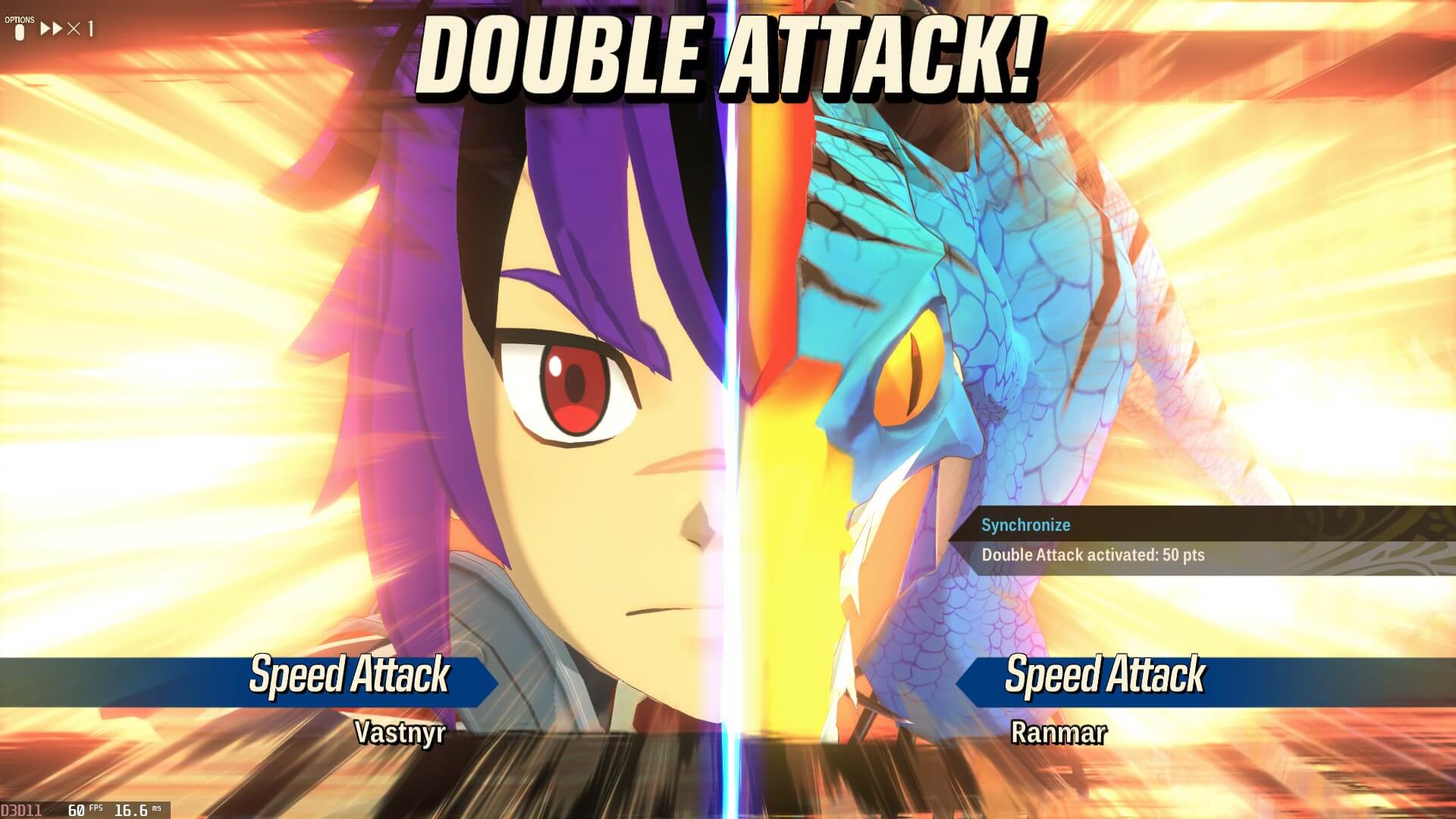 How All These Mechanics Come Together

Taking advantage of these traits will be integral in completing battles with the least amount of trouble. Double Attacks are another piece of the puzzle and triggers when you and your Monstie pick an attack of the same type and it wins in the Weapon Triangle. On a successful use (indicated above), you deal even more damage and have a chance of knocking the Monster over, allowing you to score critical hits and break Monster Parts easier.

Kinship also comes in the form of riding your Monstie to perform additional attacks. Attacking while on your Monstie will allow you to use unique skills and when your Kinship Gauge, indicated to the right of your health, is maxed out, you can unleash a super attack that does massive damage.

Combat is also very merciful in comparison to other RPGs on the market, as every unit has three hearts underneath their health bar. Not only are healing items in abundance here, but if your health bar reaches zero, it consumes a heart and you get right back up. Hell, it even increases the charge rate of your Kinship Gauge after the fact, too. When all three hearts are depleted and you get K.O.’ed again, that’s when the battle will be considered a loss. During our Monster Hunter Stories 2 review time, it’s happened only once. 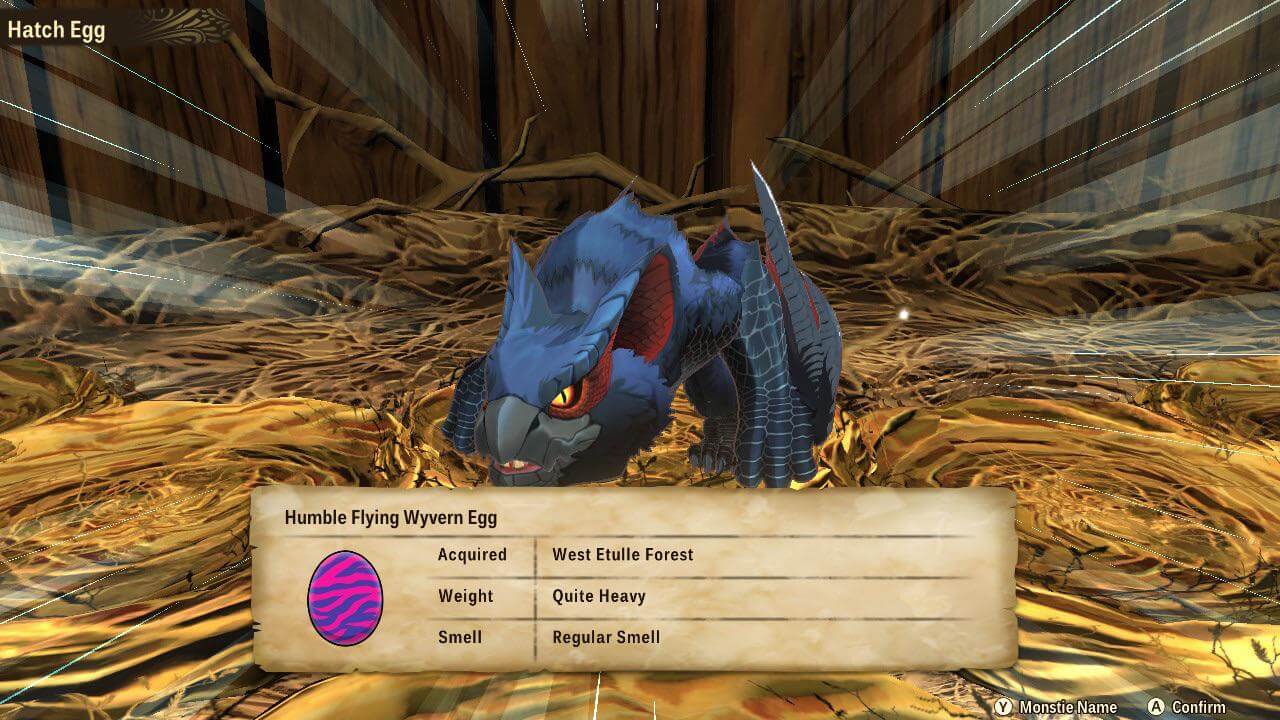 Monsties and Their Abilities

Aside from the generic tools Monsties own, like attacking, access to the weapon triangle, among other things, most of them are unique to one another. Upon hatching a Monstie, they’re assigned random Genes that augment their abilities, and then you can take them on your adventure.

Genes can range from various categories, like boosting attack, to giving new skills, and raising stats. There are also Rainbow Genes that grant hidden effects, but they’re significantly rarer than other Genes. Partway through the game, you can unlock the Rite of Channeling, which allows you to transfer Genes and skills from one Monstie to another.

This basically means that to put it simply, take a fire-based Monstie like Glavenus; you can use the Rite of Channeling to give it elements it normally cannot have access to, like Thunder element, for instance. It leads to a ton of potential set-building and creativity with your companions.

Go It Alone, Or Travel Together

Midway through the game, you’re given access to multiplayer, and you may wonder, how does Multiplayer work in this game, exactly? Well, after reaching the second village and completing a few story missions, you can go on Expeditions with friends and other online players, which is actually great.

You can also battle other players, where you and three Monsties go up against another player in similar conditions. Level balancing is ALSO there, meaning you aren’t gonna be held back unless you explicitly aren’t training your Monsties. The multiplayer, to be frank, feels like it’s exactly how Pokemon Sword and Shield’s multiplayer should have been.

Co-op Expeditions can also be completely broken, and don’t worry, it’s not in the fashion of “the game fails to function”. No, it’s more so that farming can be extremely easy, borderline effortless if you and another player are hunting a monster with a type disadvantage relative to your party for XP and material grinding. 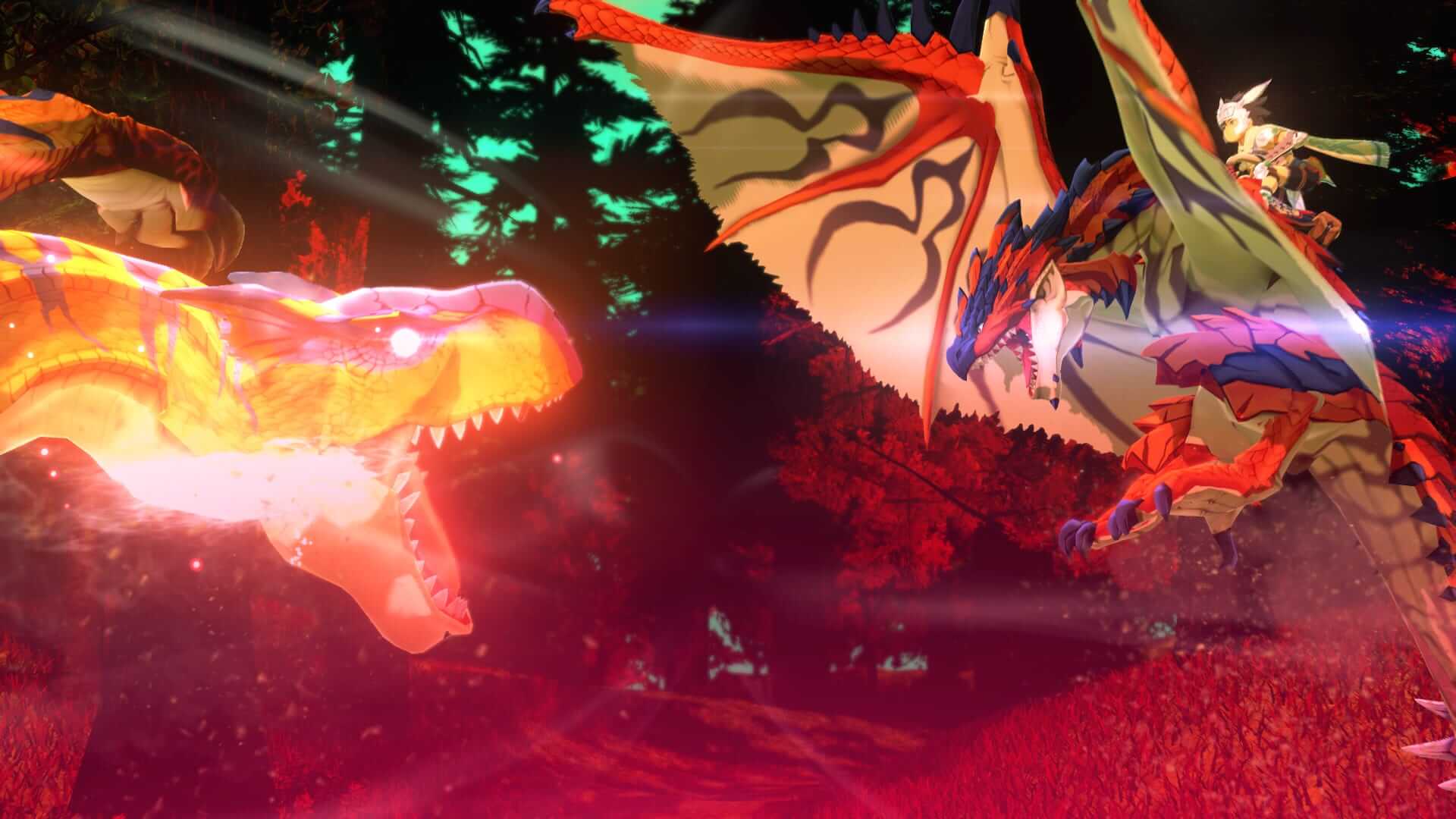 Given what we know about Monster Hunter Stories 2, what can we call it? Well, in my opinion, I think it’s everything Pokemon Sword should have been, and I say that having sunk tons of hours into Sword unapologetically. However, I say that not as an insult to Sword, and more as a reflection of what that game could have been, had it more time to develop.

The game’s pretty neatly tied together, and it’s just really solid. However, it can kind of drag sometimes when it comes to level grinding, but that’s just a metric of tons of JRPGs, you have to grind sometimes. That sentiment aside, should you buy this game? Absolutely, it’s a very solid experience to just kill time on.

The game is actively receiving updates, which makes it clear that Capcom, or some team at Capcom, very much cares about this game. And in this industry, that’s a nice thing to see and hear.

Monster Hunter Stories 2: Wings of Ruin is available now on Nintendo Switch and PC via Steam.

What did you think of our Monster Hunter Stories 2 review? Did you like the game? Is there anything you didn’t like? What would you want to be added or changed for the game? Let us know your thoughts in the comments section below.

If you liked this review, you can read our review of the previous Monster Hunter Stories game here.

Monster Hunter Stories 2: Wings of Ruin has a very charming look with vibrant colors, engaging gameplay, and sprawling worlds to explore with a gameplay loop that gets easier the more you experience it.