Mothergunship Review: Son of a Gun 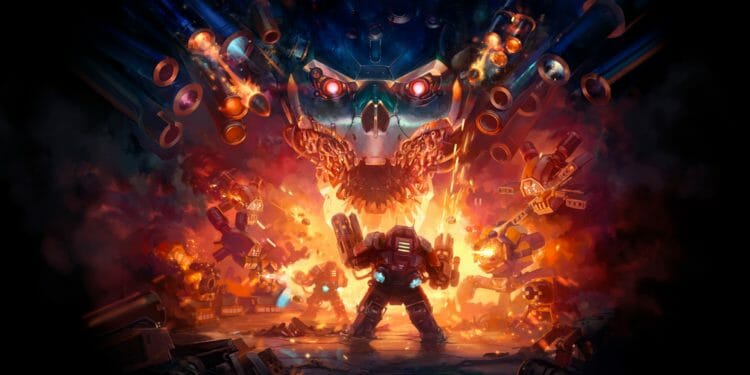 I don’t know how to feel about Mothergunship. It’s a game that has a lot of promise to it but then also has a lot of disappointment. That’s not to say the game itself is bad, but it really fails, in my opinion in some vital areas. Areas that really seem to suck the enjoyment out of these types of games for me, and that’s unfortunate because, I sort of love Mothergunship.

Mothergunship is an indie studio title by Terrible Posture aka Joe Mirabello, the same developer of the indie FPS title Tower of Guns. (You guys should play that game, it’s really good.) While Tower of Guns is a proper roguelike, Mothergunship makes a few changes to the formula that unfortunately seem to be to only it’s deficit rather than benefit.

The writing is actually the highlight of the game, the characters are portrayed rather silly, but the game knows not to take itself all that seriously, which makes it much more enjoyable in my opinion. I’m not sure how to describe it other than that Mothergunship’s writing shines. It has an irresistible charm to it, and honestly is what I enjoyed most about it. The few characters that drive the plot of “destroy all the ships” was funny enough that it kept me going just to see what they said next. Besides that, the actual writing is pretty much just that, a comedic excuse to entertain you with an otherwise simple plot that keeps you moving forward. It accomplishes all it needs to really, and works for what it is. 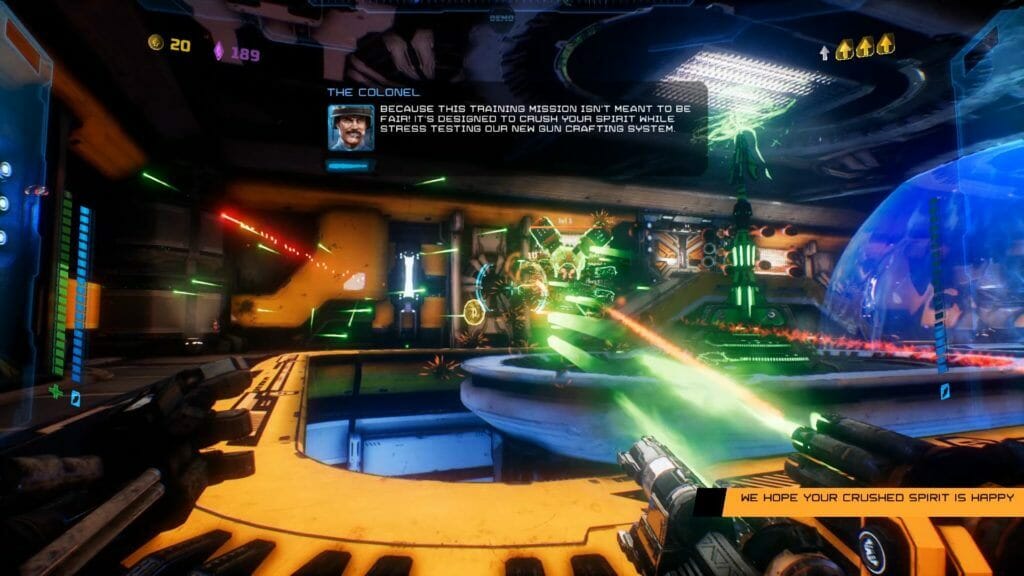 (The dialogue and visual gags are pretty great)

The graphics are fine as well, giving it a sci-fi feel that still isn’t necessarily realistic, but it doesn’t look low budget. The game’s graphics are actually rather impressive when they need to be, and are rather impressive for an indie title. The game has a sci-fi metal chrome finish almost, where every enemy is robotic with a variety of different projectiles and gimmicks to them. The effects look good, and it’s great because it’s pretty easy to see projectiles and what you are trying to dodge.

The game itself is set up like a rogue-like, but not necessarily what you think when you think rogue-like. Instead of starting from the same point every single run, you choose missions that you have different rewards for. Now, this concept wouldn’t be so bad, but other design decisions limit it significantly and I will explain why in a second. 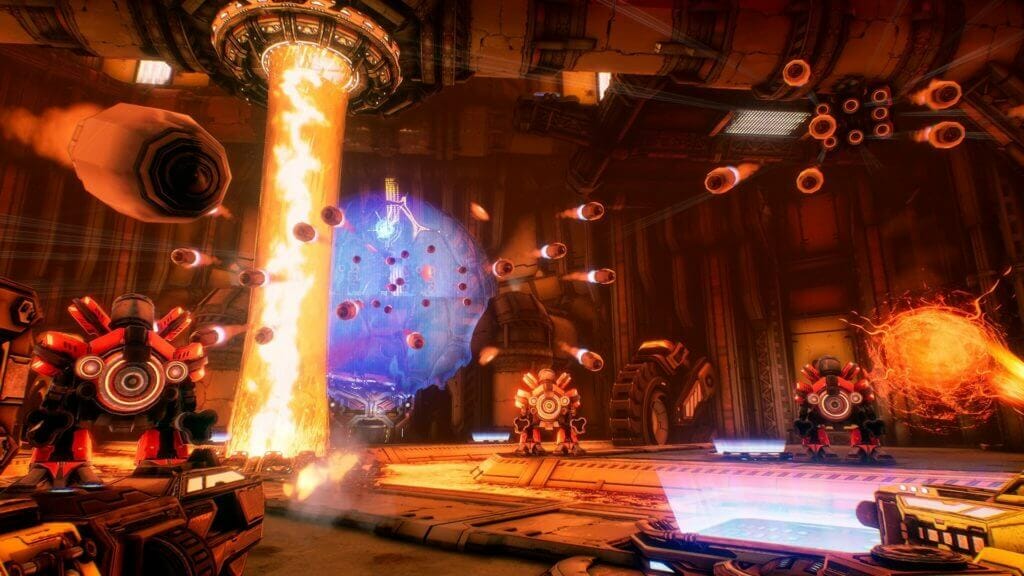 As well as choosing a mission to complete, you then need to choose which pieces from your collection to combine together. Every time you do a mission in Mothergunship, whatever gun parts you collect while you complete the mission get added to a collection you have in the overworld. This is unusual with a rogue-like game because of the fact that this means you actually have a sense of progression, which most rogue-like games tend to avoid. Now that itself wouldn’t be so bad by itself, since you can keep gun builds you like, but as you progress in missions, enemies end up getting harder as a result that it assumes your collection is growing as you collect more and more guns. The kicker here is, when you die, you lose all your gun parts, including the ones you started the mission with, which a lot of times can be devastating. I will explain why this is so once I talk about the gameplay and tie it all together.

The gameplay itself is a first-person shooter with controls that resemble an early FPS like Quake or Doom. Your character moves really fast and slides around really quickly, the jumps being short and feel good and help maintain your momentum. Even though you choose specific missions for completing, the game itself randomly generates rooms for you to move through, and you can usually choose from 2 or 3 different doors that tell you what kind of room it will be. You can skip rooms that you feel might be overwhelming, but you won’t gain currency that way, although you will save life. While you are defeating enemies, they have a chance to drop coins, which you use to buy gun parts, jump upgrades, which give you an additional jump on that run, health upgrades, which increase your life bar, and simply more health which fills your life bar back up so you don’t die. In addition to the coins, the rooms will also randomly spawn shops that you can buy guns and parts from, but a lot of the time I found myself not really wanting anything in the shops and there is a specific reason why.

The game is built around a system that has a huge glaring flaw though, a lot of the guns simply don’t do enough damage for how hard they are to hit, and you find yourself trying to hoard specific pieces because you know those guns work really well while a majority don’t hit the enemies like you need them to. The game’s enemies can be separated into two major types. Small swarm enemies don’t have high health but there are usually a lot of them so they are hard to hit with guns that are inaccurate. On the opposite end, there are big enemies with large guns that have a lot of health but are easy to hit. A lot of the guns simply don’t feel like they deal enough damage and although if you combine the guns together with the gun building system, which allows you to take gun parts and make really large weapons with multiple bullet types on them, there are guns that are obviously better than others. 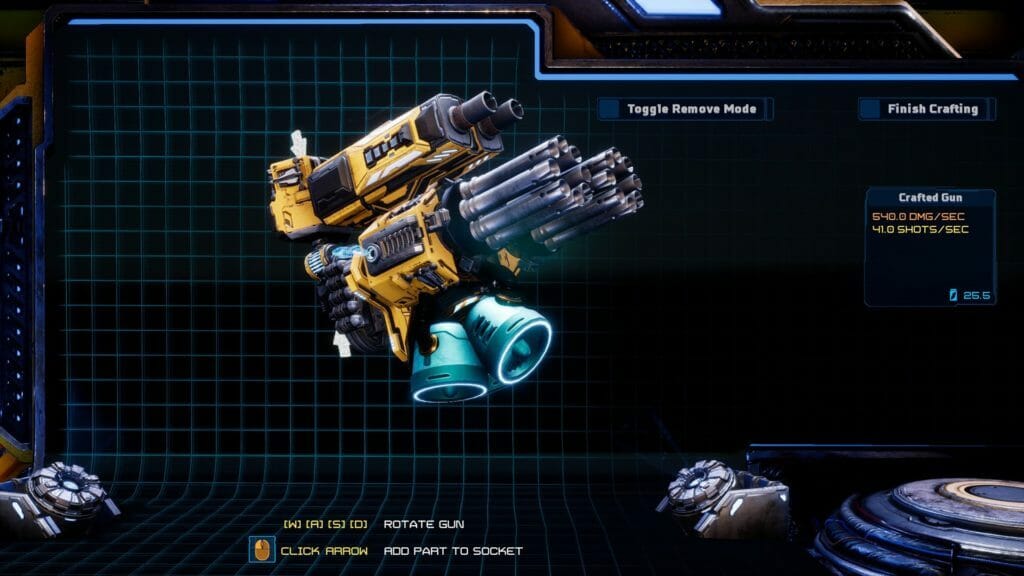 (The gun customization is pretty good, but some guns are way more effective than a majority of the others, while some don’t deal enough damage for how hard it is to hit enemies with them)

I found myself trying to hoard the same guns, and feeling devastated whenever I lost them because of how hard it was to accurately find them. Near the end of the game, I would play for an entire night and not get the gun pieces that I need from the missions, which honestly was really frustrating. The fact that I had to progress but needed at least good guns in order to do so really kind of undermined the fact that this was a roguelike. To be fair, I think that this was only a problem for a mission that was added in the free update expansion, but I felt like this became an issue in the regular endgame as well.

Even when you don’t equip any guns, rather than getting a simple pistol or small gun, you have to use melee strikes, which is rather ineffective against enemies with ranged weaponry. It really is the small design decisions that hamper what could be an overall fantastic experience, and the game really shines the most when it’s played like a true roguelike, but the design decision to require some sort of progression system that can also undermine your progress and cause you to endlessly grind for parts is frustrating and really kind of ruined the experience for me. It’s even more frustrating because I really liked everything about this game from the controls, to the art style, comedic writing, and even the gun combinations you can make.

In conclusion, Mothergunship is a good arena based FPS that is let down by some design decisions that can hamper the experience, but overall I think is worth your time. There is so much going for it, even its price point, and is something that good enough to enjoy as long as you can look past the few problems that are presented due to design choices. I hope that Terrible Posture learns from feedback and what didn’t work in this game and continues to work with what does, because they could make another fantastic game that I will look forward to playing.

Mothergunship is a game with good visuals, writing, controls, and gameplay, but held back by some design choices that make it frustrating to play sometimes.