by Daniel Newton
in Tech
0

The gaming peripheral wizards over at Nacon have released a brand new Pro Controller, this time a premium option for Xbox and PC. We’ve taken a look at a few different Nacon controllers here and after reviewing the Pro Compact — a somewhat more budget pro pad — I was very interested in checking out a fully featured option over on the Xbox side. Nacon advertises the Revolution X as “The perfect premium controller for competitive gaming on Xbox Series X|S, Xbox One and Windows 10 PC.” so lets take a look and see if it lives up to that. 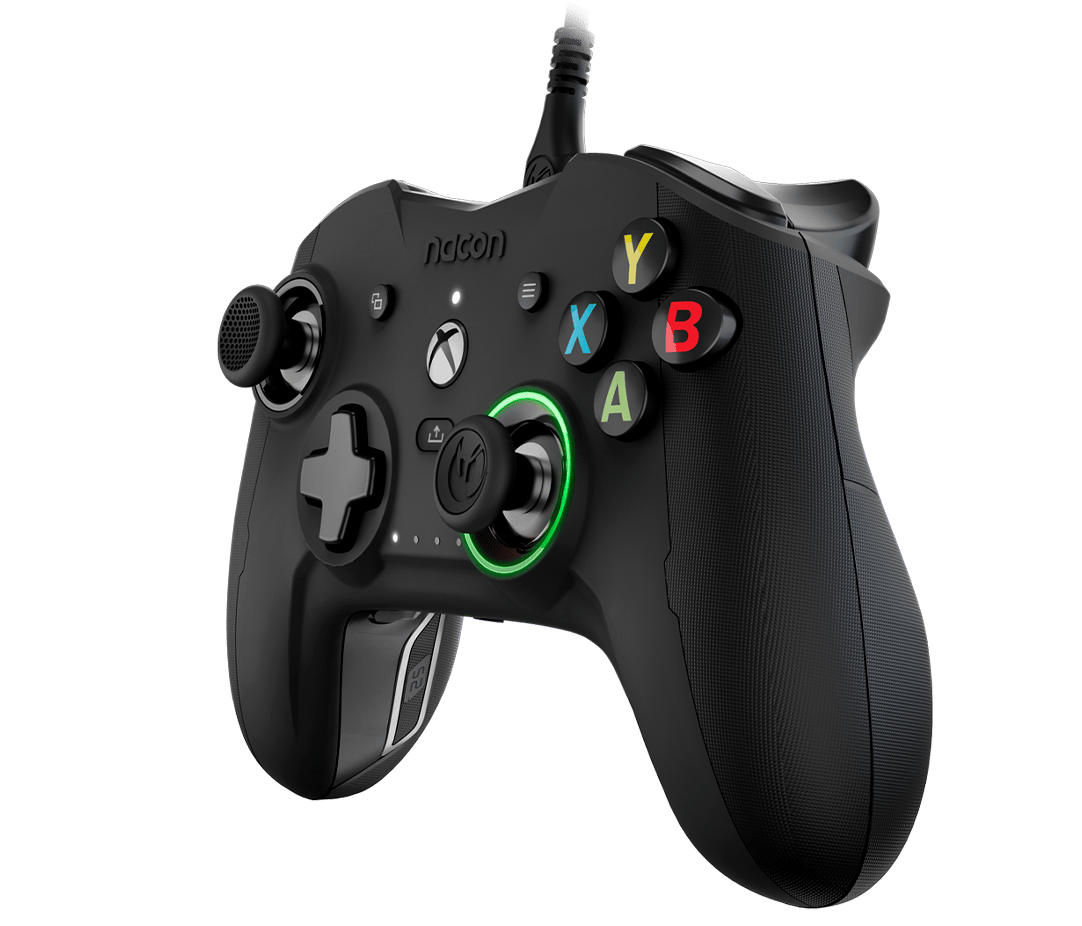 The Revolution X is a matte black controller featuring silver thumbsticks with the signature Nacon designs on black caps, white LED indicators for power and settings profiles, and a customisable LED ring around the right thumbstick, just like the Revolution Unlimited Pro controller we reviewed previously. In fact the X shares many similarities with the Unlimited and the other controllers in Nacon’s “Revolution” line. Compared to the Unlimited it does miss out on a few of the more luxurious features of that pad like the rubber coating and wireless connectivity. In exchange though, the Revolution X is quite a bit cheaper, so while I personally think any controller over £60 or £70 should probably have a wireless option, that mostly seems fair.

As opposed to the aforementioned rubber coating, this controller has matte plastic on the front and textured plastic down the sides and lower back of the handles for extra grip in those long gaming sessions. I rather like the etched-in lines where the textured plastic meets the smooth face of the controller, the detailing has a subtle futuristic look.

Pictured above: Revolution X Pro next to the Pro Compact and Revolution Unlimited Pro

Unlike the Pro Compact, this is a full-sized controller and fits nicely in larger hands. Compared to an official Xbox One pad, the X is ever so slightly wider and the controls on the left and right are spread a little further apart. There are four programmable back-buttons which I admittedly hit a few times by mistake to begin with, but you quickly learn to adjust your grip to avoid that. I mentioned this in the Pro Compact review but I’m personally not the biggest fan of the look of the face buttons and guide button. With the glass-like buttons of the official Xbox controllers (and now Sony’s DualSense too) I can’t help but see these buttons as a little less premium-looking by comparison, and the guide button doesn’t light up. That’s certainly nit-picking though and is more than made up for by the very cool LED ring.

One thing I’m happy to see changed from the Pro Compact is the placement of the view and menu buttons, they’re more central now so you no longer have to reach over the left thumbstick to press view.

I don’t want to repeat myself from my Pro Compact review too much, but like that controller the sticks feel smooth, all of the controls feel responsive and the d-pad isn’t ultra-clicky. The controller has nice, strong vibration including separate motors in the triggers just like official Xbox controllers, which is always good to see as some third-party controllers skip out on that feature. Like the other Nacon controllers we’ve reviewed, the Revolution X has very solid build quality, as you should expect.

Like the Pro Compact, you’ll need to download Nacon’s dedicated (and of course, free) “Revolution-X” app on Xbox or PC to tweak all of the settings and custom profiles. A switch on the back of the controller flips between the standard “classic” mode and “advanced” mode, and a profile button lets you instantly switch between 4 different advanced profiles, each of which can be customised individually.

You can remap the controls, adjust the response curve of each thumbstick, the travel distance of the triggers, choose between a 4 or 8-way d-pad, adjust how strong each of the rumble motors are, and invert, swap or tweak just about anything you can think of to get the exact control experience you want. The 4 back buttons can of course be programmed to act as any of the face buttons, d-pad up, down, left and right, stick buttons, triggers and bumpers. The only buttons you can’t mess with (at least in this app) are the view, menu, share and guide buttons, which is understandable.

Surprisingly there’s an audio menu which allows you to tweak the output of the 3.5mm headphone jack to your liking. I say surprisingly because the controller includes a built-in Dolby Atmos license so you can download the Dolby Access app and tweak the audio in much the same way there. This does allow you to keep those audio settings on the controller itself though, which is handy if you use it on multiple consoles or PCs, and once again this can be done for each of the four custom profiles. Dolby Atmos itself enables virtual surround-sound through any stereo headphones and in the case of video games allows you to more accurately pinpoint things like enemy players surrounding you in shooters for that extra competitive edge.

I felt this needed a separate section. The LED ring is very cool and has been a staple visual feature of several of Nacon’s Pro Controllers for some time now. It has four quadrants which can all match or can be set as different individual colours which blend together nicely. In addition to the colour options you can change the overall brightness and choose between a few different effects like a pulsing effect or having it change between all of the colours.

This is a fantastic feature overall I just want to point out a couple of issues I had with it. Firstly the pulsing effect (which slowly fades the LEDs to off and then back to full brightness and repeats) doesn’t always work properly when individual colours are selected for each quadrant, unless you’re on the fastest speed setting. At the lower speeds the fading falls out of sync and doesn’t look quite right. Perhaps this could be fixed in a software update or maybe it’s just something to do with how the LEDs work, I’m unsure.

The other issue is perhaps nit-picking but… you can’t select green. This is bizarre to me firstly because the promotional images for this controller all show it with the green ring and secondly because it’s an Xbox controller. Green is the Xbox colour! To be clear the ring is completely capable of producing green – it’s used for the “classic” mode and the ring cycles through all colours including green when the “Prism” effect is selected, you just can’t select it as a custom colour. I can only assume Nacon wanted to keep it separate for the classic mode of the controller to avoid confusion, but honestly I’d like the option regardless.

Anyway, those minor issues aside I have to reiterate that the LED ring is very cool. In the end I settled on having the ring set to fully lit with four different colours for my primary advanced profile, which looks great alongside my PC with all of it’s RGB lighting. The ring can have different settings for each of the four advanced profiles.

One last note about the customisation app is that it mostly works completely fine, but occasionally stops working or stops registering inputs and you have to reconnect the controller and/or reboot the app. Not a huge deal and your mileage may vary with that, but it is something to note.

On top of the vast software customisation, this controller comes with a nice little plastic case filled with a variety of weights and swappable thumbstick parts to help customise your gaming experience further. The first thing I did when I got the controller was immediately add the heaviest weights to the compartments in the back, three set are available – 10g, 14g and 16g weights for each side to add up to 32g to the pad in total. The controller without any weights is 233g according to my scales which is almost exactly the same as a standard Xbox One controller (sans batteries) so adding the weights is comparable to getting the added heft of adding batteries to an Xbox One pad.

As for the thumbsticks they have concave caps by default but you can switch to convex caps for one or both sticks if you prefer. There are also two sets of rings to fit over the sticks to increase their thickness, which in turn changes the travel distance to the outer edge. This can either prevent you from pushing the stick to 100% in any direction (handy for making sure your character only walks and doesn’t run in a stealth game, for instance) or when combined with custom settings in the software you can simply change how far the sticks need to go to hit 100% and limit yourself from physically pushing them further, making for snappier inputs/quicker responses.

Unfortunately there are no swappable parts for the d-pad which is a shame considering the official Xbox Elite controllers come with different styles you can swap between. The d-pad in general, while it’s perfectly acceptable, isn’t really anything too special beyond having the ability to switch between having 4-way or 8-way directional input in the settings.

Lack of wireless connectivity and minor gripes aside, I have to say Nacon has offered up a great addition to the Pro Controller market with the Revolution X Pro. This controller is rock-solid, provides a wide array of customisation options and could well give you the edge you’re looking for in competitive games, whether they’re shooters, racing games or sports games… just maybe skip out on it if you’re purely a hardcore 2D-fighter enthusiast. But hey, you probably have a dedicated fightpad or arcade stick for those games anyway. I would certainly recommend this controller for anyone wanting to up their game from a standard controller for Xbox consoles or PC. You can order yours today for £89.99 from Argos.

And you can carry your controller around in style with the included carry case with a micro-fibre cloth to keep it clean, isn’t that nice?

Thanks so much to Nacon for providing this controller for review.

Another feature-packed, well-built, versatile controller from Nacon to answer most if not all of your competitive gaming needs on Xbox consoles and Windows PCs.