One Punch Man: A Hero Nobody Knows Review

He'll be here any minute now

by Abdul Saad
in PS4 Reviews
0

One Punch Man: A Hero Nobody Knows DEALS

The first thing that came to mind when I first saw the announcement of One Punch Man: A Hero Nobody Knows, was that I had to play this game for myself. I’m a massive fan of Japanese fighting games and anime, so when a series decides to incorporate one of anime’s most titular superheroes called “The One Punch Man” into a fighting game, I thought it would be funny to see. I knew I was right the moment I punched a monster as Saitama.

By any means this isn’t a balance issue nor is it a complaint. One Punch Man: A Hero Nobody Knows, knows what it’s aiming for and who’s going to be playing it; mostly fans of the anime like myself. The absurdity and slapstick humor the anime is known for is what it brings to the table. Now regarding the balancing issue, the game tries to fix these by introducing enough elements and superheroes before we even get to see Saitama in action. This isn’t a game about him, just a game that includes him.

You start with the generic character you create, the creation system isn’t as deep as say Code Vein, but it gets the job done. You give your character a given name and a superhero name, then after your first encounter with Saitama, you’re thrust into the nitty-gritty of being an everyday hero.

You start out as a rank C hero, the lowest of rank, similar to the anime. After you finish some tutorials, you are then tasked to complete some quests. Play enough of these, and you a start to unlock the sections and areas of the map and gain city contribution points. 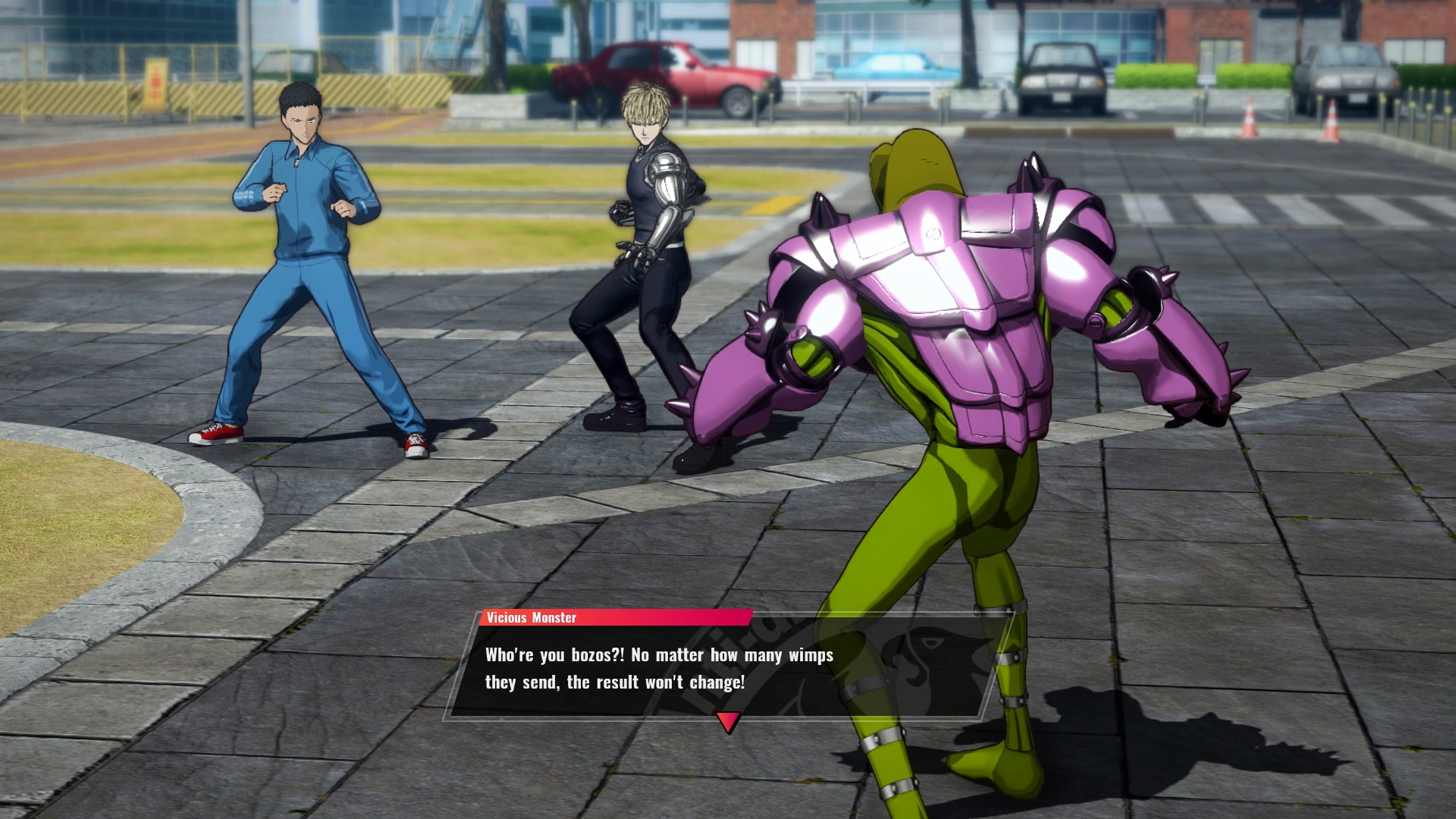 It’s quite an interesting system, similar to what you find in Dragon Ball: Xenoverse. Then we have the combat system. As stated earlier, the game tries to balance you being a weak up and coming hero by providing other popular heroes to back you up based on a counter. Do poorly, and they’ll take a while to appear. I found this system confusing, as realistically, it would be the opposite. As you wouldn’t slow down because a rookie was doing poorly.

Also, by the time Saitama arrives, you’ll probably either be defeated or done with the fight as his timer is always painfully slow, but of course it is. It’s Saitama. He’s always fashionably late. Though I applaud the fact that there is a significant difference between yourself and another hero. They have more health, they hit harder, and have more special moves unlocked.

Despite its simplicity, I found the combat fun. Once you get the hang of it you can always juggle your opponents in the air (if you’re good enough) with combo moves in quick succession, which is always nice. Sadly, the gameplay is still a bit dulled by the simplistic animation.

You won’t find any depth with the characters as they speak, as it doesn’t take you long to realize it’s all the same gestures again and again. The performance issue also didn’t help either. While moving around, you’ll notice the frame rate dip constantly. It’s not jarring, but it’s quite noticeable. The voice acting is ok when you actually get to hear the voices as most of the game’s dialog is all text-based.

Asides that, the combat can be a bit slow at times, especially when multiple things are happening in the arena. Another gripe I had, is the game making me go through countless quests to unlock main missions. I hate when a game does that, as it gives the impression there isn’t enough content, so it tries to make up for it with padding. By my 12-hour mark, I hadn’t unlocked most of the characters and modes. This might just be my playthrough, but I found it tedious nonetheless.

Other than that, the combat system is the same as most games. There are heavy attacks, weak attacks, and killer moves; the game’s version of ultimates. You unlock them as you progress through slots. You can also update or change your hero types. For example, All-rounders have mobility and average attack power, while brawlers are typically slow but also hit hard.

Then we have Weapon wielders like Metal Bat. They’re quite strong and have range on their side. Then there are the big guns like Genos, who have the option to use heavy projectiles. You can unlock Superheroes when you meet them around the city and help them with tasks. Doing this also improves your social standing with them (get all the clout.)

Through gameplay you’ll also gain experience points and city contribution points; you can upgrade your character levels and stats, a system that’s easy to use and makes sense with the game’s concept. Other customization includes adding accessories to your character. I was a tad disappointed that your costume can only be made up of other hero’s costumes which kind of defeats the point. To make up for that, you can also customize your room. Unlock places and you can get furniture and accessories for your room. 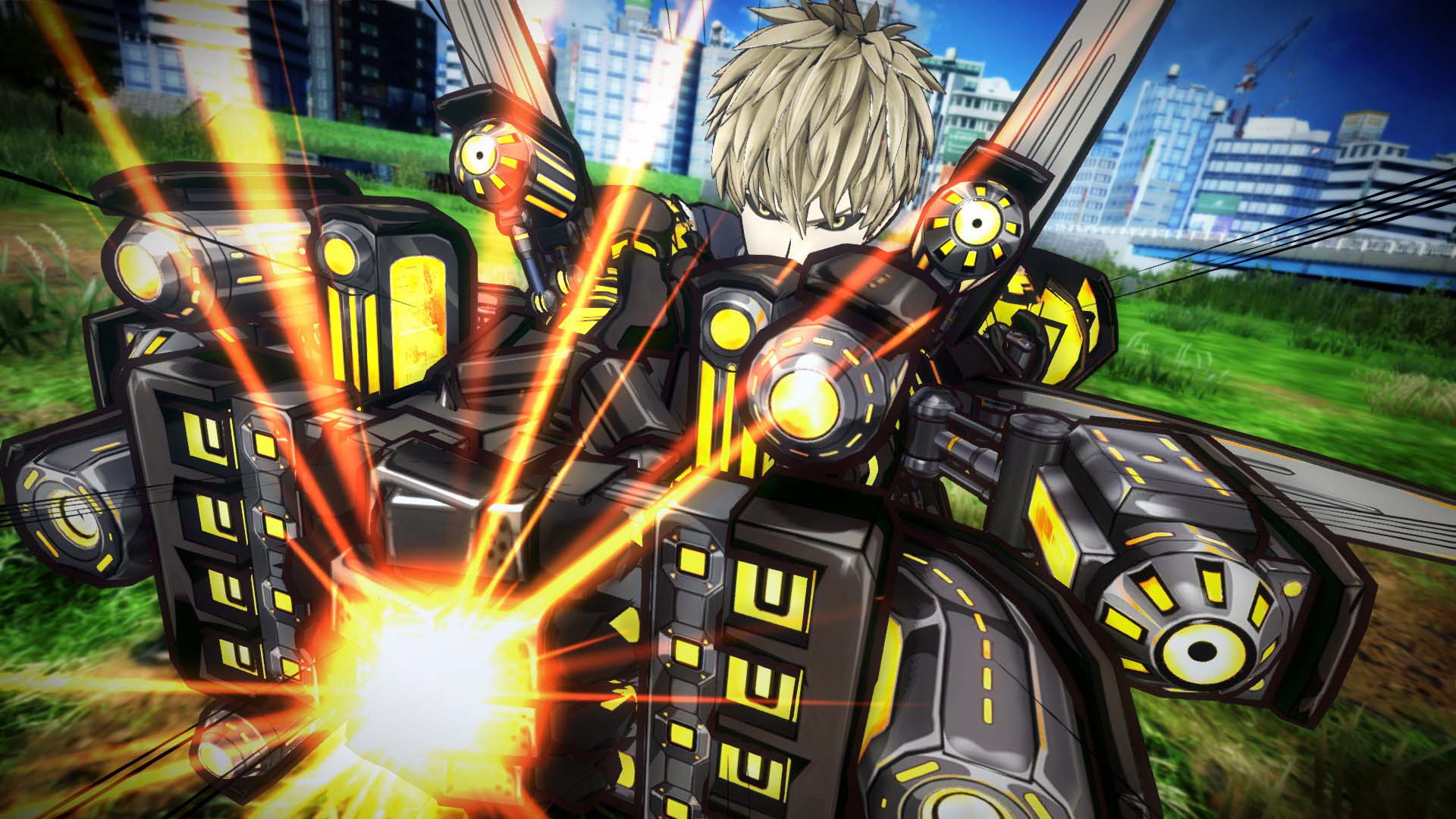 One Punch Man: A Hero Nobody Knows isn’t your average blockbuster title, but it’s fun to play. It also has some ridiculously funny moments, from depressed Saitama to Flirty monsters it captures the true One Punch Man essence, which I enjoyed seeing. Are you curious when One Punch Man season 3 will release? You should stay updated with the news!

It’s just too bad the game isn’t as polished as I expected it to be as if given more time to rid of all these small inconsistencies it had, the game would be an even more fun experience. Nevertheless, for all fans of One Punch Man, I genuinely recommend this. Well, it does help that this is the best one in the market so far.

Have you played One Punch Man: A Hero Nobody Knows? Are you a fan of the anime? Let us know your thoughts in the comments section below.

One Punch Man: A Hero Nobody Knows

One Punch Man: A Hero Nobody Knows isn’t your average blockbuster title, but it’s fun to play. For all fans of One Punch Man, I genuinely recommend this.

One Punch Man: A Hero Nobody Knows DEALS