It’s time to kick some grass! 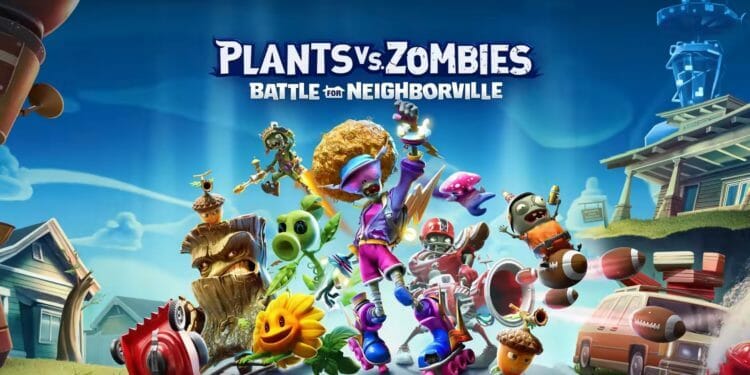 It’s time again to plant your green friends and dig out your zombies. The new Plants vs. Zombies: Battle for Neighborville is here. However, it is a new entry of the Garden Warfare series, not the retro strategy game that we all love. For those unfamiliar with the series, Plants vs. Zombies: Garden Warfare is a cartoony, over the top shooter, with open-world elements.

This series has a special place in my heart because Plants vs. Zombies: Garden Warfare 2 is one of my favorite third-person shooters. It brought incredible energy and hectic battles, combined with beautiful settings and wonderfully designed characters. Apart from PvP, there was also a lot to do in the form of world exploration and co-op survival missions.

I came to the conclusion that Plants vs. Zombies was a worthy addition to my list of favorite series. Plants vs. Zombies: Battle for Neighborville seems to want to do everything that worked in the past even bigger. Does this always work? Get your green thumbs ready for some zombie control, here is my review! 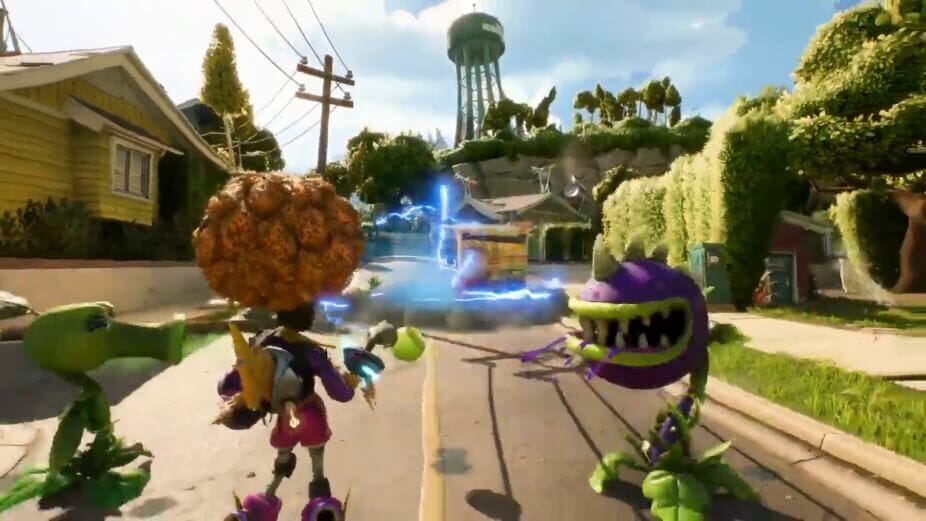 GROWING AMBITIONS IN PLANTS VS. ZOMBIES

Let’s start from the beginning. You can split Plants vs. Zombies: Battle for Neighborville into three sections. We start with the single-player. The single-player is bigger than ever because you don’t get stuck in one world. While the iconic (but repetitive) soundtrack is playing, you go to different locations to perform missions there.

Both the plants and the zombies have received unique worlds available to them. In terms of environments, these worlds look neat.

Every world is well designed and provides a fresh look. These worlds are filled with life, side quests and NPCs that you can get started with. However, the structure for every world is the same. You arrive, you are introduced to the other characters and you solve a problem for them.

Every time there are three missions, where you fight against a mini-boss at the end. I can tell you that you will realize this formula at some point and then it will start to sting a bit. These missions can be quite lengthy, especially if they eventually let you do the same, but with one or two twists attached.

I must say that it is worth continuing. At the end of those three missions, you will have the opportunity to open the Boss Gate. This is where the single-player from Plants vs. Zombies: Battle for Neighborville is at its best. These fights against the final boss are great. They throw the player every time in a totally unique scenario and they are all big and epic in scale.

The player is expected to play according to the rules of the final boss, which ensures a refreshing battle. Furthermore, the worlds are filled with chests, collectibles and gnome puzzles. The last few puzzles, in particular, are entertaining to play through, especially when the reward is quite valuable afterward. However, these puzzles are unclear and you will have to work hard if you want to complete them. 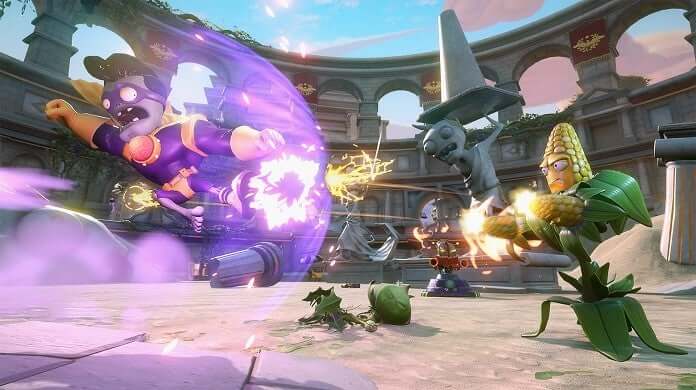 CHAOS AS A LEADER IN PLANTS VS. ZOMBIES

What a large part of the people naturally come for is the PvP. Or in this case the PvZ. Plants vs. Zombies: Battle for Neighborville has a close eye on what worked and brings back top favorite modes such as Turf Takeover, Team Vanquish, and mixed events.

The class-based combat works especially well in Turf Takeover because there are various choke points where different characters are good. Do you want to use a tank with a lot of health? Go ahead! Or do you prefer a fast but efficient healer? Every role can be fulfilled.

Turf Takeover is without a doubt a strong addition to the game. Thanks to the large number of players, it is completely chaotic, which creates a brilliant PvP experience at times. This year they also added a new game mode called Battle Arena. This new mode gives a new look at the combat in Plants vs. Zombies: Battle for Neighborville.

The mode is played with four plants against four zombies. The team that wins the first four rounds is the winner. Each round you have one life and you can only use each class once per game. Fast and lively, this game mode offers players a Plants vs. Zombies experience you’ve never encountered before in the series.

The PvP has indeed changed this year. Like I said before, the previous games were great fun, but there is no mention of balance. Unfortunately, this trend is continued in Plants vs. Zombies: Battle for Neighborville. Despite the fact that they have taken variations from the game, it has not improved much in terms of balance.

While the class variations did cause a lot of replayability, these are unfortunately absent this year. It is far from unplayable, but it will irritate you, I guarantee it. Chaos is preferred over balance, and that does not always work. 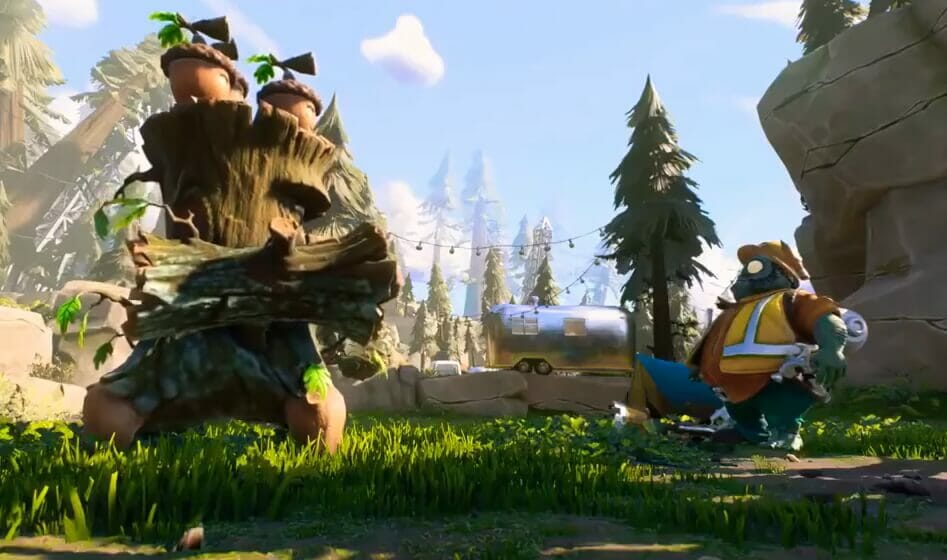 BRAIN FOOD IN PLANTS VS. ZOMBIES

Despite the balance problems, Plants vs. Zombies: Battle for Neighborville is still strong in its PvP aspect. What seems to have been cut, however, is the co-op PvE survival mode called Graveyard and Garden Ops. In this mode, you fight alone or with up to three other players by your side, against different waves of enemies. You protect your territory during these waves.

Normally you could certainly stay busy with this mode for a while. Unfortunately, Ops has been shortened to just five waves, and no wave is really challenging. It is a loss and a step back to the earlier versions of the survival mode. There is still fun to experience, but unfortunately, it is no longer as good as it used to be.

The experiences in both PvP and PvE modes are supported by the good work in character design. Each character has its advantages and disadvantages, but they all share the characteristic that they are all entertaining to play with. The characters, new and old, are all easy to recognize and look very good.

Each character can be completely adjusted to the wishes of the player. So you have a lot of cosmetic items, with which you can give each class a different look. These cosmetic items can be earned in different ways.

There is an RNG system where you can buy random stuff for thirty thousand coins, but you can also earn garments by completing challenges or side missions. And perhaps the biggest surprise of this year: the game has no micro-transactions! Thanks, EA, I appreciate it. Let’s hope they stay away and will not be added later. Because the system now is fair and satisfying. 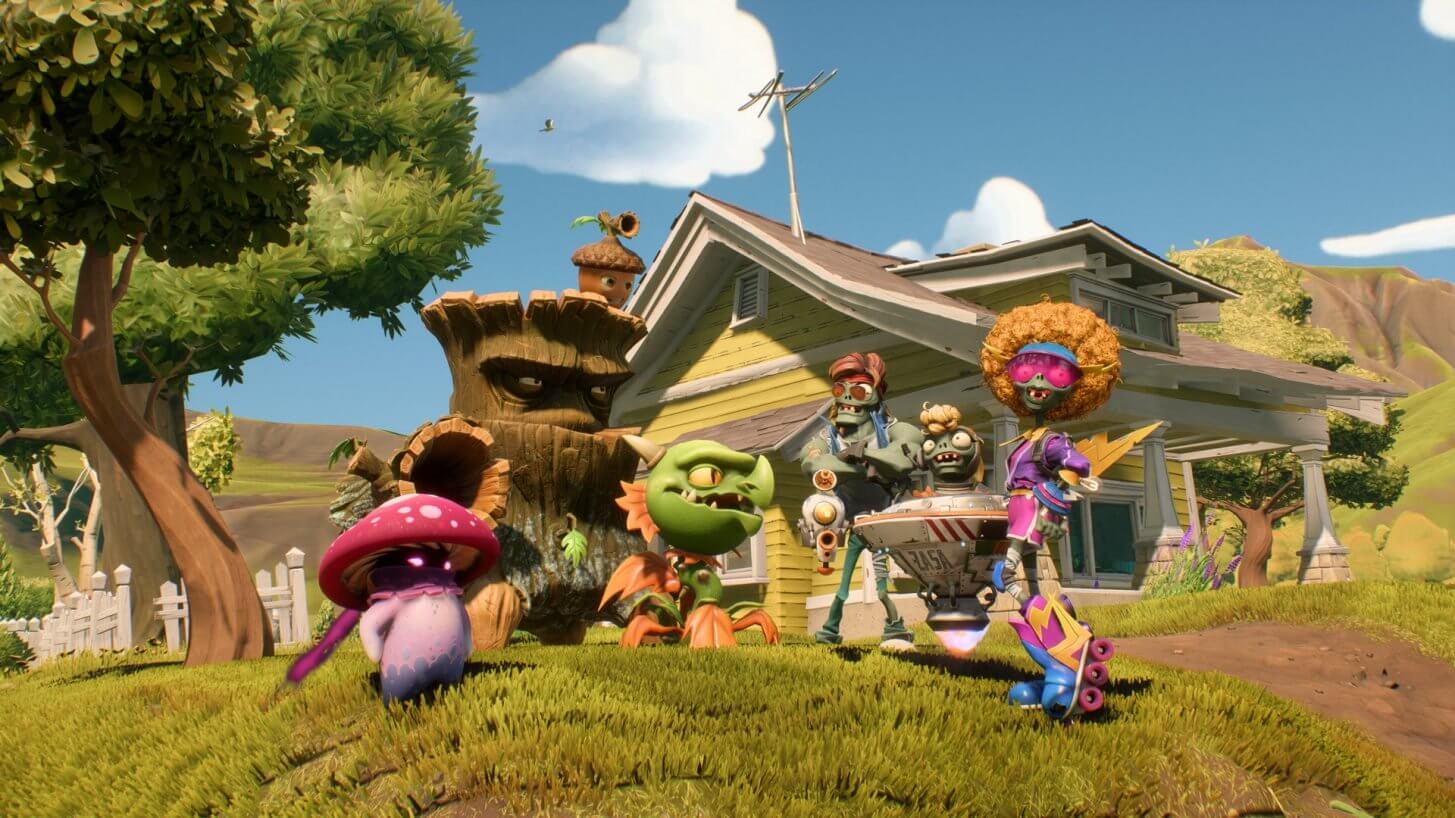 Conclusion: A Great Successor for Plants Vs. Zombies

Plants vs. Zombies: Battle for Neighborville is definitely a worthy successor to the popular third-person shooter saga. It does what it does best; it provides the player with an arsenal of crazy characters and skills that go hand in hand with the chaotic battlefields!

Plants vs. Zombies: Battle for Neighborville

EA Games and EA Access are Coming to Steam