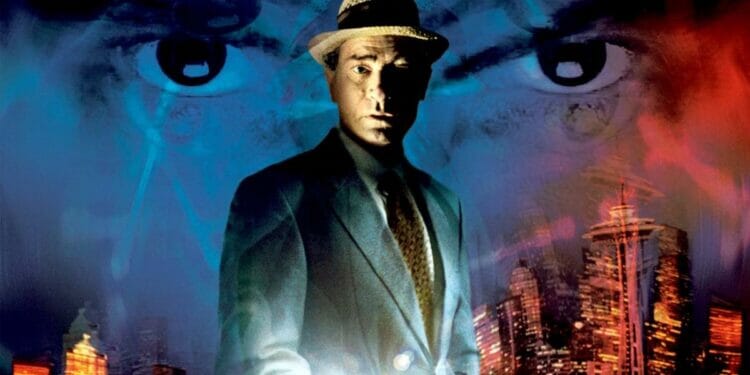 Unsuspecting television viewers found themselves in the world of Carl Kolchak once again a year after the 1972 television special The Night Stalker. Darren McGavin reprises his role as Carl Kolchak in The Night Strangler. This television special was penned again by Richard Matheson and aired on ABC one January. Simon Oakland returns as Tony Vincenzo, the loud mouthed newspaper editor who always seems to be intertwined with Kolchak’s crazy stories. These two are joined by series newcomer Jo Ann Pflug who plays Louise Harper, a young college co-ed who joins Kolchak’s chase for a sensational story.

A down on his luck Carl Kolchak, retelling his tale of the vampires in Las Vegas, accidentally runs into Tony Vincenzo at a bar in Seattle. Kolchak begins to smooth talk his way back into the newsprint biz and Vincenzo finally caves and allows him a spot at the paper. A simple murder story suddenly turns into another publication nightmare for Vincenzo as Kolchak begins to uncover more and more unnerving secrets about the victims.

Researching the victims Kolchak runs into college co-ed  Louise Harper at a belly dancing establishment where one of the victims use to work. Intrigued by the press and what Kolchak was attempting she becomes his sidekick in this investigation. Once again this story has amazing twists and turns that I will not ruin in this article. I would have been upset had someone told me who the killer was, where they were and how all of this was resolved. Let’s just say that Matheson’s perfect writing saw this story to an amazing conclusion.

Darren McGavin has always stolen the show in anything that I’ve seen him in, whether it was A Christmas Story, The Delinquent Delinquent or Billy Madison, McGavin was always on the top of his game. McGavin was born to play this role, a snide, somewhat self-deprecating, realist of a reporter. As you watch the performance you just know that Kolchak knows more than he’s letting on. If the show was on today, most of society would call him a conspiracy theorist, but Kolchak was always right. His hunches and view of the world always lead him on the straight and narrow. McGavin does steal every scene in this movie, but that’s not to say that Oakland was going to let him get away with it.

When my Dad and I would watch these, he would always wonder how Oakland never had a heart attack while filming. This poor man let’s Kolchak get so far under his skin he always looks like he’s about to blow his top! The two of these men arguing in the office is always pure television gold, nothing you would ever see on the tripe they air now.

It saddens me that sometimes that people will pass up on a great movie or television show just because they look dated. The Night Strangler looks dated, I won’t lie, it is an early 1970’s made for television horror movie. The television company wasn’t throwing money at the thing. The movie was made on a low budget and had to make do with what they had.

That being said the director did a great job with the main set pieces, the finale of the movie take place in an amazing atmospheric historical area of Seattle. I can’t tell you where, but you’ll be just as surprised as I was when it was revealed. I’m a huge fan of the 70’s, I love disco, I love the wild fashion and of course Star Wars debuted in the 70’s. I don’t know why I’m obsessed with that decade, but I am and I love it! Seeing Seattle in the 70’s is a nice site to see, I’ve never been there, probably won’t ever make it there, but now I know how it was fifty years ago.

The Night Strangler and the The Night Stalker both mesh horror and comedy so perfectly that it is rarely duplicated nowadays. Hollywood and its actors could not pull off this type of magic, you rarely see magic anymore on the big screen. That’s one of the big reasons I like to watch older movies more and more. I don’t know when the magic died in Hollywood or where all their creative ideas went, but in the 60’s and 70’s they were on fire. These two Kolchak made for TV movies can stand up against most horror movies coming out today, and they are better acted and better written.

If you’re a horror fan and are looking for something new to wet your whistle with I high suggest these two movies and the television show that followed. You will not regret it and you’ll love ever hour with Carl Kolchak’s crazy life.

In his second television special Carl Kolchak has found residence in Seattle with another paranormal tale to uncover.

Mobile Game Development: Why You Should Build It On The Blockchain