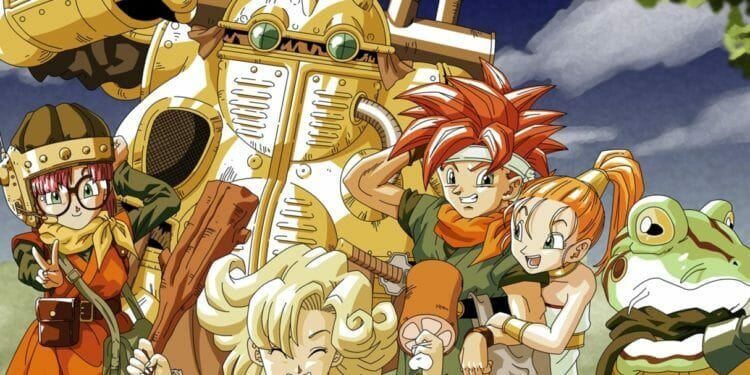 Now I have always been a huge fan of JRPG’s I’ve just never been very successful at them. I usually buy them, enjoy the opening cut scenes, get through the tutorial and then get utterly obliterated by the first boss. Since we’ve all been on lockdown I’ve been able to seriously start knocking games off my Pile Of Shame. Chrono Cross is one of the biggest titles that I missed during the Super Nintendo era. I didn’t know much about games when I was thirteen and my parents knew even less. They usually bought me games the store person told them to buy, which actually left me with a nice collection. JRPG’s weren’t really recommended, so my collection does lack those.

I have loved Squaresoft and Square Enix games ever since I fired up Parasite Eve during the PlayStation era. When I was finally making my own money I began to pick up anything with Squaresoft or Square Enix on the box. This was very fortunate because some of their older SNES games and remakes or ports on the DS and PSP began to get pricey very recently. I snagged Chrono Trigger for the DS probably ten years ago and I’ve finally popped my first boss cherry. In fact at the time of writing this, I’ve beaten all the bosses I’ve encountered and am currently on optional end game quests before fighting the last boss, Lavos.

You play as a young man aptly named Chrono who’s day turned out very different than what he had planned. He wakes up late in the day to his Mother shaking him because he was going to be late to the fair. He gets up, meets a young girl Marle and they enjoy the fair until they meet up with Chrono’s friend Lucca. Lucca is super smart and she and her father have built a teleporter, when Marle tries the machine her pendant messes with the system and sends her back in time. Chrono goes to save her and so begins a huge quest that takes Chrono, Lucca, Marle and a handful of other characters all through time.

The cast of characters are a fun bunch. You get people from all walks of life, time and status! They’re all unique, have sweet traits and react to the “cut scenes” in the game with specific dialogue. Seeing as the original of this game came out on the SNES, that was pretty unique for the time. Each character also has a unique move set, magic and special move which can be upgraded as you fight through time. You can also gain Dual and Triple Tech moves that use certain characters together to really lay waste to your foe.

The battle system is pretty standard, it is turn based and you control all three of your characters on the battlefield. I’m pretty bad a turn based RPG’s, they have never been my forte and I always seem to give up early in the game. This time, since Chrono Trigger is such an important game, I decided to stick with it and grind when I usually wouldn’t. My levels slowly rose and so did my ease with the game. I did have to hit some walkthroughs to figure out some of the weirder parts of the game, but other than that it was pretty smooth sailing once I hit the higher levels and had the higher equipment.

Controls are pretty basic for the title, you use the D-pad to move, if you’re feeling saucy you can use a stylus and move your team on the bottom screen. I didn’t enjoy that in the DS Legend of Zelda titles so I definitely used the D-pad. The DS has a new battle system that lets you use the stylus to battle or the buttons, I chose stylus because sometimes you have to be super fast pulling off your moves or you may be at a significant disadvantage. You tap on the character and then chose between attack, magic or special move.

You can also tap on items should you need to revive a fallen character and the like. This game can get pretty difficult at times and knowing which character to have at the right time can be crucial. You learn this from trial and error, just make sure you save often so you don’t have to backtrack far.

This is a lengthy game, I’m about twenty hours in and now have to accomplish special side missions for all my party members. I attempted the final boss and he took me out in one shot before I could even do anything. That’s the magic of this game, after a certain point you can fight the final boss at any time, you probably won’t succeed, but it is an option. Once all is said and done I’ll probably drop thirty hours into the title so that I can see the end credits. The only real reason I had time to do with was due to the lockdown, I sat at my computer with YouTube running and played Chrono Trigger for a substantial amount of time. When Animal Crossing arrived for the Switch it cut into Chrono Trigger playing time, I need to get back to it and save all the times from Lavos.

This is one of the best JRPG’s to have ever graced our shores, I know I suck at them and haven’t beaten many but I’ve researched a lot and have played many. I’m disappointed in myself for not knowing to play it sooner, but when you are young you’re not too bright. For any fans of JRPG’s or super early Squaresoft games, I would suggest this game. If you can find a cheap copy of the SNES version that would be the coolest way to play, but the best version is the one that I stumbled upon one day, the Nintendo DS version.

That’s the one you should look for if you decide to jump in. DO NOT get the Final Fantasy Chronicles one, the load times are terrible in-between screens, plus you don’t get to walk and play! This is a must-play and before this quarantine ends I will beat Chrono Trigger and wipe it off my Pile Of Shame!

An old JRPG that passed me up during the Super Nintendo days, now that we're on quarantine I'm going through all my missed games, today it is Chrono Cross and it makes me glad we're on Lockdown.