The start of a second legacy

Mega Man. A household name in sidescrolling between the 1980s and 90s. Mega Man has had a storied history of games, with most of them being classics, such as Mega Man 2, for example. He went from an action-platforming hero to one of Capcom’s most well-known characters.

Then, in 1994, the Super Nintendo was given its own Mega Man series, in the form of Mega Man X. Mega Man X would go on to be a well-known title and universally well-received in its original release, spawning several sequels. Starting today, we’ll be paying tribute to the series and reviewing all of the Mega Man X games, starting with the first game in the series.

(Author’s note: for ease of access purposes, each game reviewed is the version(s) present in the Mega Man X Legacy Collection 1 and 2 games.) The Plot of Mega Man X

Taking place 100 years after the events of the original series, Mega Man X takes place in a world where humans and advanced robots capable of thinking, feeling, and making their own decisions coexisted. These robots, known as Reploids, were based upon a creation of Dr. Light’s, before the time skip.

X (the titular/playable character), was buried deep underground for 100 years, and was discovered by Dr. Cain. Ignoring the warnings Dr. Light left in the capsule, he unearthed X and used his data to create a legion of robots (the Reploids, as stated above).

Before long, a mysterious virus began infecting Reploids and causing them to turn against the humans. Infected Reploids were dubbed as Mavericks, and a team known as the Maverick Hunters would be formed, to combat these Mavericks. It’s here where the player first takes control of X, in the middle of one such mission. 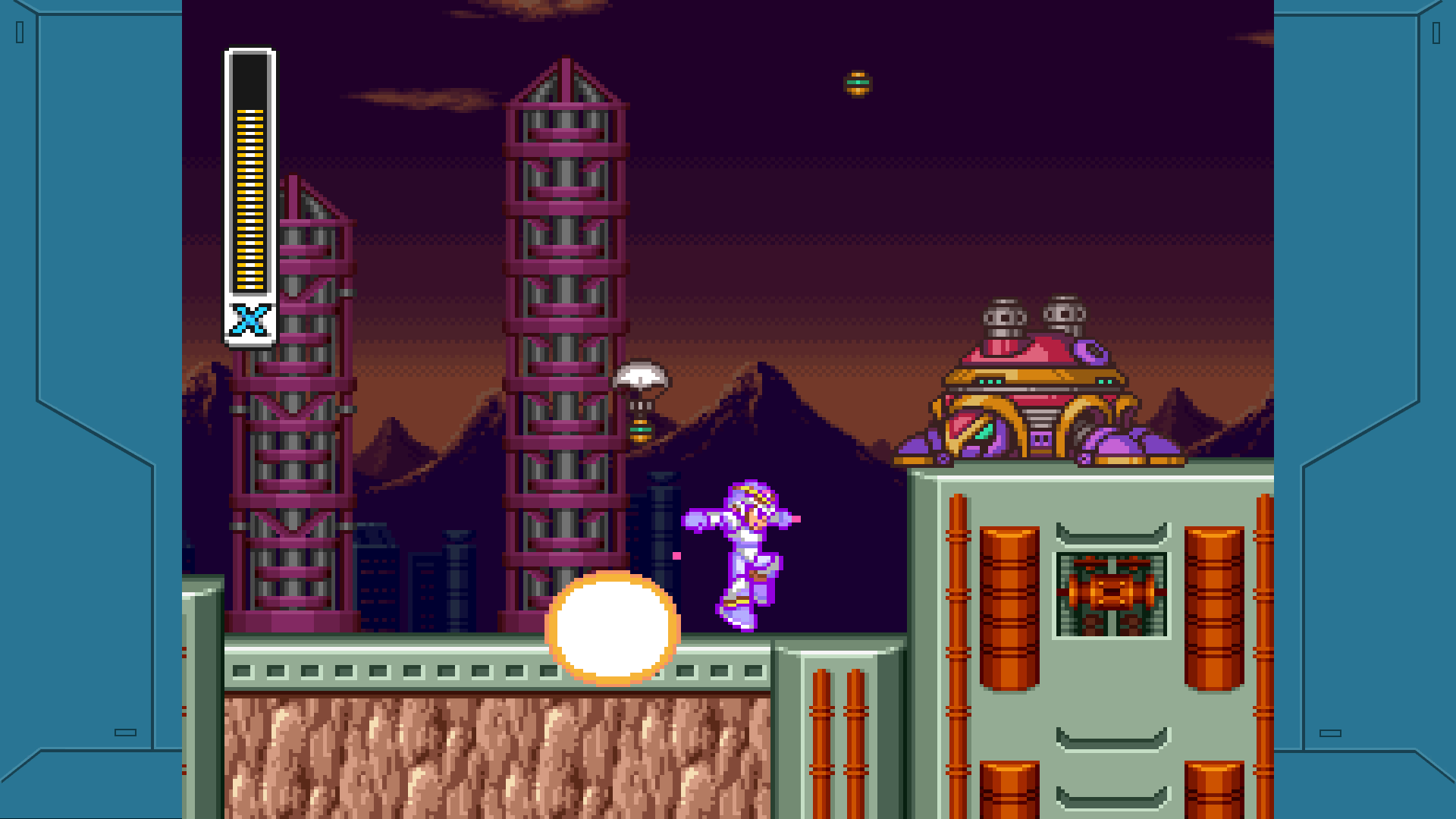 Mega Man X controls extremely tightly and fluidly as a platforming game and side-scrolling action title. All of the controls and platforming feel incredibly responsive, and tapping the buttons allow you to nudge slightly and jump lower. Holding the button allows you to jump higher, and holding the D-pad allows you to run around, as to be expected.

Charge shots return from previous Mega Man titles, and holding it will power up the Mega Buster, up to two more charge levels. As well as charge shots, a brand new mechanic was added; wall kicking. You can wall kick from almost any wall in the game, allowing the player to quickly scale any wall they so desire.

After the opening stage, the player is rescued by Zero and sent to the Level Select screen. Here, they are allowed to choose between any of the eight stages and clear them in any order they desire. It’s strongly advised that you go and complete Chill Penguin’s stage first, and for good reason. More on that later.

A Timeless Appearance and Soundtrack

The gameplay, aside from very tight controls, looks stellar for a 1994 game. All of the sprites seen in this Mega Man X review animate well with no jitters (aside from the Super Nintendo’s usual slowdowns when the game gets too busy). The stages, while short, also all look beautiful and present their own challenges to the player, changing up the gameplay and making it feel not as linear.

The soundtrack is absolutely amazing. Most of the themes in the game, you could listen to and not be bothered after repeated listening. A lot of the music also feels like they fit with the stages they’re cast in, adding to the charm of the individual stages.

A couple of personal favorites of mine are those of Armored Armadillo, Spark Mandrill, and the second part of the last stage. 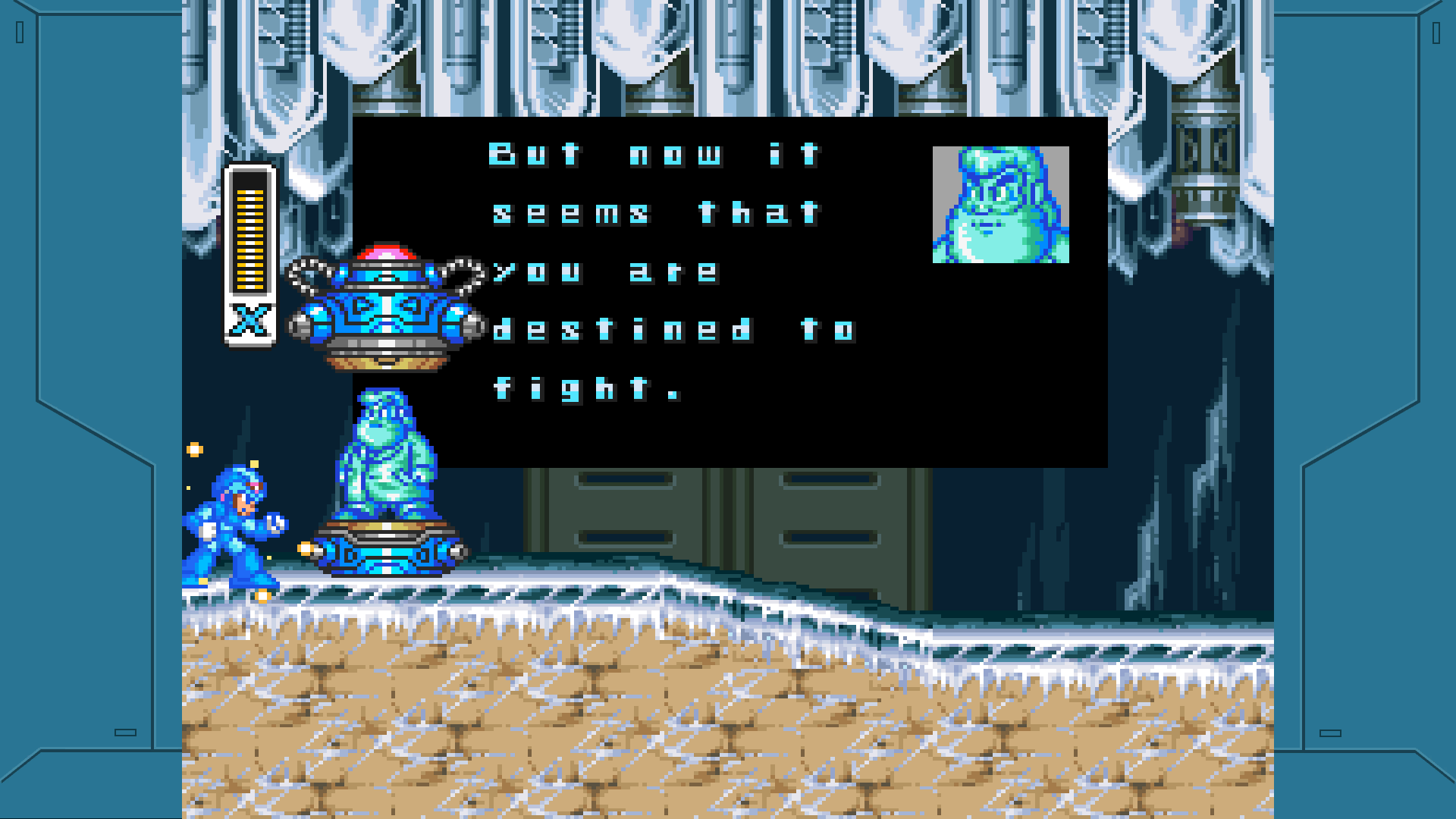 The Upgrades System and Pickups

Halfway through Chill Penguin’s level, you’ll find a tall blue capsule. Inside is a projection of Dr. Light, who explains that there are three other capsules like that one and gives a brief explanation of what the capsule will give. Stepping inside will give players the Legs upgrade, which allows X to dash farther and jump higher and further. He’ll need it for certain stages in the future.

The other three upgrades take some work to get to, and all require the Legs upgrade. The helmet upgrade, in Storm Eagle’s stage, allows you to destroy some blocks by jumping into them. This is useful for finding some pickups and for attempting to get an upgrade later.

The chest upgrade is quite possibly the most important upgrade to get. In Sting Chameleon’s stage, you scale a wall and find a sub-boss inside a hidden room. Defeat it and Dr. Light rewards you with an armor piece that reduces all incoming damage by 50%. Very useful and worth the potentially long sub-boss fight if you’re planning to get all the armor, and it increases X’s survivability a lot.

The hardest upgrade to get before the end of the game is in Flame Mammoth’s stage. After dropping down a pit to progress, you’ll find some overhead destructible blocks, out of reach. To get there, you have to make a dash jump over to the blocks, leaving a ledge at a pixel-perfect distance. Upon getting there, you have to mash the jump button to break the blocks overhead and not fall.

The Buster upgrade in this section gives the Mega Buster a third charge level, making it even more powerful. In addition, it also allows X to charge the sub-weapons of bosses he’s defeated, adding more powerful effects (while using more ammo, of course).

Succeeding this difficult jump will allow you to get the Buster upgrade. Failing will make X fall back to the main stage, and players will have to kill themselves if they wish to try again. During the Mega Man X review playthrough, I was unable to land the pixel-perfect jump after several attempts.

However, if you get to the last group of stages, Zero will give you the Buster upgrade, but only if you haven’t retrieved it in Flame Mammoth’s stage. 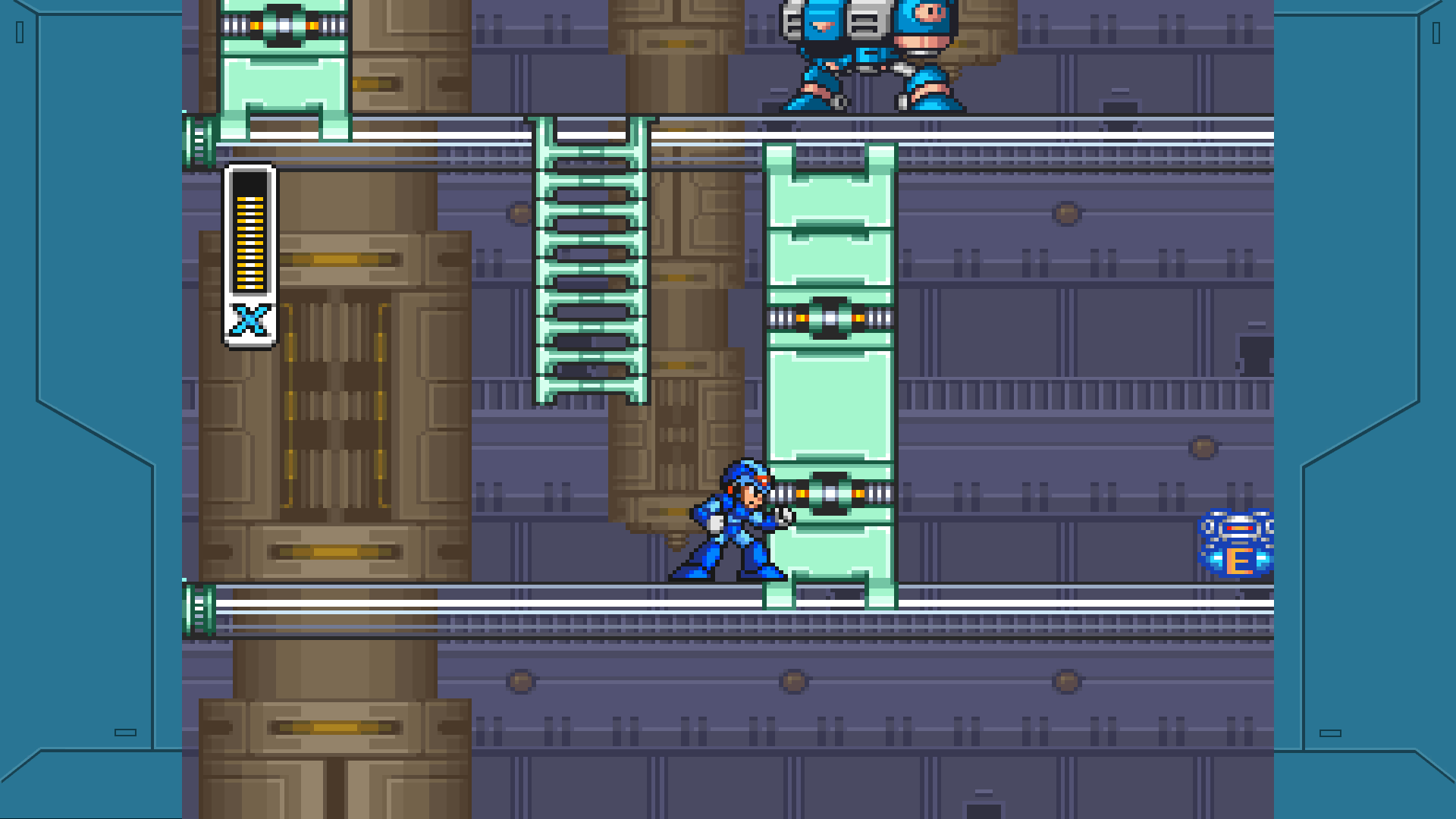 The Heart Tanks and Sub-Tanks

Another critically important upgrade that can be found in every stage is the Heart Tank. They each increase X’s health pool and heal him a bit for every Tank he picks up. Finding all eight will effectively double his maximum health, and combined with the chest armor upgrade, will make X survive a lot longer.

The Sub-Tanks are another very useful utility in their own right (pictured above, to the far right). Finding one of these four refillable tanks will allow the player to collect health pickups even when their health is full. When they do this, a sound cue is heard and the pickup is transferred to the Sub-Tank, effectively giving X on-the-fly healing in hard boss fights.

Going out of your way to obtain these collectibles is very powerful, and while they may take some time to collect, they will make later stages a bit easier and more bearable. 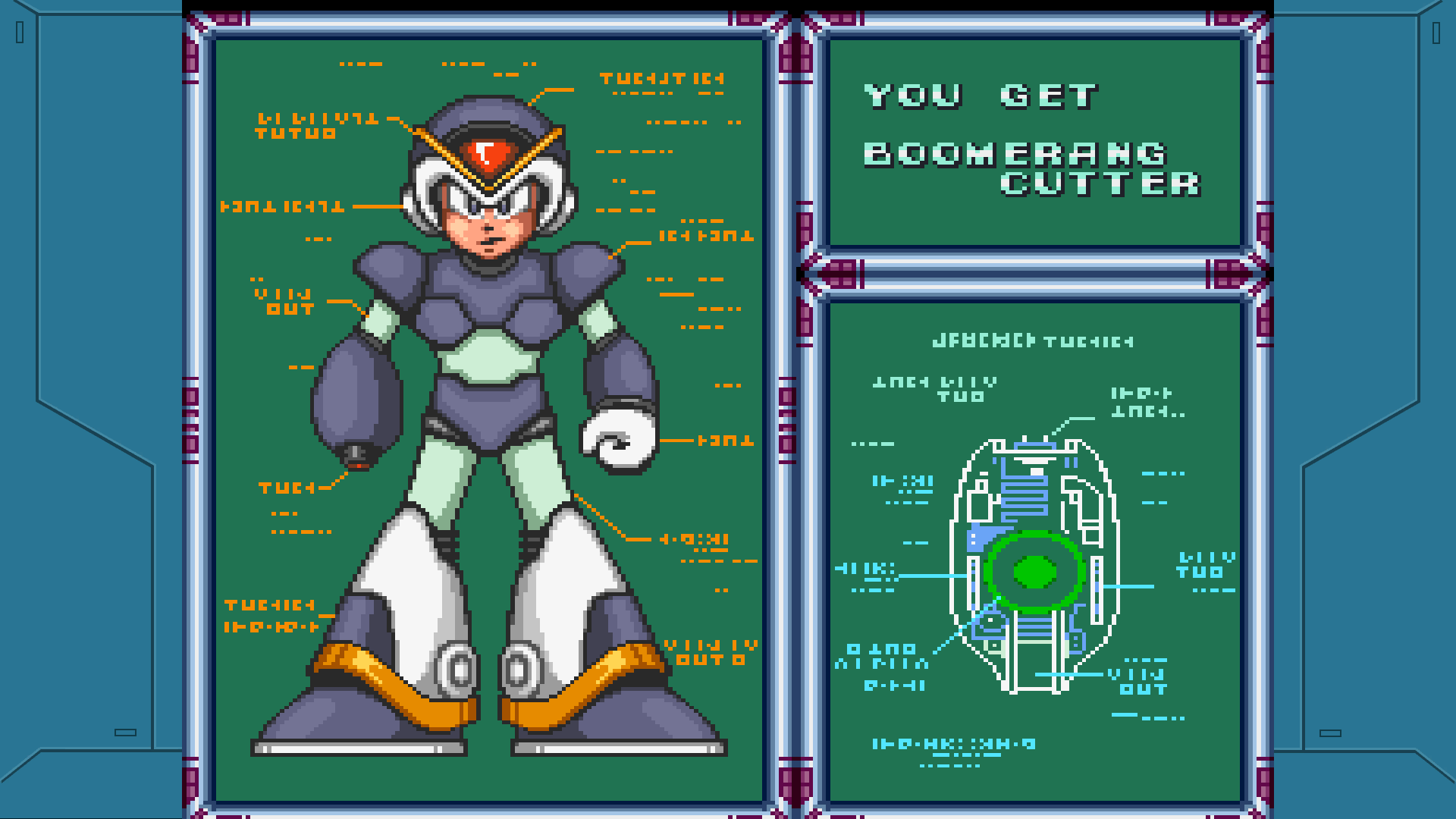 Boss battles follow a similar format to those of older Mega Man titles; deplete the boss’s health to zero to defeat them, and get a brand-new sub-weapon. Each of the eight weapons has its own unique use for both combat and traversal. For instance, the Boomerang Cutter (given from Boomer Kuwanger, seen above) allows players to throw a boomerang to get otherwise inaccessible items.

Each Boss has its own weakness, so fighting with sub-weapons is a viable strategy. Each fight is wholly unique, and it makes the stages all have their own unique flair. 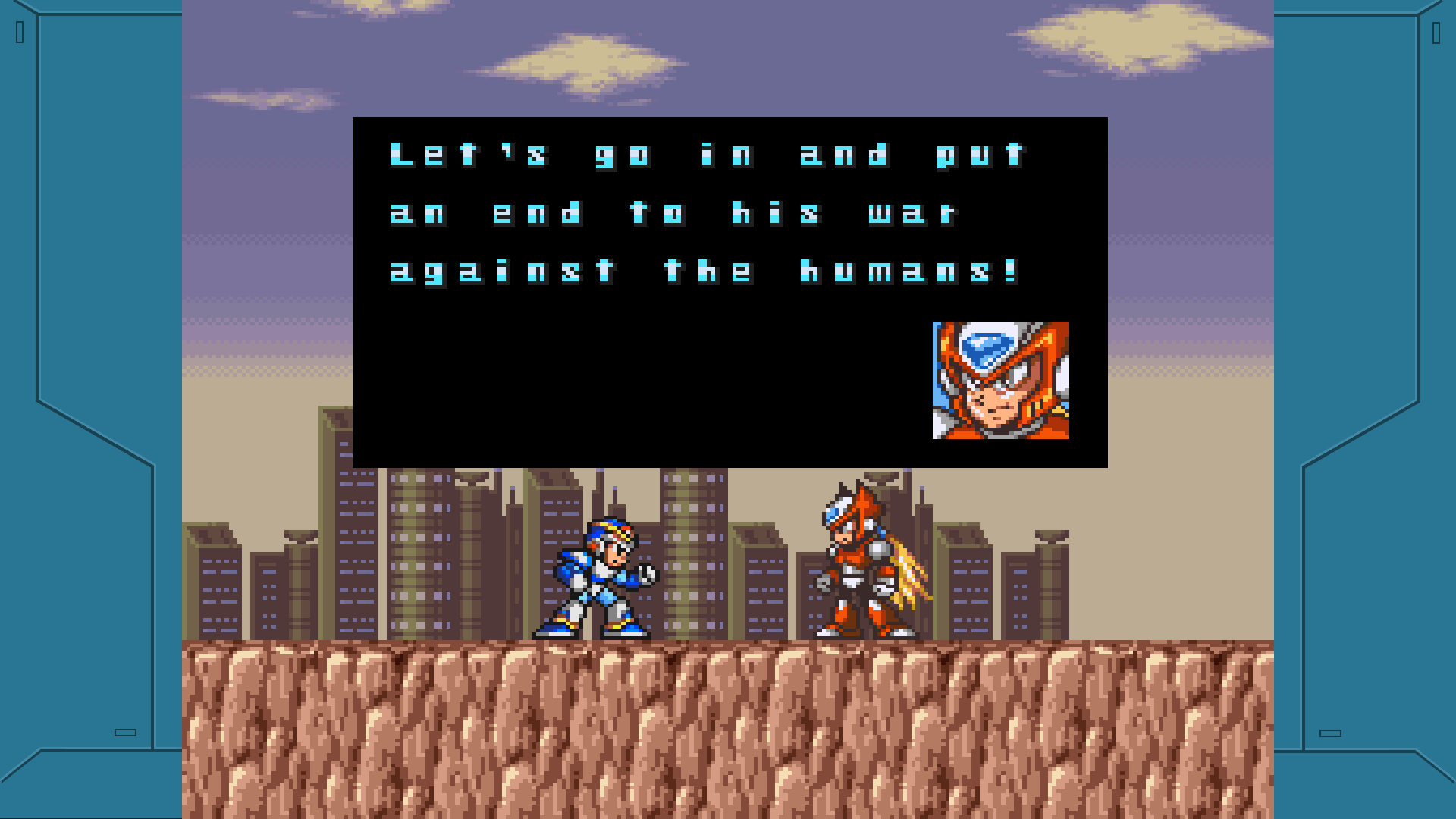 Sigma’s Fortress is a portion of the game that deserves its own section. After completing the eight main stages, a ninth stage will open, with Sigma’s symbol representing the stage icon. Upon arriving, the player is faced with difficult platforming areas and tight rooms to navigate, crawling with enemies, all while trying not to take too much damage.

Proceeding far enough into the stage, you’ll find Vile (whom Zero rescued you from at the end of the first stage). After taking a hit from a paralyzing blast, Zero sacrifices himself to weaken Vile, and you fight and destroy Vile. After defeating him, Zero gives you the Buster upgrade (if not picked up previously), and disappears. 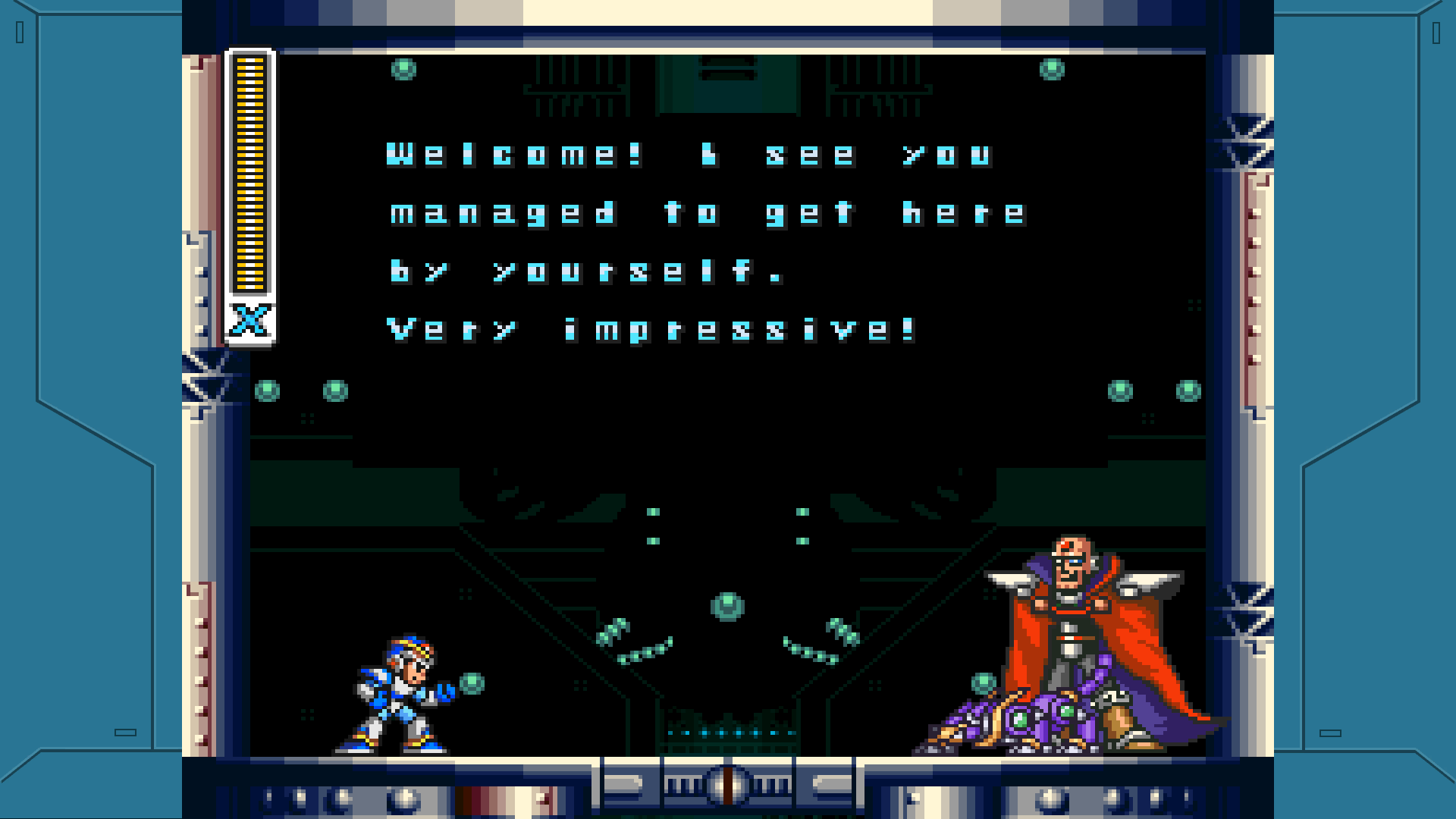 Moving forward, you begin to fight the eight robot masters again, spread out across this and two more stages. Here, you can just as easily use the sub-weapons you used to defeat them the first time around. At the end of each of these three extra stages, is a unique boss, that all have their own weakness, but are significantly harder than the robot masters.

Completing the three preceding stages will take you to a fourth and final stage, where you fight Sigma and his pet Velguarder (a wolf-like Reploid, both seen above). You first fight and destroy Velguarder, and then Sigma throws his cape off to fight you. He’s a very difficult fight, but if you use the sub-tanks (which the game generously allows you to refill before this section), he shouldn’t be harder than taking a few attempts. 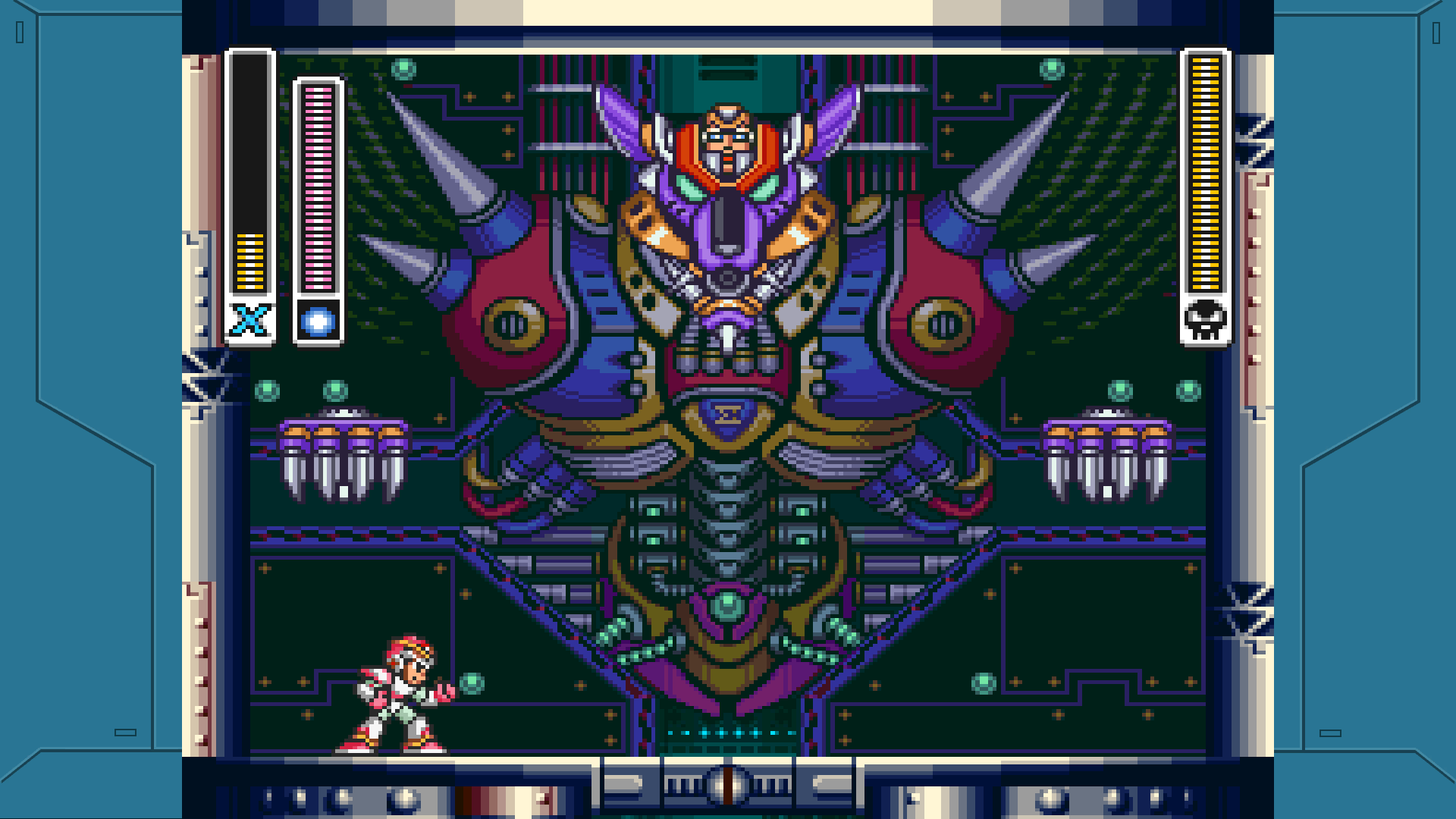 Defeating them both will cause Sigma to fuse with Velguarder, creating Sigma 2. This boss fight involves jumping on Sigma’s hands to reach his face and then pelting it with sub-weapons and the Mega Buster. Drain the health of this last form, and congratulations, you’ve saved the world and beaten Mega Man X.

Mega Man X is an absolute blast to play through and has the type of visual appeal that makes it so welcoming to come back to. Its responsive controls, short but tough levels, and varied boss battles make the experience something special.

Combine all of those with an amazing soundtrack, fun and powerful sub-weapons, and a difficult but fulfilling finale, and you have a timeless classic that anyone could play. Beit through the original hardware, a Super NES Classic, or the Mega Man X Legacy Collection, I fully believe that this game is a must-play for any Mega Man fan, and serves as a fun introductory title to the series, if not a bit difficult.

Next time, we’ll be taking a look at its sequel, Mega Man X2. Is it a worthy successor to the great experience that Mega Man X has provided? Only time will tell.

Mega Man X is playable in the Mega Man X Legacy Collection, available on PlayStation 4, Xbox One, Nintendo Switch, and PC via Steam. You can also play this game via the Super NES Classic, which you can learn more about here.

What did you think of our classic Mega Man X review? Did you like it? Do you like its design and gameplay? Let us know your thoughts in the comments section below.

If you like classic video games, you can read our review on Chrono Trigger here.

Mega Man X is an amazing side-scrolling title and is pretty close to perfection, bar the rather difficult endgame levels.