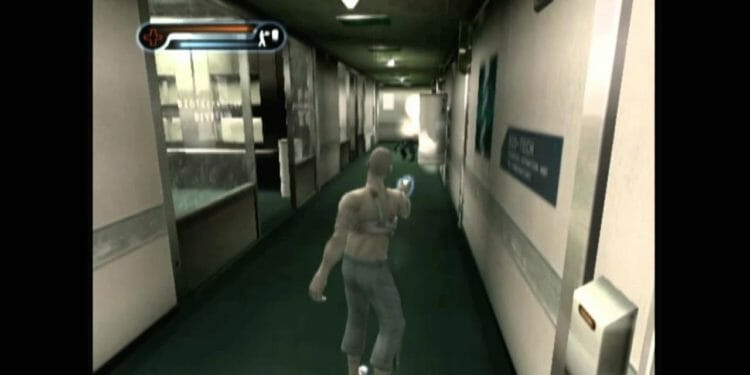 There was once a time when Free Radical Design was king of the first-person shooter. The early 2000’s were their stomping ground. Timesplitters 1 and 2 were occupying my time along with my friends and many other gamers. Then in 2004, they developed Second Sight, which was published by Codemasters for the GameCube, Windows, PlayStation 2 and the original Xbox. What I thought I was getting, judging by the box art, was Free Radical’s take on the survival horror genre. What I got was a game that was scary due to the fact that Free Radical had no idea how to implement stealth mechanics or levels. This game is truly scary to play, but not because it’s actually scary.

Valiant Attempt at a Good Story

I will say that I miss this era in gaming. This was the time when the graphics were good, but not yet perfected. The developers were just getting the hang of developing on these higher-end consoles. And writers were trying to flex their muscles by actually putting a compelling story in the game to carry you from level to level.

That is one of the better points of this title. You play as a standard level amnesiac that we’re all used to if we’ve played any JRPG. Waking up in a hospital that is as scary as it as drab, you have no idea who you are, where you are or why you are. You must piece your identity together as you unlock you mysterious new psychic powers. As you progress through the first two levels that act as tutorials for your powers and common weapons, you find out your name is John. You were a doctor and drafted to help the army with a project called Winter Ice. That’s where things go crazy for you, and you end up all screwed up with the powers of Professor X.

The controls of the game are dodgy at best. There are some good aspects to them, but with that good a lot of bad comes your way. The coolest part of the game is your psychic power. You start off with two simple powers: telekinesis and heal.

Let’s start with the psychic powers: D-pad lets you pick which ability you want, but keep in mind you cannot hold your gun and use a psychic power at the same time. I don’t know why, but it was clunky switching to and fro during combat. The ability to heal is the most useful one at this point because you are a magnet for the never-ending security in this hospital.

Your powers are not unlimited. They run out pretty quickly when you’re whipping things around or healing yourself. In the end, this leaves you very vulnerable. You’ll have to switch to melee when your powers or ammo run out, so get good at punching people.

Not Made for Stealth

Where this game turns ugly is when you have to be stealthy. You simply cannot run and gun it through a level in the hospital. You have to somehow find where to go with a map on your HUD. To even have a map you have to find it on a computer somewhere, then access it through the “select” button. You never know where you are in the room, you just know what room you are in.

The levels do not have enough areas to crouch around or hide in, or vents to sneak through for this stealth to be fun at all. At least in Metal Gear you had a great HUD and could see pretty well, all things considered. Free Radical threw that all out the window, along with having a fun stealth game. You can’t hide, can’t run and the enemies are endless. You could kill twenty of them and more will come until you run out of ammo and power, then you die. It is such an unfun process.

I was genuinely surprised at how good this game looked on the Xbox. It’s fifteen years old and it was actually pretty. This is the era I enjoyed the most. I don’t know why the imperfect graphics call to me and make me smile anytime I boot up one of this generation’s consoles, but I do. The in-game graphics are actually pretty darn good as well. While most of the areas are bland, the main character looks good as he’s running around shirtless throwing garbage cans at endless enemies. The main character looks good and is animated well, as are all the enemies that will kick your ass if you’re spotted. While you’re getting killed mercilessly, you’ll look pretty doing so.

Do not play this game, holy hell; I regret putting precious hours of my life into this title. I’m glad I got a second-hand copy for five dollars at my local used game store. If I had paid full price back in 2004, I would have been pissed!

If you want to play a Free Radical game, stick with the Timesplitters series, that was their best idea and best creation. Skip Haze, that game is pretty rough. Again, definitely skip Second Sight. If you want a game where you have Force-like powers, grab Psi-Ops or one of The Force Unleashed games. While those are pretty short games, they mastered the mechanics of psychic-like powers. Plus there is little to no stealth in them.

Just skip Second Sight. Do not play it, try something else. I hate to say that about any game. But man, this title was no fun. At least it was pretty to look at. I won’t be giving it a second look though.

Have you played Second Sight before? What did you think of it? Leave your thoughts in the comments below.

If you’re interested in a different subset of sci-fi games, check out our reviews for Crying Suns and Rebel Galaxy Outlaw.

Free Radical tried their hand in something that wasn't a first-person shooter, and it is truly terrifying, but not in a good way.