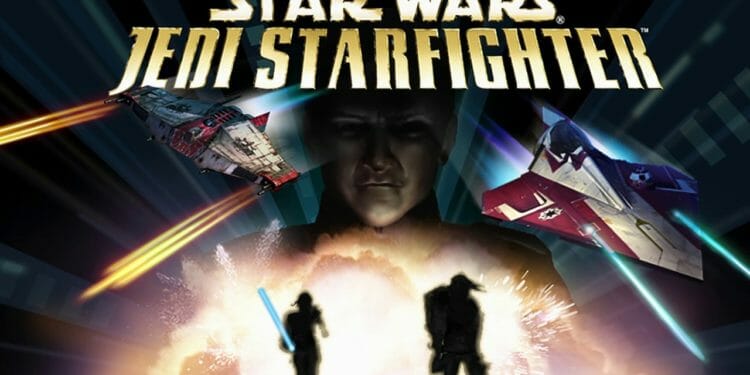 There was a time when Star Wars games came out more commonly and were actually enjoyable to play. This was before EA would ship an unfinished game or a game where there was a pay wall for everything. The turn of the century had just happened and LucasArts was cranking out Star Wars game to coincide with The Prequel Trilogy. Star Wars was everywhere at this time and it didn’t feel oversaturated or rushed; the games, toys and movies were there out of love. Yes, this was before Disney decided to hock everything Star Wars.

Now, I will admit that I own both of EA’s Battlefront titles, and the part of the first Battlefront that I enjoyed the most were the space battles. Somehow I excelled in that department and was blowing the Empire out of the sky with my teammates. What I failed to remember was that LucasArts has released a game based solely on those missions; that game was Star Wars Jedi Starfighter.

Here’s the caveat, I own this title for the PS2 and original Xbox, but I played it on the Xbox One. I’m figuring if this retro review piques your interest that’s where you’ll be able to play it the easiest. It does look better on the Xbox One and the load times are nearly non-existent. This happened when I played Star Wars: Knights of the Old Republic on the Xbox One, I couldn’t read the hints from Bioware the load times were so fast.

This story takes place before the Battle of Geonosis (which is the battle at the end of Attack of the Clones). You play as Adi Gallia trying to discover what type of weapon the Trade Federation is looking to create to use in the upcoming war. The game really isn’t too big on story, you’re told brief snippets during minor cut scenes. This really isn’t a huge deal to me seeing that most Star Wars games lacked heavily in story, but focused on fun and gameplay. Jedi Starfighter is the same, the mechanics are so great, you really don’t care why you’re flying around blowing up the Trade Federation.

One mechanic or idea in games that has always irritated me slightly is the mission to mission system. For some reason this mechanic pulls me out of the story and the game if there is an end screen to a mission. I get that this designates a finished level in the game, but it really distracts me, even more so now that I’ve been playing games with missions that don’t need to show me how I did in a static screen.

The controls are fun for a Star Wars flight simulator, A is fire, B is Force ability in the Starfighter or secondary weapon in other ships, X is zoom in on target and Y is target enemy ships in your site. Right Trigger is accelerate while Left Trigger is brake. The game doesn’t have the difficulty some of the flight sim games I’ve enjoyed in the past. I rarely had to use anything but fire, the only mechanic that would end my mission is if the mission was a timed one. Something else that was fairly common in games of those era.

The Force Ability makes the missions more fun, but once again you don’t need them. The game is simple and pretty easy, but all out fun! One thing I couldn’t stand or change was the fact that you HAVE to play with inverted controls. I have NEVER played with inverted controls and they were difficult for me to get accustom to. Even when I go back to play after a week or so, I’m lost with the controls; I’m thankful that current games allow us to pick our control set up.

For a 2002 game I was impressed with the graphics, yes they were a bit upscaled by my Xbox One, but for some other games of that era it wasn’t cringe worthy. It is difficult going from this game to Star Wars Jedi: Fallen Order, but Respawn did a great job with the graphics of this game. I loved seeing all the prequel ships in the older graphics, made me really miss that era in gaming. Yes, I’m the guy who plays the Halo 2 remake and flips it back to the classic graphics because those warm my heart with nostalgia. I truly miss those days in gaming.

For those Star Wars fans looking to play some of the classic games from almost twenty years ago I would definitely download this title or find a copy. It is a great throwback to when LucasArts was pumping out amazing Star Wars games that expanded our knowledge of Prequel Trilogy. The controls are fun, the graphics are pretty damn good and I just love seeing the majestic world that George Lucas created with the Prequels. I know they are generally panned, but they were some pretty movies before the Jar Jar. Anyway pick this game up and enjoy destroying the Trade Federation in the newly minted Jedi Starfighter.

There was a time when Star Wars games came out more commonly and were actually enjoyable to play.