You can't escapes within a point and click adventure 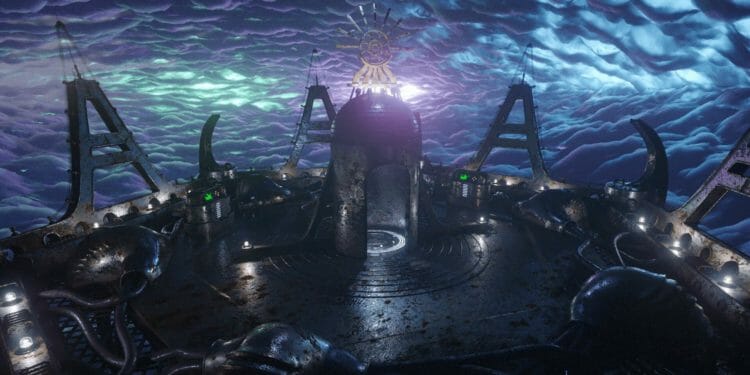 So back in the early ’90s before the rise of horror gems like Resident Evil and Silent Hill, we had point and click adventures and FMVs. These were games with an interesting presentational style which felt more like more interactive movies. They were very popular at the time as developers were limited by the technology and couldn’t create fully functioning 3D worlds.

One of the first of its kind was The 7th Guest, a horror point and click adventure that infused a compelling mystery with a pre-rendered environment. Many of these elements would go on to inspire the likes of Resident Evil a few years later. Even the game we’re taking a look at today, Without Escape.

There was a line-up of games in and outside the horror genre which took this stylish approach. These ranged from pretty good to just plain boring. The format was popular but mainly because outside of these titles, there wasn’t much else to enjoy in regards to horror or an intelligent adventure game.

By the late ’90s, these types of games were out of fashion and soon enough just forgotten. Many still play these games and thankfully many of them are being brought back or inspire developers to make their own.

Without Escape is one of these games. Paying homage as a modern-day interactive experience where the world is pre-rendered and players will explore, gather key items and solve the mystery at hand.

Story-wise Without Escape focuses on a young individual whose home alone and awakens one night to a strange noise. As they explore the house in order to find the cause of the disturbance, they realize that something is not quite right.

There’s blood on the walls, strange images appearing on monitors and television screens, their house gets thrown into another hellish dimension and they can’t escape. You know, that normal type of spooky s***. So the goal for the player is to discover the reason why you’re trapped in your own home and find a way to escape from this nightmare.

Firstly I must day the developers have nailed it in terms of atmosphere and visuals. The game looks very nice and has a great knack for sound design. The intensity was constant due to the soundtrack and the game overall looked the part, resembling a high quality 90’s point and click adventure. Right down to the pacing and feel of the cut-scenes.

A story that needed more

There is somewhat of a compelling mystery at first, as you begin to see surreal imagery, hear weird noises that are genuinely creepy and soon enough be thrown into a strange world that’s horrifying. My main problem is that the game itself is pretty short and doesn’t give much time for a story to evolve.

Many of these games back in the day would relish in lore, giving you plenty of reading material to build a backstory and add to the suspense. Here, there’s very little story development perse and when things are getting interesting, the game ends.

All three endings feel a little anti-climactic and don’t have any impact due to the lack of backstory. I mean if there was at least one satisfying ending then I’d be fine with the others. Not just multiple endings that just feel like a slap in the face.

A game like “I Have No Mouth and I Must Scream” has multiple endings and near all of them are bad. But if you complete a number of difficult requirements, you get an ending that’s wholesome and not such a downer. It’s fine as you’ve worked hard for it and it feels like a complete conclusion.

Even the bad endings have more substance. Even the secret ending in Without Escape is just another slap in the face for completing a certain and tricky requirement. It would be fine if there were more substance that would give the endings a bit more clarity and gravitas.

Players will explore the house in question in order to uncover key items and solve puzzles in order to progress. As a point and click game, you’ll explore the environment which is made up of some very nice looking pre-rendered backgrounds and find a number of key items to unlock new areas and progress.

You’ll find items in the environment by clicking points of interest, such as a chest of drawers or a bookcase. Exploration will require an observant eye in order to key items as they’re usually hidden in plain sight. You can find clues that will lead you to said hidden items which will in return unlock new areas and continue the journey. You’ll often find items you need to combine with others and resorts to simple problem solving most times.

The good, the bad and the clicky

Now I do appreciate that there is a fair amount of lateral footwork needed. Such as looking at a clock and seeing that one of the hands pointing at a bookcase nearby, which you can search and discover a key. But then there instances where other items are hidden too well that you can completely miss them altogether. Such as an important document that’s hidden in the same bookcase and not finding it will resort in being stuck on an upcoming puzzle.

There was also a case where I needed to make glue and to do this I needed blood and resin. Okay so the blood, no problem, it’s in a bathtub and that’s fine. Okay, so the resin. Where the hell would I find it? I check everywhere but in order to get the resin I had to go to an underground corridor and in the corner, hidden, almost blending into the background is a bit of resin you can collect.

So yeah I hate this and believe me this is a cheap trick developer in the ’90s used as well. It’s not a case of Moon logic but all sense does go out the window. Okay so if you were to do this then you should make it a little more noticeable. Some key items do blend into the background or just don’t show up clearly. Meaning you’ll be doing lots of backtracking and painfully scanning and searching every square inch of every screen. It’s infuriating and damn poor design if you ask me.

Now everything else is fine. True the first half of the game is basically hunting for keys to unlock new areas to find more keys. It’s just a big key hunt basically. But I believe this fits well as you change into another dimension and the tasks become more complex in nature. It’s a nice offset having something more grounded and a journey in the second half that’s far from it.

Puzzles are fine as well and often enough were resolved with simple resolutions. But they do a good job of tricking you, leading you to multiple possible solutions before you realize the simplest solution was the right one. This was a little annoying when some puzzles have multiple layers but thankfully these puzzles don’t go on too long.

Overall Without Escape is Fine but lacks certain aspects to make it great. It’s a cool throwback that looks and sounds nice while having a good nack for exploration and problem-solving. Staples of the genre it so dearly loves. But it’s problems to overshadow the praise somewhat.

It’s short-lived, the story feels unfulfilled and there are a few annoying tricks to prolong the playtime. These do let it down but not enough that I wouldn’t recommend it. It’s a good price and kills a couple of hours. I would like to see this developer go ahead and make another game like this but much bigger! I know they can do it and I’d wish them all the luck in the world to make it happen.

Without Escape is a nice homage to 90's point and click games. But while it brings in the good of the genre, it also brings in the bad with some extra stuff for the ride. Looks great and plays fine, but it is short and a little forgettable.