A nice slower-paced game to help pass the time 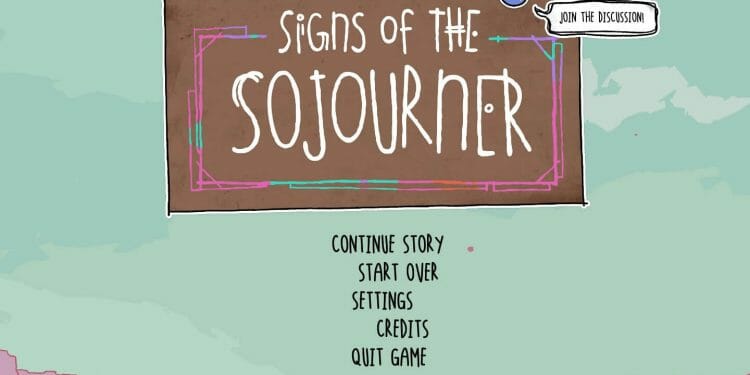 Signs of the Sojourner DEALS

This is my first STEAM game ever, I’ve never been part of the PC Master Race and I love my consoles. Consoles are what I grew up with and having a refurbished desktop computer usually leaves my computer and just a fancy typewriter. Good news this is for people who have a low-end computer and for those who have a maxed out computer, both you can experience this unique game, Signs of the Sojourner on your computer.

Signs of the Sojourner is a very story-driven game, you play as Elias’ brother who has been given the task of running their mother’s store after she died. It is a knick-knack type of store and you must join a caravan to purchase goods to keep the store stocked. If you fail to do this your store and your hometown, Bartow, will most likely go under. Nadine, the leader of the caravan is there to help you on your first journey, she seems to be the only one on your side. The town depends heavily on the money of the caravan that wanders through now and then. The story that you will interact with and read about is the story of this mourning man’s first caravan.

I’m a 90’s kid, so I was lucky enough to have lived when cartoons were in their prime! At first, I couldn’t grasp why I got a super nostalgic feeling playing this game, then I made the realization. Signs of the Sojourner seems to have taken artistic license from early 90’s Nickelodeon cartoons. In this game, I saw Rugrats, Doug, Rocko’s Modern Life type art and it really plucked my heartstrings. With that and the somewhat sad story, it was almost a tear-jerker for me.

The controls are quite simple, you interact with other characters in the game by using cards that have symbols on them. These symbols can change the outcome of the conversation and the game itself. The circle on the card means that an “empathetic and observant” answer will be given. A triangle on the card means that the response will be “logical and diplomatic.” There are four types of cards then, Circle Circle, Circle Triangle, Triangle Circle, and Triangle Triangle. At the end of each conversation, you are allowed to gain a new card and discard one. I used this opportunity to have at least two cards with Circles and Triangles on the left.

To speak in the game you drag a card to the top of the screen, for the conversation to go well you need to match the symbols. If you don’t have a card that matches like in dominoes then you’ll have a hiccup during the conversation, if you get three of the those the conversation ends abruptly. If you match two of the same cards you can save yourself from upsetting the person you are talking to. This means that it negates the non-matching cards should you not have one to match.

This game has very high replayability due to the fact that conversations can go very wrong if you don’t have the proper cards. You won’t do as well with people and therefore could possibly fail on your trip to stock your mother’s store. I like it when games have a lot of replayability, it means that you spent your money wisely. I like games that I can play again and again or games that have a substantial amount of hours to put into them. You can do both with Signs of the Sojourner.

I enjoyed my time with Signs of the Sojourner, it was a nice slower-paced game than what I was playing on my consoles. Final Fantasy VII Remake and Resident Evil 3 Remake are pretty high paced action games where there aren’t too many emotional scenes. This title has some emotion to it, a death in the family is never something to gloss over, and that knowledge hangs with you as you carry out each conversation. To me, this was a heavy game, my Dad’s death is still an open wound, and seeing anything that relates to it gets to me. It is amazing that games have come so far that they can elicit that emotion from players. If you’re looking for a nice, slower-paced game that you can play several times then give Signs of the Sojourner a good look. It will calm you down during these different times we’re living in and perhaps give you something to think about.

Signs of the Sojourner

Signs of the Sojourner is a card based game where you build your deck to have conversations with people and grow as an individual.

Signs of the Sojourner DEALS