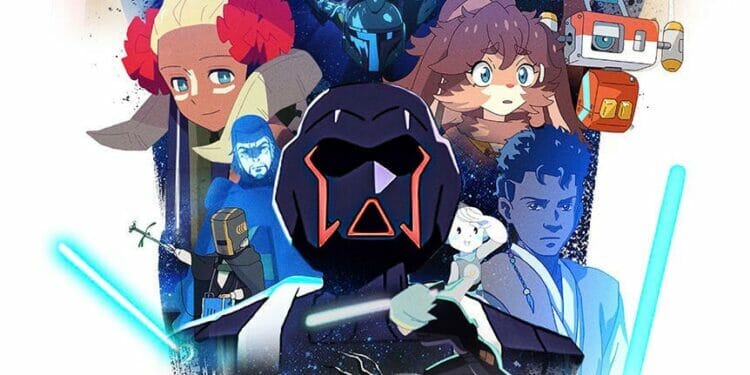 Star Wars has been a saga that has taken influence from Japanese culture. George Lucas has stated that one of his inspirations was Akira Kurosawa’s The Hidden Fortress. You can see it in the characters but also the look of Darth Vader and the use of lightsabers.

The influential nature is cyclical as well. The likes of Mobile Suit Gundam takes clear inspiration from Star Wars. It’s reminiscent of Kurosawa was inspired by Westerns for his samurai films that would inspire more Westerns.

Now Japanese culture and Star Wars meet. Visions is a Star Wars anthology series that comes from a number of studios and creatives. The results are pretty amazing.

The first episode of The Duel starts off the series strong. We get a classic samurai tale complete with black and white for that retro look. Except, you know, it takes place on another planet and with lightsabers.

A wandering Jedi ambles into a village for a stop. The village also happens to be under the thumb of the Empire. When villagers fight back, a Sith goes on the offensive.

In a manner similar to Yojimbo, the wandering Jedi comes to save the day. A duel takes place with lightsabers and the Force. And it looks so good with stunning illustrations under director Takanobu Mizuno.

Not all Star Wars stories have to be duels. Some of them can explore different kinds of characters. The second episode of Tatooine Rhapsody sees to that.

This entry follows a traveling band of misfits. They’re committed to becoming the best band in the galaxy. Even the threat of Jabba the Hutt can’t stop them from rocking.

The art style of this entry is a bit more on the chibi side. That being said, it still looks colorfully alive. The music isn’t too shabby either.

Episode 3 is by far the most dynamic. The Twins concerns two Sith lords bred from birth as twins. They’ve been chosen to helm dual Stardestroyers.

However, one of the twins believes there’s more to life than being evil. An intense showdown occurs with full use of the Force in space. Given that this entry comes from Studio Trigger, the animation is incredibly vibrant and full of energy.

Rounding out the best of the lot is episode 9, Akakiri. This episode finds a Jedi trying to seek a means of the resurrection. So, you know, that thing Anakin was trying to perform in Revenge of the Sith.

This animated short, however, explores when that goal is reached. A desperate Jedi makes a plea to learn this technique. Doing so leads to a surreal journey where he essentially gives up his soul.

A handful of the shorts feel fairly par for the course. Episode 4, The Village Bride, is a fairly simple tale of a wedding disrupted by the Empire. Jedis who decide not to intervene finally decide to take up their lightsabers.

Episode 7, The Elder, deals with a rather routine teacher/student dynamic. A Jedi and his padawan go on an adventure. It eventually ends with them stopping a Sith, looking cool while doing so in the rain.

Episode 6, T0-B1, is pretty much just Astro Boy with a Star Wars theme. The story follows a boy robot who dreams of being a Jedi. The art style and story are remarkably akin to Astro Boy in every way.

All that being said, there are a few more surprises. The mid-tier episodes have their moments of brilliance. At the very least, they’re impressive to look at.

Episode 5, The Ninth Jedi, is a great twisty mystery. A number of Jedi attend a gathering for the development of new lightsabers. However, not all the Jedi maybe there for noble purposes and they may have walked into a trap.

One of the most unique entries is episode 8, Lop and Ochō. It features a cute catgirl as the protagonist but it’s far from a rosy entry. It may even be the darkest for its depiction of a family destroying itself in a feuding city.

Star Wars has relied a bit too heavily on its own lore in the past few years. Every entry requires some foreknowledge. There’s also a lot of nostalgia at play, where even The Mandalorian requires a bit of homework.

This is thankfully not the case with Visions. It’s debatable whether or not much of these stories fit somewhere within the canon. It also doesn’t matter because most of the shorts stand well enough on their own.

Sure, there are cameos by the likes of Jabba the Hutt and Boba Fett in Tattoine Rhapsody. The good news is that they are mere Easter eggs and nothing you NEED to know about. Even those who haven’t been into Star Wars for decades should be able to hop right into these stories.

Visions are exactly the type of project Disney should be developing with Star Wars. It’s an anthology that explores more to its galaxy than just tapping the same old Jedi stories. You can’t grow a brand that way.

More importantly, your franchise won’t stay relevant that way. This anime series feels fresh and reinvigorates what makes Star Wars great. It’s not just about lasers and the Force.

The series has its hills and valleys but it’s ultimately a fun collection of stories. There’s plenty of new ideas, characters, and styles worth watching. I dare say it’s the best thing done with Star Wars in the past few years, for whatever that may be worth.

Did you watch Star Wars: Visions on Disney+? What was the best episode of the anthology? How does it compare to other anime? Is it better than Gundam Hathaway? Let us know in the comments below.

Anime suits Star Wars well with its new stories and characters in a variety of styles.