Batman takes more of a front seat to his own movie this time around. 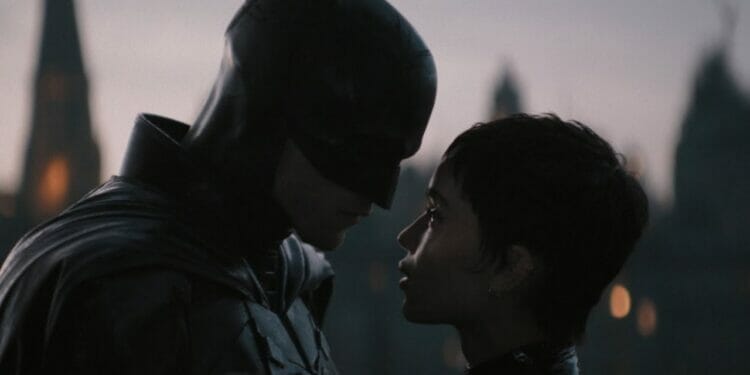 Batman has always felt like a character who feels almost too distant from his own movies. The Batman movies of the 1990s always felt as though the character was too reserved to ever be all that interesting. As Roger Ebert once noted, the only requirement for that type of Batman seemed to be how good the chin looks.

Thankfully, this is not the case with Matt Reeves’s The Batman. Here is a picture that places Batman more in the crosshairs of his own story. We’ve had plenty of movies about his villains and this is the first Batman movie in some time that feels like it’s more about our lead hero than his costumed villain of the week.

The story is a Batman reboot but we don’t start at the beginning or even comfortable phase of Bruce in the cowl. This Bruce Wayne, portrayed by a contemplative Robert Pattinson, is currently in his second year as Batman. And he’s not doing a very good job.

I mean, yes, he is fulfilling many of the tropes immediately that we expect with Batman. He prowls the streets at dusk searching for criminals. He strikes fears into the hearts of evil, to the point where most two-bit thugs have grown scared of the dark.

Batman even says his titular line of “I am vengeance.” But he says this early so that there’s a darkness to this presence. It makes his opening fight a concerning one where even the victim is terrified of Batman’s presence. In his mind, Bruce is questioning if he’s making a difference.

The central villain for this picture is The Riddler (Paul Dano), donning the modern costuming of post-Nolan grim to make him more of a threat. Posed more as a serial killer, Riddler is leaving a trail of dead bodies. The bodies are that of political candidates and police with a corruption connection between them all.

The only clues present are cryptic messages left behind, addressed to Batman. Most of the riddles are easy enough for Batman to solve but some are not. He’ll need to rely on the expert knowledge of his butler Alfred (Andy Serkis) for an extra set of astute eyes.

Though Batman does unearth a major string of corruption in the city, he also learns some dark secrets about the Wayne family. His mom and dad were not so innocent and have some pretty substantial sins to answer for. The question is how Bruce intends to undo the damage left by his legacy.

The Cat and the Bat

An ally Batman gains along the way is Selina Kyle (Zoe Kravitz), also known as Catwoman. Selina doesn’t exactly put on the cat outfit but she is very much a thief in the night. She operates as a callgirl and finds herself bound by revenge when one of her friends goes missing in the criminal underworld.

Catwoman is more interesting for not just being a love interest but a source of Batman’s deepest criticism. As someone who is poor and struggling to survive, she calls out the rich white guys who make all the calls in Gotham City. Though she doesn’t know Batman is Bruce Wayne, there’s little doubt she’d still give him the same heat.

Though Batman is still bound by keeping his identity a secret for security purposes, another aspect of concealing it from Selina is to hide his shame. He realizes that he has to do better and that someone like Selina may fall in love with him if Bruce were more of a champion of the people than a shut-in billionaire. He’s not ready for a relationship as he’s not ready to handle his internal struggles.

Though The Riddler is certainly the prime costumed villain of this Batman picture, the grander villain is by far the mob boss of Carmine Falcone (John Turturro). His mafia dealings with politicians and law enforcement will remain long after all of Riddler’s killings and bombings have ceased. It’s going to take more than a few good punches and well-placed Bat-themed weapons to save this city.

This is a fascinating angle for the film because it focuses heavier on the detective angle while also keeping Bruce Wayne firmly at the center. The more Bruce learns about Falcone’s gang dealings, the more he learns about his family and their dark dealings. There are a lot of skeletons in the Wayne closet that Bruce needs to discover before he can properly clean his own house of aged atrocities.

I also dug Colin Farrell getting all dolled up in ugly makeup for a mere supporting role as The Penguin. Despite being in the film much briefer than the other villains, he serves well as the Iceberg Lounge owner who doesn’t play well with Batman’s investigation. He needs a little punching and a car chase to be coaxed into talking.

Matt Reeves is no stranger to action sequences and these are some of the most exciting in any Batman movie. Aside from the vicious fights where Batman lands some brutal blows, there’s the fantastic car chase. Batman pursues Penguins in his rickety first attempt at a Batmobile and it’s perfectly intense and engaging.

This car chase is a lot of fun for how capable it appears. The camera remains firmly mounted for a sequence involving trucks crashing together, explosive carnage of auto wreckage, and a constant stream of rain. The assembly for this scene is so amazing that it’s a real treat considering how exciting it appears on the big screen.

What holds this Batman film back from being more compelling are the few moments that don’t work as well. For instance, one of the clues Batman receives from The Riddler is a thumb drive literally attached to a human thumb. That seems more like a Joker bit than a Riddler clue.

Speaking of the Joker, there’s also a villain tease in this picture that was apparently not in the first audience cut of the film that was tested. This is a completely unnecessary scene that adds nothing to the story, serving more like a commercial better suited for a post-credit scene. Having a villain teased in the movie feels more like a fan-pleasing element meant to make the fanboys bitterly feud who should play the new Joker or which villain should be next.

I also really wished that The Riddler’s plan didn’t just go into the same finale of trying to blow up all of Gotham City. I liked the idea of Riddler being a man frustrated with corruption and going on a surreal killer rampage trying to make a point. Sadly, he goes full Bane with a plan to sink Gotham City and it’s a bitter reminder that the climax for a Batman movie always has to be overblown with epic showdowns.

The Batman is one of the better Batman movies for not just giving fans what they want but something they never knew they wanted. I hardly expected this latest attempt at the character to be critical of his influence over politics and the class divide. And, yet, here we are with a film that attempts to better go into these areas shied away from before.

While plans already seem to be in place for more Batman projects spawning from this movie, the film itself is great on its own. The casting is perfect, the action is brilliant, and the greater theme present is explored much deeper than I thought. With all things considered, it’s the best Batman movie by a mile.

Did you see The Batman in theaters? What did you think of it? Is it the best Batman movie? How does it compare to Batman: The Long Halloween? Let us know in the comments below.

The best Batman movie to date for being so critical and compelling with the titular character.

The Batman Review – A Brutal and Brooding Masterpiece – Pley 2 Win

The Batman Review – A Brutal And Brooding Masterpiece