In the wake of Crunchyroll and Funimation merging, Crunchyroll has announced its massive Spring 2022 Anime Lineup. This includes new simulcasts from Japan such as SPY x FAMILY, The Rising of the Shield Hero Season 2, Kaguya-sama: Love Is War -Ultra Romantic-, Skeleton Knight in Another World, Date A Live IV, The Greatest Demon Lord Is Reborn as a Typical Nobody, Shikimori’s Not Just a Cutie, The Dawn of the Witch and more. Additional series will be announced soon and updates can be found at Crunchyroll News as they are made.

Simulcasts on Crunchyroll continuing from the Winter 2022 anime season are One Piece, Cue!, BORUTO: NARUTO NEXT GENERATIONS, Dragon Quest The Adventure of Dai, Digimon Ghost Game, Case Closed (Detective Conan), Requiem of the Rose King, and more. The Spring 2022 anime season is already underway on Crunchyroll with season 3 of Legend of the Galactic Heroes: Die Neue These. And fans will be treated to the first two episodes of Estab Life: Great Escape starting March 23, which are airing ahead of Japan’s TV broadcast. 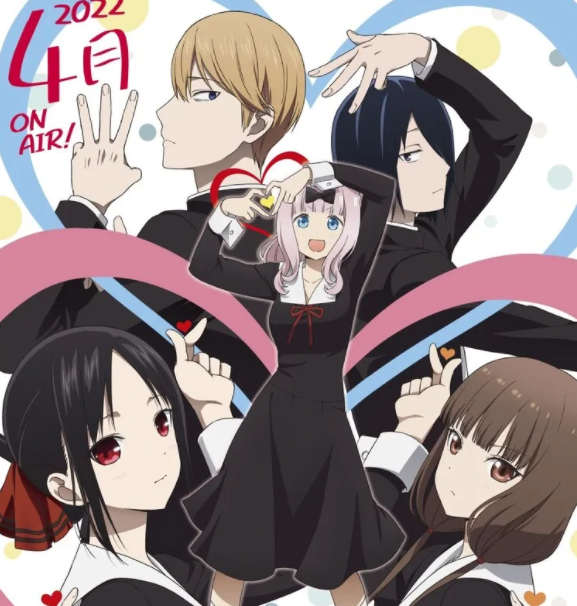 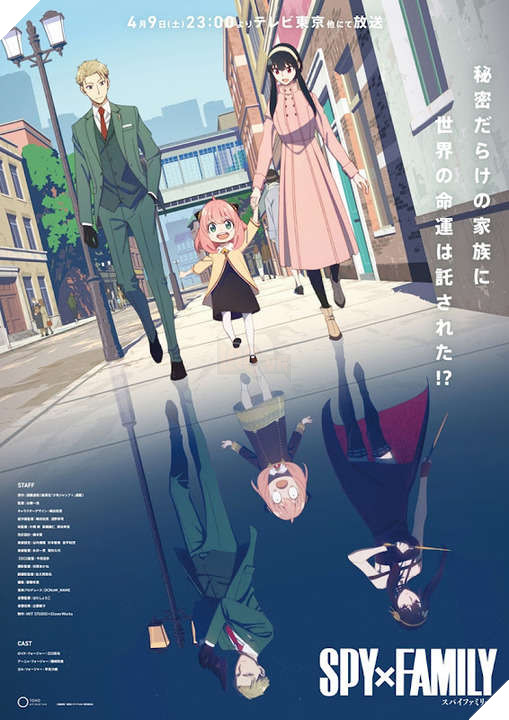 As Yang is ordered to appear before the Free Planet Alliance, he’s shaken by the corruption he discovers. Meanwhile, Marshal Reinhardt uncovers disloyalty under his command as an upstart admiral launches a vicious offensive to retake the Iserlohn Fortress. Struggling to make strides in this never-ending bloody war, these two finally see their true enemy lies not from without—but from within!

When the world’s population shrinks, the Supernatural Renovation Project splits up Tokyo. Divided by towering walls, cyborgs, beast folk, and magical beings are segregated into clusters and monitored by artificial intelligence. Some adjust to their new lives, but many suffer in silence, unaware secret help is available. Have no hope and desperate to escape? The Nigashiyan Extractors will find you!

Science Fell in Love, So I Tried to Prove It r=1-sinθ (Zero-G)

Basking in the sun’s rays, Himuro and Yukimura embrace and share a tender kiss. But was it perfect? Rushing back to the lab for the results, they meet the seductive Fujiwara and her handsome partner, Chris, who’ve performed passionate analysis in love’s pursuit. But is this new couple competition, or can they reveal some insight into their studies? One thing is for sure—more research is needed!

Straight from the online game Mahjong Soul comes Mahjong Soul Pon. The new comical mini-anime adaptation of the game in which the one-of-a-kind Mahjong players dream big and go for a Thirteen Orphans. The Mahjong Soul Shrine is holding truly extrava-kan-t festivities centering around Ichihime! Are you ready to play the game fair and square? Maybe you can draw more Mahjong soul!

At the all-boys Horse Racing School, entrance is incredibly difficult, with only one of every 10 to 20 applicants being accepted. Here students need to not only be book smart, but athletic and in peak physique. Three new students—a popular idol, another from a remote island, and one from England unsure of his path—come to this elite school to pursue their dreams of becoming a jockey.

Ryo Mizushima dreams of being the best badminton player in the world. But despite his natural athleticism and skill—he’s only been able to get so far without a reliable coach. However, everything changes when his talent gets him scouted by one of the most prestigious high school badminton teams. Now, with a pro coach and an elite team to back him up—it’s finally time for Ryo’s journey to soar.

Three years have passed since Teruto’s battle and Neo Kyoto is in ruins. Now people are rounded up by KUGE, the King’s servants, stealing their magical power, all for their leader to survive. Former King, Kikka, finds herself now on the run from the guards too. Helpless with no Build-Divide deck, she finds help in another. Together they embark on a battle for the one they seek to see again.

Few people know the truth: the world is safe thanks to the Magical Girls who are forced to slay Witches. Even though these girls are putting their lives on the line for a wish, rumors say they can be saved in Kamihama City. That’s where Iroha Tamaki is headed in search of answers. She can’t remember the wish she made to Kyubey, but a shadowy figure haunts her dreams.

Trapped in a Dating Sim: The World of Otome Games is Tough for Mobs (ENGI)

One office worker uses their otome game smarts after being reincarnated into a series they’ve played before!

High school student Katagiri Yuichi, who values friendship above all else, enjoys a fulfilling life with his close friends Sawaragi Shiho, Mikasa Tenji, Shibe Makoto, and Kokorogi Yutori. However, after a particular incident, they’re dragged into a debt repayment game.

The Rising of the Shield Hero Season 2 (DR Movie)

The most powerful Demon Lord in history, Varvatos, felt that he had accomplished everything he could as a king. Because he was so alone due to how powerful he was, he longed for a much simpler life. A few millennia later, he is reborn as the villager, Ard Meteor. But in the future where he was reborn, magical civilization had declined and magic itself had become weaker

When Arc wakes up, he discovers that he has been transported to another world in the body of the character he was playing in an MMO. Looking like a suit of armor on the outside and a skeleton on the inside, he is the Skeleton Knight. If his identity is discovered, he could be mistaken for a monster and become a target!

The Dawn of the Witch (Tezuka Productions)

Seville is a student at a magic academy who has no memories of anything from before he joined the school. This is the story of how a young man, a boy who is no one special, and his companions, who all hold wounds in their hearts, set out and end up finding themselves.

Shuchiin Academy—an elite school where the most gifted students flock to. It is also where its Student Council brought together Vice President Kaguya Shinomiya and President Miyuki Shirogane. While everyone expected a speedy courtship and agreed that the two geniuses would make the perfect couple, the pair, it seems, has too much pride to confess their true feelings for one another! The two remain fully committed in devising a highly cerebral strategy in this cunning war of love… Will they take their relationship to the next level by the final day of Shuchiin Academy’s culture festival!?

With multiple Spirits now living with him, Shido’s juggling act of giving ladies attention is never-ending. On top of that, more Spirits arrive for him to put the charm on. As he seals more and more, with his intentions unknown to them, will he be able to keep this up or will it lead to one big, giant spatial quake?

Second-year junior high school student Junpei was fascinated by ballet as a boy but gave up on dancing after his father’s death, thinking that he had to act more manly. However, one day, a beautiful transfer student named Miyako appears before him.

Love After World Domination (Project No.9)

One spring day, a young, innocent couple sits side by side in a field. Their names are Fudo Aikawa and Desumi Magahara… but they are actually “Red Gelato,” the leader of the heroic fighting force Gelato 5, and “Reaper Princess,” a combat force member of the secret evil organization Gekko! These two are supposed to be enemies, so the public can’t know that they’re dating no matter what. All they can do is see each other secretly between fights. This spring day is just another day of them happily enjoying their time together while the fierce flames of a violent battle blaze right next to them!! This is a story of a hero of justice and an evil warrior trying to be lovey-dovey without being seen!

World peace is at stake and secret agent Twilight must undergo his most difficult mission yet—pretend to be a family man. Posing as a loving husband and father,

he’ll infiltrate an elite school to get close to a high-profile politician. He has the perfect cover, except his wife’s a deadly assassin and neither knows each other’s identity. But someone does, his adopted daughter who’s a telepath!

In the Heart of Kunoichi Tsubaki (CloverWorks)

Deep in the mountains in the middle of nowhere lives a group of kunoichi called Akane Class. These kunoichi work hard together to improve their own skills, and they all live by an unbreakable rule: “Contact with men is strictly forbidden.” But everything takes an unexpected turn when Tsubaki, leader of one of the groups, starts experiencing strange feelings whenever the subject of men comes up.

Ashito Aoi is a middle schooler who lives in Ehime, and the ace of an unremarkable soccer club. The day that they lost the final tournament of middle school, Ashito runs along the ocean in frustration, before running into a man who had been watching his game. That man is Tatsuya Fukuda, the coach of the high-school-aged Youth team of a leading J-League team, “Tokyo City Esperion FC.”

Don’t Hurt Me, My Healer! (Jumondou)
The misadventures of a knight and a healer begin in this new fantasy comedy series!

Ascendance of a Bookworm Season 3 (Ajiado)

After becoming a blue priestess apprentice, Main continues doing everything to protect her loved ones. With some nobles targeting her because of her magic, she becomes the adopted daughter of Karstedt. She’s assigned a personal knight, which would mean leaving her family. Will Main be able to protect everyone while pursuing her goal of creating a letterpress, with danger lurking around?

A Couple of Cuckoos (Shin-Ei Animation)

16-year-old super-studier Nagi Umino, second-year student at the Meguro River Academy high school, was switched at birth. On his way to a dinner to meet his birth parents, he accidentally meets the brash, outspoken, Erika Amano, who is determined to make Nagi her fake boyfriend as she never wants to actually marry.

Schedule subject to change. More titles will be announced and added in the days ahead. Updates can be found on Crunchyroll News.

Are you a Crunchyroll  subscriber? What do you think of the upcoming slate of anime? Let us know your thoughts in the comments section below.