When it comes to iOS games there seems to be an ironically endless supply of Endless Runners. Constantly rehashed, the genre can tire incredibly quickly, and it takes some real originality to grab the interest of the general public. Fortunately, after the relative success of its console incarnation, Mini Ninjas has now joined the plethora of Endless Runners for iOS and it’s safe to say that Square Enix has made this run a memorable one.

As you’d expect from an endless runner, you run, lots. The aim is to constantly chase a dragon that has stolen a sacred artifact that possesses the ability to open portals to other lands. This teleportation means the environment changes as you progress, helping to stop the game turning stale. Along with chasing the dragon, your character (Hiro) also has to defeat an array of evil samurai warriors who will jab, swipe, shoot, and swoop all they can to bring you down. The enemy variety is simple, but makes gameplay challenging at times and requires some quick wits in later stages. 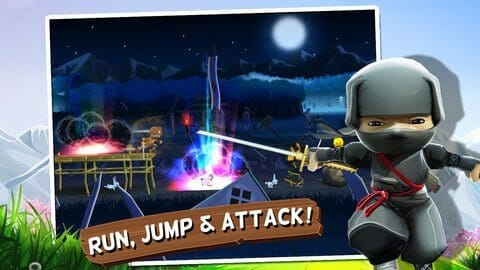 Along with Hiro, you can occasionally play as one of his friends and utilize their abilities, such as koin magnetism and gliding, to your advantage. Collecting the in-game currency of Koins will allow you to purchase helpful items at the Dojo such as potions, new outfits, weapons, and even your pet. Players can also purchase Koins as a micro transaction instead of earning them in the game, if you’re that way inclined. As expected, Mini Ninjas is ridiculously addictive and plays extremely well, basic tap to jump and tap to attack mechanics make the game easy to pick up and impossible to put down. 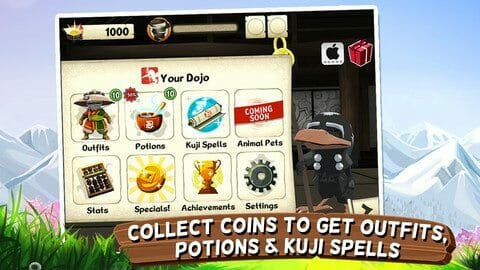 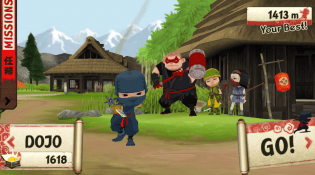 The overall feel of Mini Ninjas is a warm one; fresh and vibrant colors instantly get you exploring the scenery of the environment whilst the unobtrusive animations do little to detract from your all-important running. The constantly changing environments are all pleasant, possessing their own traits whilst coming in both daytime and nighttime varieties. Enemies are easily distinguished by color and costume, also crucial potion pick-ups are identified by their helpful glow. Even though the game can often get infuriatingly challenging it’s never the fault of the layout or presentation of the game, even if certain menu items could have their own brief tutorials to help early navigation.

Where many endless runners will just loop the same track causing your ears to bleed, Mini Ninjas has “land specific” music. This basically means because you’ll never run in the same land twice, you’ll never hear the same track twice in a row. Splendid. Enemies make comedic little grunts and yelps every now and then, there’s also a rather satisfying “thump” when you bash them over the head with your sword. Whilst never destined for a number one spot in the charts, the sound for Mini Ninjas is a positive addition to the whole gameplay experience where usually it’s the weakest point of games in the same genre.

As with most iOS games, don’t expect stunning HD crystal clear quality. Though Mini Ninjas doesn’t strictly disappoint in this department, it doesn’t particularly dazzle either. Animations are satisfying and definitely give characters life and personality, but aren’t particularly memorable, although this doesn’t strictly affect the enjoyment of gameplay, it does offer some room for improvement. 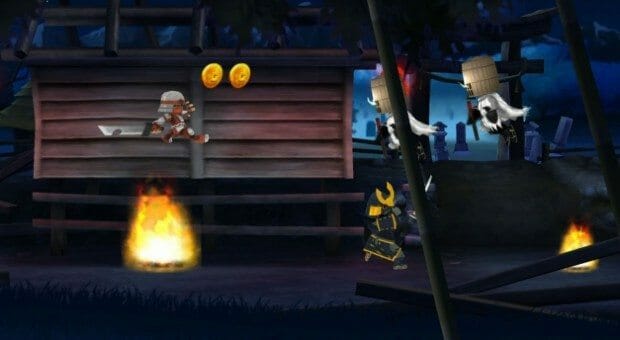 Arguably however, the lower quality of the graphics could be to enable a higher frame rate, and therefore a smoother and more stable game. Whilst connected to Wi-Fi Mini Ninjas performed perfectly without a stutter in sight, loading screens were blindingly brief and samurai slashing was swift. On 3G however it was a slightly different beast. When things got slightly fast paced the game would splutter and jump, causing some crucial gameplay blips that often ended the run prematurely. This was especially a problem whilst on the move or on public transport, too many games were being abruptly cut short by unresponsive blips.

This is most likely due to the Facebook and Game Center connectivity, which is awesome when you want to try and smash your mates’ score, but a real pain when you’re trying to kill some time on a long train ride. The omission of a settings menu adds insult to injury in this case as this connectivity cannot be turned off, hopefully a simple update may fix this in the future. 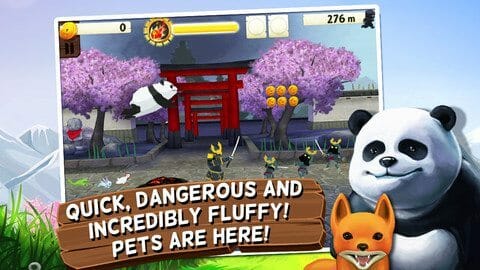 Although not about to change the world, Mini Ninjas does offer an original take on the endless runner format that has been rather lacking of late. It’s an honest game and doesn’t try too hard to excel at any points, but delivers satisfyingly well across the board. Well worth the $0.99 fork out and will have you signing up for katana lessons in no time. If you enjoyed (or didn’t enjoy!) Mini Ninjas feel free to give the game your own rating above and share your thoughts with the BagoGames crew in the comment section below. 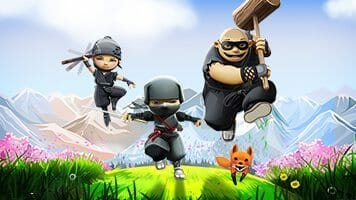 Mini Ninjas is available now on the App Store for £0.69/$0.99. This game was reviewed on an iPhone 4, the game version was 1.0.1. All information regarding prices and in game items was correct at the time of reviewing. 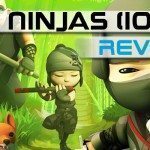