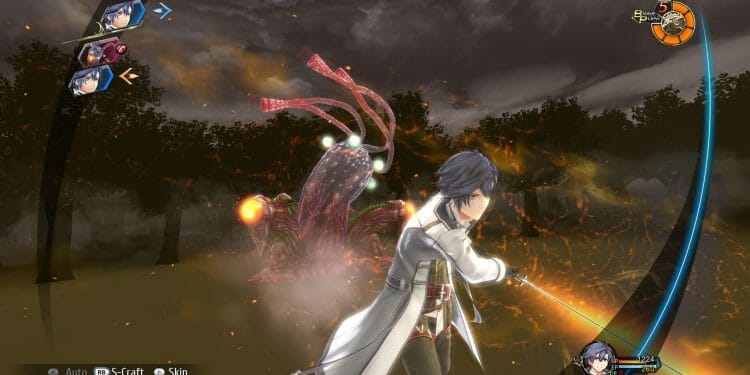 The Legend of Heroes: Trails of Cold Steel III recently had a demo released on Steam. Previously released on PlayStation 4 in October of 2019; its release of the PC demo signifies its rather close launch date, that being in 11 days (as of the time of writing). Does the new PC port, with its added localization features and updated features from its predecessors, hold up with previous titles? Here are our Trails of Cold Steel III Demo First Impressions. 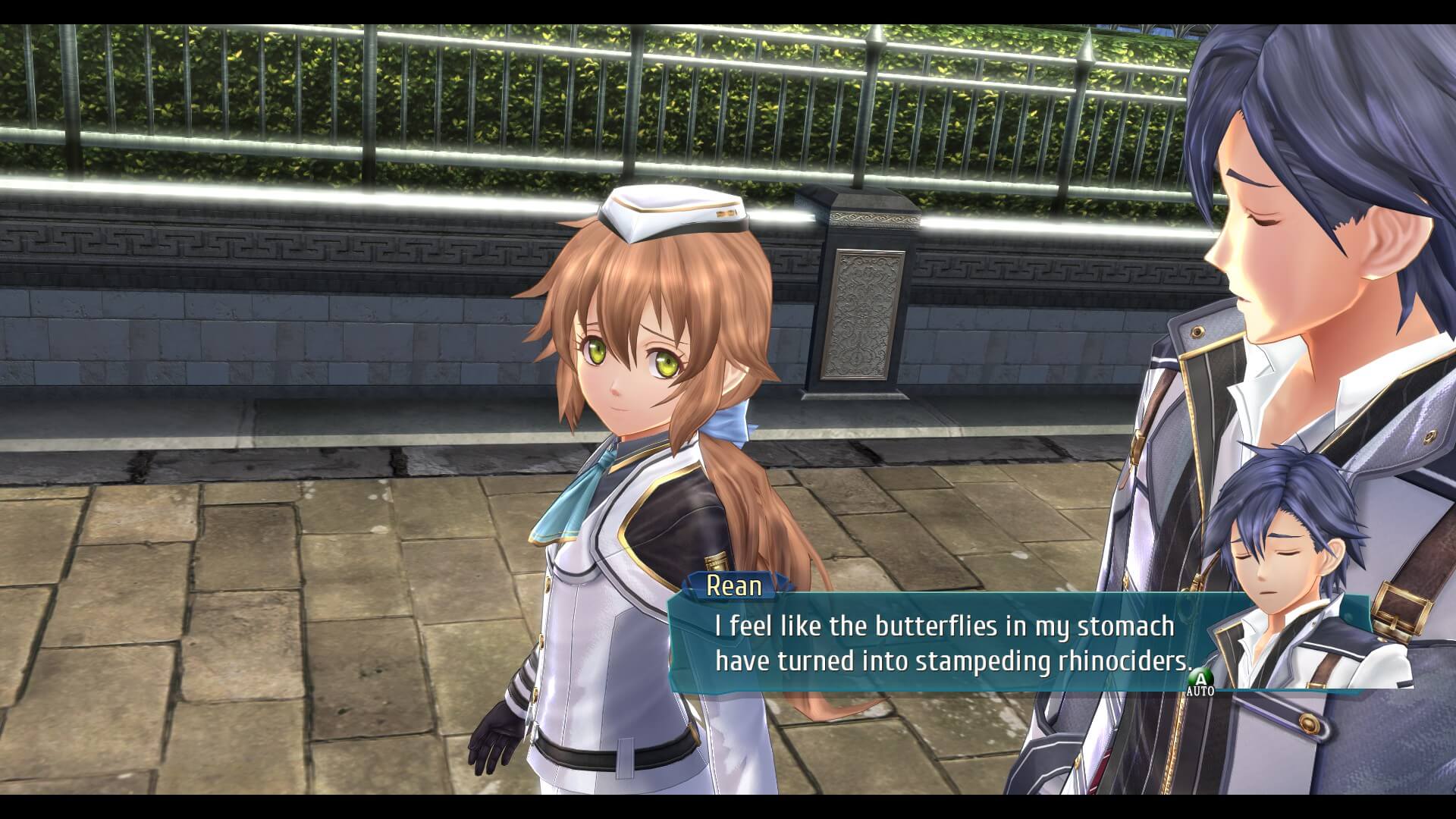 Upon launching the game, Trails of Cold Steel III has a special mode for those who are trying this game without playing previous entries. This mode details what happens in the plot of the last two games. This allows those who are unaware of the plot and general world lore to quickly catch up if needed, great quality of life decision.

Outside of that, the player is allowed to play the game either with its original Japanese voices, or the dubbed English voices. Five difficulty settings are available to the player. Enemy aggressiveness is what is most affected by the difficulty levels; the highest difficulty obviously being the most unforgiving when it comes to punishing player missteps. 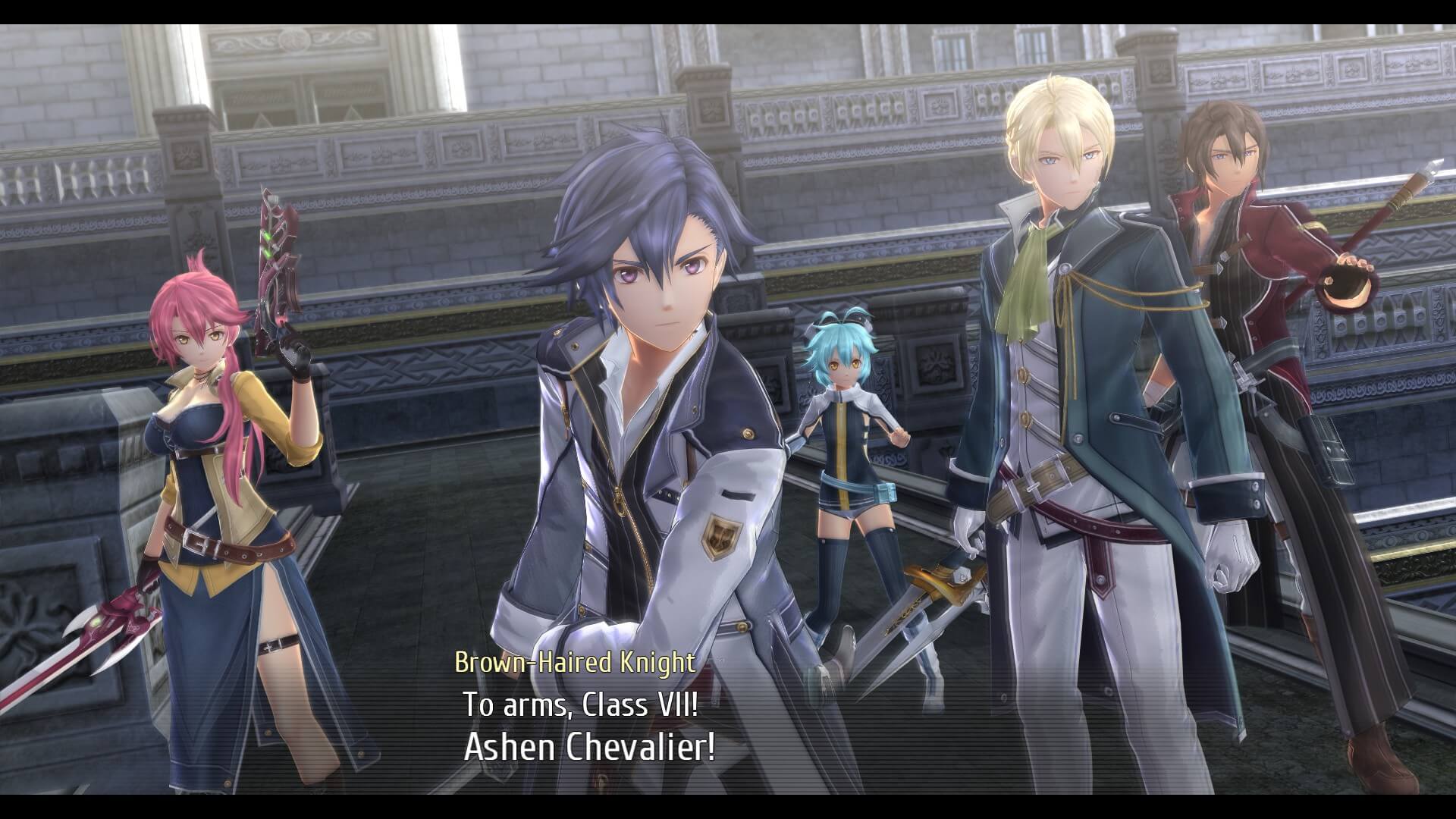 Upon encountering the first group of enemies, the game seems to bombard the player with a ton of nuanced mechanics with no explanation. This leaves the player initially confused about what strategy to employ, how attacks work, and what every type of action does. It’s quite overwhelming to an outsider looking in, at first glance.

For instance, characters have different attack ranges based upon whatever attack or spell they choose to cast. Every action has a specific radius of action. Some of these actions are in circles that a character can either interact in or hit in that range, or a line that a large attack will travel in. This makes coordinating attacks sometimes tricky, especially if enemies are scattered.

Another key feature is simply, movement. By pressing the B button, the character can use their turn to move to a different position. This tool will come in handy when trying to dodge big attacks that can deal significant damage to party members. This feature, if used properly, can greatly minimize damage taken by party members.

Attack damage follows eleven major types: Seven elemental and four physical. Each of the four physical types, Slash, Pierce, Thrust and Strike, all are uniquely effective on varying enemies, and each will deal bonus damage if they strike a target weak to their damage type.

Elemental Damage is separated by seven categories, four of which were usable in the Demo; Water, Earth, Fire, and Wind. There is a Time based spell, but it lowers Speed. The other two types, being Space and Mirage, were not utilized in the Demo. 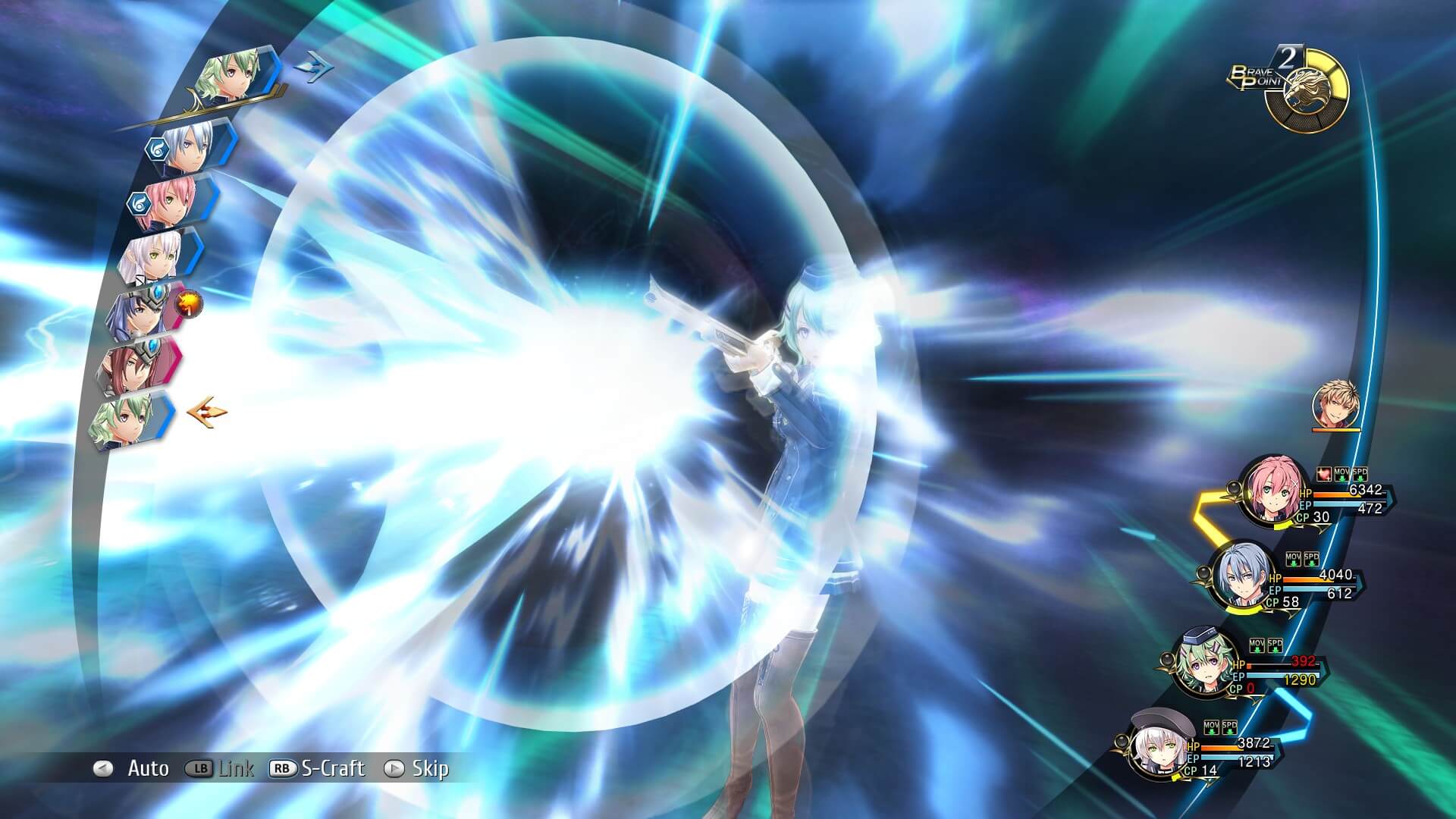 All of the playable characters have two special skill pools to choose from. The first, being Arts, is when a character activates a spell that consumes Energy Points (abbr. EP) to attack with elemental damage. However, this consumes the target’s next action. The other is Craft Arts, which consume Craft Points (abbr. CP) but are activated instantly. CP is built by successfully landing attacks.

Amongst those, two other major factors are important. Battle Orders are one such important instance. Upon activating an Order, teammates will be buffed based upon the order given (for instance, in the first scenario, one of the Battle Orders will cause an attack power boost). The other important factor, being the Link System, is equally, if not, more important. 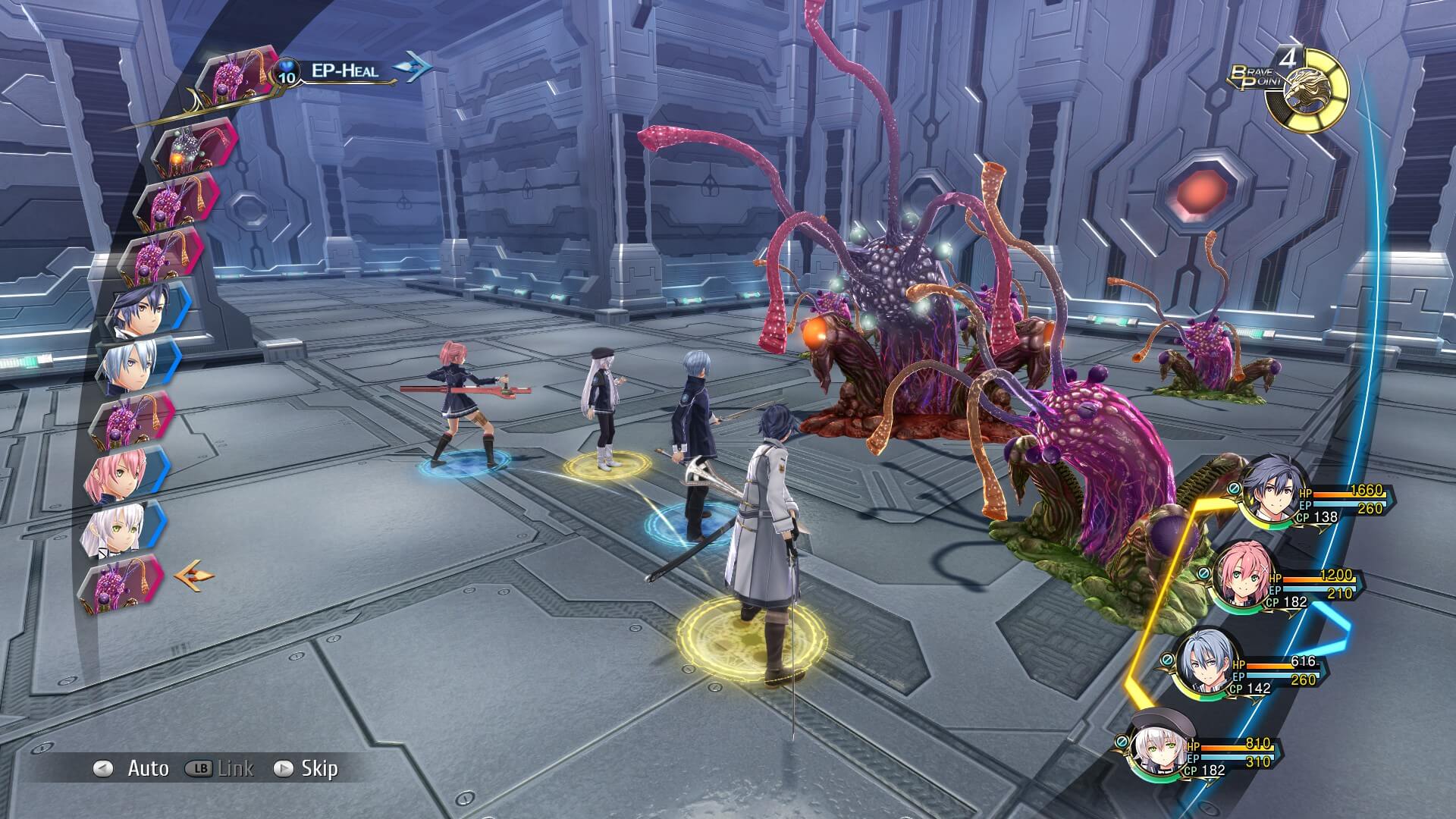 One of, if not, the most important parts of combat is the Link System. This system can allow two party members to support each other with different benefits, including follow-ups to attacks, healing, etc. Links can be changed between party members at any time when not in combat.

Leveling up Links unlocks additional features and support skills for the Link in question. Starting out, and throughout the demo’s second half, the player only has access to the first additional battle function, Assist. This causes an additional attack from the linked Party Member.

Eventually, Burst is unlocked, where both characters perform additional attacks and finally Rush, which has all party members attack all targets, similar to the Persona series’ All-Out Attacks. 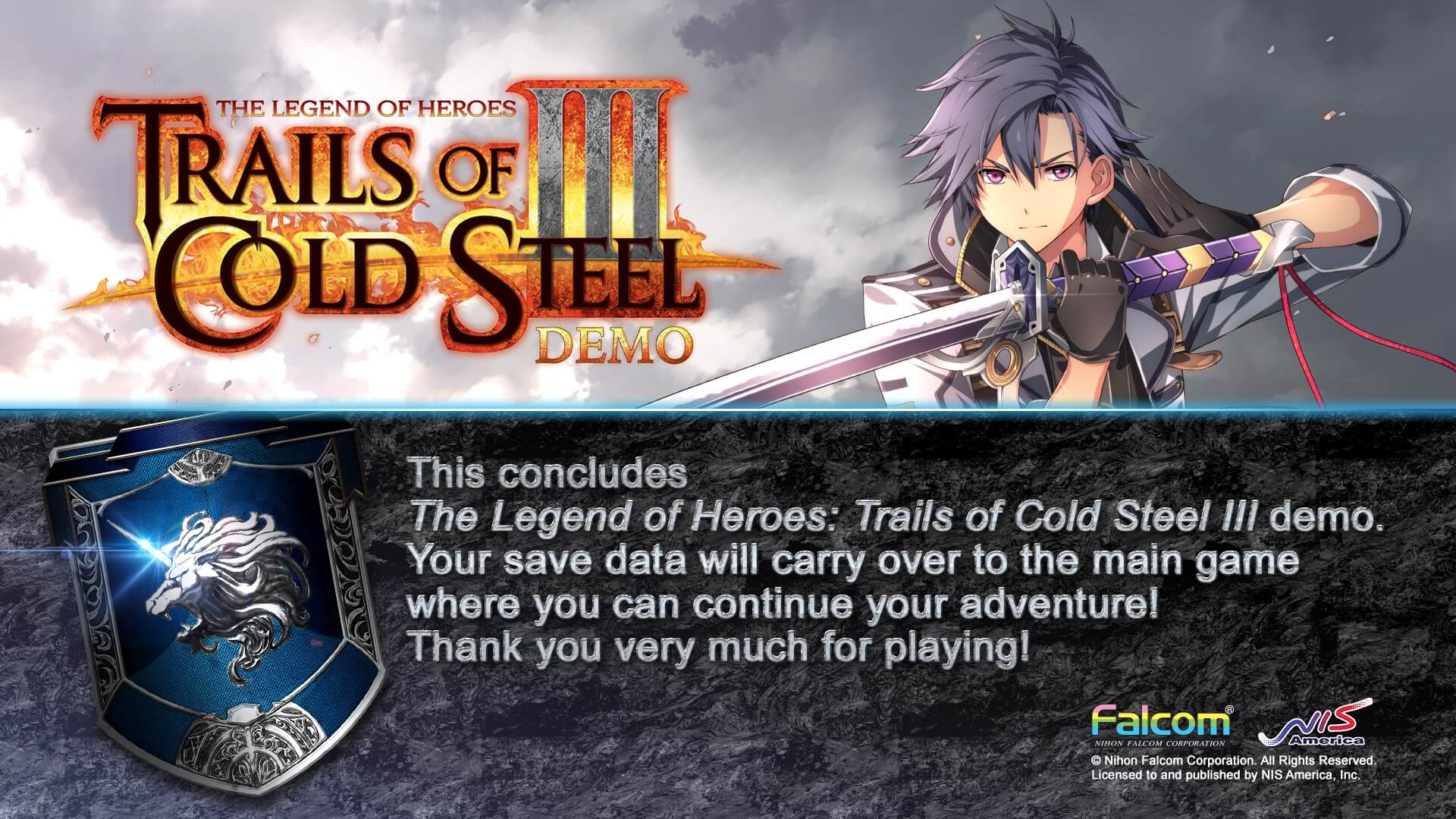 In closing, the Trails of Cold Steel III Demo is an interesting case. For what it does in its extensively detailed and deep combat system, it does little in explaining to those who have no idea what they’re doing until after the game skips to the second playable chapter, where the tutorial is actually contained.

The game will walk you through the basics of the combat system in detail. This helps answer questions players may have about mechanics that they don’t fully understand, and also serves as the game’s prologue. Completing the Prologue allows for the player to carry their saved data over to the main game, should they purchase the full game.

Overall, for what the demo has in content and depth, it makes for an interesting battle system to play around with upon playing.

Way Behind On Your Seasonal Anime? Here Are The Shows To Catch Up On!