Valve Adds Tribute To Rick May In Team Fortress 2 Update 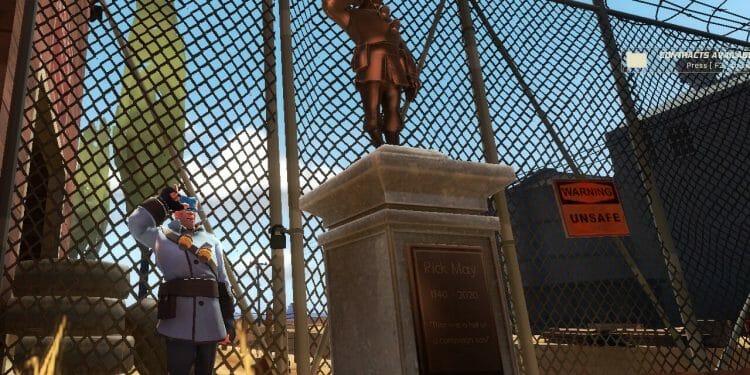 Team Fortress 2 got a lot of its charm from its cast of characters. From the energetic Scout, to the psychotic Pyro, the cast was as diverse as each character was distinct and memorable. One of the most beloved of the characters of course was the Soldier.

Unfortunately, on April 8th, Soldier voice actor Rick May passed away due to complications from a Covid-19 infection. The actor was already recovering from a stroke which happened in February. And with his already compromised health, the virus proved too much for him to handle.

As a tribute to the voice actor, Valve has decided to dedicate the month of May to his memory. Statues of the Soldier together with a memorial plague have appeared in numerous Team Fortress 2 maps. And the main menu theme has been changed to Taps, a bugle played at military funerals.

The Death Of A Soldier

Rick himself served in the military. Mostly stationed in Japan, coordinating USO shows from Tokyo. So it seems even while serving in the military, the actor was there to bring a smile to people’s faces.

In addition to his role as the Soldier, some of his most prolific roles in video games include:

The Team Fortress 2 tribute will last through the month of May. So now may be a good time to sign on and pay your respects to Rick May’s memory. You can check out more information on the update here.

Luckily, his characters will live on. And no doubt his many voice lines will remain in our memory for a good time to come. It’s just a shame we never got to hear more from the man.

Rest in peace, Rick May. And may you soldier on wherever you are.

Video and screenshots by Ule Lopez