Venom finds the fun and heart of its messy premise. 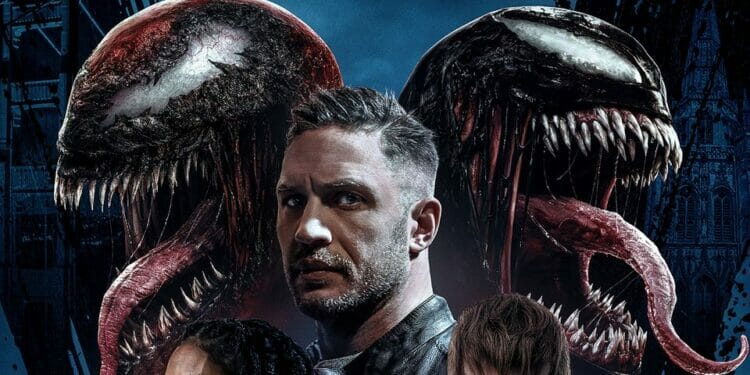 2018’s Venom was not a film that won me over. The action was clunky, the pacing was off, and the horror aspect felt jarring. There was still some potential, however, for such bombastic scenes of Tom Hardy jumping into a lobster tank.

The sequel of Let There Be Carnage is a vast improvement in every way. It’s not just the direction and pacing that’s been improved. It’s a film that realizes the true strength lies in the romance of Eddie and Venom.

The Oddest of Couples

Eddie Brock (Tom Hardy) is still working as an investigative journalist. He’s also still serving as the host body for the deadly symbiote Venom. But the two are not exactly getting along.

Eddie still hasn’t gotten over breaking up with his girlfriend, Anne (Michelle Williams). Realizing she is getting married, Eddie slips into a depression. Venom tries to cheer him up with a breakfast that is well-meaning but sloppy.

Venom, however, is also going through his own thing. He desires human brains to survive but Eddie restricts him to chicken and chocolate. This diet makes Venom angry enough to break up with Eddie as well.

Eddie and Venom need to reconnect as they have a new villain to contend with. Cletus Kasady (Woody Harrelson) is a convicted murderer on death row. Eddie takes an interest in this prisoner for his eloquent ramblings.

Cletus, however, gets some of Venom’s good inside him and transforms into the being Carnage. Cletus and Carnage are not really an interesting duo. Cletus has a history of killing people and Carnage just wants, well, chaos.

The only interesting aspect is that Cletus has a love interest. He’s infatuated with Shriek (Naomie Harris), a woman with the power of an ear-splitting voice. That voice is going to strain the Cletus/Carnage dynamic as the alien symbiote can’t stand loud noises.

This sequel makes the smart move by centering entirely around stopping the villain. The more interesting angle is how Eddie and Venom live with each other. The relationship becomes less of a battle of man and monster and more of a buddy picture.

This feuding goes far more than just having funny scenes. Although to be fair, there’s a lot of funny scenes between them. Venom’s handholding method of trying to walk Eddie through his investigation is hilarious.

The feud is more about how much love Eddie and Venom have for each other. Their breakup is not just a silly parody of romance. It really hits them in a way that leans further into queer territory that is surprisingly refreshing.

There’s a particularly great moment when Venom splits with Eddie. It feels like an angry break-up where Venom smashes up Eddie’s apartment and his motorcycle. He then finds other host bodies to inhabit, sleeping around essentially.

Then comes the best scene in the film. Venom attends a rave in his new body and grabs the microphone. In front of a crowd, Venom announces “I’m out of the Eddie closet.” The audience, mildly confused, cheers him on for being true to himself.

Though there’s some humor in people misinterpreting Venom’s rant, but it’s treated with sincerity. Venom really does miss Eddie and finds himself longing for his host. Even brain-eating alien monsters need friends or possible lovers.

Part of my major hangup with the first Venom film was how it was shot. Venom was often seen obscured in smoke and hidden in shadows. The sequel, however, is practically a different film.

Even when Carnage is bounding across the screen with dozens of appendages, it’s easy enough to tell what’s going on. There are also some great choices in fight locations. The climax in a church is perfect with a stained-glass background as Carnage ascends.

The special effects don’t the picture down either. The transformation between Eddie and Brock feels natural. There are several scenes where they share different parts of the body in a rather clever way.

In the same way that the film better embraces the bromance, it also takes advantage of more of the humor. The film is relentlessly funny in its slapstick and dialogue. Venom does as much lashing with his tongue as he does slapping Eddie around his apartment.

This humor also aids in making the tender moments all the more charming. Eddie and Venom argue but they clearly love each other. That’s not an exaggerated observation either, as Eddie literally gets Venom to say he loves him.

This unexpected sweetness makes this story work so well. It becomes more of a tale about breakups and love than it does about beating the bad guy. Since the bad guy is pretty basic, that’s a good thing.

Conclusion: Venom: Let There Be Carnage

Breezy and eccentric, Venom: Let There Be Carnage is a real treat. Its sweetness is genuine amid all the gross goo. The special effects are as creatively utilized as the compelling character dynamics.

I’ve heard some argue that this film wouldn’t be as great if it didn’t have an R-rating. I’m assuming it’s because the fans want to see Venom stir up some gore. Thankfully, this film doesn’t require blood and guts to be a pleasing bit of fast-paced comic book fun.

Although, if we’re talking about an R rating, I’m still for that in terms of profanity and sex. That Eddie and Venom sex scene would be wild. One can dream.

What did you think of Venom: Let There Be Carnage? Did you catch it in the theater? How does it compare to Shang-Chi? Let us know in the comments below.

Venom: Let There Be Carnage

A giddy and charming anti-hero story that finds the right chemistry.

Away: The Survival Series Review

SNK vs. Capcom Match Of The Millennium Available Now On Steam