A retro arcade game with a few twists 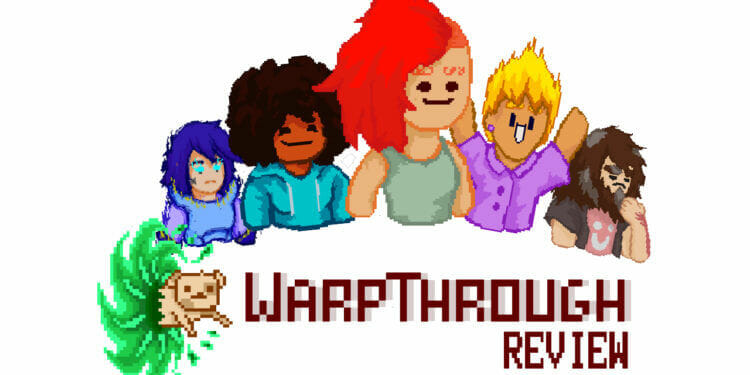 I’ve been playing WarpThrough for a while now and I’ve been kind of struggling to find a good way to review it. I mean,  it’s like reviewing Undertale. You can’t talk about it without spoiling too much about it because so much of it relies on the player going in blind. While WarpThrough isn’t quite like that, it still took me by surprise in all honesty.

It’s one of those games that seems like a simple concept on the surface. You know, like in Undertale it just seems like a simple RPG at first. Before you realize the game has branching paths, a deep battle system and a ton of lore. WarpThrough is kind of like that. So let’s start off with what the game has a surprisingly large amount of, the story. 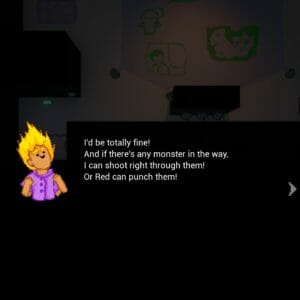 WarpThrough at its core is a game about a family living in a world overrun by monsters, and trying to find a way to stop the invasion. Manor is a large man with a penchant for science, who has discovered a way to make portals into the dimension the monsters are coming from. It would seem these dimensions are filled with warps, and harnessing their energy could be the key to stopping the invasion.

To do so, he’s employing the help of his family, all training to fight monsters in their own ways. Charlotte, (AKA Red), is the first one to be controlled by the player. Her ability is to punch the monsters. The second character is Three, a blonde dude who uses a powerful laser gun to deal with enemies. He’s also a bit annoyingly enthusiastic, but he might grow on you.

Then there’s Ebbie, who uses the family dog Ball as a weapon. Which… might ring some alarms for PETA but let’s not tip them off on that. He seems happy enough. In order to keep his family safe, Manor equips them with teleportation bracelets. These allow them to teleport back safely when something goes wrong. Essentially, this is an in-game mechanic for explaining why you have infinite retries on each level.

The story is mostly there to explain the gameplay though as you play through the game and complete levels, you get temporarily caught in this other dimension with nightmarish beings that you only know as demons, and it is highly likely these are the beings that have caused the invasion and are controlling the monsters you’re fighting. They don’t seem very friendly either, taking every opportunity to make humans seem like the invaders.

So honestly, the story is way better than I expected it to be and the game had me pretty excited to keep playing, just to see how the story would go. 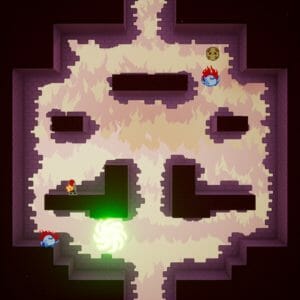 WarpThrough plays very differently from most games. Mostly because you only have 4 buttons for the controls. Those being the arrow keys or the d-pad. That’s all the controls you get. It’s rather ingenious how Roofkat made the gameplay almost centered around this limitation.

In order to attack you simply have to wait for a bit and then press any direction to launch an attack in that direction. I will admit that at times, it’s really clunky. The only characters I felt were able to pull this off efficiently were Red and Alyss. I never felt fully comfortable with Three, Manor and Ebbie. 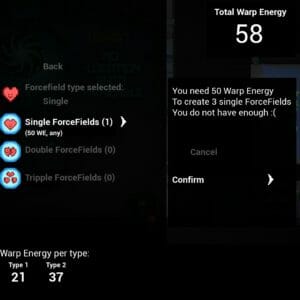 Mostly because Three’s weapon is a gun that while ready for attack will constantly spin. And when you move, it will fire in the direction it’s pointing. I dunno, it just seems unnecessarily complicated. It’s like they added a bit too much to what should be a much simpler attack. In my opinion, it would be better if ceasing input made his gun charge up, and then pressing a direction would fire the gun in that direction. And pushing multiple directions could fire it diagonally even.

Ebbie’s concept of using Ball as a weapon is cute and fun in theory. The issue is that you have very little control over Ball’s movements. I’d often end up being killed simply because his movement is a bit erratic, and he doesn’t always go where you want him to. The idea is that when you stop, you call for him and he moves to your location, taking out any monsters he comes in contact with.

Manor’s gameplay style is that when you attack, he releases a cloud of lethal farts. At least that’s what I think his attack is judging by the sound and style of attack. Either way, it’s not a bad attack. But it depends on you moving the opposite way of the enemies. Since you release the attack behind you rather than in front of you like the others.

So in general I felt the attacks were a bit hard to learn. I think the devs might have tried too hard to make funny attacks rather than making sure they worked well. Alyss is of course really fun to control given her extreme power. But she is controlled for such a short time in what I played that it renders her attack mostly kind of underutilized. It may be that she’s playable in a New Game + mode or something upon completing the game which I still haven’t. 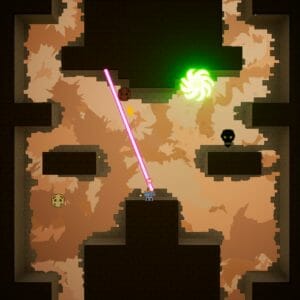 However WarpThrough isn’t really about attacking. It’s more so like a speedrun where the goal is to get as many warps in a level as possible. Each warp adds warp energy to your collection which you can later use on forcefields. These give you an extra hit to take before you die since without them, you die in one hit with a monster. They also take out all nearby monsters on the screen when you are hit, so they can be a tactical advantage as well.

Each warp you jump through increases the amount of enemies in the level, which makes it harder to reach the next warp. That being said, there is usually only a set amount of warps you need to get through in order to unlock the rest of the game. So while you can keep going to get a high score and get more energy, the game does have a progression.

The levels also wrap around. This means jumping through the bottom or the sides will bring you to the other side of the room. WarpThrough can also be played in local co-op with up to 4 players. There’s also an arcade mode which I haven’t tried but it’s probably fun for those who just want a simple arcade experience. 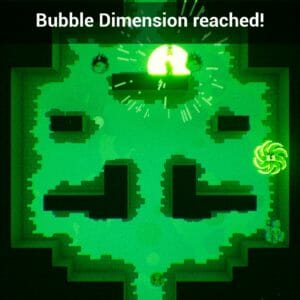 If there is something very positive I have to say about WarpThrough then it’s that it looks really cute. Characters are drawn with a lot of personality and charm. The character portrays are really good at conveying emotion and add a lot to the story sequences.

Generally WarpThrough has a very cute pixel art style. It doesn’t really do much to stand apart from other retro style games on the market, but manages to still look endearing. A lot of the monster designs reminded me of stuff from Undertale, having a similar cute art style. The demons are probably the best designs though. They manage to look really creepy since everything else seems so cute and friendly.

In terms of sound it’s not bad either. The sound effects are pretty cool. And the music has a cool effect of changing style and melody. It does so every time you enter a new warp, without losing the beat.

I also liked the voices of the characters that helped to give them personality. It definitely went a long way to help me hear their voices in my mind when reading the dialogue. 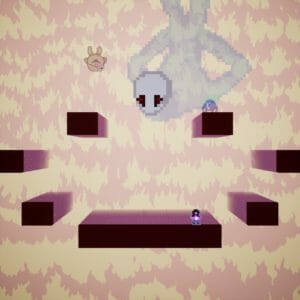 WarpThrough is unfortunately a bit of a mixed bag. While I enjoy the unique gameplay and interesting lore, I feel the game is still a bit too short. The final level is also way too hard in comparison to the rest of the game. The difficulty curve could easily do with some balancing in my opinion. I also encountered some spelling errors while playing the game.

I definitely find the lore of the game really interesting though. As a story the game is really good. I just didn’t find the gameplay sufficiently fun to make it worth getting through. But if Bubble Bobble crossed with interdimensional beings and 4 player co-op sounds like your cup of tea, then definitely check out WarpThrough.

What do you think about our review of WarpThrough? Do you agree with it? Are you going to get the game on PC? Let us know your thoughts in the comments section below. Do you want to read another review? Have a look at our Corpse Party 2 review.

A big thanks to Roofkat for providing this game to Review

A fun and interesting retro arcade game with a surprisingly exciting storyline. 4-player co-op and a unique one-handed control scheme makes this an interesting but flawed experience.

The Best Shooter Games for Xbox