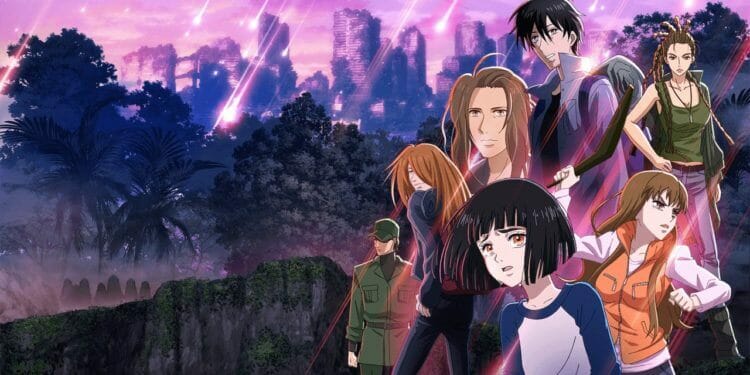 The official 7 SEEDS manga website revealed the anime’s second season would be arriving March 26th on Netflix, introducing a key visual alongside the news. For those unfamiliar with 7 SEEDS, it is an anime set in a post-apocalyptic setting where a group of survivors serves as humanity’s last hope to rebuild the population.

Netflix’s official synopsis is as follows:

In the immediate future, a giant meteorite has collided with earth. All living organisms, including mankind, have been wiped off the face of the planet. The government, who had foreseen this outcome, took measures to counter the worst-case scenario called Project 7 SEEDS, in which five sets of seven young men and women were carefully selected and placed into teams. Each participant sought ways to survive on a deserted island.

The YouTube channel for 7 SEEDS also began streaming a promotional video for its second season earlier this week, along with a new key visual seen above. The first season of 7 SEEDS aired on Netflix June 28th, 2019, and on Television in Japan on January 14th. The series is being directed by Yukio Takahashi.

7 SEEDS is an interesting anime about survival it depicts what humans can do given a certain situation. The first season was great, and I can’t wait to see how well the second season does. Those interested can check out the first season for themselves here.

Have you seen 7 SEEDS? Are you interested in checking out the second season? Let us know your thoughts in the comments section below.

Despite the Coronavirus Outbreak, The Gaming Industry’s “A Safe Haven”