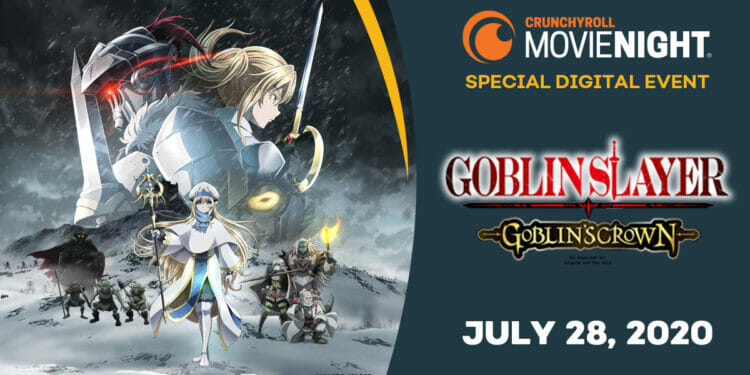 Crunchyroll announced today that the new anime film Goblin Slayer -Goblin’s Crown- will be available on the platform starting July 28.

In celebration of the launch, Crunchyroll will be giving away a free digital poster to anyone who watches the movie within the first two weeks (July 28 – August 11) of it being on Crunchyroll. The poster will be signed by the Director Ozaki-san (who previously worked on Cowboy Bebop and Persona 5: The Animation) and Author Kumo Kagyu. A synopsis for the film is provided below:

“Please find any information on the Noble Fencer that disappeared after leaving to slay some goblins.”

Goblin Slayer and his party head up to the snowy mountains in the north after receiving that request from the Sword Maiden. A small village gets attacked, they encounter a mysterious chapel, and something about how these goblins are acting bothers the Goblin slayer.

“I’m going to take back everything that I’ve lost!” In order to save the captured Noble Fencer, the Goblin Slayer and his party head to an ancient fortress covered in snow to face off with a powerful foe and a horde of goblins!

Crunchyroll also previously released theatrical premieres of Konosuba -God’s blessing on this wonderful world!- Legend of Crimson, Saga of Tanya the Evil – the Movie, Mob Psycho 100 II and the Yuri!!! on ICE marathon event to the Crunchyroll community across the country.

Have you seen the Goblin Slayer anime? Are you excited for the film? Let us know your thoughts in the comments section below.