Second verse, different from the first

(Author’s Note: For ease of access purposes, each game reviewed is the version(s) present in the Mega Man X Legacy Collection 1 and 2 games.)

Taking place six months after the events of the first game, Mega Man X has destroyed Sigma. However, the Mavericks themselves have not been completely destroyed, and a group of them has been found in an abandoned production factory. X leads the Maverick Hunters there, and he finds that this new Maverick force is known as the X-Hunters. These events lead to the new Mavericks he has to fight over the course of the game.

Another noticeable point about the events of this game is that Zero is currently missing. (For those who haven’t read our Mega Man X review, he sacrifices himself in one of the Sigma Stages in the last game.) More on that situation later, though. 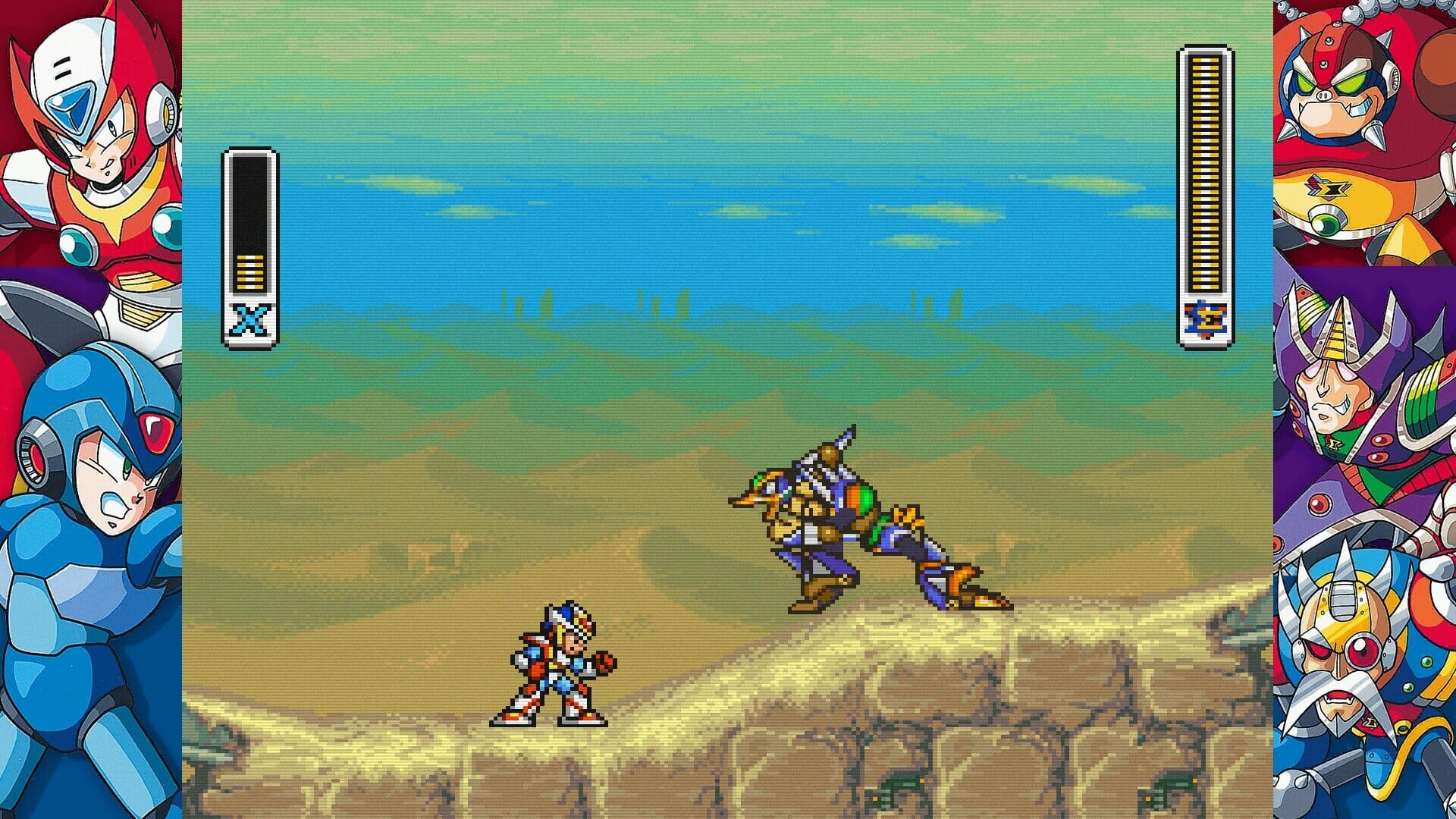 Updates in Comparison to The Original

The controls of Mega Man X largely transfer over to its sequel, with a very notable change. To summarize, the dash has been changed to be naturally available without upgrades. Previously, this upgrade was locked behind the Legs Upgrade, which was obtained early on. This means that players can be jumping and zooming around right out the gate.

The tight platforming controls of the last game also return, and they’re as good as they were before. This makes the stages very entertaining to navigate and jump through. The stages themselves all have the same general objective as the last. You make your way to the end of the level and defeat the boss. The music is also very good, however not as great as the original. 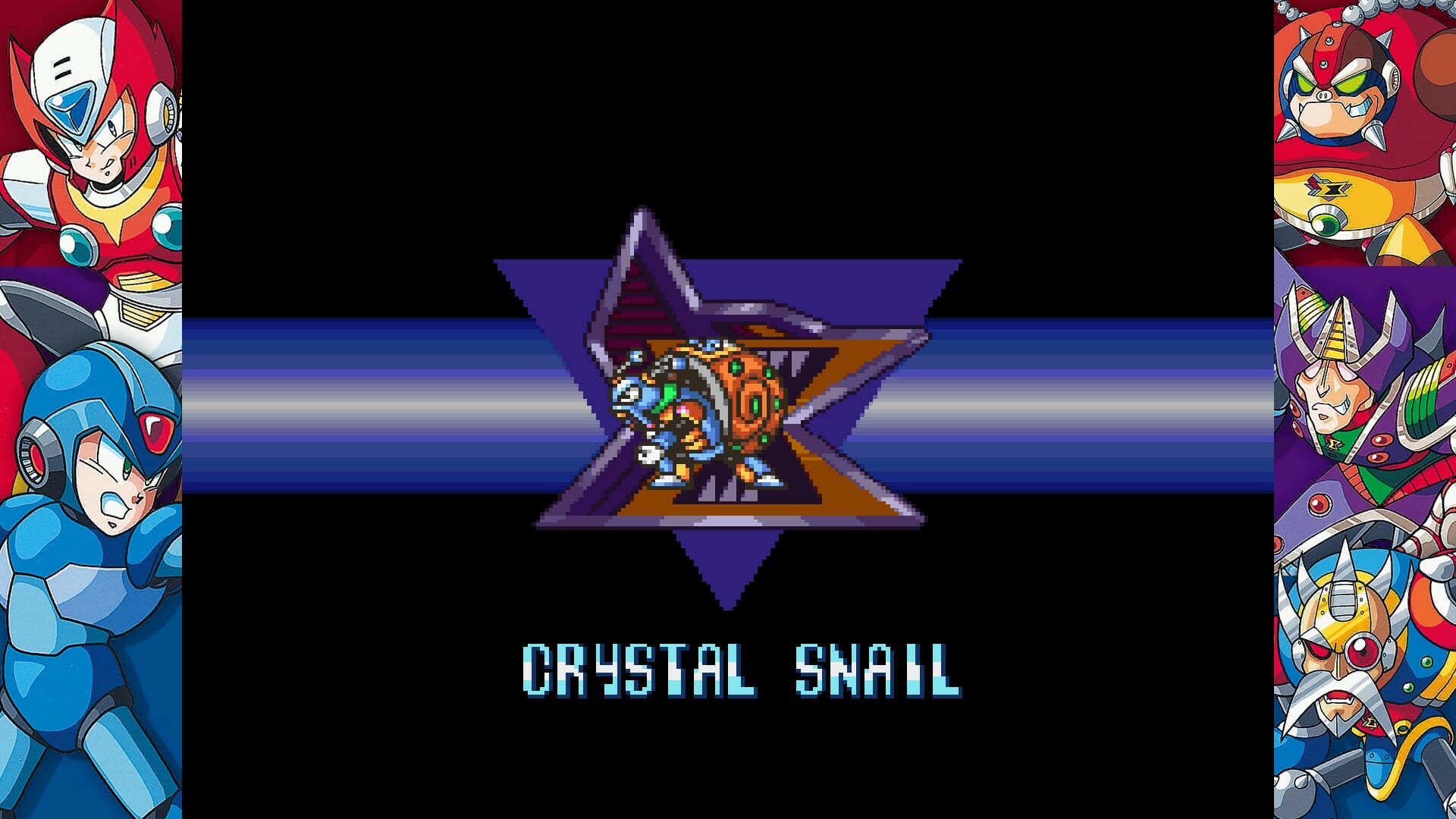 A Brief Sidenote About The Version Choice

Mega Man X2 was one of several games to receive an enhancement chip in its cartridges. Games such as Star Fox had a chip like this, known as the Super FX chip. Mega Man X2 (and its sequel, X3) have a chip known as the CX4 chip, developed by Capcom.

This chip was known at the time for its role in mapping and transforming wireframes in X2 and X3. This can be seen on the title screen and a few of the bosses in some levels. This mapping gives bosses a pseudo-3D look, which was impressive for a console like the SNES, and also at the time of release (being 1994).

As cool as it would have been to play the game on original hardware, that’s unfortunately not possible. Mega Man X2 and X3 are not available for a reasonable price, and are not on the Super Nintendo Classic. Original hardware copies are significantly more expensive, breaking the $100-mark on online stores. If you would like to avoid that, just buy Mega Man X Legacy Collection on your preferred platform. 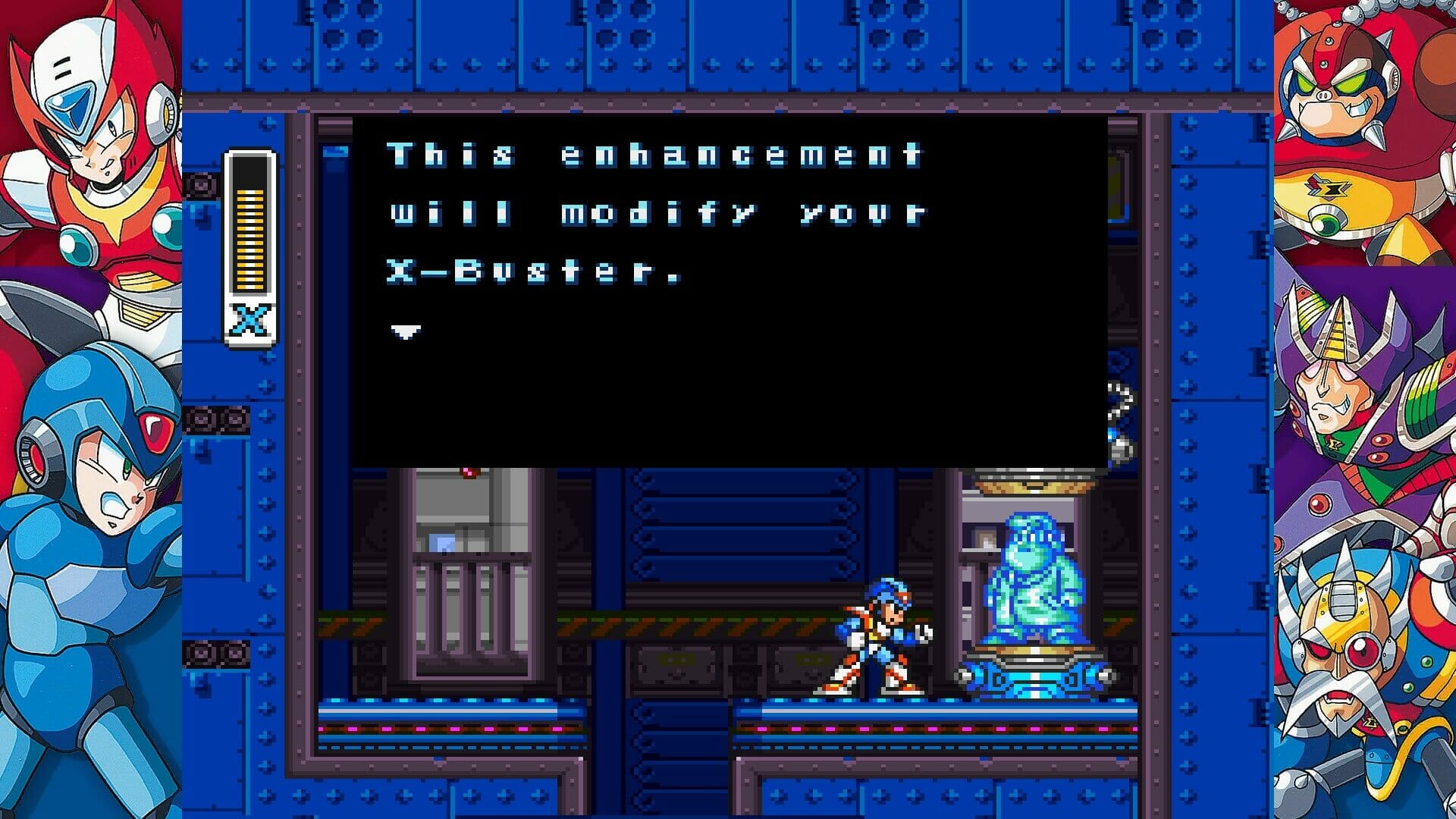 Mega Man X2 has the same secrets that the player could uncover in the first game. Collectible items in the world include heart tanks, sub tanks, and most importantly, armor. This game’s armor has four parts, located in four different stages.

The Head armor, found in Crystal Snail’s stage, is a quick and easy part to acquire. Located after the sub-boss in the respective stage, obtaining this part unlocks the Item Tracer. This puts a cursor onscreen, revealing hidden passages and items. An oddity is that while it has unlimited uses, it has its own ammo gauge (potentially a developer oversight).

The Body armor is located in Morph Moth’s stage. It cannot be obtained in the first playthrough of the level, as the player needs Wheel Gator’s weapon (Spin Wheel). After walking in the building near the start of the level, the player uses the weapon to cut a section of the floor. This reveals a hidden passage, which has the Body armor.

Obtaining this part allows access to two perks; all damage he takes from that point on is reduced by half, and X gains access to the Giga Crush. The way Giga Crush is, X must take damage to charge it. After it’s fully charged, X can activate it to perform a screen-filling attack, damaging everything onscreen.

The Legs part, located in Overdrive Ostrich’s stage requires the Spin Wheel (mentioned earlier). This part simply requires a dash jump to reach a ledge above the last hallway, that goes into the missile room. After getting up there, the player has to use the Spin Wheel to destroy the blocks in the way. Obtaining the Legs part allows the player to perform an aerial dash, but cannot be done from a dash jump.

The Arm part (pictured above) has several methods of getting to it. In Wheel Gator’s stage, inside the first vertical passage upon entering the tank, there’s an out-of-reach wall overhead. Players have multiple methods to get there, and a few that I’ve found are:

Obtaining the Arm part allows X to have an additional charge level for his X-Buster, unlocking two features. The first allows him to fire two Charge Shots in quick succession. In addition, it also allows the player to charge their sub-weapons, unlocking additional functions for them. 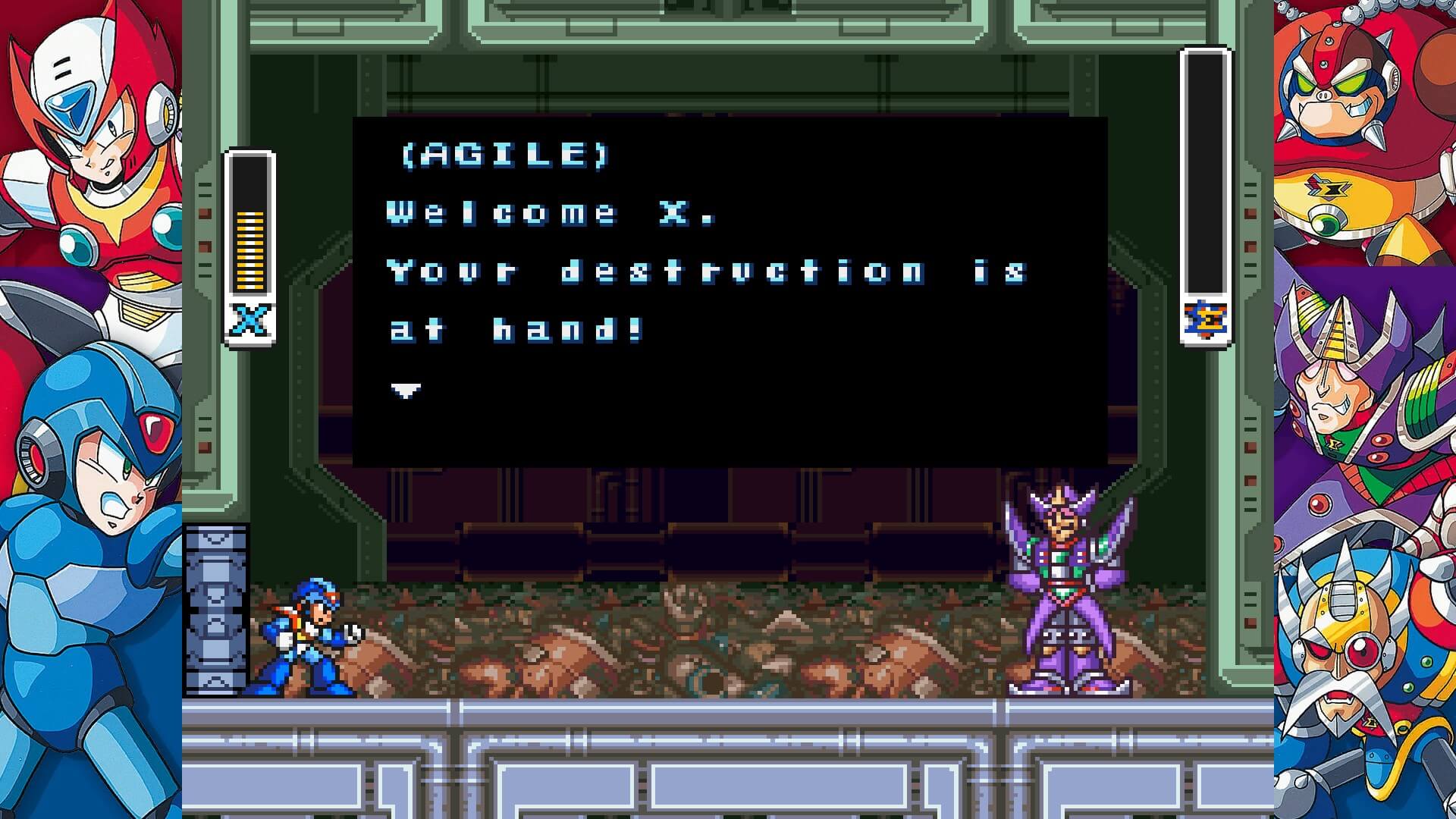 The X-Hunters are another key aspect of the progression of Mega Man X2. These three sub-bosses start appearing after completing two of the main game stages, and appear at randomly chosen stages. You can opt to fight them and can recover a part of Zero (who was destroyed in the last game). Each boss drops one part upon defeat. After clearing a stage and defeating one, their rotation changes for who’s left.

There is a benefit to going out of your way to hunt them down. Doing this gets rid of a potential optional boss in the last stage of the game (a mind-controlled Zero). Each of the three bosses has their own weaknesses and presents a decision to the player. They can choose to go after them early, or fight an extra boss at the end of the game.

However, don’t be waiting around for too long. If there’re only two Mavericks left, the X-Hunters completely disappear from the rest of the game. The Zero parts you haven’t obtained disappear with them. As a consequence, the optional boss fight against Zero is added to the final stage of the game.

The presence of the X-Hunters adds a layer of strategy to your playthrough. Their random nature makes you have to choose, creating a layer of pros and cons, which is welcome, for sure. 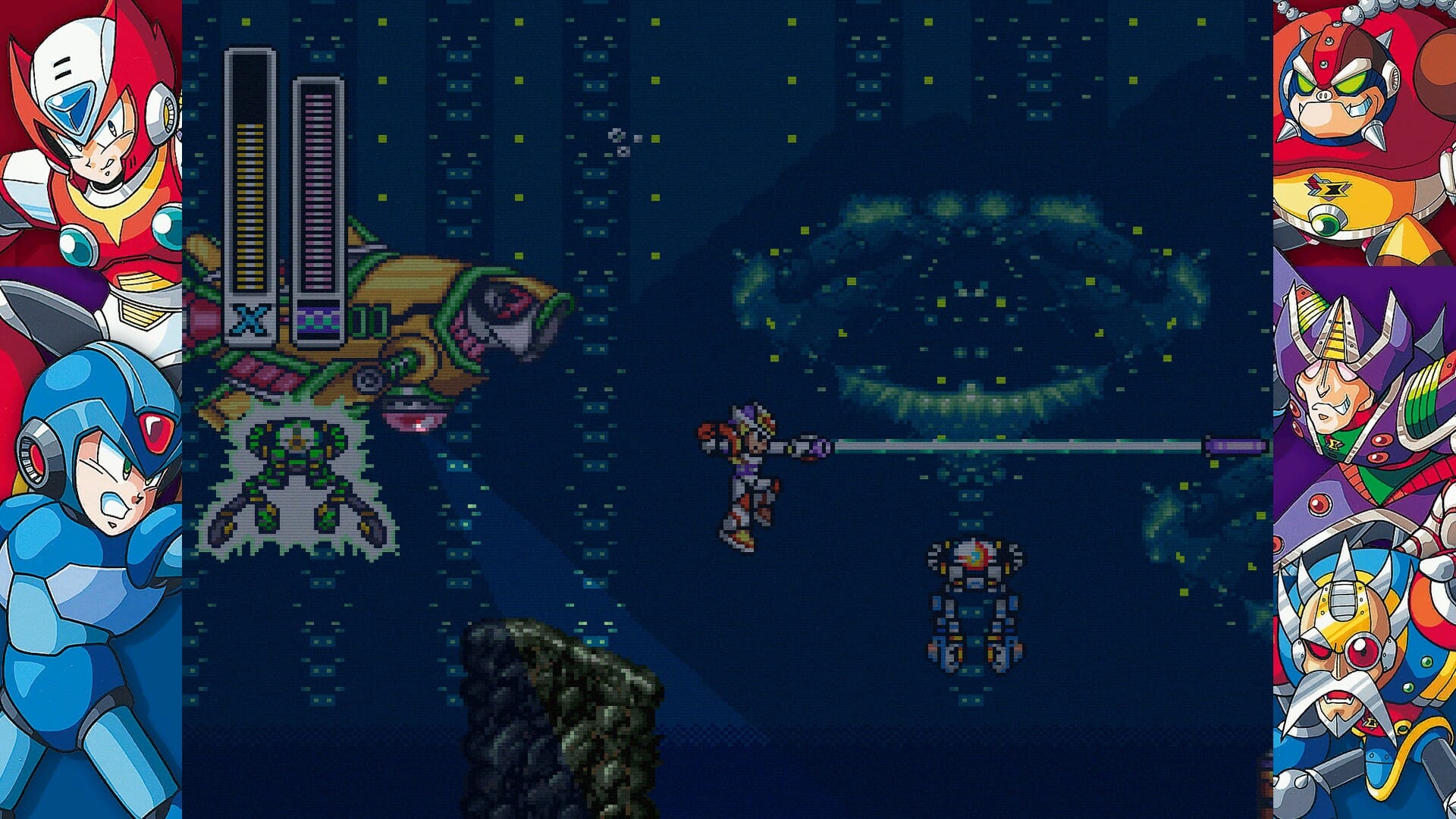 The Sub-Weapons Aren’t As Good

While the general ideas of a traditional Mega Man game remain intact (fight the eight bosses, get through the multi-stage final level to beat the game), the eight bosses this time around kind of don’t do it that much. The Sub-Weapons, while nice later, don’t really do much aside from killing bosses easily and getting upgrades.

This kind of sucks, because the Sub-Weapons of the last game all had their own unique purposes, but for this game, they’ve been relegated to boss killers and little more aside from the two previously described. It makes them feel wholly pointless save for the bosses, which isn’t great of a point when the topic of a Mega Man X2 review is on the table. 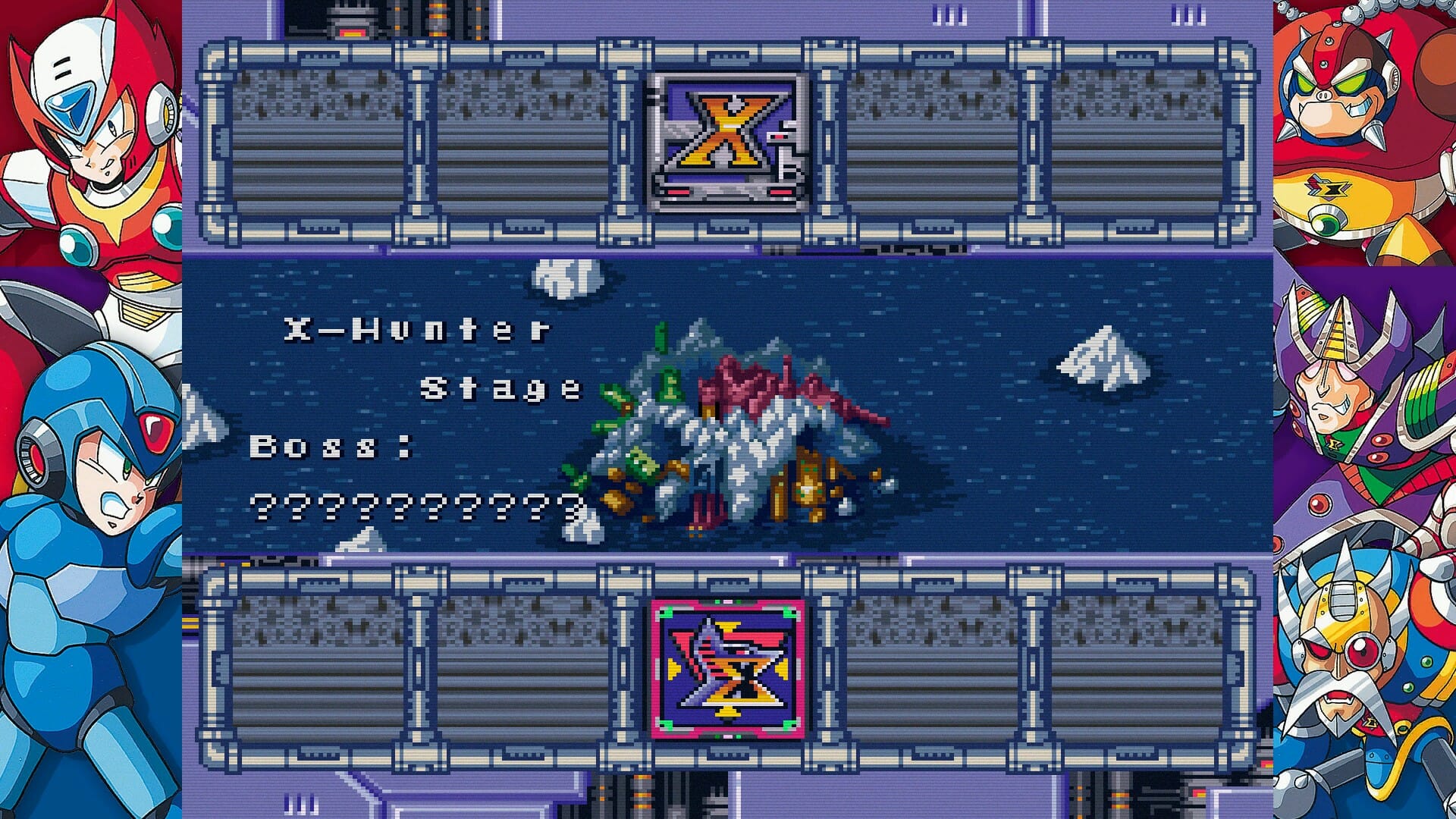 After defeating the eight main bosses, the X-Hunter Base opens up, and the player can access the end of the game (which is par for the course when it comes to Mega Man titles). Difficult platforming, hard-to-kill sub-bosses, rooms packed to the gills with enemies, it’s all there.

At the end of each of the X-Hunter stages, you fight one of the X-Hunters again, and after completing those three stages, the last two stages of the game open up, as Sigma takes center stage again (his stage icon shown above). Here, you fight all eight of the original bosses, and then, you go to another stage and fight Zero (if you didn’t defeat the X-Hunters in the eight main stages). If you did, Sigma reappears with a black-armored Zero (which would be a cheat code in later games). 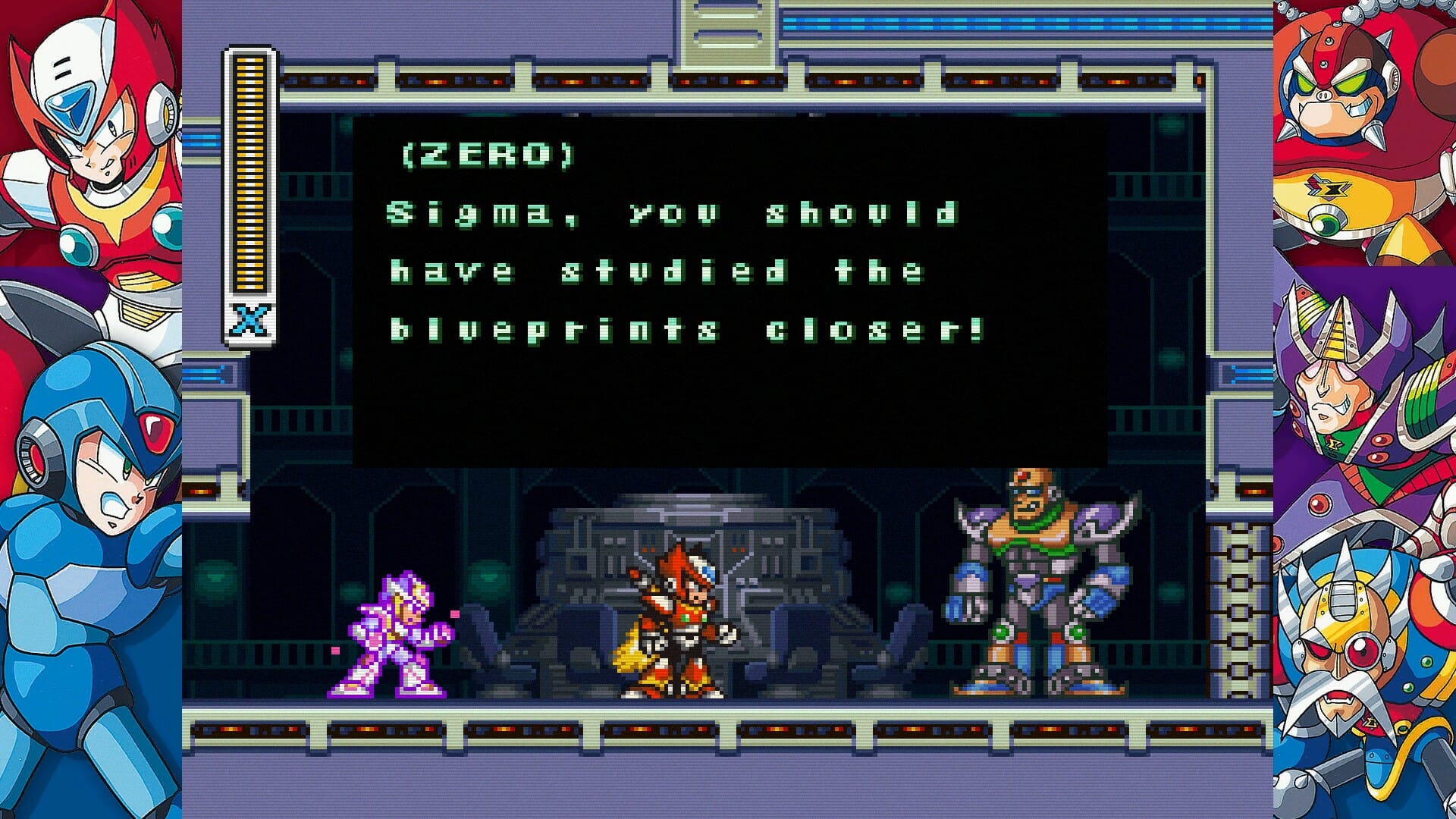 The real Zero would quickly cut down the fake, and sends you on your way to destroy Sigma. Here, players are tasked with defeating Sigma in another difficult boss battle, and when all is said and done, he revives as the Sigma Virus. Signified by a wireframe head, Sigma then battles the player again, his color changing with how much damage he’s taken.

Now, this next piece was missed in our initial Mega Man X review, but players of that game, if they sat through the credits, would learn that the first version was merely a temporary body for Sigma. His true form is the Sigma Virus, which is what the second boss is. After destroying the virus’s manifestation, Sigma reveals that Zero is “the last of the Doctor’s creations,” a point later explored in future games.

Mega Man X2 has its own bits and pieces of fun as little upgrades to the experience that the original left behind. The armor in this game quite frankly outclasses the last game’s armor, but falls flat in the sub-weapons department. X1 has better music, but X2 is brighter and clearer in a lot of cases, and the CX4 hardware makes boss fights look great while trying something new for the time.

This and the original Mega Man X serve as a great duology to introduce players to the series, and while the last stage can be a little more tedious than the first game, but can be mitigated somewhat. A great companion to the original in almost every way.

Next time, we’ll look at Mega Man X3 and how it stacks up to the first two titles. If you haven’t done so already, you can read our Mega Man X review here.

What did you think of our Mega Man X2 review? Did you like it? Are there points that you agree with or disagree with? Let us know your thoughts in the comments section below.

Mega Man X2 is what a sequel should be, giving a new challenge and features while retaining the core of what the first left behind.