Crystar is yet another title from Furyu and NIS America with a unique aesthetic but a basic premise. And while the game has a lot of well-crafted elements, some aspects fail to live up to the rest. 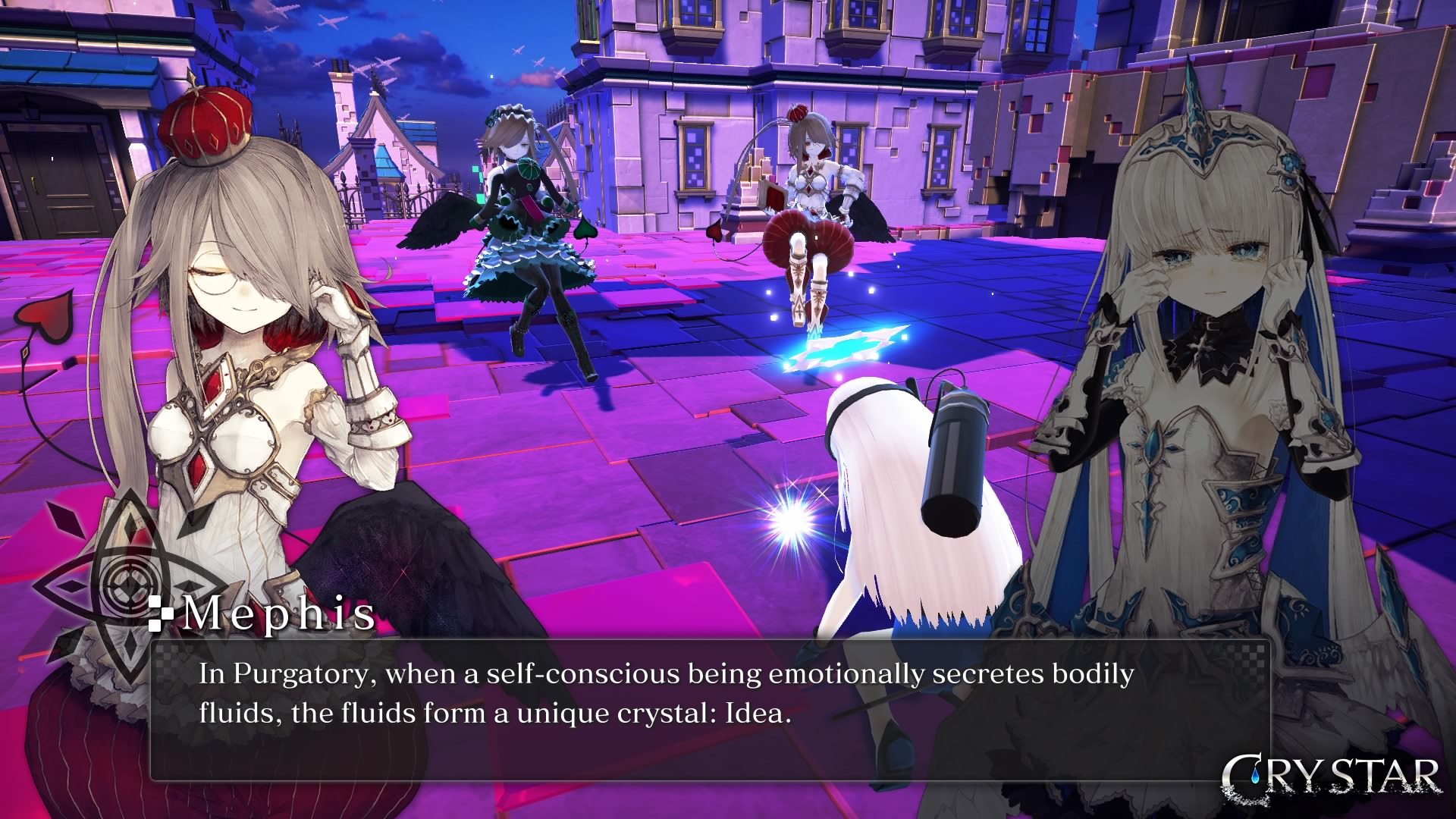 The game follows a random teenage girl named Rei, who wakes up one day to find herself in a mysterious realm as a butterfly along with her sister Mirai. Turns out she and her sister were transported to this world by a malicious and mysterious revenant princess, and to make matters worse, her sister gets separated from her after a series of more confusing and unfortunate events. She then meets two younger girls who introduce themselves as the overseers of Purgatory and tasks Rei to defeat Revenants to get her sister back.

While the game’s story is in many ways typical to its genre, I do appreciate how many mysteries it presents that give the player a reason to keep playing. However, this element may just be as much of a negative as it is a positive as a lot of essential plot points are also left up in the air and are explained much later when it doesn’t matter. Another aspect of the storytelling I enjoyed is the characters which thankfully prevent the game from being too dull. Each character has their own distinct personality, albeit a bit tropey. Rei is also a good protagonist. She often points out the bitterness of specific plot points or the peculiar nature of characters around her as naturally and as often as any real-life person would. However, I’d like to note that I wasn’t a fan of the English dub, as many scenes with Rei especially sounded a tad too dramatic or overacted. 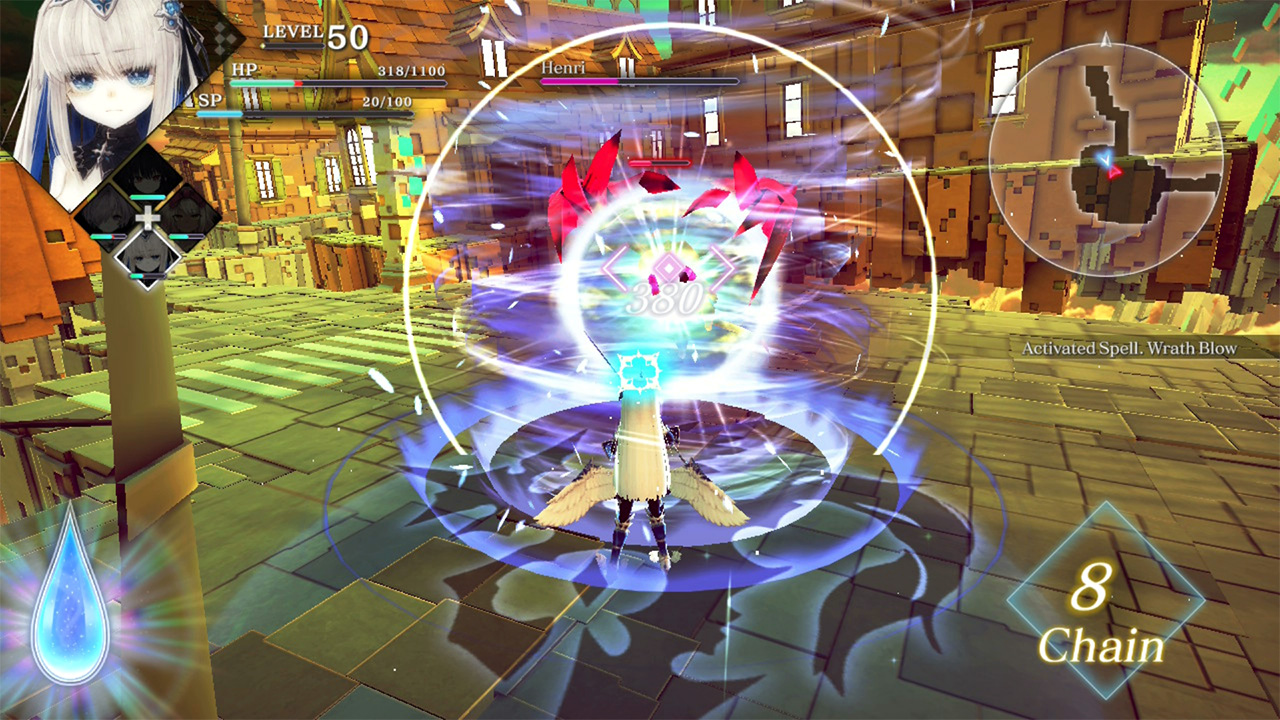 Gameplay-wise, Crystar exhibits smooth but weighty real-time combat. The upgrade and skills system is done through the Torment and Sentiment mechanic, which has Rei purify the “Torment” feelings she is plagued with during battles which grants her “Sentiment” upgrades which range from increasing your Attack power and overall health to providing new combat skills you can use during battles. Outside this system, players can also rely on their Persona-like guardians, which they call upon for a limited time once a bar on the button corner of the screen fills up, which is primarily useful because many bosses and enemies are incredibly tanky.

And speaking of enemies and bosses, many enemies in each section or level are more or less the same as the models are reused multiple times with different sizes and colors, often being the attributes that differentiate them. And while the bosses have unique designs and are fascinating to fight, they’re unfortunately often plagued with limited repeated actions and dull, predictable motions and attacks.

Crystar’s visuals are by far the most captivating and impressive aspect of the game. The models especially encapsulate the very fragile femininity of the leads, chiefly seen through their elegant dresses and the “pretty” appearance. However, the game’s level design impressed me the most, which presents a unique, cosmic, and otherworldly aesthetic not seen in many games. These environments also weirdly blend an interior setting with external settings, enhancing the game’s unique aesthetic. 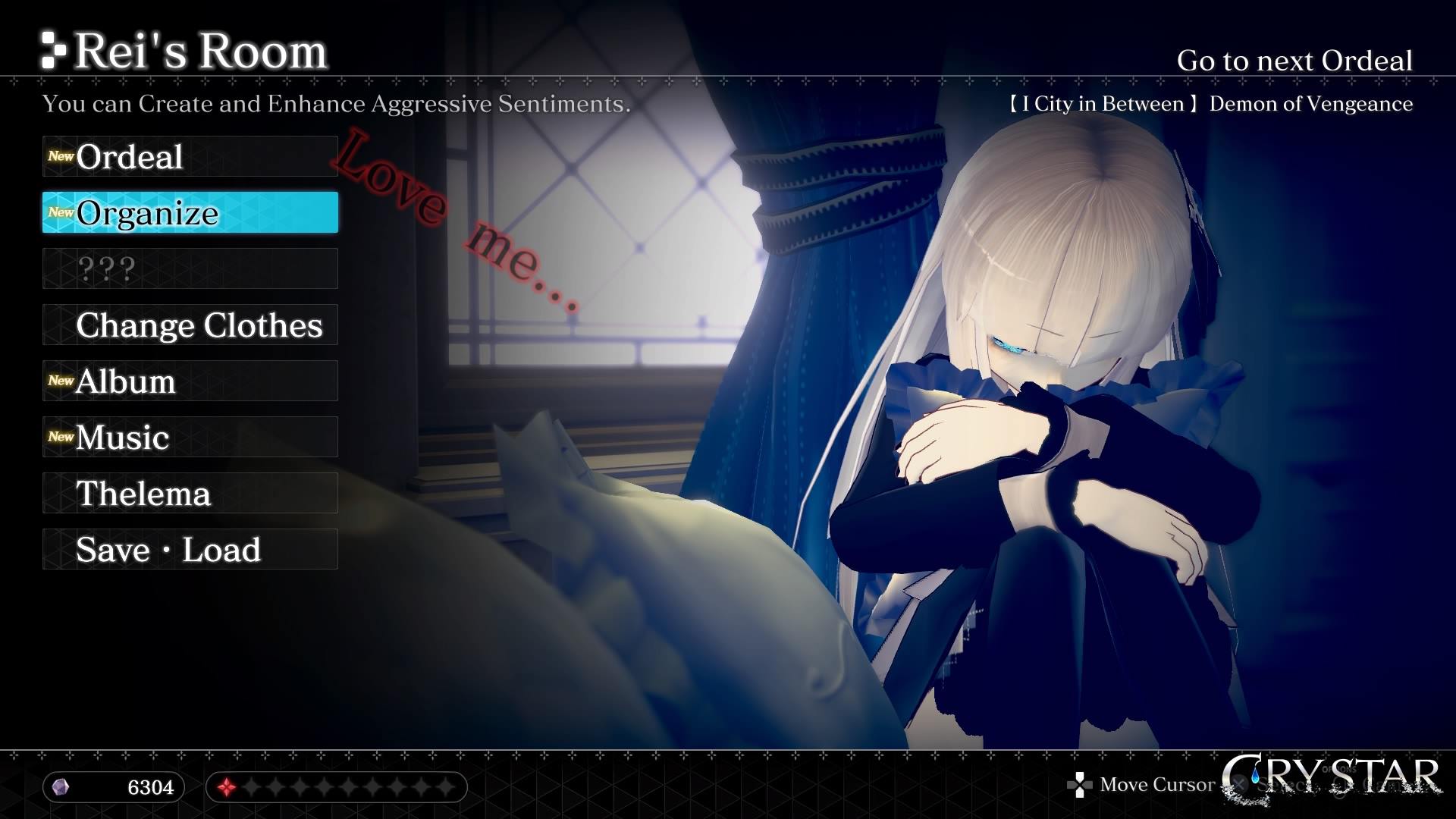 In conclusion, while Crystar’s combat is not as intricate or as in-depth as other JRPGs, and the plot is quite derivative of those same JRPGs, its visuals and entertaining characters just about make up for it in terms of overall entertainment.

Are you a JRPG fan? What do you think of our review? Let us know your thoughts in the comments section below.

While Crystar's combat is not as intricate or as in-depth as other JRPGs, and the plot is quite derivative of those same JRPGs, its visuals and entertaining characters just about make up for it in terms of overall entertainment.

The Legend of Heroes: Trails From Zero PC Review – Newswords

[…] over a decade of being unavailable in the west, the turn-based JRPG The Legend of Heroes: Trails From Zero has finally received an English localization from NIS […]