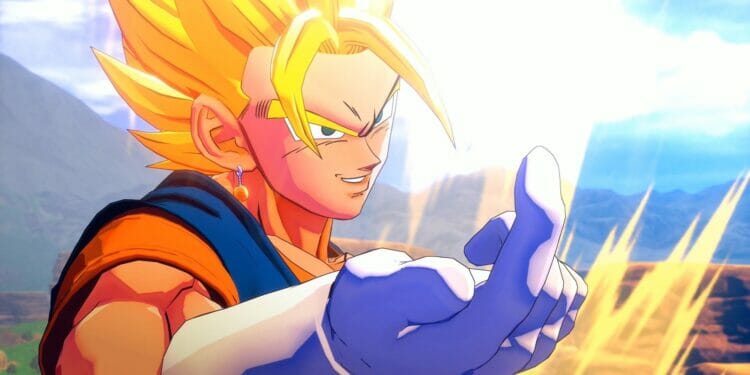 Dragon Ball Z Kakarot’s had its own entire DLC life cycle after the game’s full release. The game’s DLC focuses on movies, such as Battle of Gods, and The History of Trunks. The game, for those not aware, covers the story of the series’s main character, Goku, and takes you on a journey through the events of Dragon Ball Z, in an action RPG-styled adventure. That said, its upcoming Switch version has a key major difference from its console brethren.

The Nintendo Switch version of Kakarot takes Vegito and Gotenks, two playable characters only in limited capacities at the end of the main story, and allows you to unlock them for free use by completing specific quests, There’s also a new trailer to go with it, which you can watch below.

The A New Power Awakens set will be included with new copies of Dragon Ball Z Kakarot on Nintendo Switch, and there’s multiple ways you can purchase it. The base game will include the game and the first two DLCs, which are postgame stories based upon Dragon Ball Z: Battle of Gods and Resurrection F, two of the series’ many movies. The Deluxe version will include these and the third DLC, -Trunks- The Warrior of Hope, along with some in-game consumables.

The Ultimate Edition has a pillar themed after Tao Pai Pai from Dragon Ball, a music pack containing 11 alternate themes, and all of the previously mentioned content. A small anecdote in the bottom left at the beginning of the trailer also discloses that these updates will be coming to other consoles at a later date, so PlayStation 4, Xbox One, and PC users aren’t being left out entirely.

Dragon Ball Z: Kakarot + A New Power Awakens will be available on Nintendo Switch on September 24th, 2021. The regular game is also available on PlayStation 4, Xbox One, and PC via Steam.

What do you think about the upcoming Dragon Ball Z Kakarot + A New Power Awakens updates? Do you play the game on currently released platforms? Are you waiting for the Nintendo Switch version? Let us know your thoughts in the comments section below.