Skydiving dragon murder has never been so accessible 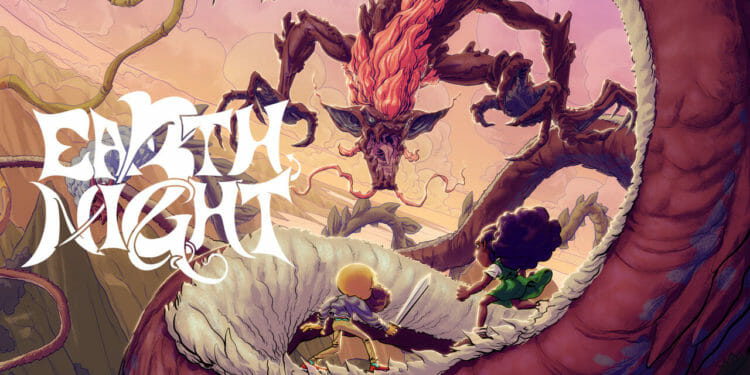 Historically, “runner” games have not been a genre I’ve given much time. I’ve always seen them as mobile games or as games involving very precise jump/slide timing and little else. If EarthNight was one of those games, I probably wouldn’t review it at all. However, while it does possess some qualities of a “runner” game, it does more to become an interesting title. 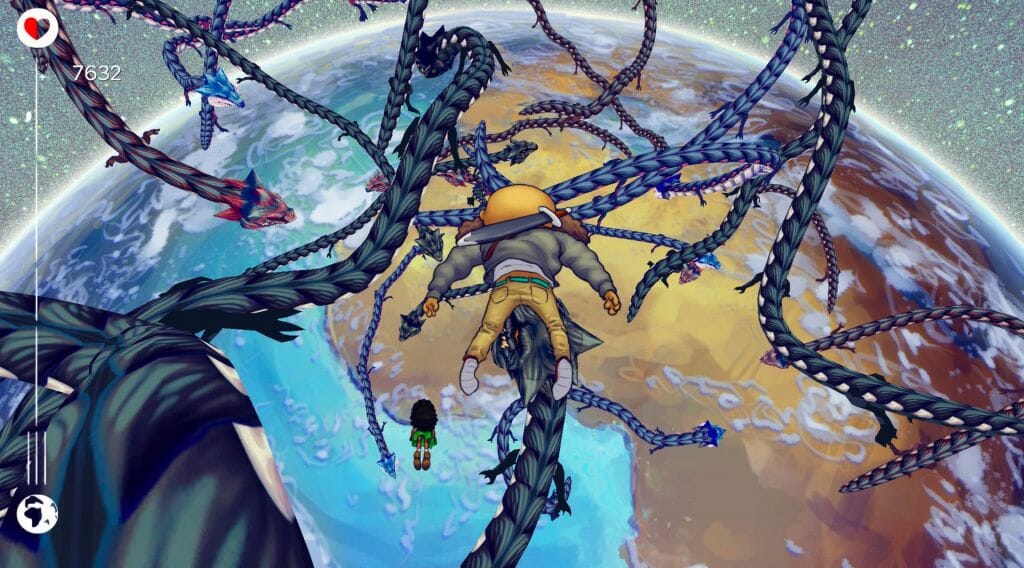 What the hell is happening?

The strange premise of EarthNight is that dragons have taken over the Earth. These dragons don’t seem particularly violent in the initial cutscene, but it appears that people are pretty unhappy about their existence. So in response, you take the role of either Syd or Stan as they attempt to rid the world of this flying menace.

That doesn’t explain what is happening in the gameplay, though, because it’s stranger still. Once you select a character, you leap out the door of your spaceship and dive onto the backs of one of the dragons. Then you run along its back jumping on and over various enemies as you push ever to the right of your screen. On the way, you collect mountains of random junk that becomes your currency.

Once you make your way to the head of the dragon, you unceremoniously leap onto and stab the sweet hell out of it. This action is a little unexpected given the rest of the design, but it’s in there. This mechanic is a bit of a minigame itself as different types of dragons require specific stabbing methods and patterns.

It can be a little hard to grasp at first but becomes easier as you go. Whether you successfully kill the dragon or not, you continue your dive downward until you beat the game or die in the process. 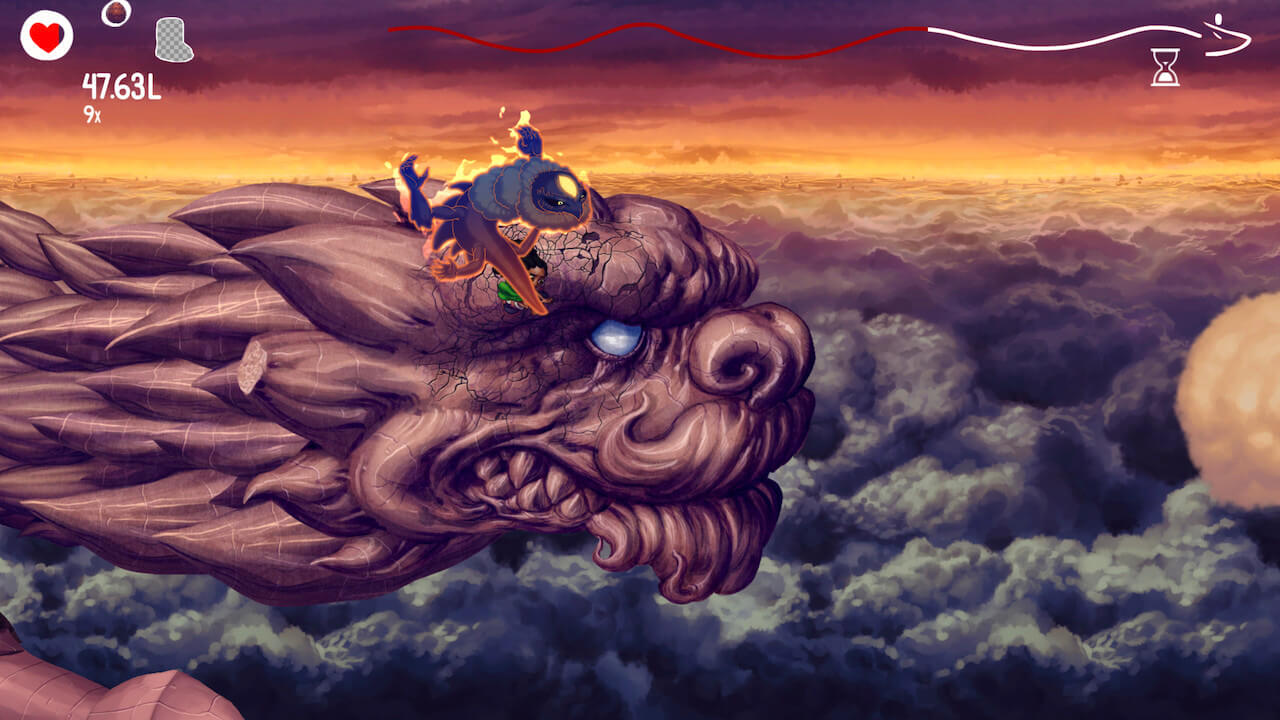 EarthNight is a very colorful and vibrant game throughout. The dragons distinguish themselves by their color and appearance, but the many enemies on their backs are also a menagerie of odd colorful monsters. Silly animations give life to the hand-drawn art style and make every new enemy you encounter a treat. Of course, you can’t linger too long because they’ll totally kill you.

The quality of the visual design extends to the mountains of items you pick up. These random trinkets and junk, once collected, are turned into water at your ship. This water is what you use to unlock the various pickups in-game as well as for upgrades. Progression in this system comes quickly, but because it involves actually picking up the items, it doesn’t automatically make the game easier.  Yet, missing an item you need can mean the difference in winning or losing a run.

The further down you go in the Earth’s atmosphere, the stranger the creatures on the backs of the dragons get. They are often larger and become unavoidable without quick reactions or buffs from pickups. The pickups you unlock ultimately become a requirement if you want to survive, even if you’re exceptionally nimble. There’s just too much on-screen to dodge and it starts to feel like a traffic jam. 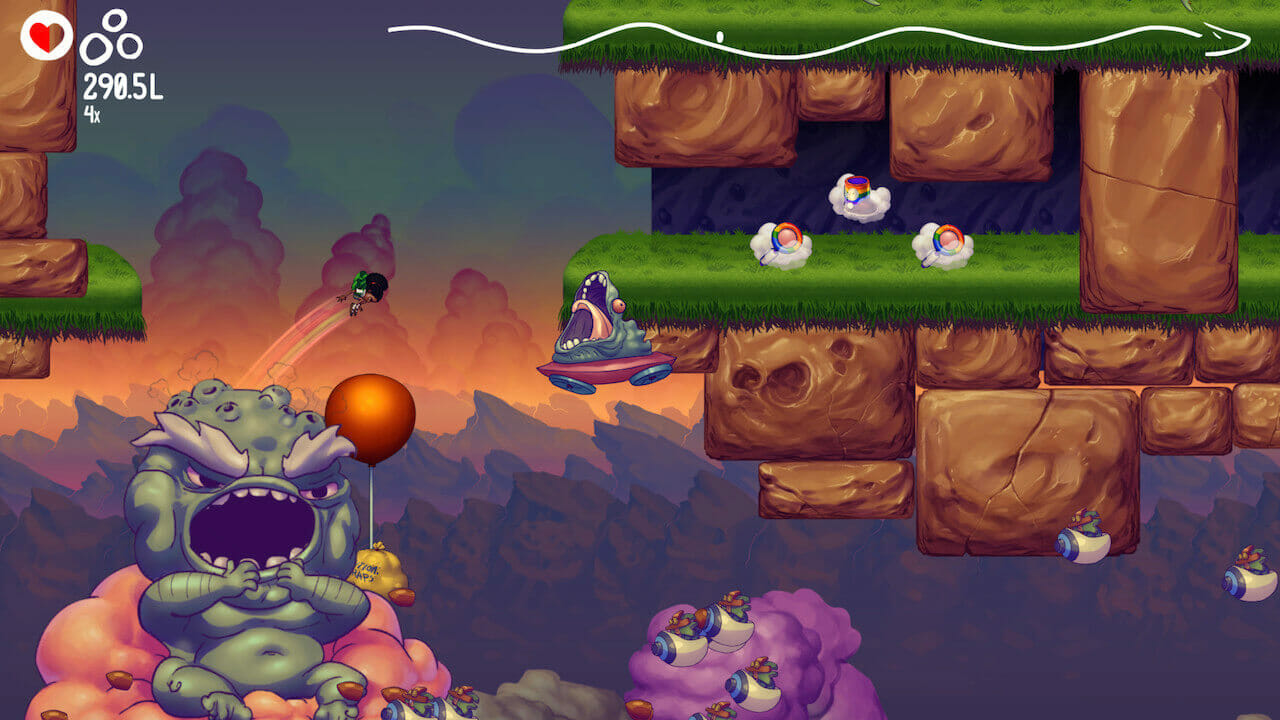 Sky Dragons in Flight, Is It a Delight?

Despite my general avoidance of “runner” games, I found some fun in EarthNight. I think it was the fact that you still have some lateral movement available. Rather than always running at a fixed speed, you can speed up or slow down a bit and your speed changes with how effective you are at jumping on enemies.

That made it feel more like a typical platformer, and it worked for me. Though I was still frustrated when I’d miss a pickup by an inch without the ability to go back.

EarthNight also features some decent chiptune-style music. Even just on the menu, I was surprised at how catchy it was. All across the board, the game feels like it’s comprised of quality parts. The combination of fun visuals and at least a little of that “one more run” itch kept me interested in the game for a while too.

However, ultimately, I don’t think it’s the game for me. That doesn’t mean it’s not a good game, it’s clearly got everything going for it. I just don’t enjoy fighting so hard to find the rhythm in the movement. I would much rather have full control of my character in a platformer.

There are many fans of runner games out there, of that I am sure, and this game is definitely for them. It would be a shame if more people didn’t check it out. I had more fun with it than I assumed I would for being part of a genre that I’m not in to. Getting EarthNight on sale may be a smart choice if you’re unsure about it, because currently there is no available demo. At a low enough price, it’s worth it just to see all of the wild designs.

If you’d like to see more Indie game reviews, check out Ritual: Crown of Horns or Outworld Battlegrounds.

EarthNight is a sidescrolling platformer "runner" game that features vibrant creatures and environments for you to leap onto and over. The rich style of the game is visually appealing, but the gameplay lacks the substance necessary to hold interest for very long.