Are you tired of all those brooding protagonists with dark stories, dead families, and mistakes that cannot be forgiven? I feel you, and so do Inverge Studios. Their latest creation, Effie, is a light-hearted 3D puzzle-platformer that takes inspiration from the beloved titles of old, among which are Crash Bandicoot, Spyro, and The Legend of Zelda saga.

Effie sees us taking on the role of a young man Galand, whose youth was taken by a witch Melira. Naturally, Galand wants to return his youth and so he travels to an old temple, where Elder Protectors resign. These ancient beings watch over kind souls and so are able to lift the curse.

However, they are not sure whether Galand’s heart is kind and so they entrust him with the task – save Oblena from the evil reign of Melira. Only then will he be able to return what was taken from him. 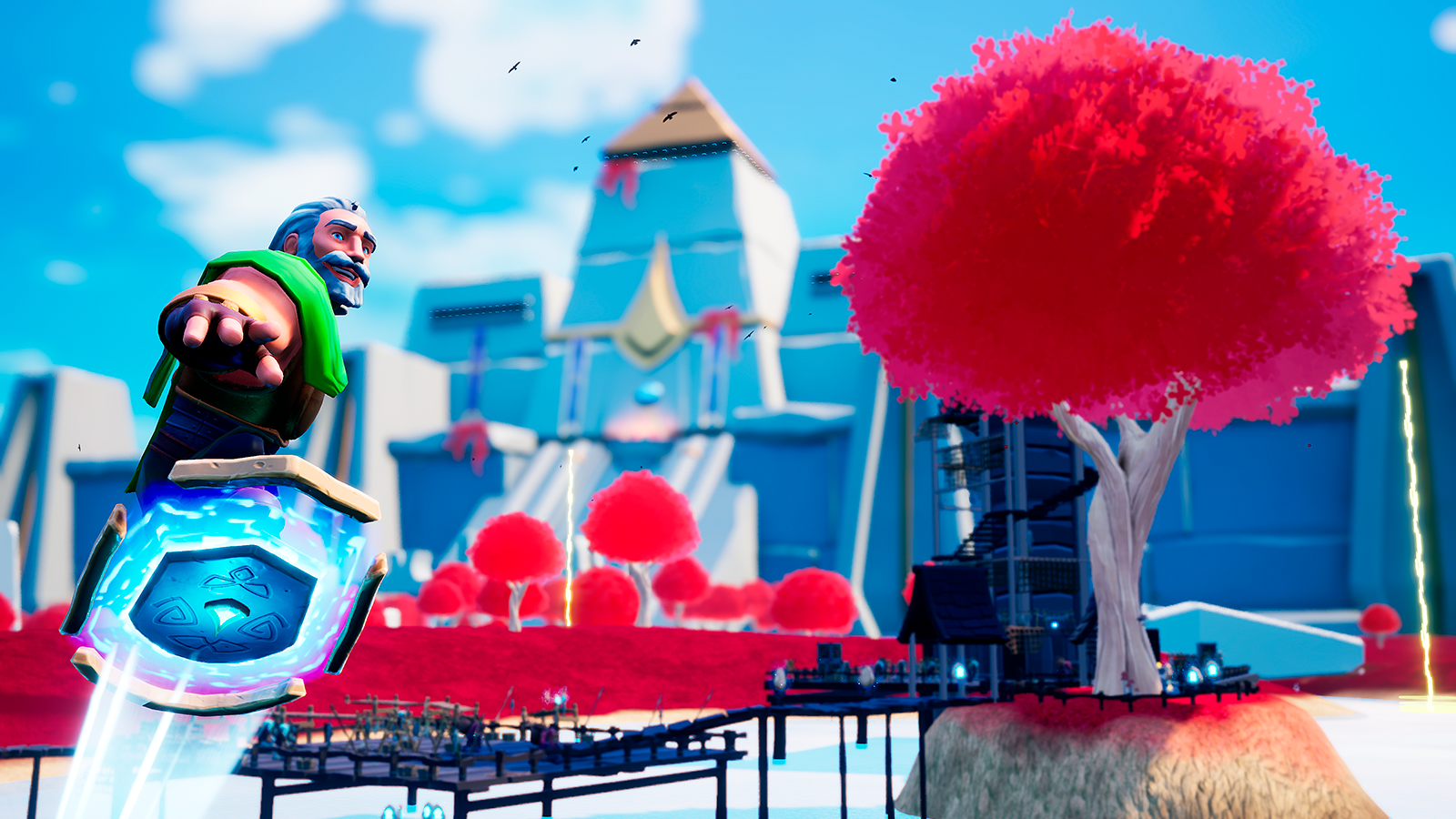 Unfortunately, this is where Effie struggles, in my opinion. You see, this whole story I just told you – it is a fairly lengthy cutscene, most of which is hand-drawn pictures. While it was nice to look at in the beginning, I felt quite bored by the end of it.

Moreover, before I even started the new game, I was thrown off by the “Press “A” or “Enter” to start”. I am not a noob, I swear, but it took me about 20 presses of “Enter” key to finally get to the main menu.

When I finally got there, I found that this game starts in a 1024×768 resolution. My screen has the 16:9 aspect ratio and so my cursor’s visual position did not correspond with its actual position in the game. This problem is fixable as well, but it still leaves a bitter taste.

Nevertheless, the game manages to redeem itself, as it nails the first in-game moments with great art-style and charming soundtrack. The controls are also polished to perfection. So, the start is kind of meh, but it gets better.

The whole temple area is a big tutorial, teaching you game’s base controls and mechanics. Here you learn how to move, where to climb, what to collect, and what to avoid. It is a great addition for newcomers and it does not overstay its welcome, as not to bore the veteran gamers.

Later on, you find Runestone, the shield that will be your trusty companion for the rest of the game. At this point, you are also introduced to fairly simplistic combat. It consists of light attacks, heavy attacks, and block. They can all be chained. Block consumes energy that regenerates automatically. 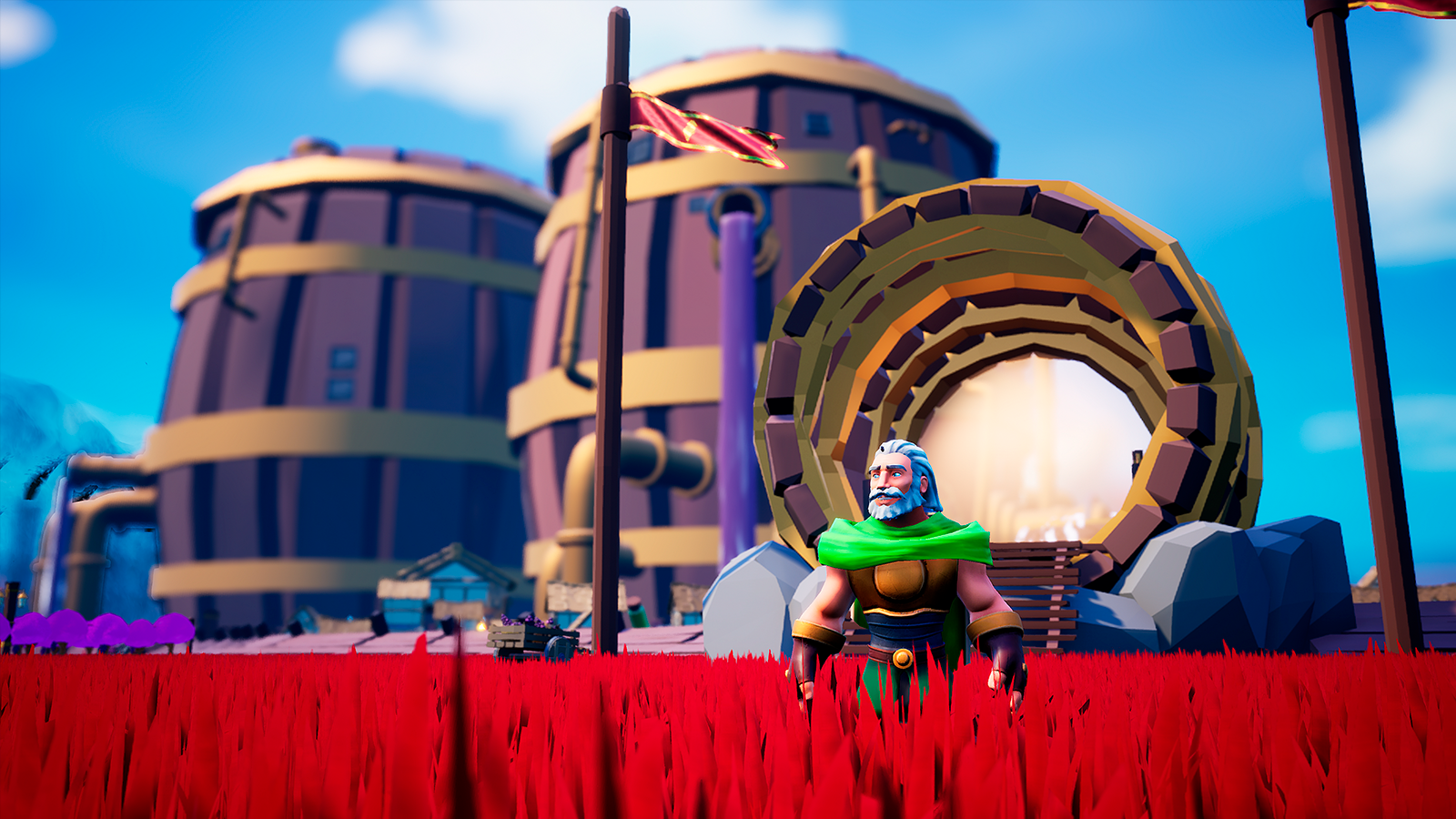 A few moments later you are thrown off into the beautiful open world. To navigate, Galand uses his shield like a surfboard. You can also gather yellow circles, visible from far away, to speed up. The open-world has 3 main locations, a plethora of side locations, and a final-boss location.

At the beginning of the main locations, you will unlock new abilities for your shield: dash, earthquake, and boomerang. All of them use some amount of energy and can be used offensively, but dash also has utility. It can be used while jumping or double-jumping to create “long jumps”, as the game calls them.

I honestly found dash to be the most necessary ability of the three. I was using it not only in combat and in specific puzzles, but all the time to navigate faster. Earthquake felt fun to use at the beginning, and boomerang felt lackluster. Ultimately, using abilities did not add much to your combat efficiency but if felt fun mashing buttons… 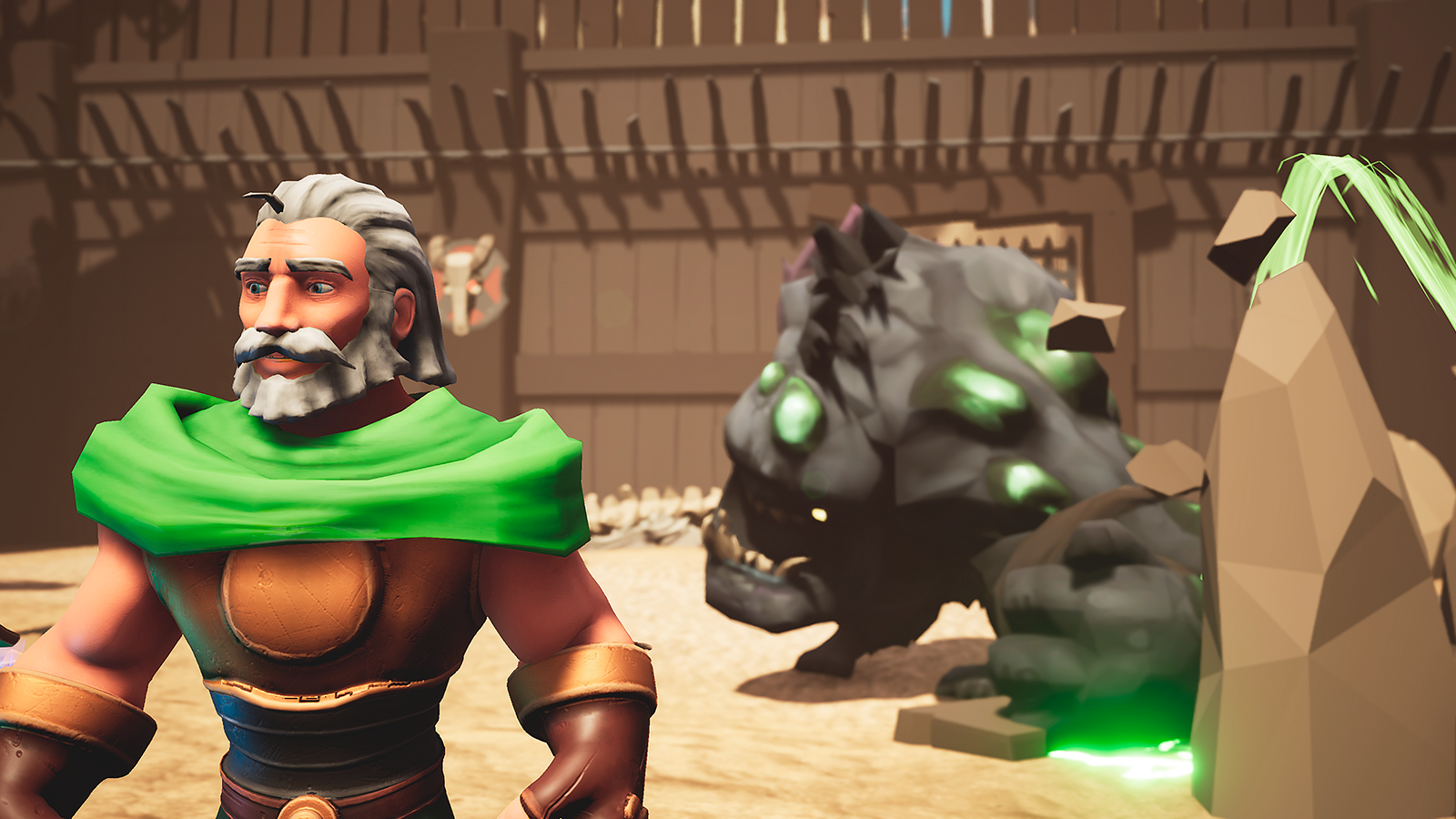 … for the first half of the game. At about the third chapter, I felt quite exhausted of combat. It really broke the pace of the game and started to feel mundane, as there were no new enemies introduced and no challenge involved. Some enemies had interesting mechanics but the damage they deal was negligible and had no other effects, so dodging them felt like a waste of time.

What was even worse at this point is that each time enemies would spawn, the narrator would comment on it, saying something like “An ambush! It was time to fight again”. There were only two phrases recorded for these occasions and it felt mind-numbing to hear them time and time again.

When I got to the final boss, I was terribly exhausted of the narrator and Melira, who only had one attack and one voice-line for it. I was delighted to finish the game. The end of the story felt satisfying. But then something happened. Something that left a bitter taste in my mouth and why I am very angry at this game.

After watching the final credits, I was unable to return to the main menu. I clicked as many times as my patience allowed me and could not get it to work. I reloaded the game and on clicking “continue”, I was thrown to the final battle again – which I could not bear to redo.

After reading all of this, you must be thinking “Wow, Effie really sucks”. The reality is that, no, it doesn’t. It is a great game and I had a lot of fun with it. I just want to point out all of the cons of the game before going to the pros. So, let me ramble for a bit more and then I will tell you why I still think this game is worth your money.

Talking about technical difficulties, I had my sound completely turn off after acquiring the third power but it was fixed with a reload. The subtitles on many dialogues do not match the voice-lines. Music transitions feel weird and abrupt at times, especially in the open world.

Character animations can be weird at times, especially in the cutscenes, sometimes not having lip movements, while they were present in other scenes. The game encourages you to explore with experience and relics, but levels really do not feel satisfying at all – they give you a bit of max health and energy, and call it a day.

There, done. These are all the bad points I found about the game. I hope that I am the only one to encounter these technical issues. As I promised, here is why I think you WILL like the game. 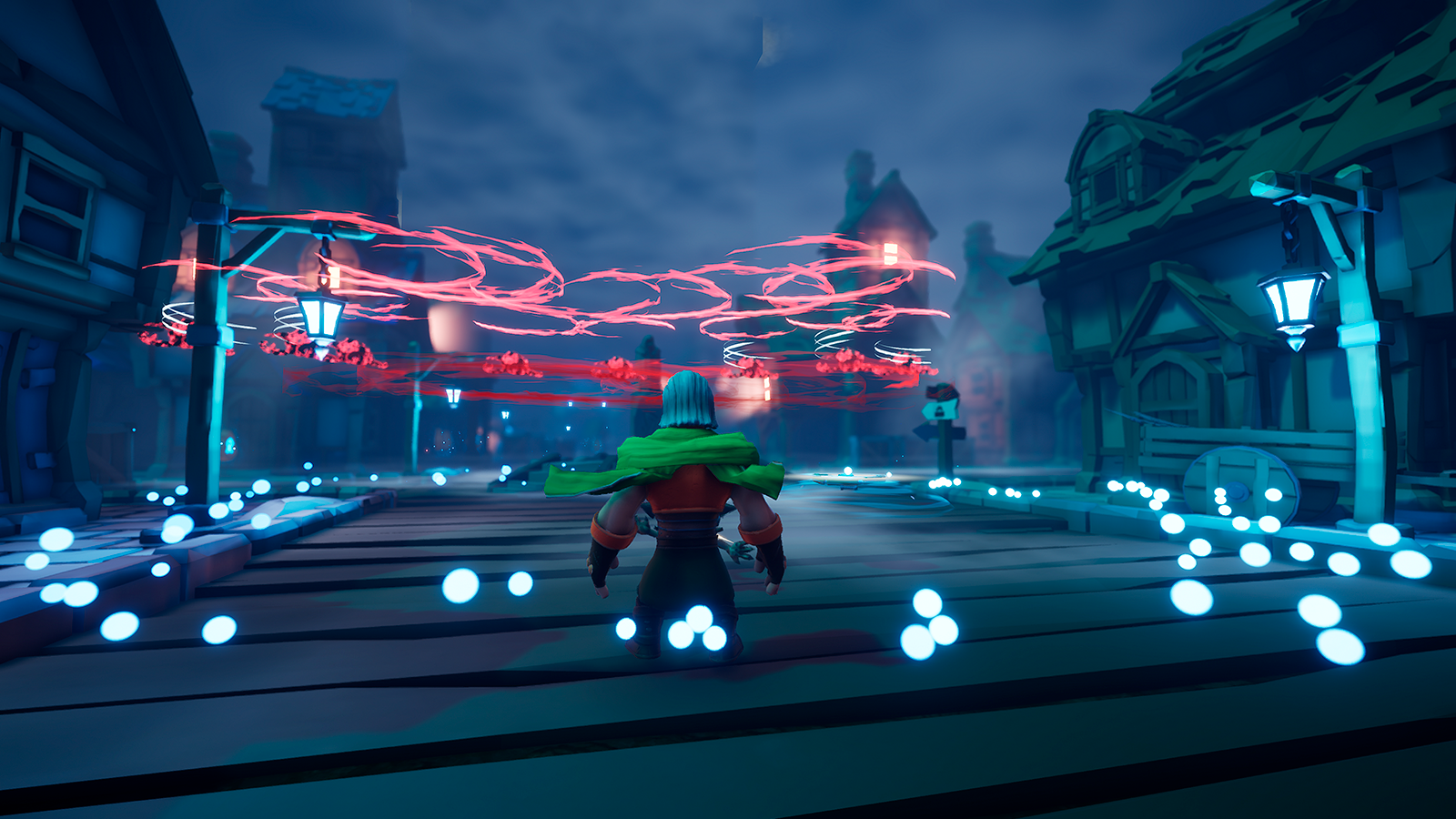 One thing I consistently noticed throughout the game is that level design is top-notch. You never feel lost in the game, all puzzles can be solved quite easily if you are observant enough. Backtracking does not exist in any shape or form – if you are to go back through the same segment, it usually involves new challenges, such as additional hazards or enemies.

In general, I found puzzles to be fun, though not particularly hard. Rarely did a puzzle take more than a minute to complete. And if you do take your time, well, get ready for Galand to mock you over and over again.

Another great element of level-design is that it encourages active exploration. You can find many things, such as different chests with experience and relics. Naturally, some of them are hidden better than others, so you will find stuff regardless of how fast you try to finish the game.

One thing you only notice when it is extremely bad is UI. In Effie, UI is almost non-existent, which really helps you immerse yourself in the game. There are only 3 bars – experience, health, and shield energy. They are only shown when they are relevant, so most of the time your screen is completely clutter-free.

Finally, I absolutely adore the story of Galand and Melira. It just brings you the nostalgia of when times were simple, when the characters did not have to be those complex entities to be loved. 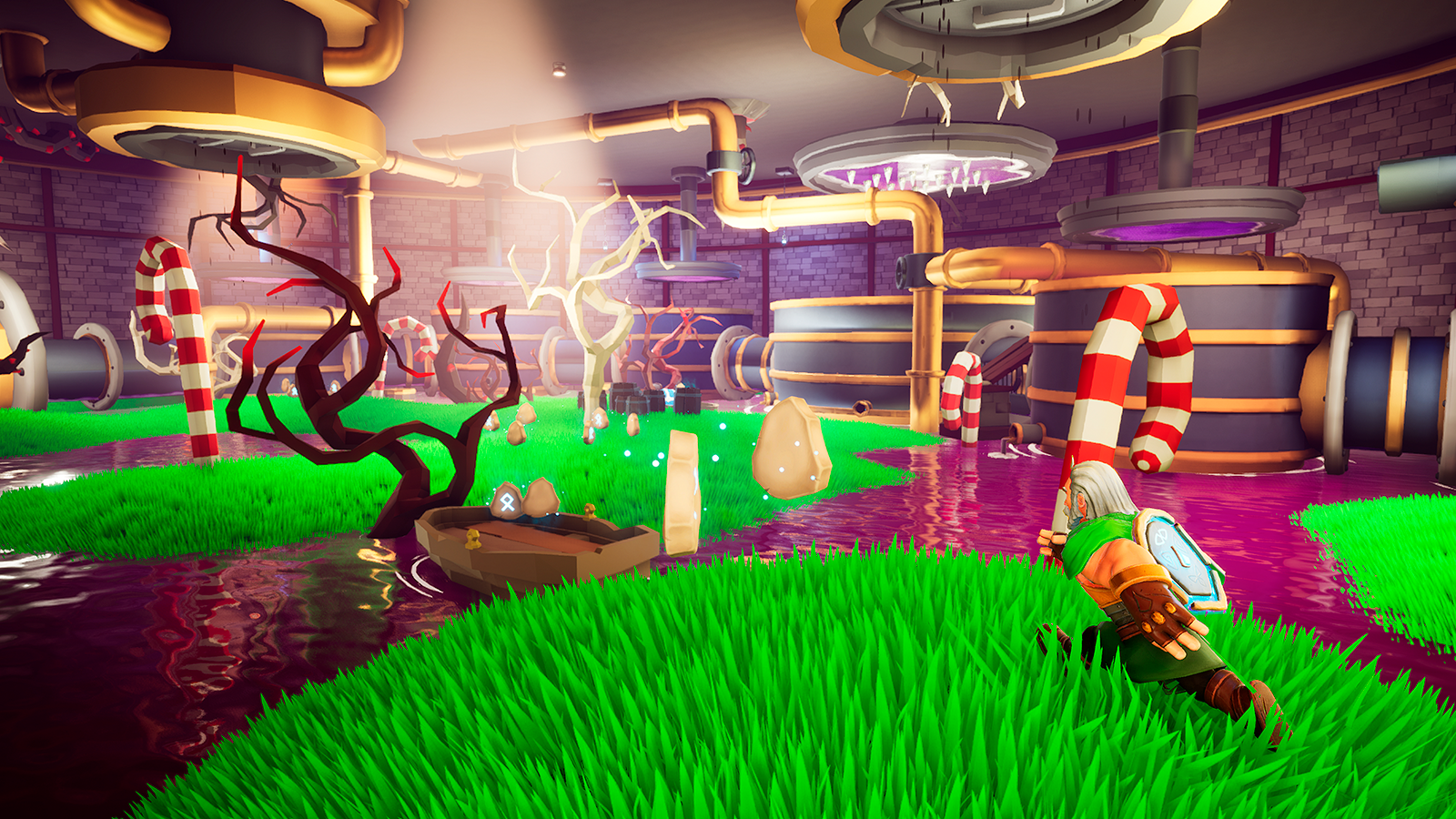 Effie is a fun little game with a simple but pleasant story, dynamic platforming, and somewhat gripping combat. Unfortunately, it has its flaws, especially on the technical side, and so the final rating is lower for it.

For all of its shortcomings, I loved Effie to bits. It could have been a much better game, had it fixed some of its glaring issues. However, this is the first PS4 and PC title for Inverge Studios, so I am personally looking forward to their successful development.

Effie is a light-hearted 3D puzzle-platformer with dynamic gameplay and interesting story. Some of its problems start to show by the half of the game, but it is still worth trying - if not for the game itself, then for the trip down the nostalgia lane.

The Biggest International Winners of Deal or No Deal

The Most Addictive Video Games Of All Time