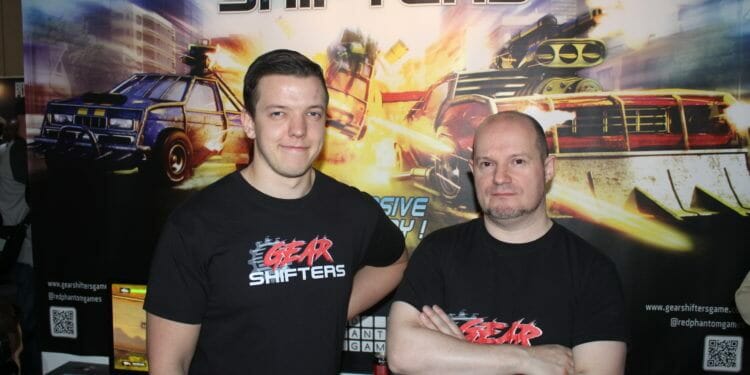 This is the first of a few articles about my time at EGX 2019 and the games that really stuck out to me. EGX has everything from brand new unreleased titles, popular games, merchandise, sponsors, tech, meet and greets and anything else they can think of to appeal to the average and hardcore gamers!

Every year I visit and the main section of the show I enjoy the most is the Rezzed/Indie area, where any developer or company can show off their game and speak directly to players for feedback and criticism. Here, I managed to play quite a few games over the 2 days I was at the event, and some surprised and impressed me enough for me to write about them and hopefully get you to check them out yourselves.

We start with Gearshifters, which, according to the games website, is a “high-intensity top-down vehicle combat combining classic shoot-em-up arcade gameplay with rogue-like systems” from developers Red Phantom Games.

Gearshifters is inspired by Spy Hunter, with the classic shmup style but using cars on the road instead of the typical planes or spaceships. The demo at EGX featured only a small portion of what the developers have made so far, but it was still enough to impress me.

The gameplay is polished and slick, featuring smooth controls, power ups such as drifting to aim diagonally, different types of enemies and bosses bringing about an all round classic and fun game. During the story you face different factions each with their own enemies and a boss to defeat, spread across different terrains and areas. You can also upgrade your car to suit your gameplay style making it a more personalised gaming experience.

As you can see from the screenshots, the game is played from a top-down perspective, however the developers told me this might not always be the case. The game is fully 3D, which reflects in a wonderful modern look, and this gives them the freedom to use different camera angles for cut-scenes, key moments etc if they want to.

Gearshifters is also going to be 60fps on each console which is always a big plus with me. You can follow @RedPhantomGames as they release new screenshots and gameplay up until release.

Red Phantom Games is a small team of developers with over 40+ years of game making experience and are based in Leamington Spa in the UK, right near myself! They do not only make their own games but help other companies with theirs, and are keen to release Gearshifters sometime next year on PC, PS4, Xbox One and Nintendo Switch.