Look past the mobile visuals and you'll find a fantastic game

Iratus: Lord of the Dead opens up like a free mobile game. You’re presented with plentiful resources, bombarded with game mechanics in a short tutorial, and then left to your own devices. However, dive deeper below the initial presentation, and you’ll discover that this is actually a fantastic take on the themes and features introduced with Darkest Dungeon.

With that said, read our Iratus: Lord of the Dead review with an open mind, you’ll be pleasantly surprised. 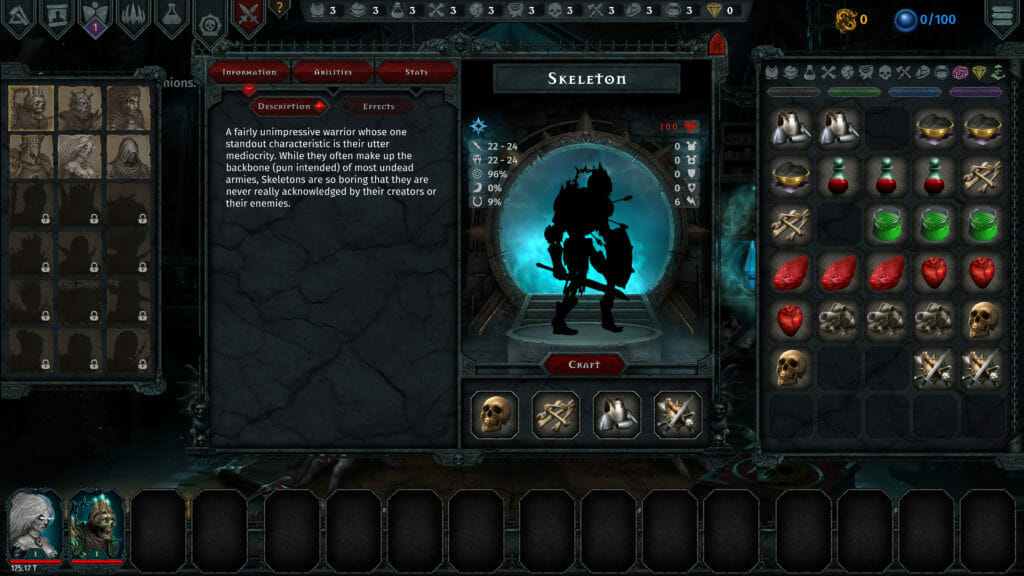 Don’t Judge a Book by its Cover

It’s impossible to start up Iratus: Lord of the Dead and not think, “this really looks like a mobile game”. The visuals are more than reminiscent of a small mobile title that’s after your money, they’re exactly the same, but that’s where the similarities end.

When you start a fresh campaign you’ll be bombarded with game mechanics and various rooms or pieces of equipment that you’ll be using, but before all of that there’s a warning. Don’t do what I did and take the message as one more bit of flavor for the game’s theme. Iratus: Lord of the Dead is a hardcore dungeon roguelike crawling experience with RPG mechanics.

If you don’t pay attention, it will eat you up, spit you out, and make soldiers out of what used to be your human form. 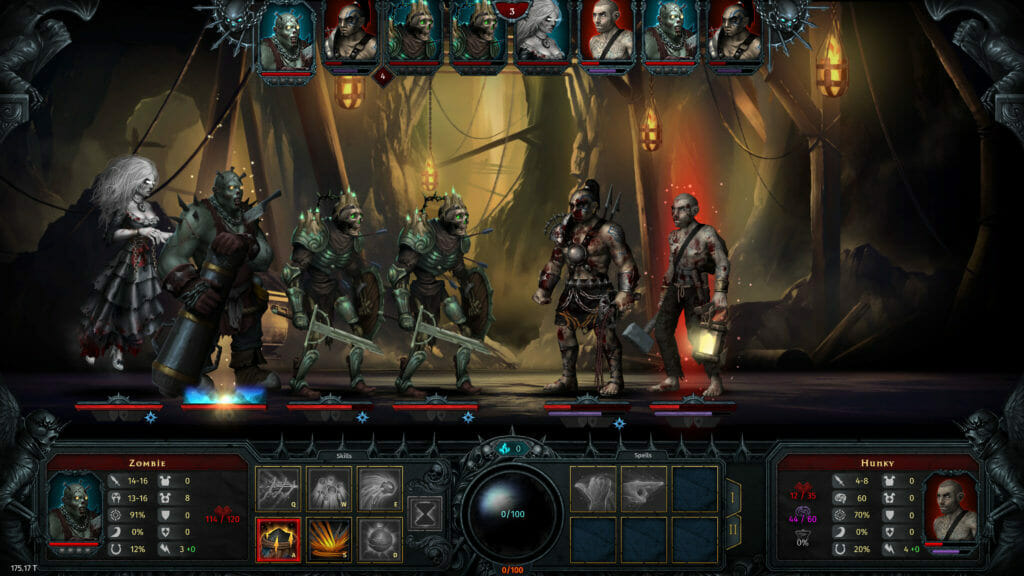 Back From the Dead

The story in the game is fairly simple. Iratus is (you guessed it!) a necromancer. Having been killed some years ago, his body has now been unearthed by a group of unsuspecting miners. After murdering the miners, Iratus now needs to escape the prison of Earth he finds himself trapped in, but he won’t be doing it alone.

Iratus can create minions to fight for him from the remains of those he or his minions kill. As you press on through the mines and other areas of the game, you’ll kill more and more enemies.

Each victory presents you with a veritable treasure trove of entrails and fluids. These are combined in the game’s crafting system to create new soldiers, be they basic skeletons, terrifying wraiths, the oddly annoying zombies, or one of the other colorful yet terrifying minions.

The range of monsters that you can build and use to murder the living is pretty big. This helps keep the gameplay fresh because almost every room in the dungeon will force you to fight a group of enemies. 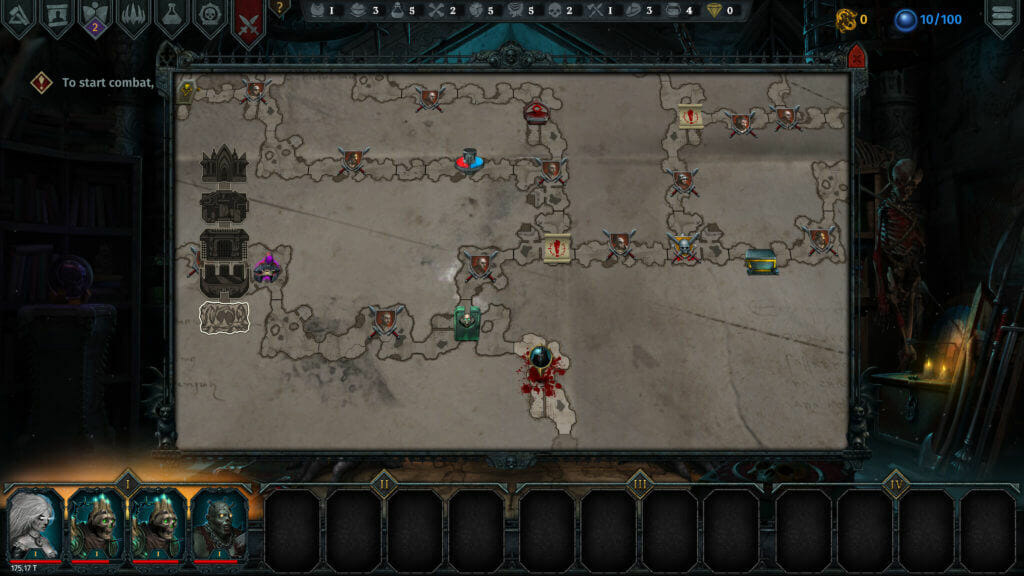 Combat in Iratus: Lord of the Dead is daunting. There’s a lot to get your head around, but the game does a great job of walking you through each element. At a very basic level, you’ll be taking part in turn-based combat against groups of enemies, up to four at a time.

Each character takes their turn, but not every minion has the ability to deal physical damage. While you might be expecting Wraiths to inflict debuffs and burn enemies with fire, they’re actually more inclined to attack an enemy’s sanity.

This is where the game begins to sound like Darkest Dungeon. Luckily you don’t need to worry about the sanity of your minions, their mental capacity is fairly limited. But if you damage an enemy’s sanity enough, it will have a physical effect on them, and can lead to their death extremely quickly.

If you don’t take a good balance between minions that deal physical and mental damage, then you’ll lose fast. There are some spells that can help you in battle, cast by Iratus himself, but even these have a limited effect if your entire squad is made up of Wraiths.

Once you’ve mastered both types of damage, you can start buffing your minions, and debuffing enemies. Minions gain experience over time and with victories, allowing them to learn new attacks and gain more power and presence. This will allow them to take down the more complex enemies that you’ll come up against in certain areas of the dungeon. 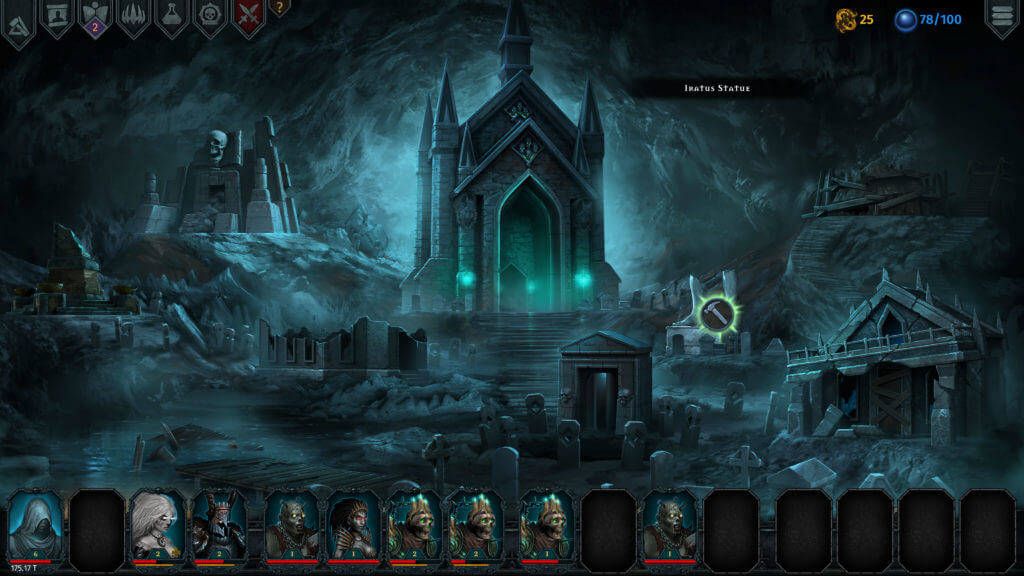 As you progress through the dungeon, your minions will get stronger, and you’ll earn new resources and other helpful items. You can keep minions out of battle for a few turns, allowing them to heal, but it’s also possible to make potions to heal and buff them.

Eventually you’ll lose a minion or two, probably Skeletons, but all is not lost when a minion dies. You can use dead minions in your graveyard, which acts as the equivalent to Darkest Dungeon’s town hub. Here there are a few desolate structures that need to be rebuilt, and you can do that with the remains of your minions.

Some of these buildings will allow Iratus’ mana to recover faster, others will heal any minions you put in them. There are almost too many buildings to work through in a single playthrough, though if you double back and explore everywhere in the dungeon you could probably upgrade everything.

Along your journey you will also pick up magical items and Artifacts, which can be used to learn new spells, or act as a one-off ability for a boss battle. You can also find items that will upgrade a minion very quickly by a few levels, giving you the ability to level up a minion to take the place of one that may have perished.

There’s so much going on that you need to be careful not to waste the finite resources you have. When you play smart, you can progress through a lot of rooms at a decent pace. If you’re lazy and don’t play the game according to its rules though, you’ll feel it in the losses. I went into Iratus: Lord of the Dead with an open mind. Having seen the trailer for the game, I thought this was a quick PC port of a mobile game thanks to those aforementioned visuals. Once I was through the tutorial though I was hooked.

This is a game that slowly gets Iratus’ undead fingernails into you, and before you know it you’ll be up for all hours of the night battling through “just one more room”. In a way it’s more accessible than Darkest Dungeon because it’s very easy to get into. The tutorial is clear, and allows you to work though it at your own pace.

There’s never a need to rush in Iratus: Lord of the Dead, and that’s what puts it ahead of other dungeon crawling roguelike RPGs in my eyes. Part of what makes it so interesting is the way that the lore of the world is told. You only get snippets here and there, certainly no lengthy cutscenes.

For example, the flavour text for one room early on in the starting area mentions how the miners found in the game are criminals, and general wastes of space. They’ve dug down deeper than any sane person would, but only because they’ve been drugged to the point that they aren’t aware of what they’re doing.

There are lots of tidbits like this that give you just a hint of what the overall world is like. It’s a dark place, but you can’t help but push forward through yet another battle just to get your next whiff of depravity. 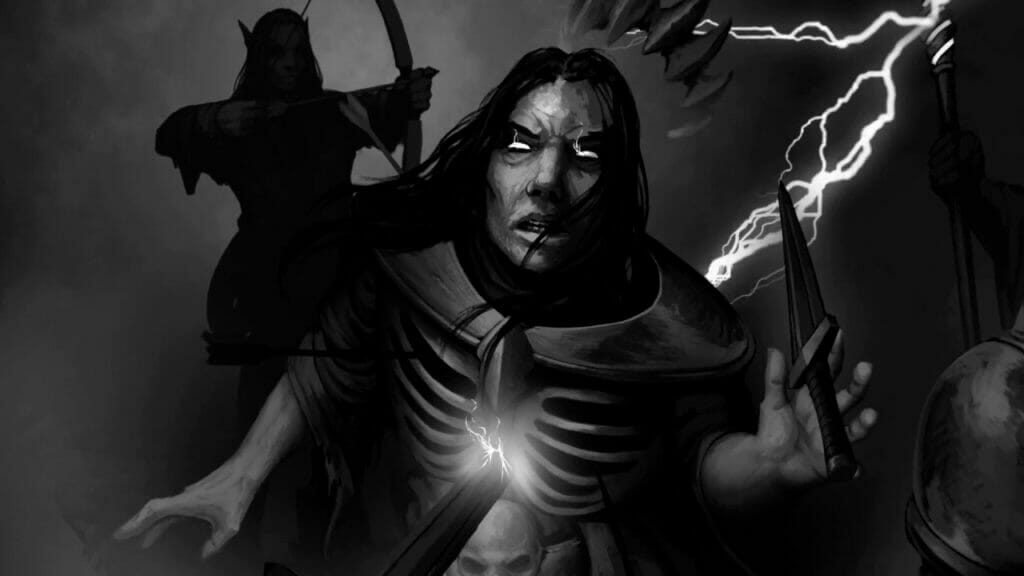 Despite it looking like a mobile game, Iratus: Lord of the Dead is a deep dungeon crawler with a satisfying combat system. It takes a lot of concentration to learn how the game works. It’s definitely not something you can dip in and out of over the course of weeks.

If you dedicate yourself to finishing a campaign, I guarantee that you’ll start a new one on a harder difficulty. Much like the miners of the game’s world, it’s like you’ve been drugged so that you don’t notice the hours going by while you fight battle after battle.

The game provides satisfying feedback for every action. The sound of a pick slashing your Skeleton is sickening, and the screams of your Wraiths are horrifying. You become genuinely invested in your shambling minions because of how much they can improve, and harder they can fight as a result.