Stay out of the water... and probably off the beaches... maybe avoid boats too

Open world action RPGs gained a lot of popularity in the early 2000s as superhero games started to take off. While modern versions of this genre have been trending toward somewhat subdued and focused games, Maneater brings us back into the realm of an over-the-top super-powered protagonist destroying everything in its path. This self-proclaimed “ShaRkPG” turns an ocean (and beach) into a hunting ground and lets you aim the crosshairs of a shark-shaped killing machine. 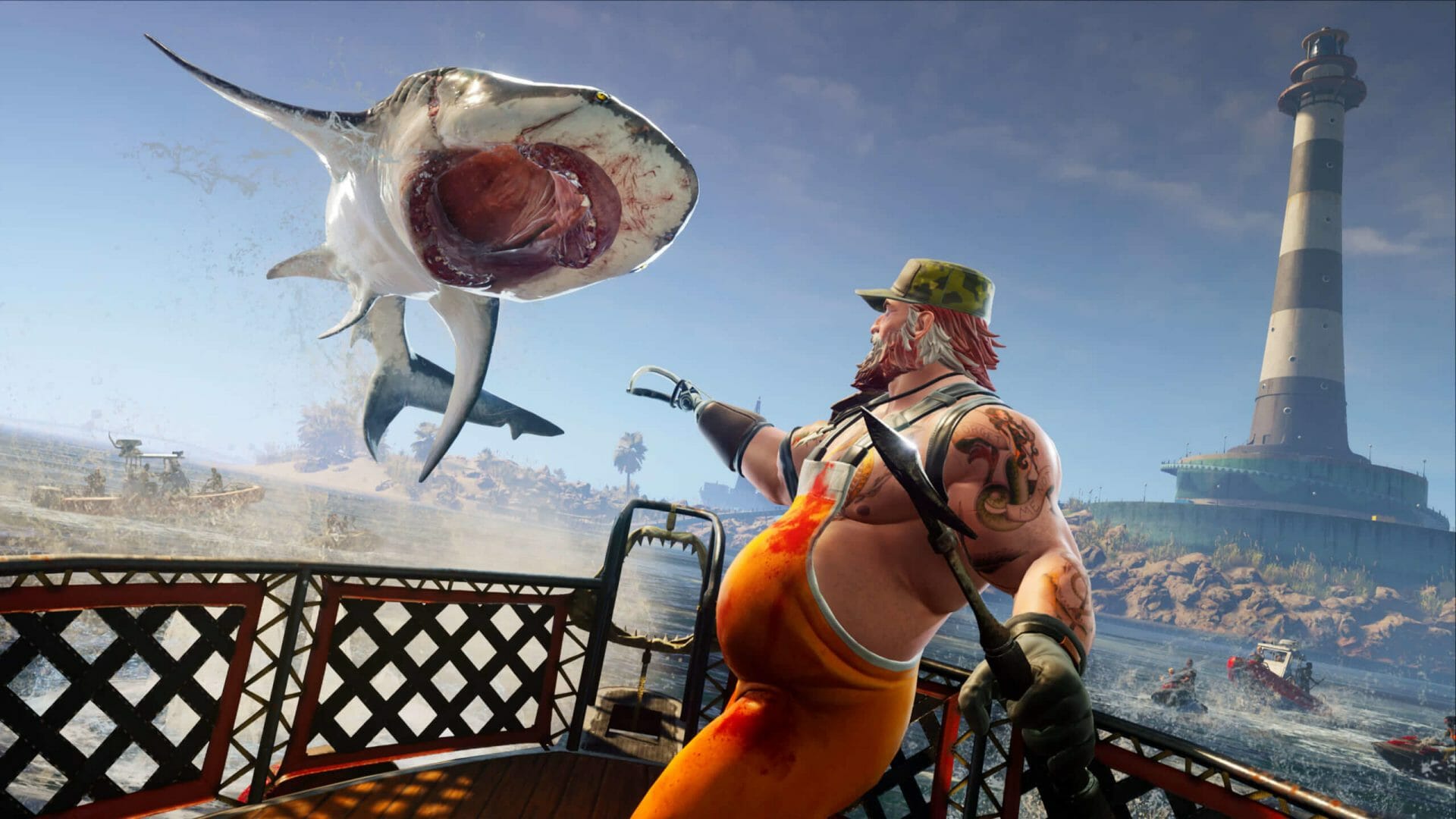 Maneater has a very straightforward premise. After the introductory tutorial sections and some exposition, you’re dumped in the water as a shark pup. The story follows you and your antagonist, Pierre LeBlanc, in a Shark Week-styled reality TV show. For you, virtually every event you partake in is narrated by Chris Parnell, known for his numerous TV and movie roles and his voice-over work as Jerry in Rick and Morty. His classic dry delivery is perfect for quasi-documentary-styled jokes and commentary.

The Pierre LeBlanc cutscenes and your often bloody interactions with him serve as the driving force for the story. The interviews show off his shark hunting capabilities as well as his rough relationship with his son Kyle who is serving on board for the summer. These story beats aren’t numerous or lengthy, but do a decent job putting a moderately serious spin on an otherwise wild game.

For the bulk of your time, however, you’re going to be navigating the seas as the shark protagonist chomping down on as many sea creatures as you can fit in your jaws. The primary goal throughout the game is to grow and mature into an unstoppable force. Every creature you consume and challenge you complete gives you digested materials and XP toward leveling up. Levels gained add bite strength, size, speed, and abilities for you to use in your continuous rampage through the ocean. 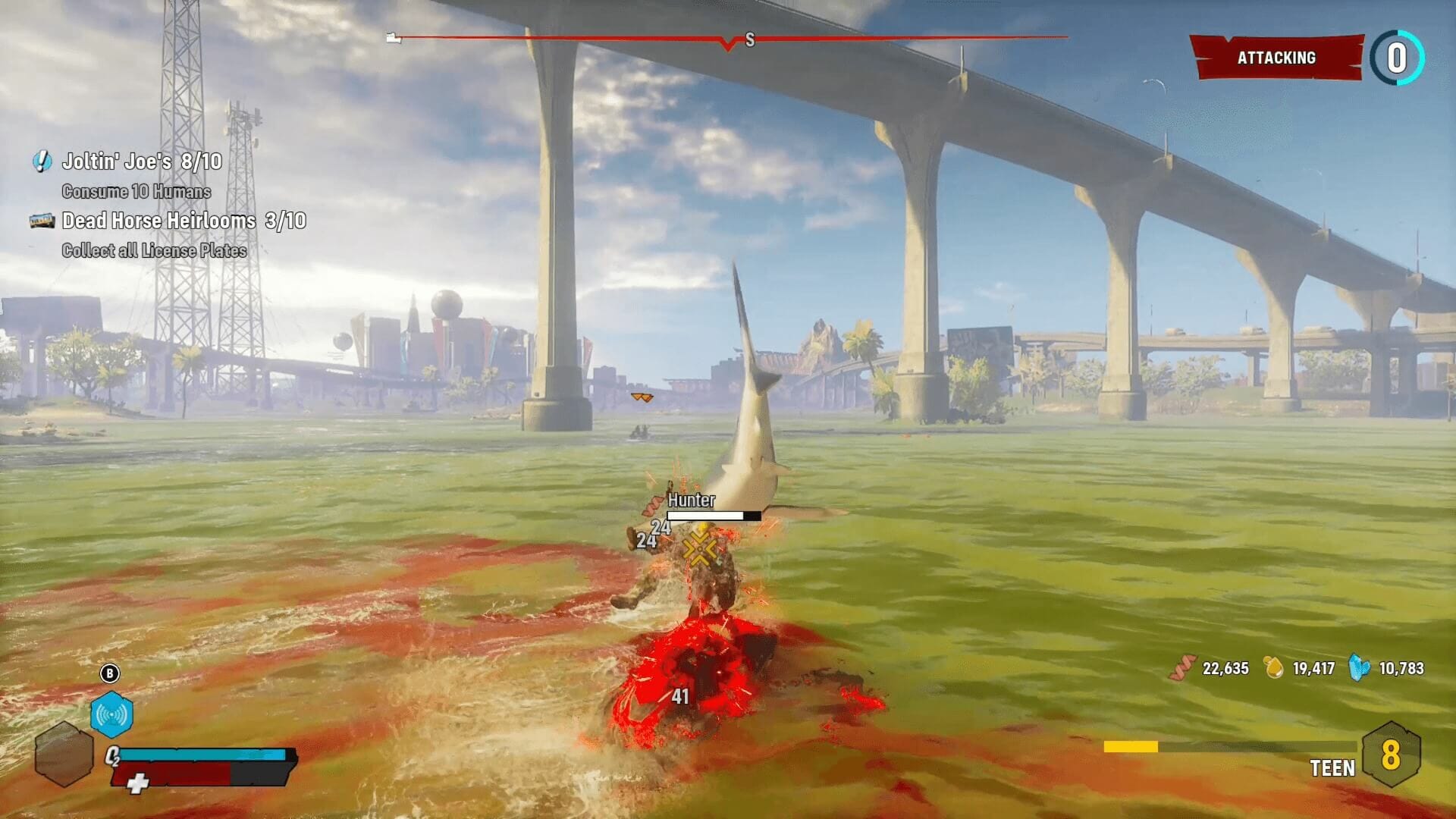 Maneater centers around destroying and consuming. The “rip and tear” catchphrase of modern Doom games probably fits this game even better. One of the first abilities you learn is grabbing prey or enemies and thrashing them in the water. This can work in conjunction with your standard “bite” ability to do more damage. However, you can only grab and thrash animals that are smaller than you by a certain degree. So most of the toughest combat involves some rather limited maneuvers.

The map is divided into several coastal waterways that feature different types of environmental features. You start in a beautiful bayou that is fairly shallow but still full of life. You venture into lake areas, coastal canals, and ultimately the much more open harbors and waterways of the gulf. Each of these areas has a set of required missions that, once finished, unlocks an “Apex Predator” mission that has you fighting the strongest enemy you’ve encountered up until that point.

These fights are among the toughest in the game, but it’s mostly because there’s little you can do but practically button mash your way to victory. The limited move set against larger creatures means you’re usually swimming in, slapping the right trigger as much as possible, and dodging their attacks. The tail slap you learn can be used for extra damage or to turn nearby fish into projectiles, but it seems the most effective tactic is always diving right in. While it was exciting to get to these points, the activity itself wasn’t as fun as you’d expect a boss fight to be. 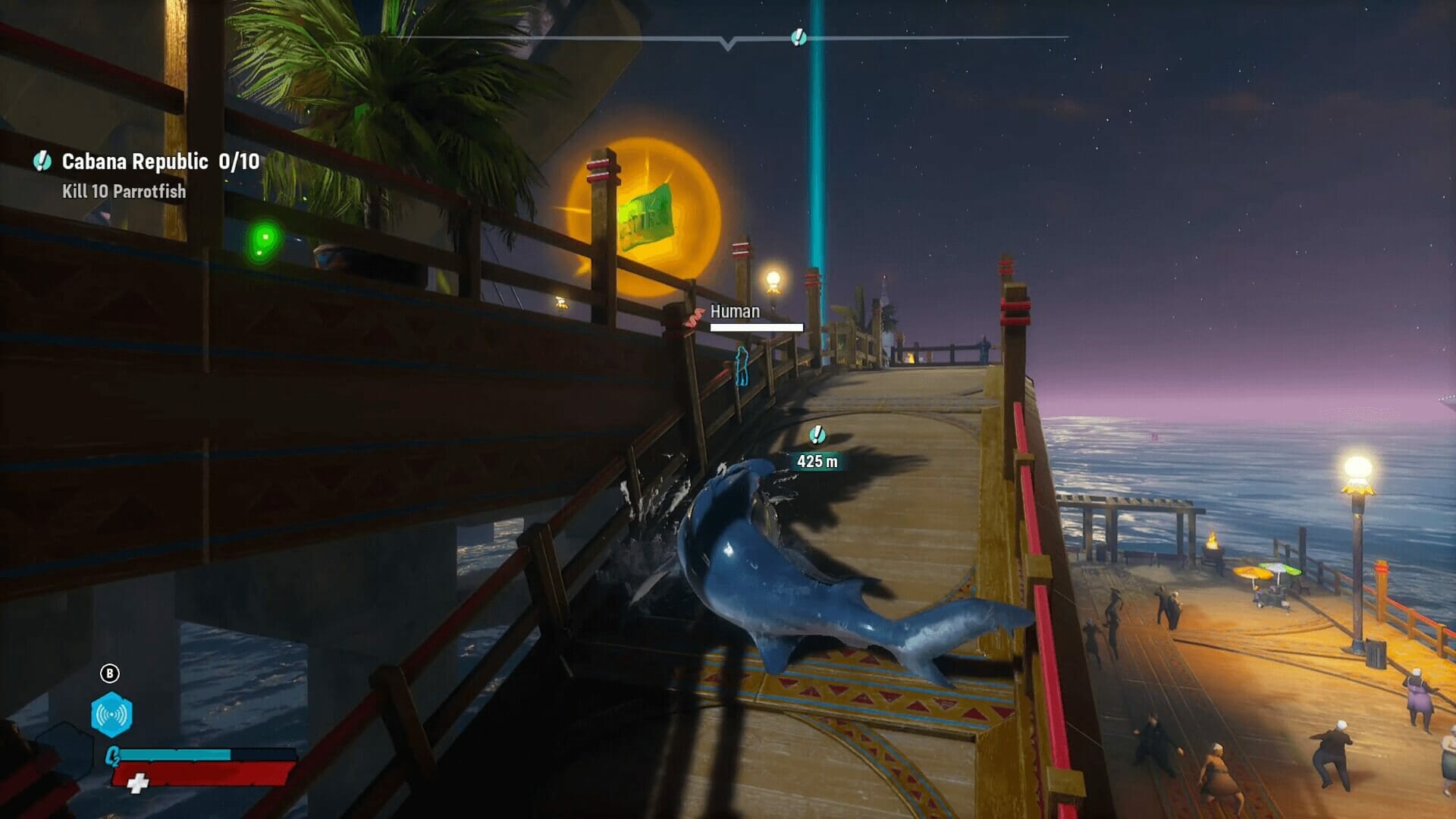 One of the more interesting parts of Maneater is when you live out the namesake. Eating humans is often the most brutal part of the game but poses some of the more exhilarating gameplay. When you do get to the point that this is possible, you’re generally relegated to thrashing around in the water causing havoc. You can hop up on land, but your young shark form can’t stay there long. However, by the end of the game, you bounce around on beaches and piers for a seemingly ridiculous amount of time chowing down to your heart’s content.

In this process though, a threat meter builds and, once full, shark hunters appear in boats. Individually these boats do little, but as time goes on you’ll have several at a time swarming around the surface firing guns and harpoons at you. The boats get larger and more dangerous, but you also gain the abilities to help you better deal with them. The joy of pouncing onto the deck of a boat and chewing on the occupants while tail whipping their bodies at other boats was one of the more fulfilling parts fo the game.

This process also has “infamy” levels that build and are maintained between each shark hunter encounter. You can sit and fight them as long as you’d like (or as long as you can stay alive) and when they tick over to the next level, a special hunter appears. This named hunter usually has slightly better weapons than their previous-level hunters but poses little more threat. They can be dispatched just as easily as the others. When I took the first one out, I didn’t even know it was the special hunter. However, doing so is very worthwhile since it unlocks more upgrades for your shark. 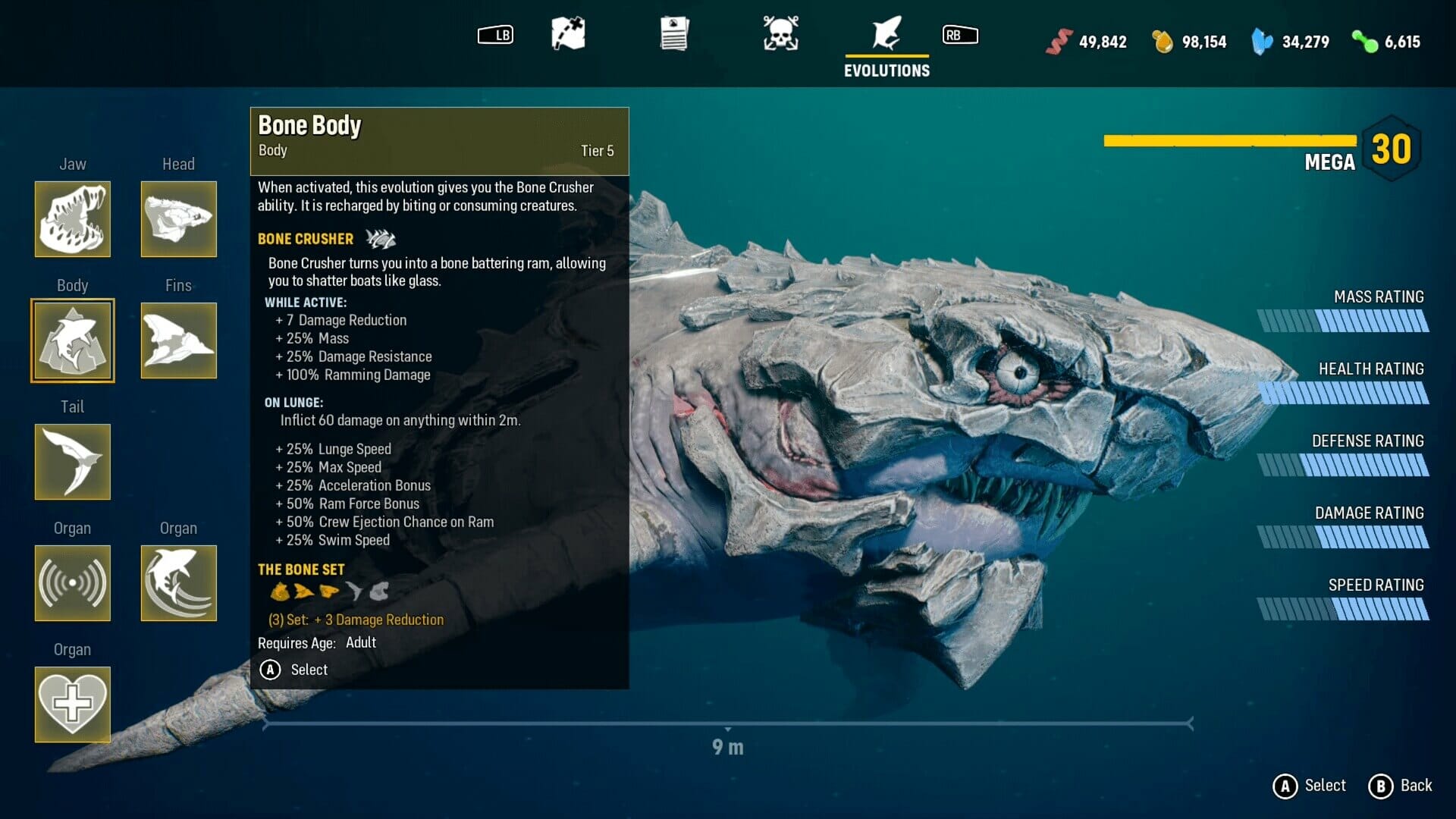 As you grow and gain a handful of abilities like sonar that shows hidden items and prey near you, tail whips, and so on, you also gain access to evolutions. These allow you to augment certain parts of your shark. Internal organ evolutions may make it so prey you eat provides more materials for upgrades.  They can even give you more time to breathe on land. Some evolutions are things like bone armor that makes you tougher or electrified teeth that give your bite a chance to stun enemies. You can mix and match these, but combining multiple evolutions of the same time yields set bonuses.

These can be accessed through taking out those named shark hunters, but also several other ways throughout the game. Sometimes the requirement is finding all of the special locations in an area, which involves you biting a sign and listening to Chris Parnell give a funny description of what it is. Others are given to you as the story missions progress or as you level naturally. To unlock them all, you’ll need to do a variety of tasks in the game.

The variety of tasks can be disappointing, however. The bulk of the missions involve simply eating 10 of some type of sea creature or humans. It would be one thing if these were just side missions, but its the goal of the majority of the main missions. The repetitive nature of these events is softened slightly by how enjoyable moving around and attacking can be. The fluidity in this movement seems very authentic and things like thrashing and leaping out of the water are wonderful to watch. Though leaping high enough to get some of the collectibles above the water can be extremely challenging. 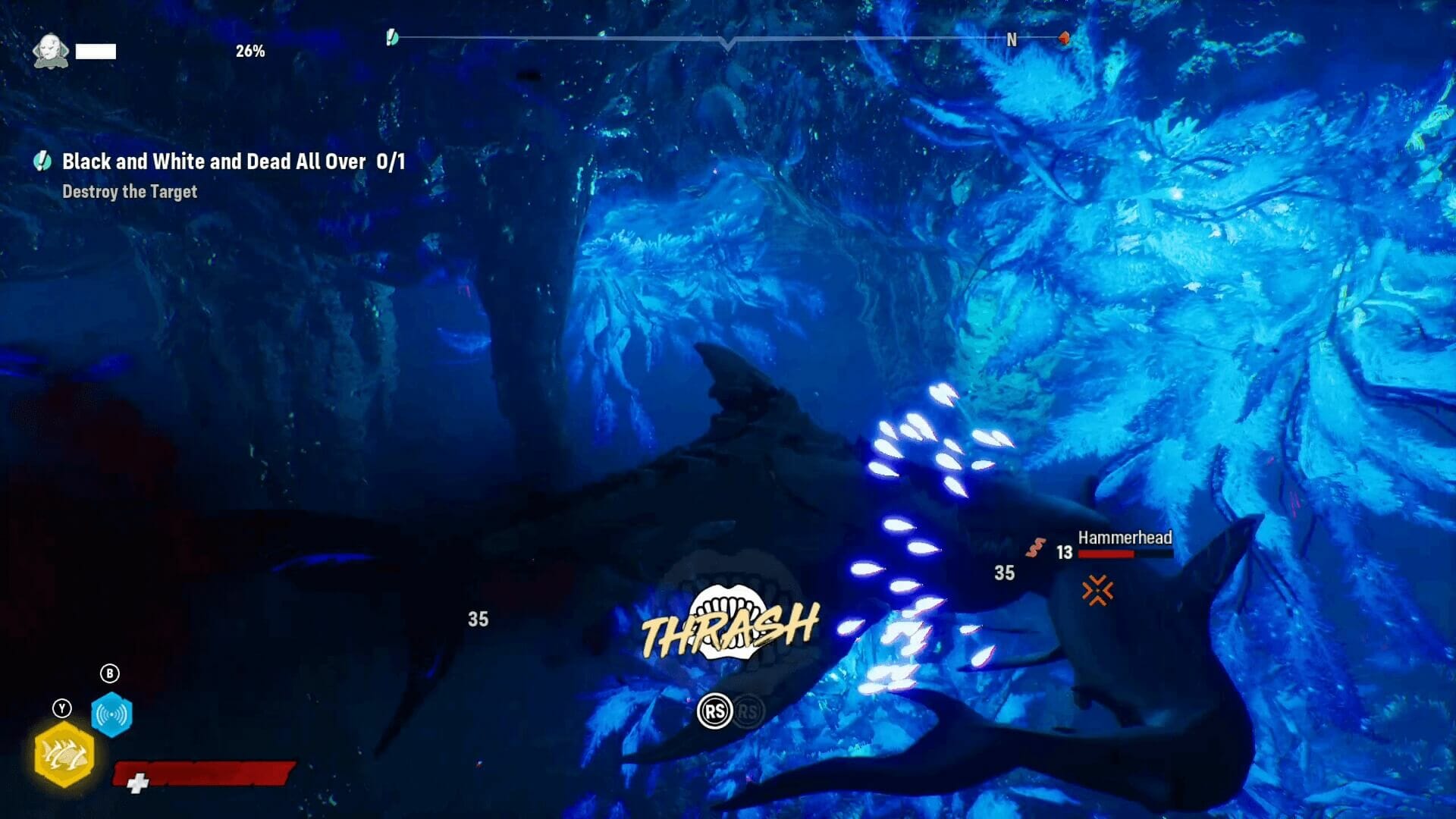 Something about Maneater instantly transported me back to the early 2000s when this type of open-world game was commonplace. Being able to travel around and do whatever you’d want while having that contribute to your overall experience is a core part of the game. It reminded me a bit of Spider-Man from 2018 with how there’s always a shark hunter boat or some special predator you can fight around every corner. Yet The Incredible Hulk: Ultimate Destruction was the game that I considered to be the closest spiritually to Maneater.

Both Maneater and Incredible Hulk share the design of always being super strong but growing to be even stronger to face more overwhelming enemies. At one point when you’re fighting off half a dozen hammerhead sharks, I couldn’t help but be reminded of that game. The differentiating factor, of course, is that Incredible Hulk had tons of moves for you to use and Maneater has only a few until you unlock Evolution-specific skills tied to your upgrades near the end of the game.

Maneater uses this design well and does many things to make the game enjoyable. It can be frustrating with how few abilities you have and how repetitive missions can get, but it’s saved by the fairly short ~10 hour run time. Within that period, you get a small but compelling story and loads of funny commentary and references alongside the shark carnage. I’m not sure if it’s quite worth the full $40 price tag given the limited replayability, but it’s worth checking out if you are a fan of open-world action games. Also, there’s just something primal and thrilling about being given control of a super-powered shark and making it the queen of its domain.

If you enjoyed this review, check out some of our others for Ion Fury on the Nintendo Switch or Deep Rock Galactic!

Maneater brings back the classic open-world action RPG with the twist of making you the villain in an undersea (and overland) shark-fueled rampage. While the mission design can get repetitious and the gameplay lacks depth, the raw action and comedy make the game a great experience.