A Lovecraftian soulslike adventure you may want to skip!

In the video game industry, the soulslike trend is now one of the most widespread and most loved. This sub-genre is usually highly appreciated by both critics and the public. The mechanics used in these games have become more rooted, improved, and rejuvenated over the last few years. Soulslike games like Demon’s Souls (which many players are rediscovering on PS5) and Salt and Sanctuary are excellent examples of remarkable development quality. Unfortunately, there are quite a few that never fully convince me. Still Running and Merge Games’ newest title is definitely one of those! Here is my Morbid: The Seven Acolytes review on PC.

This game combines the typical soulslike mechanics with an isometric view. This is something that is very dear to the most experienced players and undoubtedly a winning idea in my view. Here the RPG component is set aside. The game limits you to the statistics of the weapons and the insertion of passive bonuses through the accumulated experience.

Take note you won’t lose anything when suffering a defeat, which you might expect from a title of this kind. Whenever you want to have a great story, you need to make use of past and present events by utilizing the environment and the descriptions present in all objects.

These lay the foundations for the development of a lore that wants to be engaging, also thanks to the fascinating aesthetics of a proposed setting. The goal, however, with this game was only half successful. Yes, the lore is very interesting, but the rest of the narrative is impalpable. The motivations that lead the player to perform certain actions are often difficult to understand. 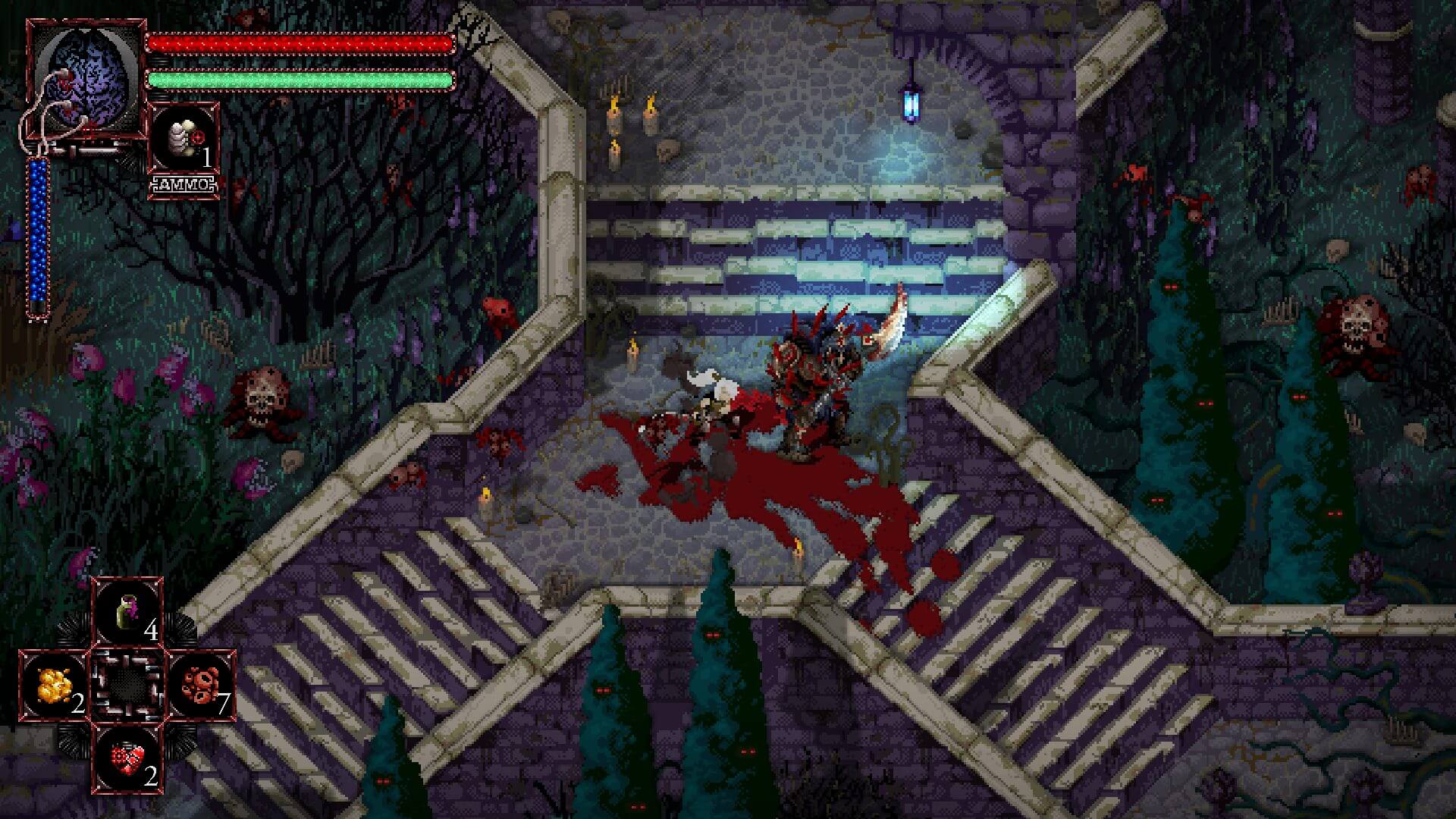 LOVECRAFT WITH NO DIRECTION

Let me move on to one of the biggest advantages of this title: the setting. As mentioned above, the game world is very compelling with it being Lovecraftian. The references are always very clear. However, at the same time, Still Running’s Morbid: The Seven Acolytes develops its own aesthetic identity. The story is basically about this plague that has corrupted the world and all the creatures that populate it.

Each ravine exudes horror through its pixel art, while the landscapes, without a shred of life, return only death and desolation. While you may enjoy and admire the map, the navigation side of the game is nowhere to be found. Take note that the level design is rather confusing. Several times you will feel like hitting a brick wall and don’t know how to continue.

This is not only that you don’t know where to go, but also the struggles of distinguishing one way from another. Individual areas show little variation, challenging even players with a great sense of direction. The conformation of the map provides no sign of direction. This is something that really becomes necessary when there is no other way to go about a certain situation.

Your protagonist in Morbid: The Seven Acolytes has a light attack, a heavy attack, and a dodge at his disposal. You also have the option to make use of a ranged attack by utilizing a firearm. The woodiness of the commands heavily influences the overall success of the combat system. You will notice that this immediately appears frustrating and difficult to manage.

The windows left by the opponents are very short, and the slowness of the protagonist is excessive. The cooldown of each animation takes too long, unless when you are dodging. Take note that the heavy attack is much more useful than the light one. All fights, from common enemies to bosses, are reduced to a boring hit and run.

The gameplay in Still Running’s Morbid: The Seven Acolytes is very basic and generic. Bosses don’t have a lot of attacks at their disposal and are more that often difficult to read. At the end of the day, all these factors add up. These factors make the fighting, which should be the highlight of the adventure, extremely tedious. There is not even a sprinkle of magic on the combat system to at least make me excited to fight a boss. 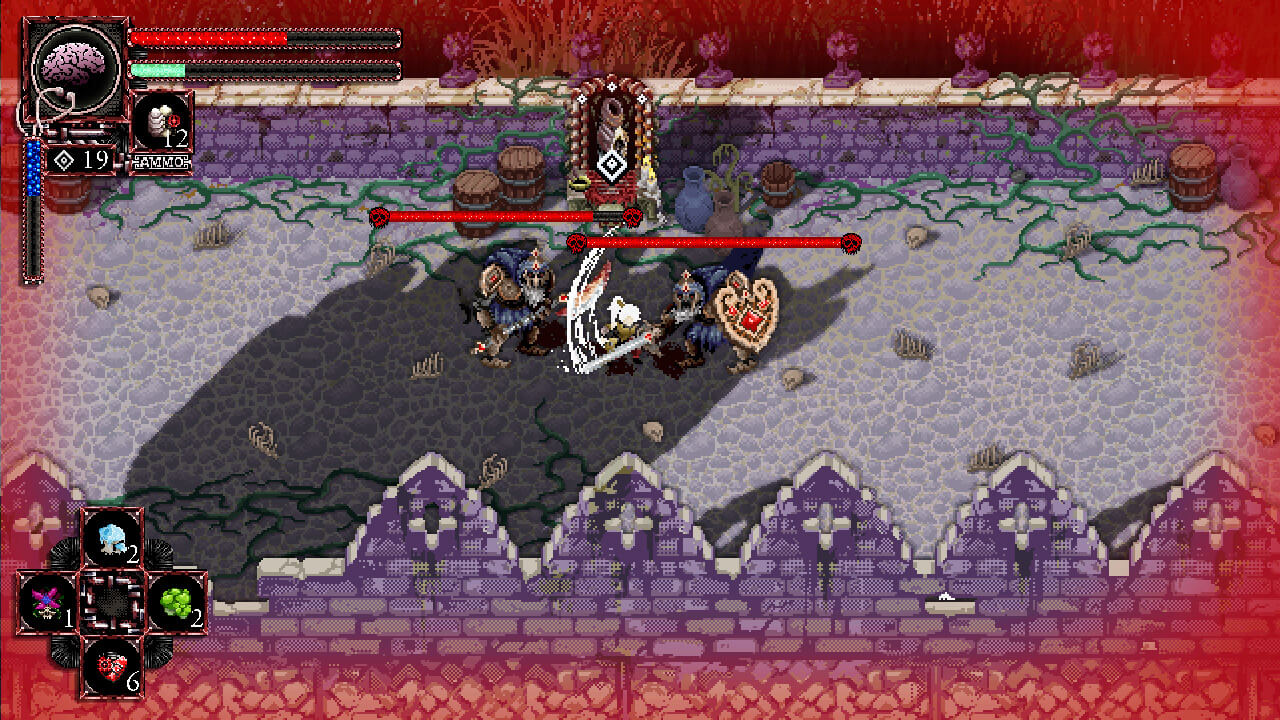 DIFFICULT TO USE MENUS

Everything else in Still Running’s Morbid: The Seven Acolytes is unexpectedly meager. Even though the lore of the game is meticulously told, the same cannot be said of the side quests. The game gives these side quests through one or two lines of dialogue. They also mark it in a menu that will do nothing to help you understand what is going on. The menus themselves are very difficult to use. The organization and clarity of these menus are just atrocious.

To give an example, the number of runes you can apply to the weapons completely overlap the upgrade details. Take note that the soundtrack is practically absent. They limit this for most of the time to a background melody. This melody provides a dark and mysterious atmosphere, but it soon becomes cloying. A few more sounds here and there will definitely help with the overall feels.

Everything wrong in Still Running’s Morbid: The Seven Acolytes is really a shame. The underlying idea within the game has a lot of potential. The charming setting and well-built lore is definitely something to be proud of. However, a game of this type also needs good gameplay that is up to par with similar titles. The terrible combat system, the badly calibrated timing of the animations, and the woody commands make everything frustrating. I will recommend this game only to fans of the soulslike genre that are ready to look past a series of issues and bugs! Do you want to try Still Running’s Morbid: The Seven Acolytes? What do you think of my Morbid: The Seven Acolytes review on PC? Please leave your thoughts in the comments below. Are you interested in more games? Check out our reviews for When The Past Was Around, Infernal Radiation, Chronos Before The Ashes, El Hijo – A Wild West Tale, Haven, DOOM Eternal, Super Meat Boy Forever, and Gears 5: Hivebusters.

Being able to develop a quality soulslike game is not an easy task. The impression you get by playing Morbid: The Seven Acolytes is that the developers have tried to revive a title in which to feel lost, only to discover slowly what is happening. However, this was all very unsuccessful!

Anime Impressions: The Hidden Dungeon Only I Can Enter