Popup Dungeon Review – Build a Tabletop RPG Without a Tabletop

The world has no shortage of roleplaying games.  One of the oldest video game genres has been explored in almost every conceivable way. To stand out, developers have relied on exceptional writing or twists on classic gameplay, but few rise above the crowd.  While Popup Dungeon has some quality dialogue (and voice work) it chose a different route to originality.  One that gives you access to build as much of your own digital tabletop experience as you could ever want. 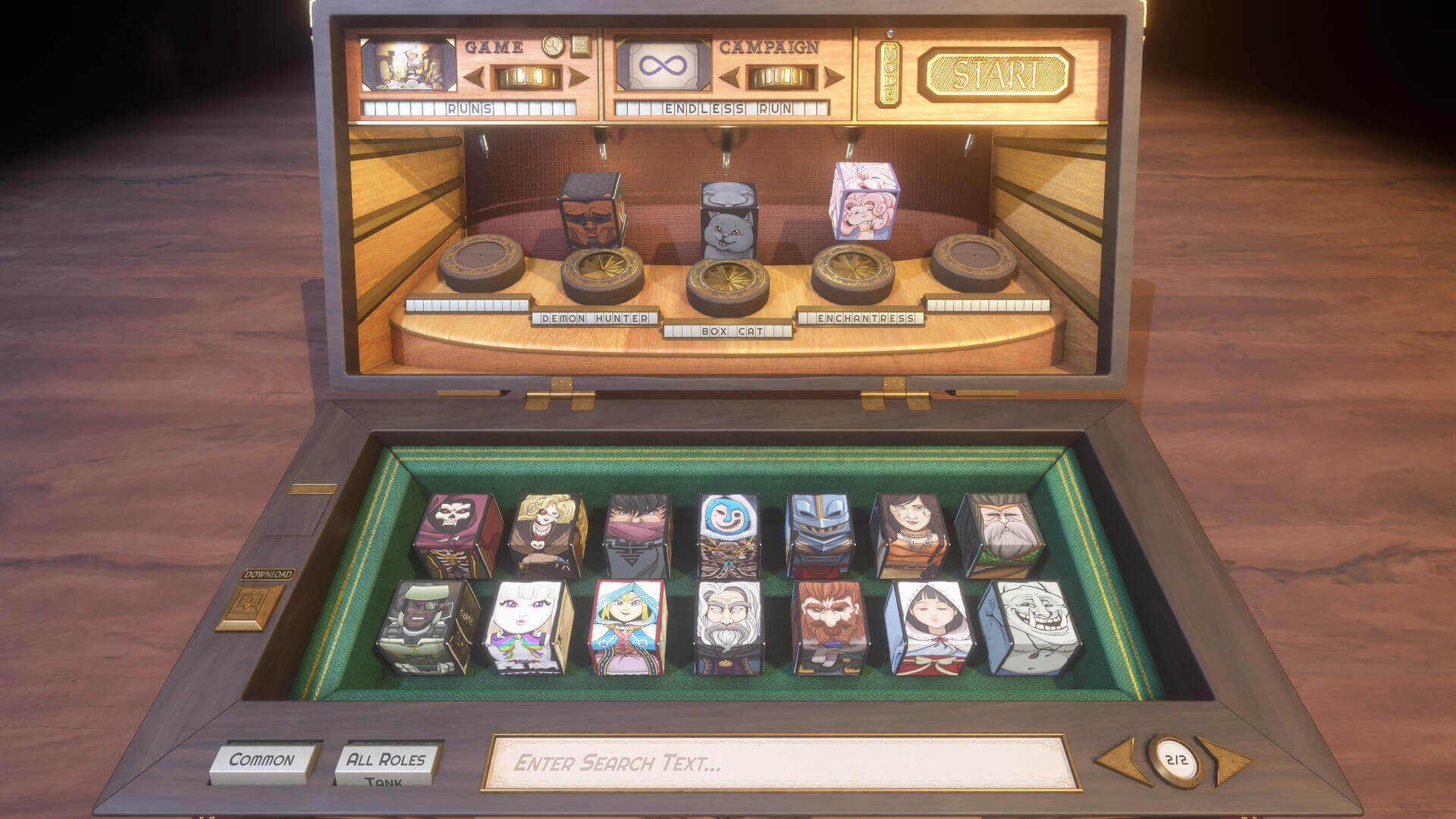 Know when to fold’em

The first thing you’ll notice about Popup Dungeon is that all of the characters are of the iconic papercraft design.  That is to say, they’re paper boxes with printed or drawn images of the heroes they represent and have little legs and arms tacked on.  I encountered quite a few of these as a kid in magazines and books. They only required you to cut them out and fold them up to enjoy a neat little character or vehicle.  However, in this increasingly digital world, I can’t remember the last time I saw one.

Popup Dungeon brings them back into the spotlight, even if it’s seemingly just for a fun aesthetic. All of the heroes you can choose from for your adventures have this blocky design.  The papercraft design doesn’t end here though.  Paper construction comprises much of the content in the game. All of the enemies and even the environment are designed to look as though they’re made from paper.  It has a unique appeal to it if only to see the routes they took to achieve this aesthetic

The paper design also functions as a part of the gameplay and narrative.  Every item in each level can be destroyed with just a simple click. While this may seem pointless, some items have gold in them, so it has quite a bit of value.  However, this process can be a bit tedious since it can be difficult to tell whether some objects have gold or not – and there are dozens in later levels.  Much of the narrative also takes place with dialogue from paper representations of characters bouncing around on wooden sticks.  It doesn’t seem like the most exciting way to tell a story, but it ends up working well. Popup Dungeon actually has several stories within it.  The main campaign involves 25 levels each book-ended by interaction with The Wizard.  This character is the proprietor of your tower climb and the architect of your adventure. He’s one of the only characters in the game not represented on paper, choosing instead some sort of animated emoji face for the sake of appearances.  John De Lancie, famous for playing Q and Star Trek as well as many other notable acting and voice roles, voices this character (to my delight).

The main campaign takes you through several different environments and puts you up against a wide variety of enemies.  However, what stands out most are the cards that navigate you through the story.  Every step of the way is achieved through event cards placed on the wonderfully detailed tabletop pathway.  Each swings out with a cool little animation to tell you a piece of the story or give information about what is happening.  This process also allows some of the D&D-like decision-making.

You’ll often come to events that involve a choice, and one of the options will be a skill check and a dice roll.  You only have one die though – the ultimate purveyor of chance, the D-20.  In another visually pleasing UI design, you shift up to roll this die in a little box, each time praying to the gods of RPGs that you’ll be successful.  Doing so usually rewards you with safely moving forward, sometimes with bonuses or special items. Losing a roll leads to more entertaining results, but also debuffs and unexpected combat to go along with them. 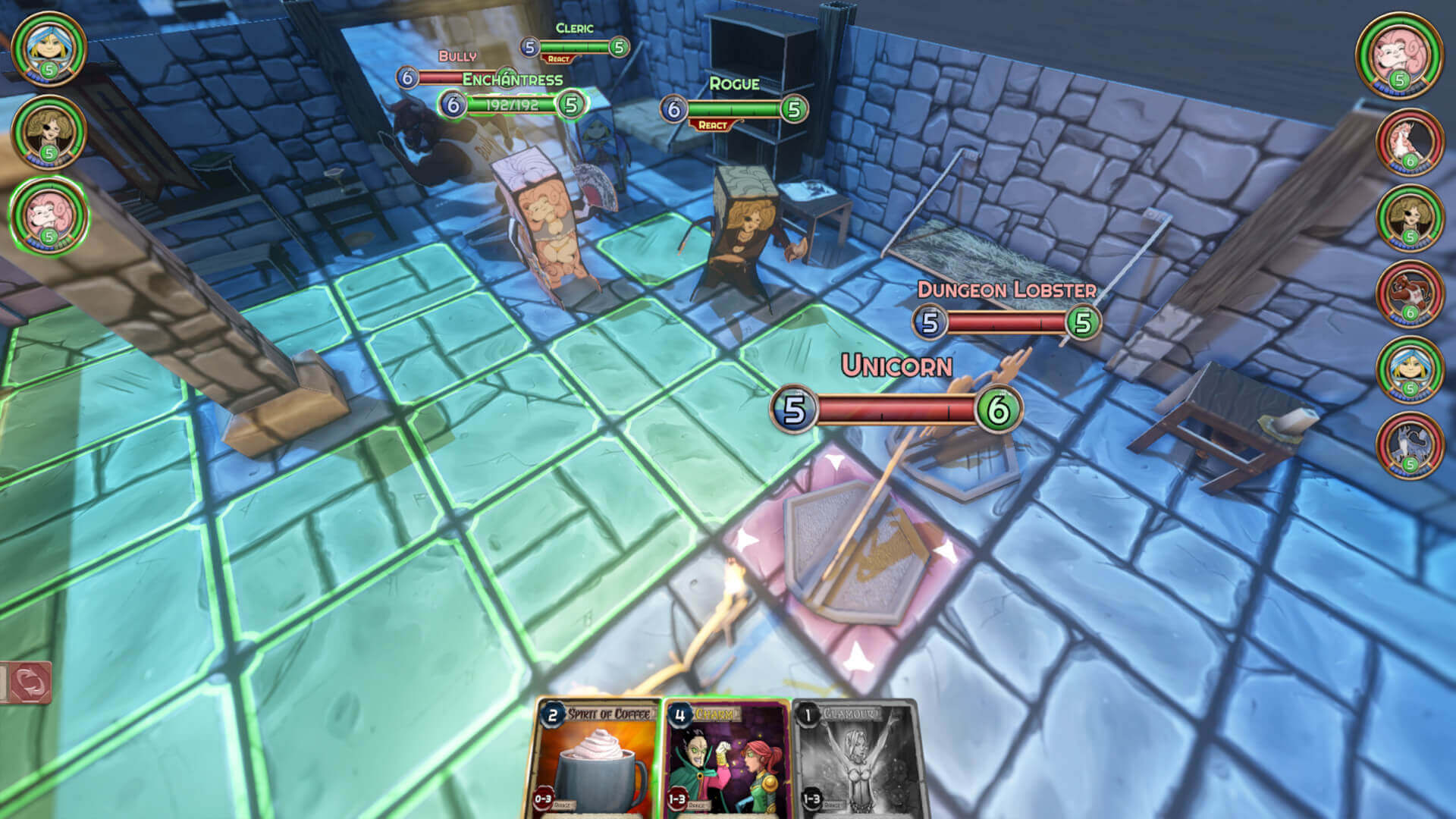 Combat in Popup Dungeons is generally pretty simple and straightforward.  It has all of the typical setups of a turn-based strategy/tactics RPG.  Many levels allow you to walk around exploring and clicking objects for cash.  Once you encounter an enemy, though, you get to split out however many characters are in your party and face off against a balanced number of enemies for that team size.  You can place your units strategically on the playfield before you commit to starting combat.

Nothing about the combat is particularly surprising.  Each character gets movement points and action points.  Each ability they have, whether inherently or from items, takes AP to perform.  Some have limitations such as charge up time, cooldown time, or number of uses.  These function to make those abilities stronger for the additional cost.

The nature of the combat can be very finicky.  If you don’t have a properly balanced group or you get unlucky with someone getting focus-fired, battles can go sideways quickly.  I had to restart the first level because I got into a situation where I would lose a character immediately (and ultimately the battle) no matter how I played.  I didn’t encounter this too often, but after the tutorial, I was much more aware of the importance of balanced groups and character placement. 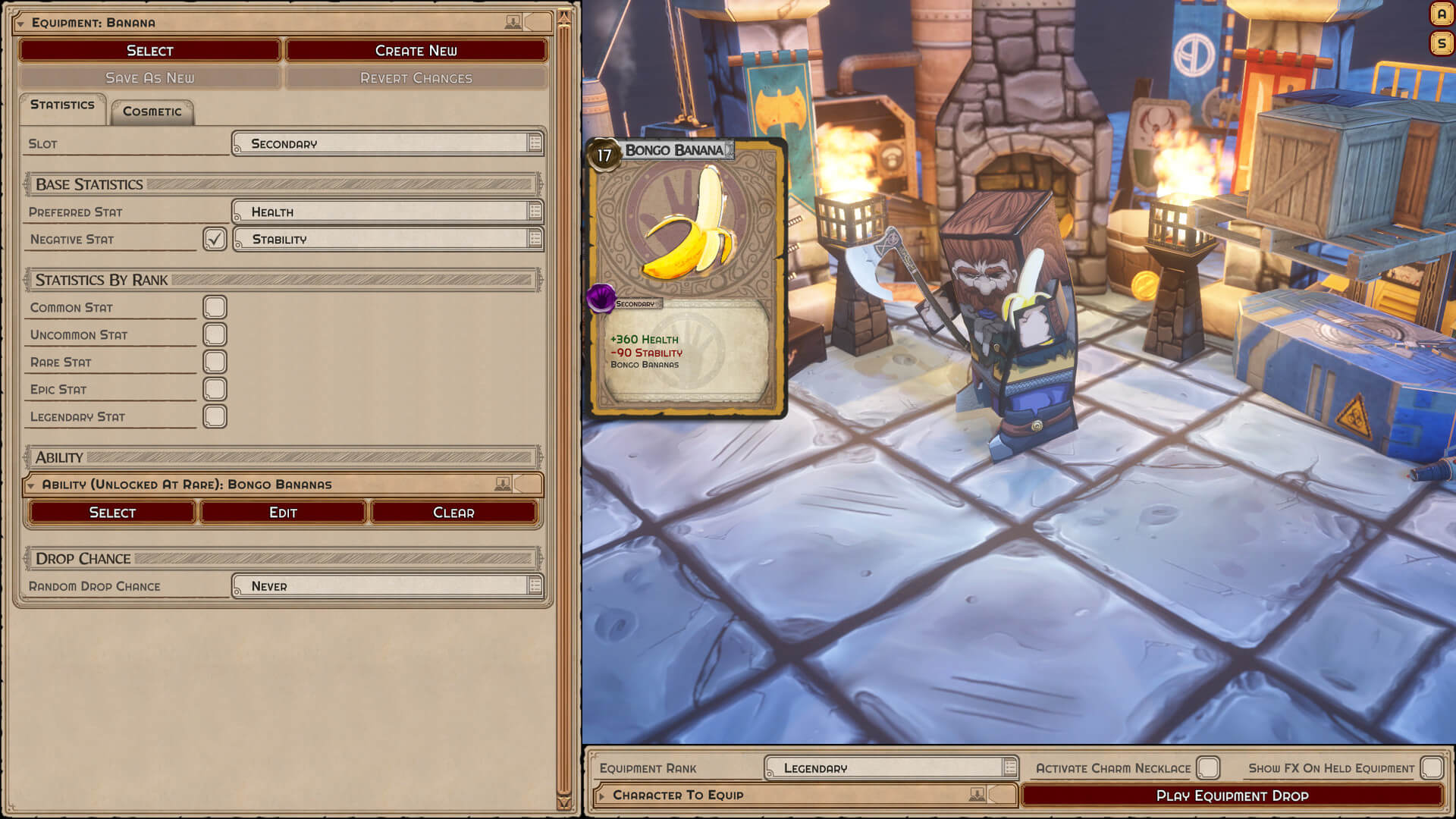 One of the most interesting parts of Popup Dungeon is how robust the customization portion is.  You can create or edit nearly everything that you encounter in the game.  Things like new characters, abilities, voice lines, enemies, game modes, and even campaign design.  This can be overwhelming for those that lack creative skills like myself, but I did end up finding some inspiration in the process.

The nice thing about this system is that it tries to and mostly succeeds in making sure whatever you’re making is balanced for the game.  You can’t just make an ability that costs nothing and instantly wipes the board of enemies.  It allows you to adjust sliders and point values to try to make exactly the ability you’re looking for.  The same goes for character creation as well, though, from what I can tell, you can make them a little stronger than some of the default characters.

While I didn’t do much in the game mode creation, I saw that it lets you build out the narrative “pathway” structure however you want.   You can add dialogue, battles, and all the events you find in the regular campaigns with customization for each.  It’s a robust system that will inevitably lead to this massive game becoming even more massive. 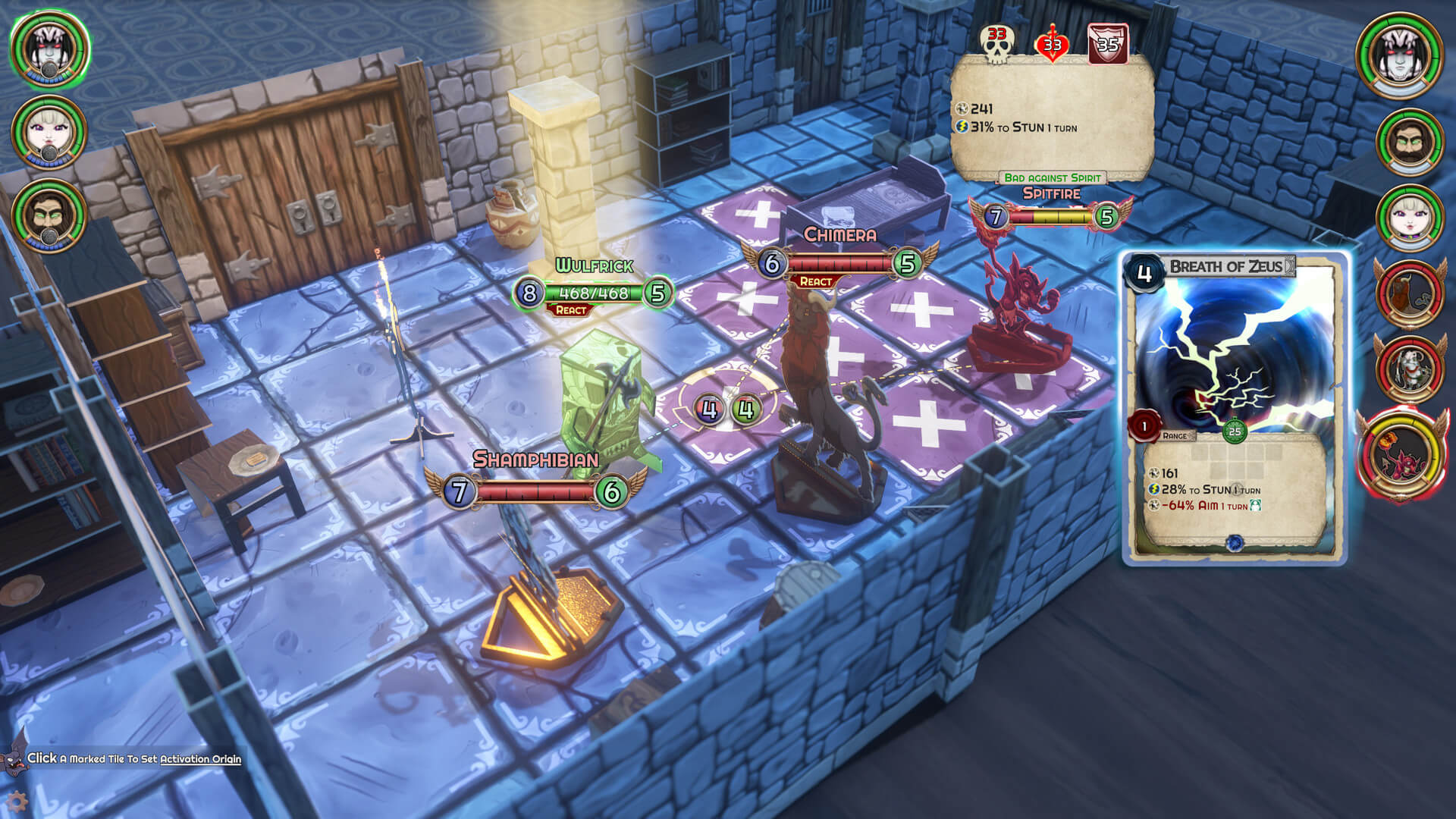 Popup Dungeon is a game with a mountain of content and the potential for unlimited waves of user-created stuff as well.  The stylish interfaces for the game, including the beautiful perma-buff charm system I forgot to mention, contrast the somewhat downplayed papercraft portions. It would seem like the dream for fans of classic RPGs, especially those that like making their adventures. It’s not without its quirks though. The first of which is that the limitations of the combat make it tiring as the lengthy game continues.

Some encounters may only have one or two battles and that’s fine, but others can go much longer.  This pushes the player away from the entertaining writing and voice acting that shines brightest.  The “Stories” mode shares this spotlight as well but also shares the repetitious combat.  There are also some issues in the way the combat interface works aiming abilities and accurately clicking in the isometric 3D view.  Oh and while there is some reference to the stats and statuses, it’s not conveyed well in the game.  I was always looking for tooltips to tell me what some items did without digging into the menu.

However, Popup Dungeon is enjoyable in numerous ways that make up for those shortcomings.  It has a quality that keeps you playing even as time drifts away.  I’d cruise for hours with the phrase “one more event” replaying in my head.  I’m also interested to see what people far more creative and driven than myself end up creating for other players to enjoy. Popup Dungeon may end up being a haven for creative writers and artists for quite some time if it becomes as popular as it could be.

If you’d like to see more reviews of turn-based games, check out Gears Tactics or this retro review of Chrono Trigger!

Popup Dungeon is a familiar turn-based RPG, but has vast creative features and solid writing that make it stand above its generic foundation.

Can I Learn Ethical Hacking Online