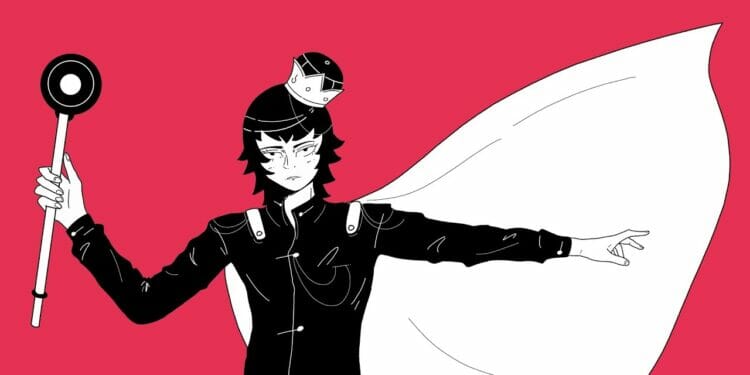 I’m new to the STEAM community and pretty new to the indie games that are so prevalent on the browser. I’ve gamed mostly in my little shell of survival horror, first person shooters and RPG’s. I always thought that I was pretty well rounded as a gamer, I enjoy my share of the weirder games and tend to lean away from AAA games now. STEAM has many of those games, some I never would have heard of had I not been given the opportunity to play them, one such being was Signs of the Sojourner and another is Milky Way Price: The Vampire Star.

This title is still in its DEMO phase so some things may change for the final release, but I will tell you about my experience with it. The biggest thing I will say is that this game will be a slow burn, it is more a visual novel and conversation simulator than a test of skill and reflexes. Milky Way Prince isn’t the usual type of visual novel that I play.

I prefer the gritty mystery type of visual novels like Hotel Dusk: Room 215, The Phoenix Wright Trilogy, Blacksad: Under the Skin and the like. Milky Way Prince is more of a romance story told in the first person. In the other visual novels I have had the pleasure of playing there was a form of thinking involved. I had to figure out what to do next or what sort of evidence to present.  In Milky Way you just progress the story by pressing certain things on the mouse.

The look of this game is exquisite, it has a Killer 7 look for the background and the characters are hand drawn in black and white. This gives the game a nice contrast, I enjoyed the overall look of this game. I’m big into visuals since I’ve been reading comic books since I was eight years old. Looking at this game was truly enjoyable, the visual style is amazing.

Seeing as this is a visual novel there really isn’t too much to know about the controls. If you have a mouse and some working fingertips you can navigate this title. During the breaks of conversation you can look deeper into Nuki’s life. At some points in the game you are allowed to click on certain items, you are told about them and can get a better feel for the character you are playing as.

The game begins with a child’s story about the Milky Way Prince, and how he was saved and took his savior back into space with him. You play as Nuki, a young man who is just trying to get his life together. One day in your apartment you see a shooting star, being a huge fan of that children’s book you rush off to see where the star landed. You find Sune sitting in the street in front of a coffee house.

Soon you find yourself drinking Milk with Sune and learning about one another.  Eventually one thing leads to another and he follows you back to your apartment. An intimate moment is shared and eventually he asks for your number. This visual novel relies heavily on romance and human interaction, something gamers aren’t use to.

The story is part autobiography of the solo developer of the game. It tells the tale of love, loss despair and what you do as a broken human to keep your love. It is a very deep and well written story that I’m sure will pull the heartstrings of many players. That kind of game isn’t really my bag though, I like to solve something or have to deep think in a game. Did I enjoy my time with Milky Way Prince? Absolutely! Will I play it again or hunt down more games like that? Probably not.