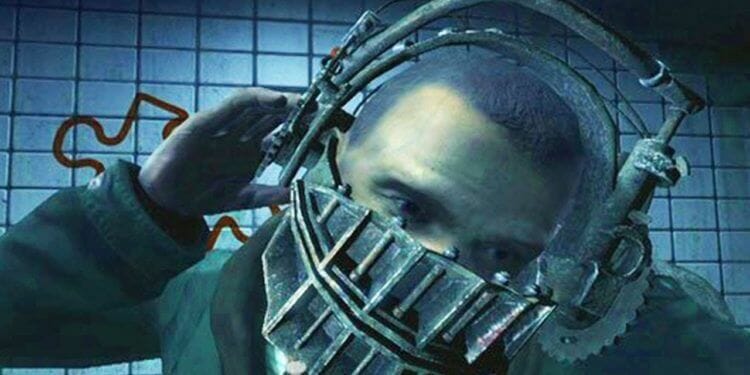 I think it’s pretty well known that I love all things horror, comic books, movies, video games and so on. What is neat is when one of my favorite horror franchises gets the video game treatment, and when that treatment isn’t pure trash! Developed by Zombie Studios and published by Konami, Saw: The Video Game is actually a well done version of a licensed product. When I got my copy I was leery, but in my youth the Konami name on the game meant a fun time, so I trusted younger me, and I’m glad that I did. While this is far from a perfect survival horror game, it is almost a perfect version of a Saw film. The traps, the atmosphere, Jigsaw, the intertwining story and the twists all make it on par with the movie series.

In the game you play as Detective David Tapp, yes the Detective from the first movie played by Danny Glover, in the game though he is voiced by Earl Alexander. After being shot by Zep Hindle while pursuing Jigsaw, Jigsaw helps Tapp recover and sews a key in chest. He, of course, is kidnapped by Jigsaw and awakens in an abandoned insane asylum with the reverse bear trap secured to his face. You escape this puzzle and are thrust full boar in the insane asylum, with this key in your chest you become a target of other Jigsaw victims. Let’s not forget that Jigsaw strapped you with the shotgun necklace seen in the third film. You must navigate this house of horrors while fending off other people who want to cut you open and while trying to save six individuals who are trapped within the asylum. These people are all a part of Tapp’s past and to save them he must figure out a series of clues before time runs out.

This game has some of the best atmosphere I’ve seen in games, the developers really nailed the look of the asylum, the traps and the obstacles. It is like playing a version of Saw 3, that’s how it felt as I played it. I felt the despair, the dismay and the instinct to survive so that I could see this through and figure out how it will all end. I like it when licensed games can pull this off and pull it off well. The traps and puzzles are amazing too, I found myself failing several people before I finally could get the device to stop or off of them. This game does take a lot of trial and error, so I’m glad that I’ve never been kidnapped by this madman! My Dad always told me to just get shot in the street instead of get kidnapped, you have a better chance of surviving that than being buried alive or put into one of Jigsaw’s traps!

The controls are pretty basic and somewhat clunky, whenever you have to press a specific button to get into your fighting stance, you know you’re in for a rough battle system. Holding Left Trigger sets you into your fighting stance, pressing B in that stance is block and A is attack. Out of fighting stance A is pick up, you can pick up a variety of things as weapons, if you want to go it alone with your fists just press the Right Bumper and you will drop the item. You gain access to a camera in the game, this camera will serve as your eyes sometimes. You can press Y to stun an enemy or to see in places where there is no light. Some of the traps you must go through going from person to person to save are incredibly hard, and not having a light source makes it even harder. The flash effect is pretty cool though, you’ll see what you flashed for a bout a second and if you move your character the image ghosts, leaving you hoping you are going in the correct direction. Word of advice, if you’re given the option to go out in the light, chose it, the dark missions are damn near impossible, especially since you’re timed in most of the traps.

Contrary to other reviewers of this game I actually enjoyed it, I love the first 3 movies in the series and I enjoyed trying my luck at Jigsaw’s games. I wasn’t very successful with some of them, some of that could have been mine or the game’s depth perception, but I fail when giant blades come out of the wall and you have to pass by them without getting cut in half. You will get stumped in this game a bit, the puzzles to free the other victims can be pretty tough, and being timed makes them even tougher. It is worth doing it over and over though, you get to continue deeper into this asylum and finding out what Jigsaw’s endgame is this time. I would recommend this title to any horror fan, its atmospheric, scary and holds the Saw license in high regard. I think James Wan would be proud of this game, and I’m sure he’s tried his hand at it as well. If you’re looking for a game to play with friends on Halloween and everyone having a fun time either passing the controller or watching, this is the game for you. Friends can watch and enjoy and friends can attempt the puzzles until someone solves them!

Did you play Saw: The Video Game before? What did you think of it? Do you follow the franchise at all? Leave your thoughts in the comments below.

If you want more horror games, check out our review of Daymare: 1998 and our Top 8 Overlooked Horror Games.

Jigsaw makes his first appearance on consoles, but is it worthy of your time?