Just Try to Trap Your Foes 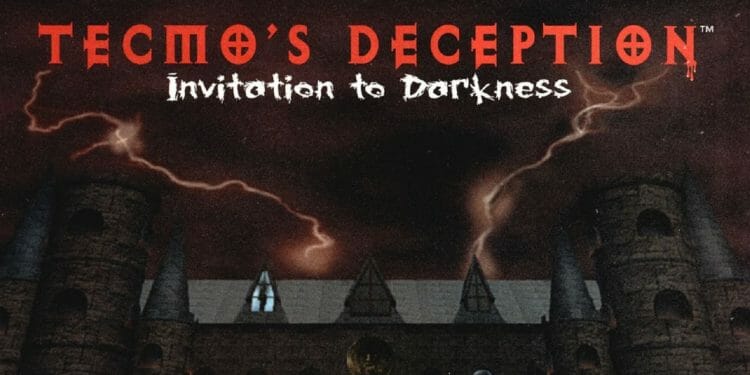 Tecmo has always had an interesting array of I.P.’s, and their Deception series is no exception. There are four main titles in the series, and one offshoot aptly named Trapt. I found out about this series years ago when I saw a video on Trapt, and I realized I would like to see where the whole thing started. The series began on the original PlayStation on July 25, 1996 in the United States, and unfortunately didn’t really take off with the masses. I can see why the first game didn’t do too well, but once Tecmo perfected the formula there is no reason why gamers shouldn’t pick up the later entries in this series. However, I would kind of steer away from the series’ first entry, Tecmo’s Deception: Invitation to Darkness, unless you like to be punished a lot.

You are the Prince of Zemekia, and you have just returned from Angelio after being engaged to Princess Fiana. You meet with your father in the throne room, who is about to tell you that you are to be named King as he is stepping down. As you speak to your father, a giant sword materializes above and impales him to the ground. Your brother rushes in, pointing out to the guards that it is YOUR sword, and has you arrested.

You are hanged as your treasonous brother becomes king. Before the gallows take you, you beg for help, any type of help. As an answer to your cries, you are struck by lightening. The Lord of Darkness answers your prayers and you awaken in the Forest of Confusion. A voice tells you to make a deal with the Devil, to be granted power over the Castle of the Damned and become the new Head of the Castle. This is how you will wreak your revenge.

The premise of this game is to use traps to lure and kill people who enter the Castle looking for the source of its power. You are given certain traps to place within rooms and masks with which to deceive the intruders. You have no sword, no weapons; just your wits and the ability to place traps where you want.

The traps are set with Soul Points which you gain when you trap a visitor. You can also trade their soul for gold. Fatal traps are available, but you need as many Soul Points as you can get so you can keep trapping these fools. As you trap people you have to be mindful; there is only one save spot, which means you cannot backtrack if you screw up. If you make a big mistake, you have to start over from the beginning, and that’s just not something you want to do.

This game is exhausting due to how old it is and what could be done with the system. Thankfully, you get a tutorial each time you have to set traps. Though the tutorial is so poorly executed–it makes you almost want to pull your hair out–repetition helps hammer the point home. The quality of graphics doesn’t help either; this game is ugly! I know people say that real beauty is on the inside, but not with this game. Worse, the ugliness makes it hard to navigate and set traps.

On top of that, this is an early PlayStation game, making the controls very hard to learn and master. I died a few times before I finally got it down, and I still didn’t really enjoy myself. First off, you cannot control the camera because this game was not made for a double stick controller; so that’s a drag. You will have to bust out your map all the time. I will say if you give this game a try using the D-Pad, it made it simpler since there are no angles.

To be honest, I would recommend you start with a later entry in the series, once Tecmo decided what they actually wanted to do with it. Deception IV is on the PS3, PS4 and PS Vita, and is a far superior game to this one. Bypass this one at least, I’m sure 2 and 3 slowly ramp up the quality but the first title in this franchise is hard to look at and hard to play. I’m glad they kept up with the series though, setting traps in a medieval castle is a blast once the mechanics are perfected. Unfortunately for me they were not perfected in 1996, and I lost several hours to this castle and it’s horrible trap setting mechanics.

Did you try Tecmo’s Deception: Invitation to Darkness when it first came out? Leave your thoughts in the comments below.

If you’re interested in more reviews, check out our articles on Clock Tower 3 and GreedFall.

Every franchise starts somewhere; sadly, this one didn't have a pretty birth.

What You Should Remember Before Buying A Chronograph Watch