"Give my regards to King Tut asshole!" 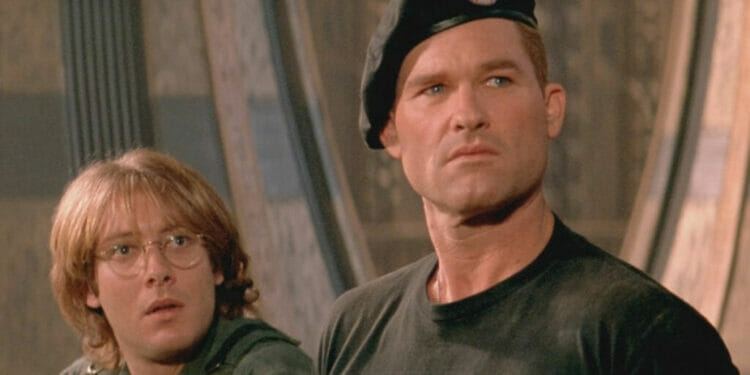 There was once a time in Hollywood when movies were unique and something that we hadn’t experienced before. This was before Disney purchased both Marvel and Star Wars and studios had to come up with original ideas to sell to the masses. We weren’t use to having a holiday Marvel movie, a holiday Star Wars movie and several summer Marvel movies. Stargate is one of those movies that I remember quite fondly from my youth.

Released in October of 1994 my first memories of the film actually take place a year or so before being released. In the early 90’s to 2000 I was lucky enough to go to the San Diego Comic Con every summer. This was before the Marvel and DC movies ruined everything and stole the convention from the actual comic books and instead made it a fan fest of sorts.

My parents and I went every year for almost a decade, and my folks kept busy by going to panels, they got to sit and didn’t have to deal with the crowds like I did. I went to get signatures and sketches from the creative staff of the comic books. We would meet up when we bumped into each other, it was generally easy to find me, I was six foot two and always in a loud Hawaiian shirt. Well this one time we met up Dad had a story, he left the panel, last as usual so as to not wait in line and found himself next to Dean Devlin (I believe). I guess my Dad and Dean, who was a producer on Stargate, just started chatting and my Dad asked about Kurt Russell (the whole household is a huge fan) and what he was up to since he was just coming off smash hit Tombstone. This is where Mom and Dad learned a little about Stargate and Soldier, both upcoming films the next few years.

Oddly enough, Stargate sticks in my head with great memories, just due to that little tidbit of comic con that I remember. Roland Emmerich would later become one of my Dad’s favorite directors due to Day After Tomorrow much later in his career. Stargate was Roland Emmerich’s second Hollywood film after wowing us with Universal Soldier. From small beginnings Roland Emmerich became one of the biggest doomsday films directors of all time.

In a time before Ancient Aliens people really didn’t know where to get their out of this world conspiracies. Yes there was Chariots of the Gods, but one can only watch that so many times. The movie ties in Ancient Egypt and how the pyramids got there etc. Basically in 1928 a young girl’s father finds something never before seen at the Giza Plateau. Jump forward to 1994 and the military is still attempting to unlock its secrets. The, now grown up, little girl enlists the help of Dr. Daniel Davidson (James Spader) to translate and activate what they found in the desert.

After about two weeks Davidson figures out the code to open the Stargate. Colonel O’Neil (Kurt Russell) has taken over the project and is about to abort with the General because there looks to be no way back should anyone enter the gate. Davidson interjects and says that once across he should be able to “phone home,” and get everyone back. They embark on their mission and soon they discover that Davidson cannot “phone home” without some more research into the planet and possible civilization.

Due to a strange stoke of luck Davidson finds civilization and is soon attempting to decipher everything, unfortunately he cannot find the 7th marker that will allow him and the soldiers to go home. While interacting with the locals, their God, RA arrives and isn’t too thrilled about the newcomers. Why RA isn’t thrilled is explained expertly with the story and I won’t spoil that twist for you.

Now, I won’t degrade the numerous television shows that followed this movie, but one of the main reasons I never watched them was because James Spader and Kurt Russell were not in the show. This was most likely due to my young naiveté, I didn’t know any better at fifteen and sixteen that the show could have been as magical as the movie.

Kurt Russell plays the perfect soldier with the perfect flattop who is haunted by his past. These demons affect his decisions during the movie and almost cost him his life. James Spader, who now mostly gets cast as the heavy, plays a perfect nerd, allergies and all. He’s the character I identified with when I watched the movie, being a huge comic book fan, an avid reader, a theatre nerd and so on. Now I kind of identify with Russell’s character, I guess life does come at you fast with tragedy and whatnot.

Seeing as this was Emmerich’s movie before Independence Day, you can catch the designer’s testing what they felt was other worldly. The “Egyptian Gods” costumes are pretty slick, if you’re a fan of Egyptian history you can tell which one is Anubis as such. Since I’ve become interested again in Ancient Egypt I was sitting there calling out who was who!

In 1994 the special effects were not what they are today, the artists really had to be imaginative to get their vision out. These artists did a great job, both digitally and with real life costumes and props. I feared that the effects would have aged poorly when I selected the title on my Roku, but they’re fresh, crisp and amazing. Emmerich picked the best people for the job and it shows, and he brought them along for the ride in Independence Day.

Sometimes, you happen to watch a movie and it seems as if they looked into the future while writing it. Stargate doesn’t have as much of the foresight than other sci-fi movies I’ve watched, but it does have a little. For those who haven’t been paying attention the government released documents that stated we had been visited by otherworldly beings. I know that COVID has been on a lot of people’s mind, but you have to sift through that to find the real news. Aliens exist and the government confirmed it. That’s pretty big news to me that wasn’t covered by any of the big three channels.

Now I’m not saying aliens built the pyramids or started life on Earth for us. But they foresaw the release of the redacted documents for public consumption. Sadly not enough people are seeing it and it is falling to the wayside. Wake up, there are aliens, they’re just avoiding us like we avoid Denny’s.

I remember when I first saw this movie over twenty years ago, I wasn’t too impressed with it. I just wanted to see Kurt Russell whup some ass and he really didn’t whup too much ass in this movie. I would have to wait until Soldier was released to watch a movie of him just beating the hell out of people. My Dad was also a bit disappointed due to a couple of story misses the movie had, I cannot reveal them because they are spoilers, but maybe you’ll see them.

Flash forward a couple of decades and I thoroughly enjoyed my time with this movie again. I don’t know if it was nostalgia that made me enjoy it or the fact that I’m an adult now and understand the nuances of the movie.

Roland Emmerich's Ancient Egypt opus is still as vibrant as it was in 1994.