A cross between Blade Runner and I, Robot 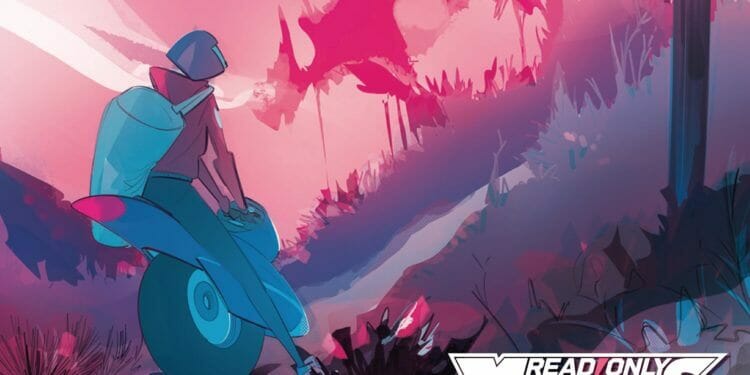 I have been reading comic books for over thirty-two years so it is hard to WOW me anymore with a new title. I feel like I’ve seen and read it all, but I was wrong. My Editor in Chief dropped a copy of Read Only Memories from IDW Publishing in my lap and I was pleasantly surprised by the uniqueness of the entire issue. Written by Sina Grace and illustrated by Stefano Simeone, both of whom I know nothing about, bring a great first issue to the stands.

After doing some research I found out the comic book takes place in the world already created digitally by 2064: Read Only Memories. This comic book tale will bridge the gap between 2064 and the soon to be released Read Only Memories: Neurodiver. The story follows a detective named Lexi Rivers in the year 2067 in Santa Cruz California where everything has become as steampunk as possible and Cyberpunk 2077 is an actuality.

You’re introduced to Lexi while she’s on the job interviewing an upper class individual that is believed to be cheating on her wife. This is where Grace’s writing chops come into play, I read the interaction between Lexi and the mark and it was so natural, so easy to read and gave a lot of insight to the world and the character we get to follow through these pages.

During the interview her cover is almost blown by a sentient robot, which we later discover have recently been given sapience. This robot later finds Lexi at her apartment and begs for Lexi to work for her. The robot is missing her human lover and doesn’t seem to know why he is missing.

Lexi asks the usual questions and feeling a little bad for the robot decided to snoop around a little bit. Lexi doesn’t want to take the case full on, but events later in the issue make sure that she is knee deep in the case now.

Grace’s writing in this comic book is superb, there are few authors that I can read without having to re read the panel before continuing on. Garth Ennis and Brian Michael Bendis also hit this list, Grace has joined it. He words flow perfectly on the page and I don’t have to wonder what she meant, she knows how to write how humans speak and it is glorious.

The artwork is also fantastic, I’ve been a big fan of Steampunk ever since I was introduced to it in the late 80’s by Bryan Augustyn and Mike Mignola in Batman: Gotham by Gaslight. While Simeone’s artwork leans more towards a futuristic steampunk look, it still scratches that itch for me.

The contrast of the rich neighborhood versus where Lexi lives, the overall look of society begs to be gazed at in awe. Even the color scheme that is placed throughout the book with the heavy pastels brings this world to life and makes it pop from the page. Even though it is a pretty depressing society, you may want to live there just to check out the architecture.

As an avid comic book collector and reader I can’t say enough how much you should buy this book! For fans of the video game, this will give you some more insight to the world you’re playing. For random comic book collectors this will scratch your unique itch for your reading pleasures. It really is an enjoyable book and I cannot wait to get my hands on #2, I need to see what’s going to happen to Lexi!

A new comic book is about to hit shelves, does it stand out from the crowd or is it the normal drivel?